Taman Sari — A swing and a miss in Yogyakarta

Posted on February 20, 2019 by theschneiduks

Some days, sightseeing isn’t all it is cracked up to be.  And, I think it is important to be honest about what sights are worth seeing and which sights simply aren’t worth seeing.  So, here goes….

One of the alleged highlights of Yogyakarta is Taman Sari, otherwise known as the water temple.  It was constructed back in the 1700’s and was used for, among other things, bathing and relaxing and, according to at least some websites, wife hunting.  Back in the day, it spread over 12,000 acres (I know that seems like a really high number, but I got it from the World Monument’s Fund website which I think is pretty reputable but perhaps not because 12,000 acres seems huge).

Now, however, other than a couple of pools, some abandoned buildings, and the underground mosque, it is pretty much gone.

The entrance to Taman Sari.

We decided to get up early and walk to Taman Sari from our hotel.  Along the way, we picked up an English teacher here in Yogyakarta who wanted to walk with us and practice his English.  We learned all about weddings in Java (guests are expected to stay no more than 20 minutes or so — they congratulate the couple, drop off a gift, eat a small snack, and go) and teacher salaries (he said that teachers at government schools make 4 million IDR — or about 285 USD — per month, which based on my research appears to be just over the minimum wage in Indonesia).  It was fun chatting with him, and that turned out to be the highlight of our visit to Taman Sari.

The pools at Taman Sari.

By the time we arrived at Taman Sari, we were disgustingly hot and sweaty and already in need of a shower.  Nonetheless, we plunged onward.  We quickly learned that the pools were quite small.  Most of the rooms were abandoned, and there were no signs explaining anything anywhere (in either Indonesian or English, so I’m not just bitching about the lack of foreign language signs).  Apparently, if you don’t hire a local guide (and plenty hang out just inside the entrance), you don’t get any information at all.

A carving on the wall at Taman Sari.

After wandering around for about 15 minutes, and getting yelled at for going the wrong way, we decided to try to find the underground mosque.  Of course, there are no signs for that either.  Thankfully, after Robert and I nearly came to blows about which direction to walk, some woman took pity on us and pointed us in the right direction.  Off we went, wandering through narrow alleys and trying to navigate with Google maps.  When we finally found the underground mosque, we weren’t that impressed.   There were people everywhere, all waiting their turn to get a photo on these steps. 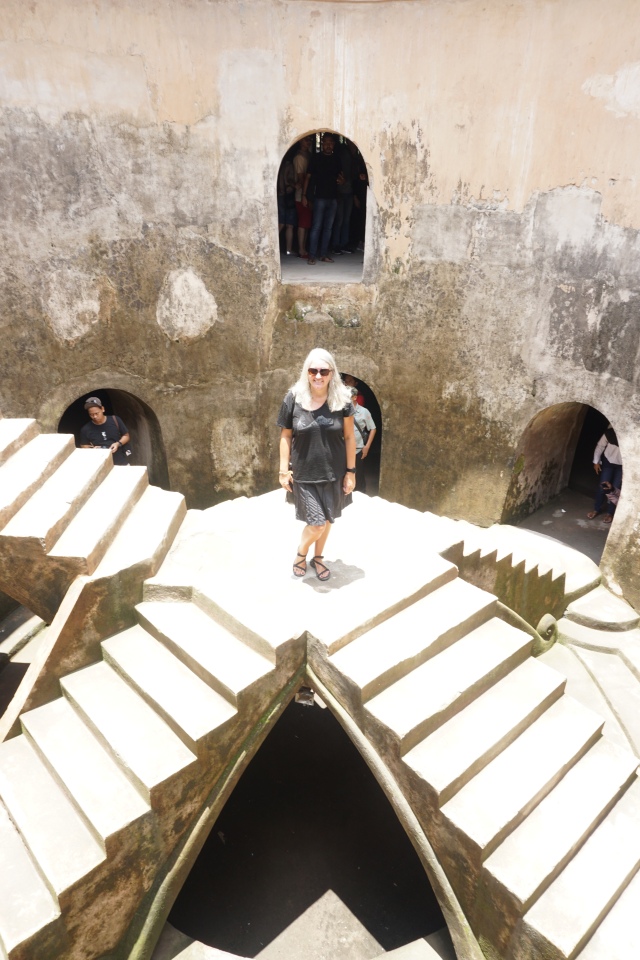 In the underground mosque.  Sorry about the overexposure but it was impossible to take a good photo here between the sunlight, the shadows, and the people everywhere (can you see them lining up to dash up the stairs?).

Bottom line, if you are in Yogyakarta, I think you can give Taman Sari a pass.  If you do go, you might want to try going as soon as they open and hitting the mosque first before the masses of people arrive.

Lisa has a degree in biology and another in law and has spent the last 20 years working as a patent litigator. She is a voracious reader of young adult dystopian fiction and watches far too much bad tv. She loves pretty much anything to do with zombies, and doesn’t think there is anything weird about setting an alarm at 6 am on a weekend to stumble to a pub to watch her beloved Chelsea boys. Robert has had many professions, including a chef, a salesman, an IT guy and most recently, a stay at home dog dad. He speaks Italian and hopes to learn Spanish on this trip. He loves nothing more than a day spent sailing, hopes to do more scuba diving, and rues the day he introduced Lisa to football (i.e., soccer).
View all posts by theschneiduks →
This entry was posted in Indonesia and tagged yogyakarta. Bookmark the permalink.