Posted on February 18, 2019 by theschneiduks

Whooo hooo!  We are in a brand new to us city (Yogyakarta, which is actually pronounced like jogjakarta by some people, apparently because the Dutch colonizers couldn’t pronounce Y or so one of our guides told us) and you know what that means?  Sightseeing!  It is about time.  We were both getting pretty tired of sitting by the pool all day.  (OK, fine, we will probably never get tired of that, but we are both eager to get out and do some sightseeing before our next two months of sitting by pools in Thailand).

Borobudur from a distance.

Borobudur is THE “must see” in Yogyakarta.

In fact, we’ve read that it is the most visited site in all of Indonesia.  Borobudur is the world’s largest Buddhist temple and a UNESCO world heritage site (and you know how we love those).  It was built in the 9th century, abandoned sometime around the 14th century, and “discovered” (yeah, right) by Sir Raffles buried under ash and jungle in the 19th century.  So we booked a car and driver to take us to Borobudur our first full day in Yogyakarta.

A closer view of the temple.

Most people seem to visit Borobudur at sunrise, which means leaving town no later than 4 am.  If you know anything about us, you know we were not down for that.  But, it is brutally hot here and visiting in the middle of the day just wasn’t an option.  So, we sucked it up and our car picked us up at 5 am.  We arrived at Borobudur just as they opened up for those people that had not paid extra for the sunrise.  There were very few people there, which was lovely.  And, we finished up our sightseeing just as the day really started to get warm. 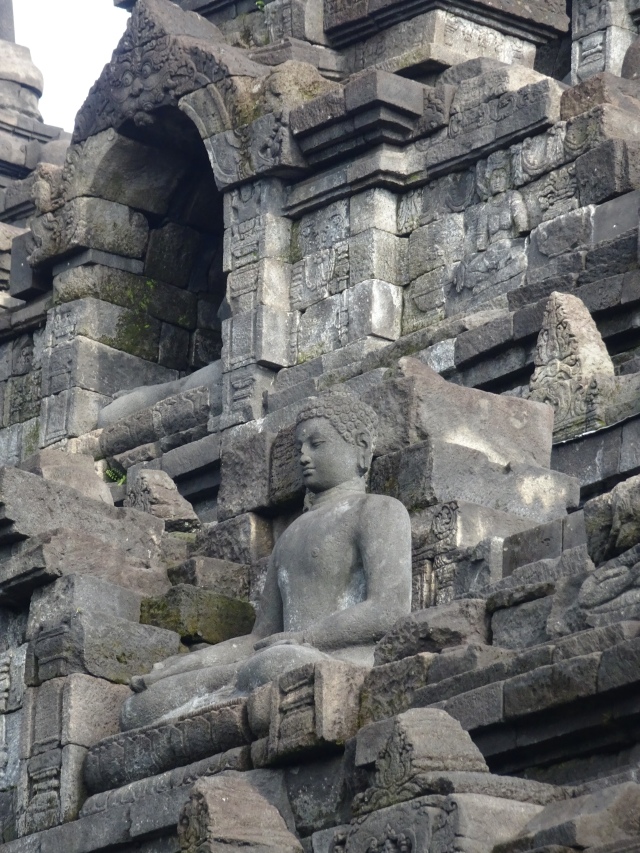 One of the more than 500 Buddhas at Borobudur.

There are several levels to Borobudur and you can walk 360 degrees around each level.  They are covered with various statues.

Statue at the base of the steps.

Statue on the walls.

And, the lower levels were absolutely covered with intricate carvings, some of which had nice pops of bright green moss growing on them. 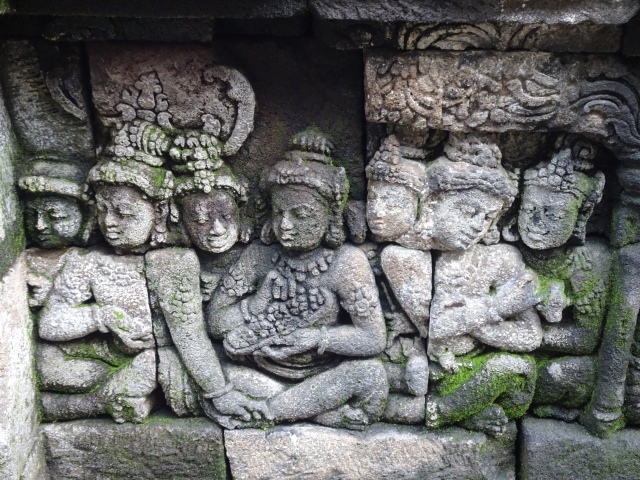 A close-up of one of the many carvings.

A wider shot of the carvings.  I love the elephants.

At the top, there are over 70 stupas, each of which contains a Buddha. 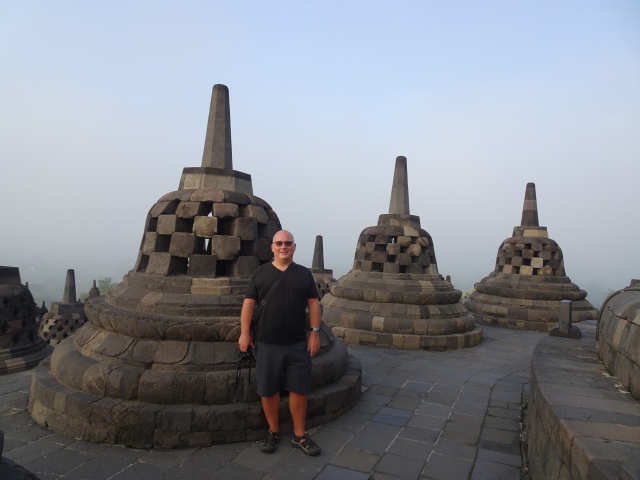 Robert with the stupas.  It was a very foggy morning.

By around 8:30, as we were wrapping up our visit, the school field trips were in full swing.  Oddly, many of the school girls wanted to take photos with me — I’m guessing I posed with 10-15 different groups of girls and we finally just had to walk away.  Some wanted to practice their English, but most just wanted the photo.  One group of school boys also wanted to pose with Robert.  I have no idea why they wanted photos with us, but apparently it is quite common.  A local we spoke to said that most of the school kids are from small villages, that they rarely see Caucasians, and they take the photos so they can say they “met” a tourist. 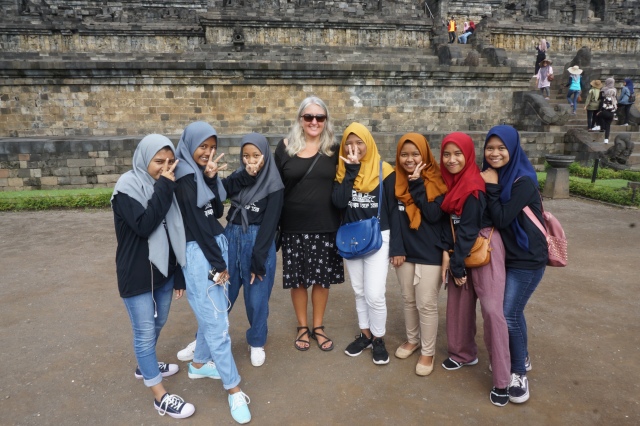 Posing with the school girls.  How they could wear long pants, and long sleeves, and head scarves in that weather, I have no idea…..  And how they make me look so huge I have no idea….

We finally rolled out of Borobudur around 9:15 and made our way to Gereja Ayam (the Chicken Church).  The story is that a Christian named Daniel Alamsjah was working in Jakarta when he had a vision to build a prayer house (he claims it wasn’t intended to be a church, but a prayer house for all faiths).  In 1989, he was walking near his wife’s family’s home, and realized the land looked just like the land he had seen in his vision.  So, he started building the prayer house.  He wanted to build something that looked like a dove but, as you can see, it didn’t quite work out that way.

The prayer house was open from about 1990-2000, but then closed.  The rumor is that the place was eventually abandoned because of lack of funding and because of conflict with the locals (who were not Christian).  But, the enterprising locals have now turned it into a tourist destination and it is open again.  I’m not sure how much praying actually happens here.  There are private prayer rooms and a main room, but there is also a cafe and weird “just say no to drugs” type artwork.

After our visit to the Chicken Church, we were off to Mount Merapi, an active volcano.  Merapi erupts frequently (every 5-10 years) and the last big eruption was in 2010 (so, yes, it is about due for another one) killing over 300 people (mostly those who had not heeded the evacuation warnings or so we were told). Our guide claimed lava was being expelled 2 km down the mountain while we were visiting, but the volcano was covered in clouds so we can neither confirm nor deny that report.

We jumped into a jeep to tour the area.  This was, unfortunately, the low light of the day and a real waste of money.  The tour stopped at three places.  First up was a “museum” which was basically just a house that had been destroyed when the volcano last erupted and filled with ruined household objects.

Posing in our jeep.

The next stop was the “alien stone.”  This is a large stone that was expelled by the volcano.  It traveled something like 7 km, and wound up in a field.  Then, it was off to a bunker where some people had died — the bunker was built to withstand hot smoke but two people got trapped in the bunker as lava flowed by and, as I understand it, basically baked to death inside the bunker. 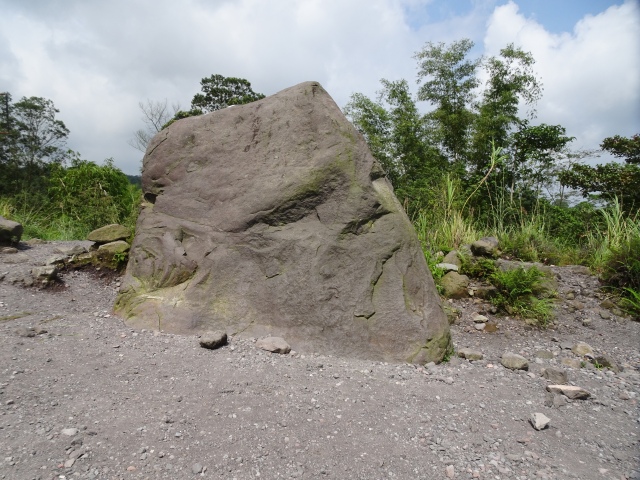 The alien stone.  It took Robert forever to see the face….And he thinks it looks more like a storm trooper from Star Wars.

The Merapi tour might have been a good tour if the weather was better and we had seen views of the volcano, but we both think you can pass on this if you visit Yogyakarta.

Lisa has a degree in biology and another in law and has spent the last 20 years working as a patent litigator. She is a voracious reader of young adult dystopian fiction and watches far too much bad tv. She loves pretty much anything to do with zombies, and doesn’t think there is anything weird about setting an alarm at 6 am on a weekend to stumble to a pub to watch her beloved Chelsea boys. Robert has had many professions, including a chef, a salesman, an IT guy and most recently, a stay at home dog dad. He speaks Italian and hopes to learn Spanish on this trip. He loves nothing more than a day spent sailing, hopes to do more scuba diving, and rues the day he introduced Lisa to football (i.e., soccer).
View all posts by theschneiduks →
This entry was posted in Indonesia and tagged off the beaten path, unesco world heritage site, yogyakarta. Bookmark the permalink.