Posted on November 8, 2015 by theschneiduks

Communa 13 as seen from the escalator

Communa 13 is a neighborhood in Medellin.  It is on a steep hill and is densely populated.  The road going to the coast travels through the neighborhood and, as you can imagine, everyone shipping anything illegal wants to be in control of that road and therefore in control of the illegal trade.

In the early 2000’s the neighborhood was under the control of left-wing guerrilla groups.  The neighborhood used to be (and, maybe, still is) filled with gangsters, drug traffickers and prostitutes.   Kids could get “rich” (1 million pesos or about $350) by killing a cop for the gangs.  And, the neighborhood used to be cut off from the rest of the city, with no available public transport and with cabs refusing to take passengers there.  As a result, it was one of the most dangerous parts of an already very dangerous city.  In fact, our guide said that, each weekend, over 100 people would be shot and killed.  (That stat positively makes Chicago look safe…).

Robert and Lisa at the top of the escalator

Eventually, the government had had enough and launched Operation Orion in October 2002.  According to our guide, the military came in one week and killed tons of people (anyone with any connection to left-wing guerrillas), trying to get control of the community.

It sounds like it was pure chaos, with one person just pointing at a house and the military then killing every single person in that house.  Nobody knows for sure how many people were killed by the government or how many people were “disappeared.”  But from the hills of Communa 13 you can still see a mass grave and they have recently started some excavation efforts to determine how many people were buried there and who they are.

And, to top it off, it sounds like after Operation Orion the area then became controlled by paramilitary groups (who did their own indiscriminate killing and disappearing). 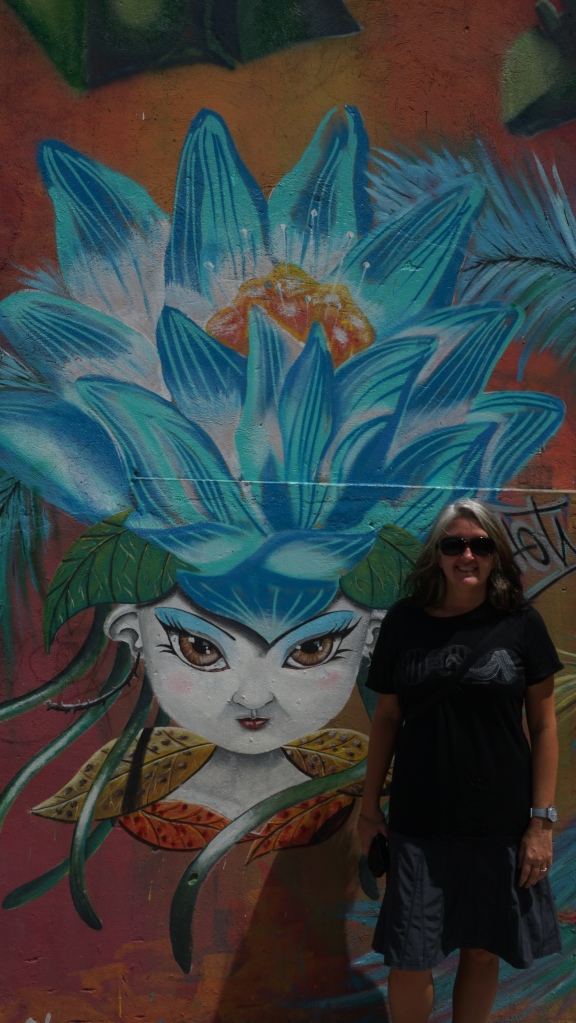 But, today, Communa 13 is a different place (or at least so everyone wants us to believe).  The government has made numerous efforts to improve the lives of the individuals living in Communa 13.  For example, a cable car now connects the area to the metro station.  In late 2011, the government installed an escalator on the hills of Communa 13.  It is 1260 feet long and it replaced something like 350 steps, making it easier for residents to come and go.  Additionally, the government built a public library in 2006 (complete with park space, free internet access and a place where kids can play).  And, residents started speaking out — apparently, the hip hop community was very vocal about stopping the violence (which, go figure, resulted in numerous hip hop artists being killed by the gangs).

I have no idea whether the improvements in the community were the result of government efforts or community efforts or a combination of the two, but the situation in the neighborhood is said to be much improved today.  Street art fills the area and the residents seemed genuinely happy to see us visiting — they even called us over at one point to let us know that a store had some sort of special mango ice (we didn’t try it, but others in our group liked it).

Sadly though, there is still serious room for improvement.  The tour we took used to include lunch at a local restaurant, but the restaurant had to close because the gangs that are still present demanded protection money from the woman who ran the restaurant….

View of Communa 13 from the cable car stop

Although the tour we took was far too expensive, a visit to the neighborhood (including a ride on the cable car and escalator) is well-worth some of your time if you are in Medellin.  And, I think the money was well-spent to ensure we had a guide who knew which areas of the community are safe.

Lisa has a degree in biology and another in law and has spent the last 20 years working as a patent litigator. She is a voracious reader of young adult dystopian fiction and watches far too much bad tv. She loves pretty much anything to do with zombies, and doesn’t think there is anything weird about setting an alarm at 6 am on a weekend to stumble to a pub to watch her beloved Chelsea boys. Robert has had many professions, including a chef, a salesman, an IT guy and most recently, a stay at home dog dad. He speaks Italian and hopes to learn Spanish on this trip. He loves nothing more than a day spent sailing, hopes to do more scuba diving, and rues the day he introduced Lisa to football (i.e., soccer).
View all posts by theschneiduks →
This entry was posted in Colombia and tagged medellin, street art. Bookmark the permalink.