When, oh when, will we learn?

Posted on November 13, 2015 by theschneiduks

Robert and I booked a group bus tour yesterday.  I have no idea why.  We tend to seriously dislike group tours, especially those that require us to get on a bus.  We could have done a very similar tour on our own using public transportation.  But no…we decided to do things the easy way and book an organized tour.  Stupid, stupid, stupid… we should have saved money and aggravation by doing this on our own…

(OK, ok, this post is going to be pretty negative.  I know that.  We were really disappointed in the tour and feel like we wasted a ton of money and didn’t even learn anything.  Plus, we have spent the last couple of hours comparing health insurance policies for next year so our grumpiness factor is higher than it has been at any other time in 2015….  But, we saw some interesting things and made the best of our day…even if we could have done it entirely on our own…).

We started the day with a 2 hour bus ride.  Big fun.

Then, we got to a town (I don’t know which one, as the guide couldn’t be bothered to tell us where we were) and crammed into the back of two pick up trucks.  Seriously, we were jammed in so tight we couldn’t move.  We certainly didn’t have room to take photos of the beautiful scenery we were passing by.  More big fun…

Finally, we arrived at one of Pablo Escobar’s old summer homes on a lake.  Where the guide disappeared for at least 20 minutes.  Seriously, she just disappeared without a word.  And left us all standing around wondering what was going on.  Pretty much everyone but us started slamming down beers; perhaps we should have joined in…it might have helped improve our moods at this point….

Eventually, the guide showed up and we toured the abandoned and destroyed house.  The guide tried to give us some information, and some of it was new to me, but Robert already knew everything she told us.  (Did you know Colombia currently has a problem with wild hippos because Escobar’s hippos escaped and started breeding after his death?  I didn’t, but Robert did).

The house must have been pretty impressive at one point.  There was the main house, the guest house, room for staff, a huge swimming pool, and a bar.  Crazy.  And, apparently, Escobar probably only visited the place a few times before he died.

Turns out the house is now used as a paintball event site.  How sad is that??? 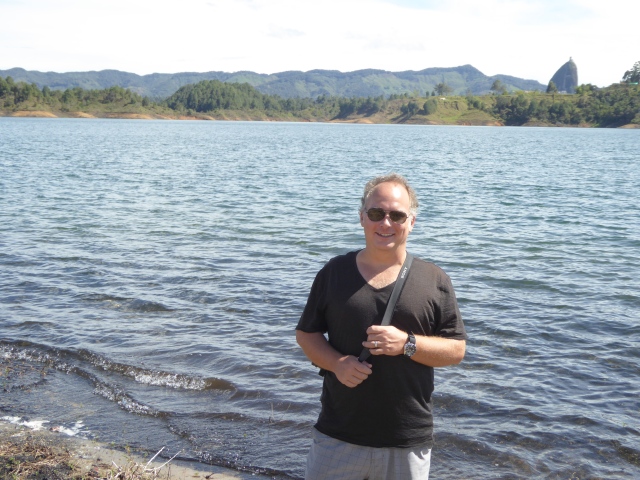 Robert on the “private island”

Then, it was time for lunch.  So…keep in mind we were in a lake district and the specialty is trout.  Indeed, as I understand it, pretty much every single restaurant in the area serves trout.  Except the restaurant at Escobar’s house.  Just chicken, beef or pork.  (Robert tells me the pork was inedible, but the chicken was ok).

Then, it was time for a boat ride.  See, the lake is man-made and an entire town was submerged when they made the lake.  When the water is clear, you can still see the roofs of the houses under the water.  And you can still see a tower jutting out of the water from the roof of the old church.  Sounds fun, right? (Note, this is the sum extent of the information the guide gave us here).

Except there were far too many people for the boat.  Seriously, the boat was barely above water, we were crammed in on every available seating space, and I got soaked on the ride.  And, when we got to where the old town was, it was 100% impossible to take photos of the tower jutting out of the water because (1) the boat was too jam-packed to move and (2) the boat made no effort to ensure both sides of the boat could even see the tower.  Can you tell we were beyond annoyed at this point????

Then, it was time for a swim break on a “private island.”  Why this was included in the tour I have no idea.  The “private island” is a piece of land that is only above water because the level of the water is low while they build a beach elsewhere.  And there are no facilities at all — no changing rooms, no chairs, no shade, no nothing.  Ugh. 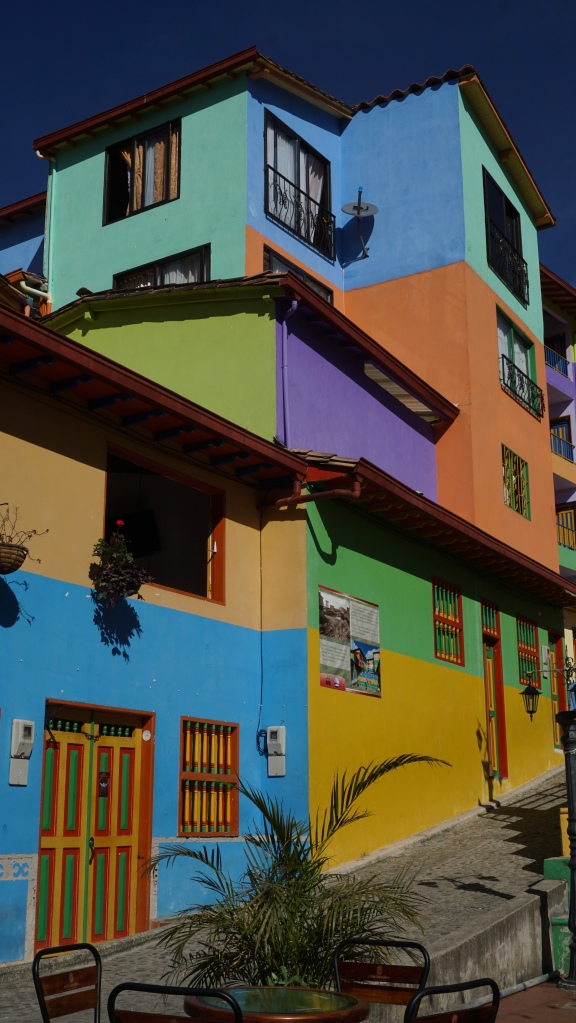 Once we escaped that hell, it was time to hit the town of Guatape.  Guatape is a really cute little town right on the lake.  Very colorful.  Very cute.  Very boring after the first 30 minutes… (Although we understand it is a huge party town on the weekends).

Then it was on to, at least for us, the main attraction.  A rock.  Yes, a rock.  Apparently, this rock was puked up by a volcano millions of years ago.  Back in the 50’s, some idiots decided to climb it.  It took them five days.  But, once they saw how incredible the view was, they decided to build steps up the rock so others could climb it.  There are now over 750 steps up to the very top.  (Note that every single web site lists a different number of steps.  I saw 750 painted near the top so am confident that “over 750” is an accurate enough number). 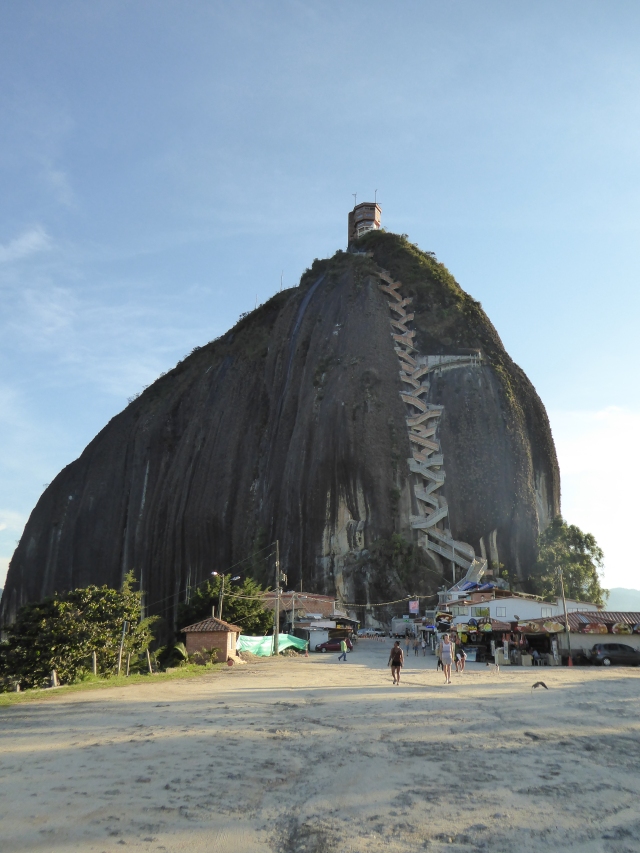 So, we started climbing.  Up and up and up and up.  At one point, I thought this was going to be the time I was going to have to cry uncle.  (I’m guessing my bout with a stomach bug the day before, resulting in me eating nothing but saltines, had something to do with it).  But, we made it.  And the views were so worth it!

After hanging up there for awhile, we decided to head back down.  Keep in mind, our guide did not come up the rock with us and did not tell us when to be back.  But, she was fuming that some people returned later than she would have liked.  Hmmmm….you think giving your tour group a deadline to return might have helped with that??

We finally made it back to town, where we were able to combine two of my favorite activities.  Watching football (Chile v. Argentina) and sitting in an Irish pub.  It was so much fun — every single bar and restaurant had the game on, people were milling about everywhere, and it was a blast.  Can’t wait for the Colombia v. Argentina match on Tuesday!

The view from the top of the rock

Lisa has a degree in biology and another in law and has spent the last 20 years working as a patent litigator. She is a voracious reader of young adult dystopian fiction and watches far too much bad tv. She loves pretty much anything to do with zombies, and doesn’t think there is anything weird about setting an alarm at 6 am on a weekend to stumble to a pub to watch her beloved Chelsea boys. Robert has had many professions, including a chef, a salesman, an IT guy and most recently, a stay at home dog dad. He speaks Italian and hopes to learn Spanish on this trip. He loves nothing more than a day spent sailing, hopes to do more scuba diving, and rues the day he introduced Lisa to football (i.e., soccer).
View all posts by theschneiduks →
This entry was posted in Colombia and tagged medellin. Bookmark the permalink.