If you are visiting Isabela Island, one of the “must do’s” is a day trip to Los Tuneles, a collection of small islands formed ages ago when one of the many volcanoes on Isabela erupted.  As a result of the eruption, lava ran down into the ocean.  The outside of the lava eventually cooled and hardened, while the inside remained hot and continued running into the ocean, resulting in lava tunnels.  Eventually, the tunnels collapsed and formed some small islands.  The water surrounding the small islands is filled with fish and turtles and the islands are home to blue footed boobies.

We booked our tour through Pahoehoe and paid $120 per person, which is cheaper than anything we saw on-line, but I’ve read you can get it for $100 at times.  The best thing about the tour (I only sort of jest) is that it didn’t start until 11 am.  Sleeping in on the Galapagos is a bit of a luxury, trust me.  Robert was even calling the Galapagos the “get up early and go” islands for awhile.

The day started with a short truck ride to the pier, where we boarded a nicely maintained boat.  The tour was full, but the boat was still comfortable for (I think) everyone.  Immediately upon departing, we were handed some sort of chocolate cracker treat.  It was yummy, but the use of single serving packaged goods on a snorkel boat (especially in the Galapagos) was a bit odd (although, as it turns out, par for the course in the Galapagos). 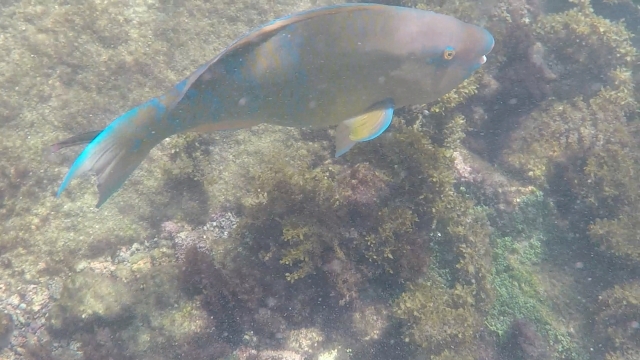 A colorful fish at Los Tuneles.

After about 45 minutes or so of bouncing through the waves (and spotting at least 6 turtles and a giant manta ray as we sped along, none of which our naturalist pointed out or even seemed to care about), we came across a small island called Union Rock in the middle of nowhere.  It was beautiful, full of birds and even some sea lions, but absolutely covered in bird poop.  After everyone got a chance to take photos, we were off for another short boat ride. 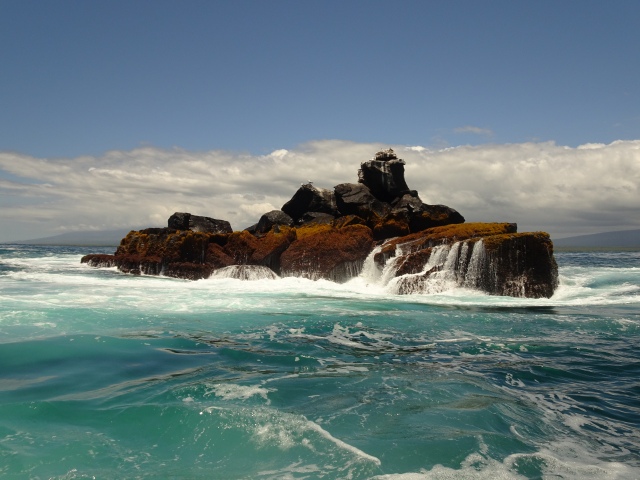 Union Rock.  Beautiful from a distance, although not so much when you can see all the bird poop.

Getting into the Los Tuneles area is a bit of a challenge.  The waves were huge and crashing around us and the boat captain had to time the entry just right.  But, it was worth it, because the first thing we saw was a Galapagos penguin.

Me squinting in the bright sun and swimming (ok, floating) near a penguin.

After a quick lunch on the boat (what is it with chicken in mushroom sauce in the Galapagos????), it was time to hike on the tunnels.  Wear good shoes.  The lava is crumbly and uneven and, if you balance yourself on a cactus instead of falling over, it is going to hurt.  Trust me, I know this from experience….

I really liked this guy, who was building a nest under a shrub.  Apparently, male blue footed boobies don’t get to mate until they can show the female a nice nest for her eggs.  His feet aren’t very blue because he has been spending too much time nest building and not enough time eating.  Hopefully, he has found a mate by now and his feet are bright blue.

Once the hike was over, we climbed back on the boat for two rounds of snorkeling.  The first was a deep area at the entrance to Los Tuneles.  It wasn’t the best.  Mainly because our naturalist was not very good.  I swear he thought snorkeling was supposed to be about how fast and how far you can swim, instead of an enjoyable time in the water.  As mentioned above, we did get up close and personal with the penguin though.  And, we got to see a sea horse.  So, that was beyond cool (well, except for the fact that everyone was crowding around and kicking each other trying to spot such a tiny little thing).

A sea horse on Los Tuneles.

The second snorkel spot was in a shallow location with very murky water made worse by idiots who kept kicking up sand with their fins.  But, we saw so many turtles!  We probably saw 8-10 turtles and they were close enough to reach out and touch (not that we did that, of course).  But, once again, the guide thought snorkeling was a competition sport so it wasn’t the best snorkel we have ever had.  Still, turtles!

A turtle.  Yep, it really was that close.  We had to get out of its way.

On the way back to shore, we were served Oreos in yet another single serving package.  I just don’t get it….

Lisa has a degree in biology and another in law and has spent the last 20 years working as a patent litigator. She is a voracious reader of young adult dystopian fiction and watches far too much bad tv. She loves pretty much anything to do with zombies, and doesn’t think there is anything weird about setting an alarm at 6 am on a weekend to stumble to a pub to watch her beloved Chelsea boys. Robert has had many professions, including a chef, a salesman, an IT guy and most recently, a stay at home dog dad. He speaks Italian and hopes to learn Spanish on this trip. He loves nothing more than a day spent sailing, hopes to do more scuba diving, and rues the day he introduced Lisa to football (i.e., soccer).
View all posts by theschneiduks →
This entry was posted in Ecuador and tagged galapagos islands, isabela island, nature photography. Bookmark the permalink.