After two quiet nights in Negombo, it was time to make our way to Dambulla.  Now it seems that most folks who come to Sri Lanka do things the easy way and hire a car and driver to schlepp them all around the country — I’m guessing we could have found a driver for a one-way trip for around $75 or so.  Have we done anything the easy way on this trip?  Of course not…

We really climbed this. Really.

So, we decided to travel from Negombo to Dambulla by bus.  Because the price of the bus was way cheaper than hiring a driver.  How much cheaper?  The total cost for the bus was under $3. Yeah, I think that makes it worth foregoing a driver.

Talk about an experience.  We made our way to the Negombo bus station via tuk-tuk and then wandered around until we found a bus that said Kurunegala on it and jumped on board.  I know what you are thinking.  Kurunegala doesn’t sound like Dambulla.  Nope — turns out we had to transfer.  So, anyway, we jumped on the bus and waited a bit.  Buses here do not really run on a schedule.  Bus operators will often wait around and see if the bus fills up.  Once the bus was sufficiently full, the bus left.  Of course, what we didn’t realize — but certainly should have realized — is that even though we were on a cross-country bus, the bus stops as frequently as your average city bus.  In fact, I’m pretty sure the bus will stop anywhere and everywhere someone flags it down.  And the doors never close.  And there are generally people hanging from the doors.  And the Sri Lankan music blares out of speakers for the entire trip.  But, at least there were no chickens on the bus!  Three hours later (to cover a mere 70 or so kms) we arrived in Kurunegala.  Then, we wandered around that bus station looking for a bus that said Dambulla.  Only problem was about half of the buses only had signs in Sinhala and I can’t even identify letters in that language!  Never fear, soon word got out that the crazy tourists were looking for the Dambulla bus and a bunch of touts were eager to lead us to the correct bus.  Again, away we went and a couple of hours later, we had made it to our hotel in Dambulla.

After a night’s sleep, we made our way at the break of dawn to Sigiriya by — you guessed it — bus.  Sigiriya is a big, huge rock, but it is also a UNESCO world heritage site.  Robert tells me the rock is a giant plug in an ancient volcano that no longer exists.  Wiki tells me the rock is the site of a former royal palace.  Other sources claim it is the site of an old Buddhist monastery.  Perhaps all of these things are true. 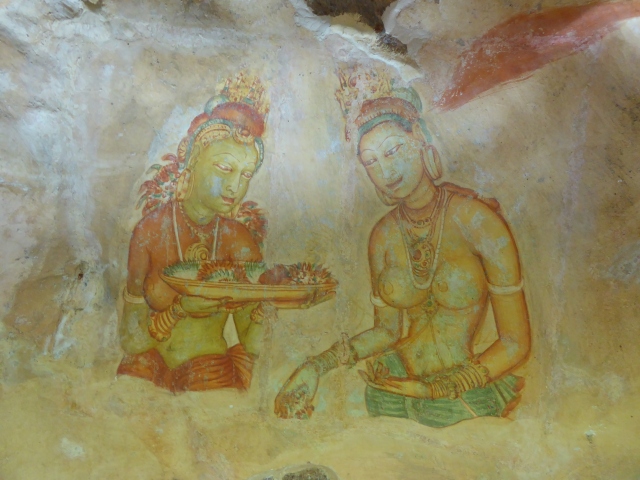 The slog up Sigiriya starts by walking along some gardens.  A nice relaxing walk.  But pretty soon you are going up stairs.  Lots and lots and lots of stairs.

Along the way, there is a cave with frescoes from centuries ago.  Nobody knows for sure who the woman are — could be the king’s wives, could be concubines, could be people engaged in religious practices.  What I do know is that apparently the women didn’t wear shirts back then.

There are also some fun signs along the way.  Sadly, I never came across the sign I read about warning people that there are crocodiles in the garden pond.  But we did see the sign warning against hornet attacks (and we also saw the cages you are supposed to run into if attacked by a swarm of hornets) 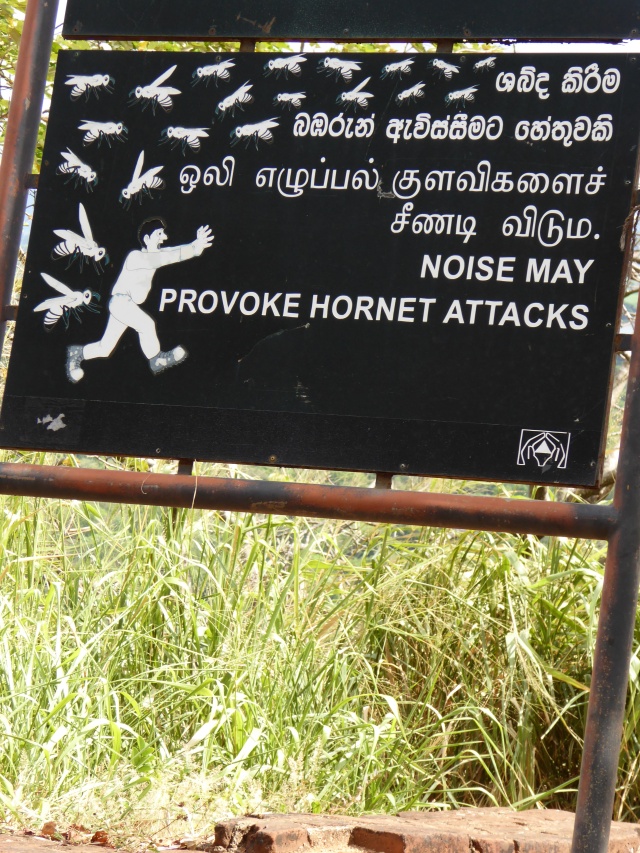 There really were huge hornets nests….

We also saw this sign.  I’m really not sure what it was trying to say …

After the fun of the frescoes and the signs, and after I was already huffing and puffing, we were faced with this — the final slog:

And here we thought we were almost at the top. Wrong!

Yeah, more climbing.  But it was worth it.  The views were amazing once we got to the top.

On top of Sigiriya 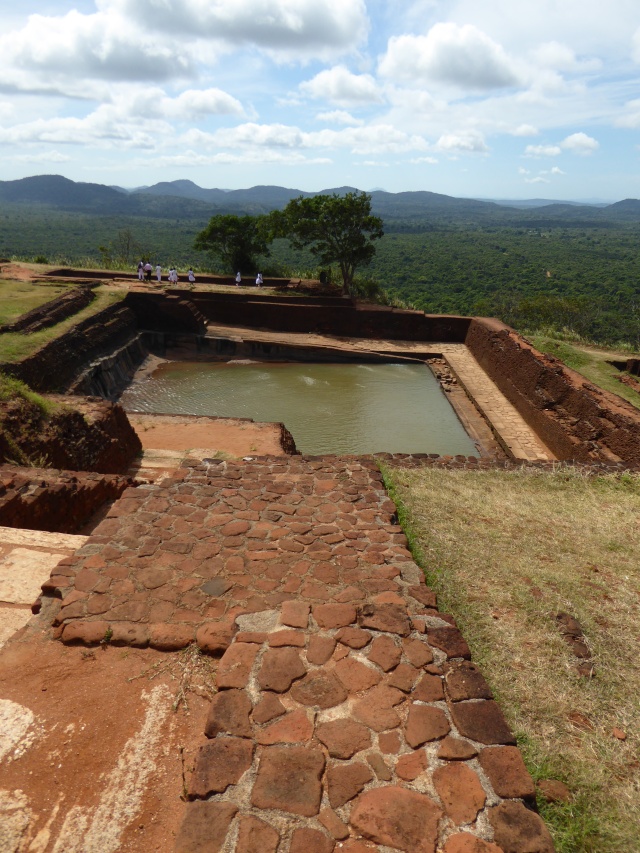 The swimming pool of ancient kings

On top of Sigiriya 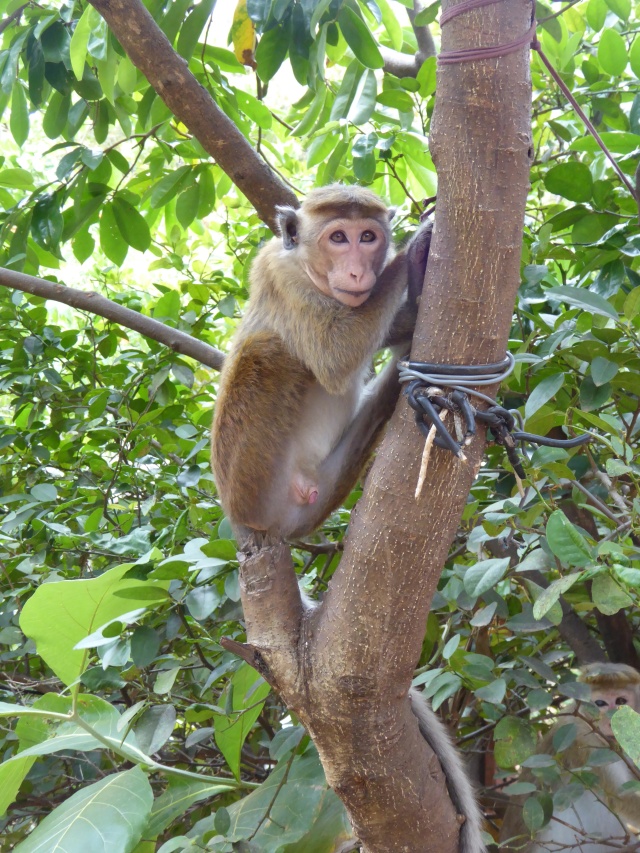 After climbing all the way to the top and then back down, we treated ourselves to a nice local lunch.  I had a dish you can find on pretty much any menu in the country — chicken curry with rice.  I’ve already had it 4 times and it never tastes the same, but it is always good.  Robert on the other hand decided to try the “short eats.”  Basically, they bring a big platter of different types of fried and breaded yumminess (think samosas and the like) — you eat what you want, they bill you by the piece, and the rest go back in the case for the next customer.  Seriously.  Slightly different health code standards here…But, for $3 for lunch for two, who can complain?

Lisa has a degree in biology and another in law and has spent the last 20 years working as a patent litigator. She is a voracious reader of young adult dystopian fiction and watches far too much bad tv. She loves pretty much anything to do with zombies, and doesn’t think there is anything weird about setting an alarm at 6 am on a weekend to stumble to a pub to watch her beloved Chelsea boys. Robert has had many professions, including a chef, a salesman, an IT guy and most recently, a stay at home dog dad. He speaks Italian and hopes to learn Spanish on this trip. He loves nothing more than a day spent sailing, hopes to do more scuba diving, and rues the day he introduced Lisa to football (i.e., soccer).
View all posts by theschneiduks →
This entry was posted in Sri Lanka and tagged unesco world heritage site. Bookmark the permalink.