Moving on to Dalat

Posted on April 2, 2015 by theschneiduks

We finally dragged ourselves away from Ham Tien after eight glorious, sun-drenched, lazy days.  It was time.  The season had ended. 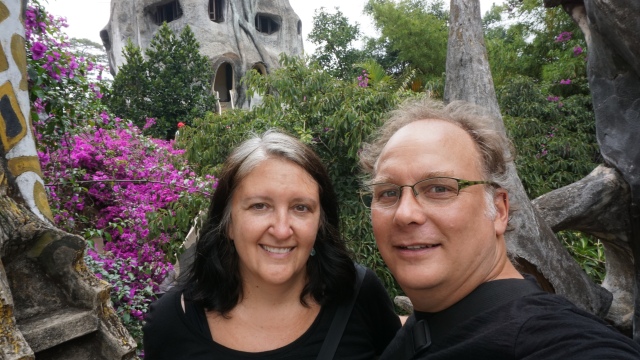 Check out that gray!

Literally overnight.  One day the wind was blowing in, lifting the colorful kite boarders into the air; the next it was still and there wasn’t a kite boarder in sight.  One day, the beach was walkable from VKS (our favorite breakfast/lunch joint because it was right on the water) down to the main beach; the next day the beach at VKS had completely washed out to sea and the VKS foundation was in peril.  (Apparently, the beach erosion is a yearly occurrence; some of it comes back but not all leaving less and less beach each year). 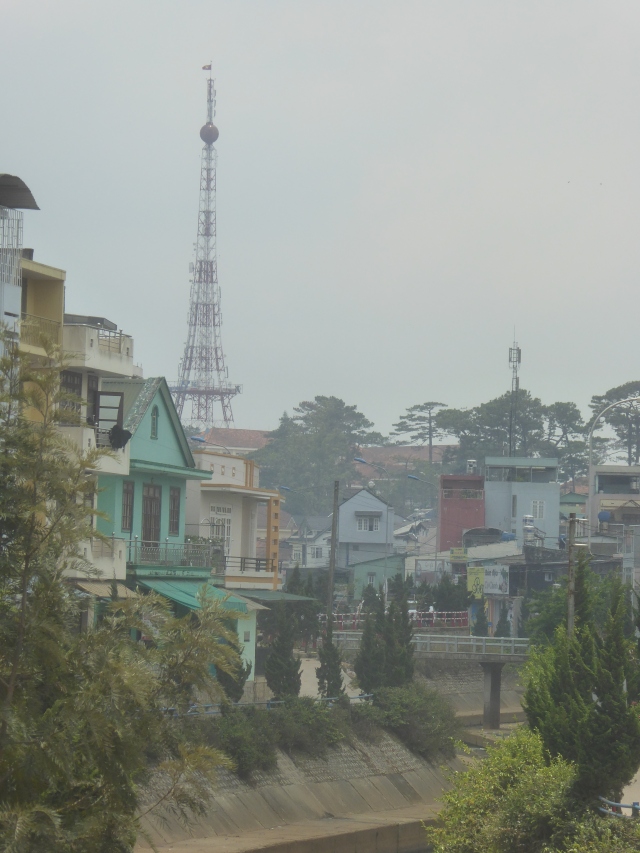 So, after our days of relaxation, we braved yet another Vietnamese bus.  This time, the bus was fine.  The roads and the driver were not.  As we made our way from the sea to the mountains along narrow roads with hairpin turns, we quickly learned our driver had no understanding of how to drive a manual transmission.  His stubborn refusal to shift gears was a sight to behold — he would climb hills going 5 km/hr in 4th gear and then scream down the other side in third gear at 30 km/hr with the engine protesting the whole way.  The road was also quite the sight.  For reasons unknown, the road was being torn up.  Intentionally.  Huge holes were being dug on both sides of the road.  So back and forth we went, looking for smooth pavement.  Not always possible to find.  Never fear, our trusty bus driver would ease the front tires into the hole, stop, shift into first gear, and then continue.  At one point Robert had to move seats as he was getting tossed into the air. 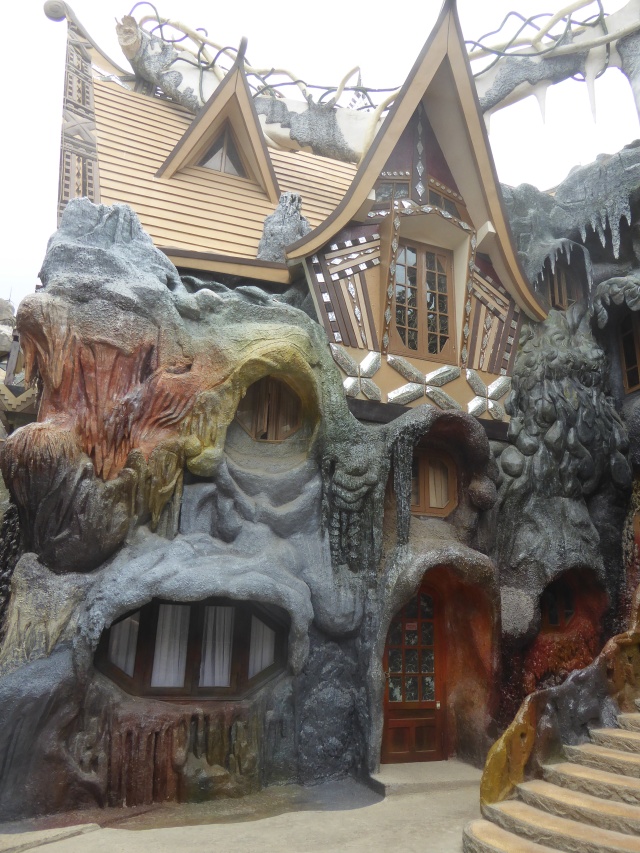 But, as usual with only a little wear and tear we eventually made our way to Dalat and found our hotel.  Which just happens to be right across from the street from a very popular bakery.  Guess where I have been three times in 24 hours???

Dalat is in the southern part of the central highlands of Vietnam.  It has a population of roughly 200,000 people and has a much more temperate climate than Saigon (thus resulting in the nickname “the city of eternal spring”).  It also has quite a bit of French influence (resulting in another nickname “Le Petite Paris”).  Today we saw a miniature Eiffel Tower and a Moulin Rouge restaurant (interestingly, a whole tour bus of monks clad in orange robes were having lunch there). Dalat is known for many things, including flowers, coffee and wine.

We have had numerous bottles of Dalat wine and like to say “no two bottles taste the same, but they all taste bad.”  But we had a hypothesis — we thought perhaps that Dalat wine would taste better if purchased closer to the source.  You know, no transportation along bumpy roads in the hot sunlight.  So our first night we went to a local grocery and bought a bottle of white white (they don’t have anything fancy like pinot grigio — just white and red).  The nice man who owned the store even opened it for us as we did not have a corkscrew.  However, the fact that the white wine was not refrigerated should have been our first clue that our hypothesis was wrong.  Turns out that at least white Dalat wine is bad even here.  I didn’t even finish a glass.  At least we weren’t out too much money — the bottle cost a whopping $3.24.

Unfortunately, rain was in the forecast yesterday so we didn’t get to do much before we had to escape a downpour by jumping into a cafe.  But we did go to what has to be one of the most kitsch places in all of Vietnam — The Crazy House.  It is basically a giant tree house made of wood and wire smoothed over with concrete and it also functions as a hotel.  Each room has a theme — the eagle room, the bear room, the kangaroo room, etc.  The woman who built it is a trained architect and the daughter of a former president of Vietnam.  And, like everything else in Asia, it is just a little bit unsafe — high, narrow walkways without much in the way of handrails, various construction equipment sitting around, etc.  But, it was a fun way to spend an hour to two.

And then, Robert had his belly patted.  I kid you not.  We were looking for lunch and walked by a local restaurant with plenty of Vietnamese inside.  No menu other than a sign out front with a few dishes we recognized and like.  So, we decided to go in.  As we were walking in, a man coming out of the restaurant reached out, patted Robert’s belly, and gave him the thumbs up sign.  That was all the encouragement we needed (and it turns out the food was quite good). 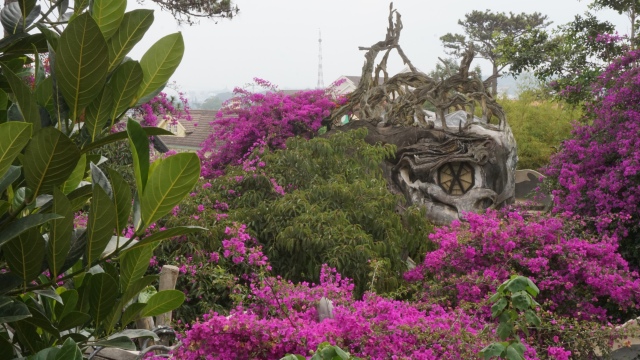 Tonight we had another food adventure.  I had read a review of a local restaurant that mentioned a complete lack of tourists and a complete lack of regard for health and safety standards, and I was hooked.  So, off we went to Quan An Cu Duc, a traditional Vietnamese BBQ joint.  The menu — which was not translated very well and often didn’t make much sense — has a variety of meats, including deer, porcupine, and crocodile.  You cook the meat yourself on a roof tile placed over a bed of coals in the middle of the table while drizzling oil over everything — the tile is at an angle so the oil keeps everything moist while running back down into a bowl.  Sounds good, right?  Well, Robert loved it, particularly the duck sausage and the morning glory (a vegetable) with garlic.  Me, not so much.  I truly thought we had ordered correctly.  I was wrong.  We got a three-in-one platter with goat, “chicken plucked” and pork.  I had no intention of eating the goat, but Robert loves it.  Turns out the “chicken plucked” consisted only of chicken skin, hearts and livers.  So, I didn’t eat that either.  And the pork still had the skin attached.  So in the end, I had only a few mouthfuls of pork (eating around the skin), along with a rice cake and peanuts.  Nonetheless, it was a good time.  And, more importantly, we discovered something.  It turns out that red Dalat wine in Dalat is actually good and goes quite well with BBQ.  Who knew?  I may turn into a drinker of red wine…

Lisa has a degree in biology and another in law and has spent the last 20 years working as a patent litigator. She is a voracious reader of young adult dystopian fiction and watches far too much bad tv. She loves pretty much anything to do with zombies, and doesn’t think there is anything weird about setting an alarm at 6 am on a weekend to stumble to a pub to watch her beloved Chelsea boys. Robert has had many professions, including a chef, a salesman, an IT guy and most recently, a stay at home dog dad. He speaks Italian and hopes to learn Spanish on this trip. He loves nothing more than a day spent sailing, hopes to do more scuba diving, and rues the day he introduced Lisa to football (i.e., soccer).
View all posts by theschneiduks →
This entry was posted in Vietnam and tagged dalat. Bookmark the permalink.