Posted on February 6, 2015 by theschneiduks

Whoo hooo!  We have internet access.  Kind of, sort of.  It is very slow (remember dial up speed?), but we both needed some downtime after walking miles and miles around Mandalay over the last two days.

Neither of us has figured out how we feel about Mandalay yet.  It is very much a study in contrasts.  There are scenes of absolute beauty, yet right down the river people are throwing their trash, washing their clothes and bathing in the exact same spot in the river. 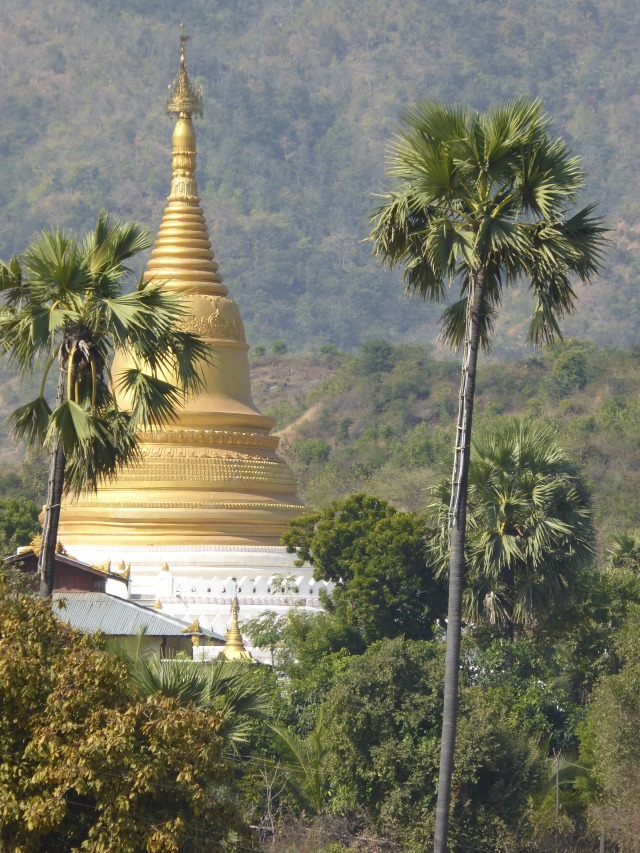 Cattle are still used to pull carts and old men pedal bikes loaded down with market items, while Mercedes cars drive down the same road. (Traffic here is a sight to behold.  There are very few traffic lights and I’m pretty sure the only rule is that the biggest vehicle wins.  If you are driving a truck and you want to turn left, go for it so long as the only thing coming towards you are cars, scooters, bikes and people.)

Poor men shower on the street at public showers on busy downtown street corners (thankfully, they keep their longhis on while doing so), while McMansions are being built down the block.

Locals stare at us and little kids practice their hellos on us because tourists are still somewhat of a novelty, while at the same time the people trying to sell postcards and other knick-knacks are already annoyed that most of the tourists aren’t buying anything.

There is very little infrastructure (see the crack we had to jump over to get off our ferry boat), 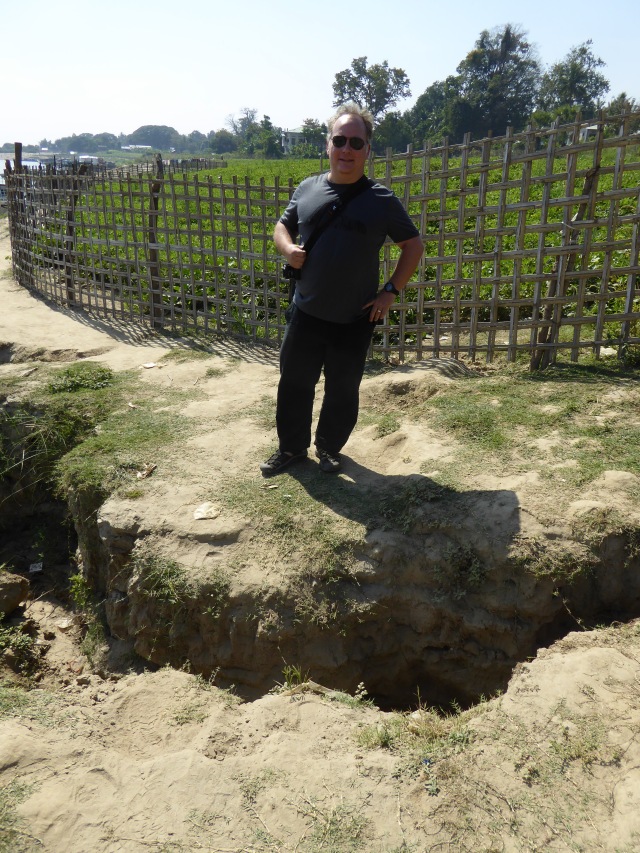 yet pagodas that are over 100 years old have Buddhas with what can best be described as disco lights behind their heads.

It is a strange, strange place and I’m not sure if we are here at the right time or if we are already too late to see the “real” Myanmar (to the extent a tourist ever can see the “real” anything).  Don’t get me wrong.  We are really glad we visited, but it is just a strange, strange place.  We did a fair amount of research before we decided to come here and people fell into two camps:  some hated it and advised people to spend as little time as possible and others said it grows on you.  I think we are firmly in the “it grows on you” camp, but can see why some people don’t like it.

Lisa has a degree in biology and another in law and has spent the last 20 years working as a patent litigator. She is a voracious reader of young adult dystopian fiction and watches far too much bad tv. She loves pretty much anything to do with zombies, and doesn’t think there is anything weird about setting an alarm at 6 am on a weekend to stumble to a pub to watch her beloved Chelsea boys. Robert has had many professions, including a chef, a salesman, an IT guy and most recently, a stay at home dog dad. He speaks Italian and hopes to learn Spanish on this trip. He loves nothing more than a day spent sailing, hopes to do more scuba diving, and rues the day he introduced Lisa to football (i.e., soccer).
View all posts by theschneiduks →
This entry was posted in Myanmar. Bookmark the permalink.