Things to do on San Cristobal Island, Galapagos*

After five lovely days on Isabela Island, it was time to head to San Cristobal Island.  We couldn’t take the teeny tiny plane, as we had too much luggage.  So, it was back to the ferry for us.  And, because when we planned our trip there were no ferries between Isabela and San Cristobal, that meant we had to first go back to Santa Cruz and then go to San Cristobal.  (There might be a direct ferry when the Galapagos Islands reopen.  We saw some ads for one on Isabela.  But, after covid, who knows.) 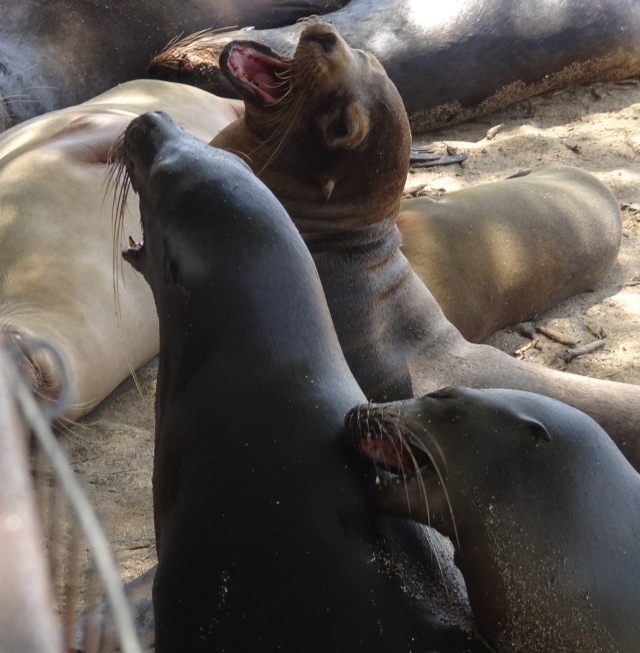 There was no way I was taking two ferries in one day, so we spent a night in San Cristobal.  And, it is a good thing we did as both ferries were pretty bumpy and I think I would have been puking my guts out if I tried to do them in the same day.  Dramamine can only do just so much….

There were hundreds of sea lions on the beach.

Arriving on San Cristobal, the first thing we noticed (well, after getting our temperature checked for the first time due to the covid outbreak) were the sea lions.  There are hundreds, if not thousands of them, around town.  Watching the sea lions became one of our favorite ways to pass the time.  During the day, you can find them lounging on rocks soaking up the sun.  I have no idea how lying on volcanic rock can be comfortable, but apparently – at least to sea lions – it is.  In the late afternoon, the sea lions tend to congregate on a beach just west of the main pier.  The young ones love to play in the waves.  We saw them “surfing” waves.  We saw them somersaulting end over end as the waves carried them to shore.  And, we saw them rolling back and forth in the waves.  It was so much fun to watch. And, boy, do they remind me of dogs!

Other than the sea lions, we weren’t so impressed with San Cristobal (although Kicker Rock is amazing — more on that in the next post).  We spent some time on Playa Mann.  It is a small little beach.  There wasn’t much in the way of amenities (oh, how I miss my lounge chairs) and there wasn’t much to see in the water, but there were some playful sea lions worth watching.  You know what is the funniest thing about them?  They have totally learned that humans won’t touch them.  If a sea lion wants your spot on the beach, well, you better give it to them.  They will barrel right up to wherever they want and expect you to get out of their way.  And, they like to play with humans.  We saw one man taking a photo of a big sea lion.  While the man was completely entranced by the big sea lion, a smaller lion sneaked up behind the man and stuck its nose into the back of the guy’s knee.  You could practically see the sea lion laugh as the guy jumped in fear.  (We laughed too.)

We also spent some time on Playa Carola.  Again, no amenities and also no shade.  We had read the snorkeling was good at Playa Carola.  And, perhaps it is.  There were tons of fish in the water (one even nibbled on me), and Robert saw two turtles.  But, when we went, visibility was bad, the waves were bad, the currents were bad, the water was insanely shallow, and I got thrown up against the rocks more than once.  So, perhaps this snorkel spot is for stronger swimmers than I.  Or, perhaps we went when the tide was wrong.  We will probably never know….

This sea lion was tuckered out.

San Cristobal was probably our least favorite of the islands we visited in the Galapagos.  I’m not sure why, as many people love it.  Part of it is because most of the food was bad (although we did find one place with consistently good food — we don’t remember the name but if you walk from town to the naval base, it is basically right where you turn right — and one good bar with football on the tv (Midori).   Part of is because the wifi was the worst we experienced on the islands (and that is saying something).  And, part of it no doubt is because covid was just becoming a thing when we arrived.   Almost all of our conversations with other travelers revolved around covid and its impacts.   Over and over, we talked about whether we needed to try to get off the islands sooner than planned, about which countries were still open, about where to go, about which flights had been cancelled, etc., etc.  So…not our favorite island.

Lisa has a degree in biology and another in law and has spent the last 20 years working as a patent litigator. She is a voracious reader of young adult dystopian fiction and watches far too much bad tv. She loves pretty much anything to do with zombies, and doesn’t think there is anything weird about setting an alarm at 6 am on a weekend to stumble to a pub to watch her beloved Chelsea boys. Robert has had many professions, including a chef, a salesman, an IT guy and most recently, a stay at home dog dad. He speaks Italian and hopes to learn Spanish on this trip. He loves nothing more than a day spent sailing, hopes to do more scuba diving, and rues the day he introduced Lisa to football (i.e., soccer).
View all posts by theschneiduks →
This entry was posted in Ecuador and tagged galapagos islands, nature photography, san cristobal island. Bookmark the permalink.

1 Response to Things to do on San Cristobal Island, Galapagos*