While visiting Santa Cruz, we knew we wanted to take a day trip or two.  North Seymour had not been on our list of possible day trips (I can’t for the life of me remember why we had discarded the idea of going there), but when it ended up making the most sense to go there (you know, schedules and cost and availability), away we went.  And, you know what?  It was so worth it!

We started our day with a drive to the port near Baltra (the same one the ferry takes you to after flying in).  Then, we had a short 35 minute or so cruise out to North Seymour.

North Seymour is the nesting ground for frigate birds, blue footed boobies, swallow-tailed gulls, and land iguanas.  Once we arrived, our naturalist led us around a fairly well defined path and pointed out the birds and lizards.  We actually spent two full hours on North Seymour and, while it was unbelievable hot (seriously, bring lots of water because you will sweat it all out — I’m talking sweat dripping down your face and right off the tip of your nose hot), it was pretty amazing.

A colorful frigate bird on North Seymour Island.  It was cool to see them on the ground, as we are much more used to seeing them far overhead.

The young frigates were practicing their flying skills in the ocean breezes.  They would pretty much just hover in the air, riding the currents.  At times, they flew within a few feet of us. It was amazing.  Frigates are Robert’s favorite bird, so he was pretty psyched to see them up close.

A frigate bird gliding on the currents.

Even younger frigates were sitting in nests begging for dinner.  Hello…talk about adorable…. 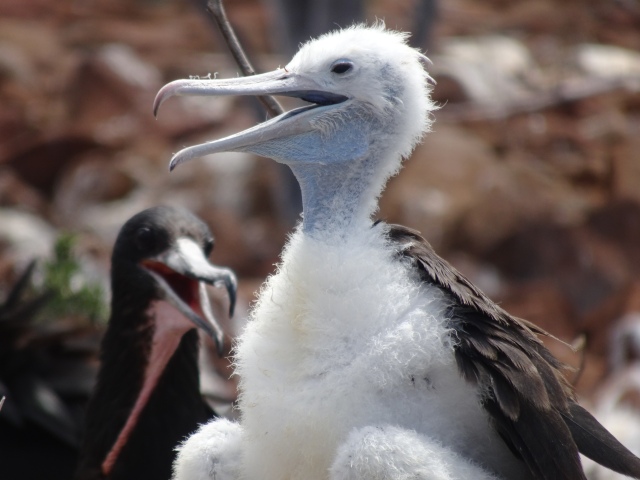 Male frigates were looking for mates.  Apparently, size matters in frigate land, as the larger and brighter the neck pouch, the more likely the male is to find a mate. 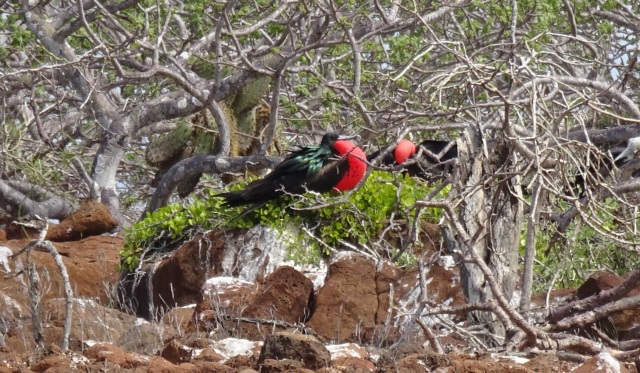 Blue footed boobies were taking care of their eggs. 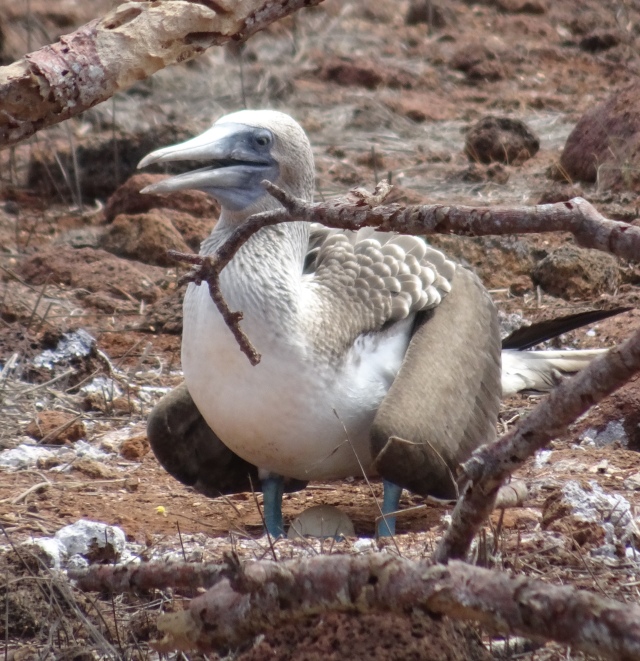 A blue footed boobie with an egg.

Blue footed boobies were taking care of their young.

Mama and baby boobies on North Seymour Island.  There are actually two babies here.  (See below for a better view.)

A boobie on the seafront.

And, the huge land iguanas were everywhere. 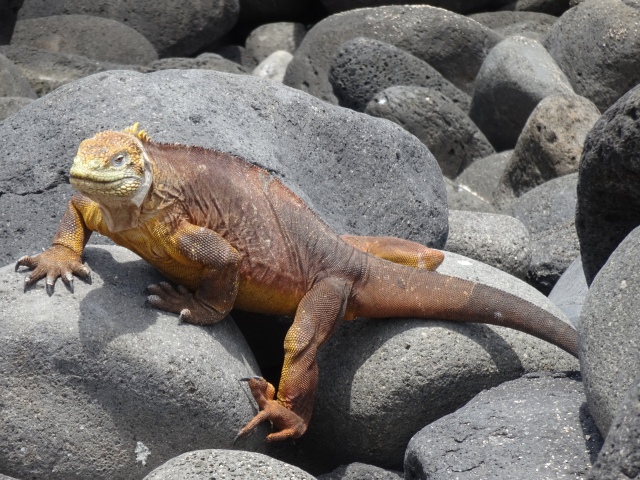 One of the many land iguanas on North Seymour Island.

Once the hike was over, we went snorkeling.  Although the seas were a bit rough, the water was warm (no wet suit required), the visibility was high, and the fish were out in force.  We saw at least three white tipped reef sharks, three of the biggest big eyed porcupine fish I had ever seen, and some huge parrot fish, along with schools of various other colorful fish.

A colorful fish off of North Seymour Island.

We booked our tour the day before at a shop called Academy Bay and supposedly at “last minute” prices.  We paid $200 per person, which was absurdly high but well below the prices we had seen on the internet to book in advance and right in line with prices quoted to us at other shops.  (We found it difficult to find “on the ground” prices when we were researching our Galapagos by land trip, so we are going to be upfront about what we paid for day trips in the hopes it might help others.  Although who knows who will be open and what prices will be charged after covid.  And, please don’t tell us we got taken advantage of.  We really don’t want to know.  Really, we don’t.)  We went on the Adrianna, which was a fairly comfortable catamaran that seemed safe.  We even had a sit down, plated lunch (although the main course was overcooked tuna so neither of us enjoyed lunch that much).  That said, our naturalist was not great.  We saw a frigate bird that was pretty clearly in distress, and she said it was just “resting.”  Yeah, I think not.  And, she swore the porcupine fish were box fish, even though everyone else on the boat disagreed.  She also went on and on about how boobies could only manage to raise one chick at a time and then, seconds later, we saw a mama boobie with two healthy chicks.  And, worst of all, she was the first one in the boat after snorkeling and left the rest of us in the water unattended for 15 minutes or so.  Talk about a no no.  So….not sure we would recommend the naturalist, but the animal sightings on North Seymour were amazing and we would absolutely recommend the trip. 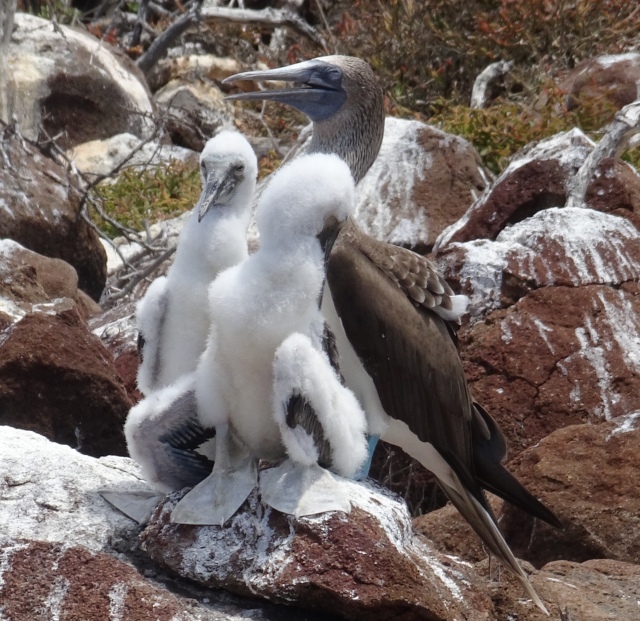 A mama boobie with two babies.

Lisa has a degree in biology and another in law and has spent the last 20 years working as a patent litigator. She is a voracious reader of young adult dystopian fiction and watches far too much bad tv. She loves pretty much anything to do with zombies, and doesn’t think there is anything weird about setting an alarm at 6 am on a weekend to stumble to a pub to watch her beloved Chelsea boys. Robert has had many professions, including a chef, a salesman, an IT guy and most recently, a stay at home dog dad. He speaks Italian and hopes to learn Spanish on this trip. He loves nothing more than a day spent sailing, hopes to do more scuba diving, and rues the day he introduced Lisa to football (i.e., soccer).
View all posts by theschneiduks →
This entry was posted in Ecuador and tagged galapagos islands, nature photography, north seymour island. Bookmark the permalink.