Things to do on Santa Cruz Island, Galapagos*

When we decided to go to the Galapagos, and once I stopped jumping up and down yelling “we are going to the Galapagos,” our first decision was which islands to visit.  (The cruise or land question had already been answered, as there was no way we were going to shell out the big bucks for a fancy cruise).  We ultimately decided to stay six nights each on Santa Cruz, Isabela, and San Cristobal.

A red crab handing out on black volcanic rock on Santa Cruz Island. 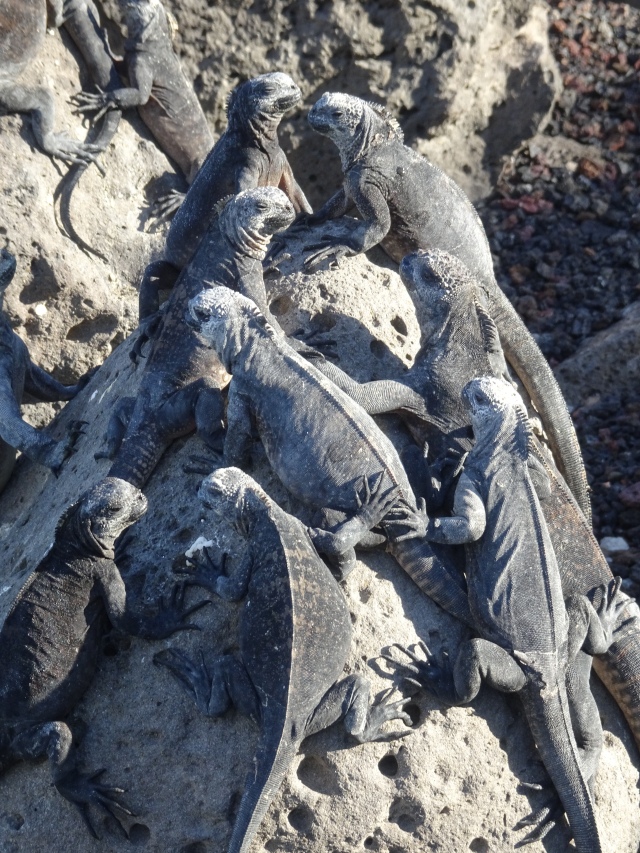 A pile of marine iguanas on Santa Cruz Island.

Getting to Santa Cruz is a bit of an ordeal.  If you are starting from Quito, you first have to buy a $20/person transit card at the Quito airport.  Then, you have to have your luggage checked for contraband.  You aren’t allowed to bring things like fruit or seeds onto the islands, as they don’t want any invasive species coming over from elsewhere.  And, technically, you aren’t allowed to bring single use plastic onto the islands, although all of my liquids were in Ziploc bags and they didn’t bat an eye at that.  Only after doing those two things can you check in for your flight.  Next, you fly to Guayaquil.  Don’t worry, you don’t get off the plane there – they just refuel and take on passengers.  We loved that we were told over and over that we couldn’t use anything electronic while the plane was refueling, while the flight attendants all had cell phones in their hands.  Oh, and if you do this flight, make sure your seats are the same for both legs….our seats initially were not the same and the nice check-in agent fixed it for us, but we saw others moving seats during the layover.  Anyway, from Guayaquil, you fly to Baltra, former home of a US military base and now the main airport for getting into the Galapagos.  If you are lucky like us, you just might spot your first iguana while walking from the plane to the terminal. 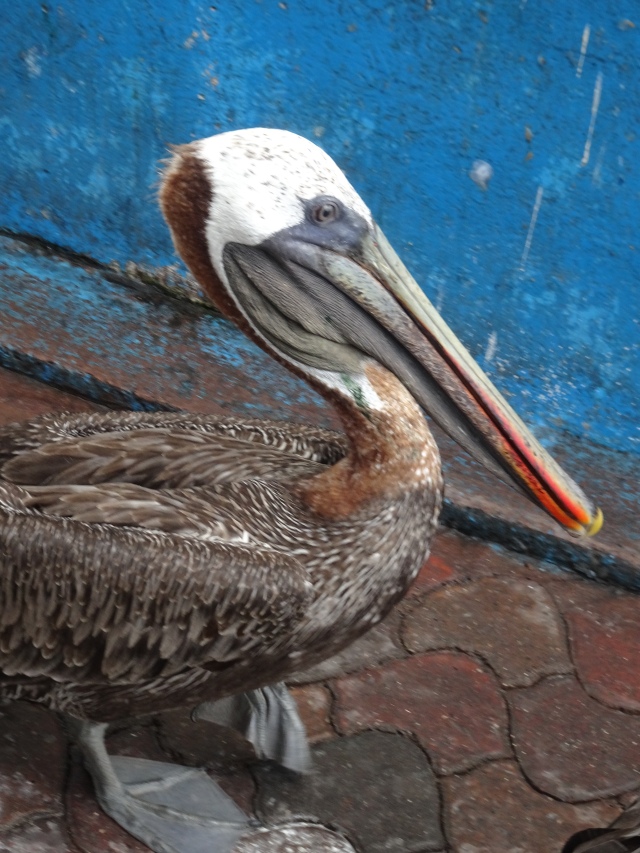 A pelican at the fish market on Santa Cruz Island.

But you aren’t done yet….  Nope….  Not even close.  Next up you have to go through some sort of customs procedure and pay $100 per person for the privilege of setting foot on the Galapagos islands.  Then, you wait while a dog sniffs your bags for contraband.  Once the dog gives the all clear, you make your way to a bus.  The bus costs $5/person and takes you about 10 minutes away to a ferry landing.  The next step is to get on the ferry – don’t worry, someone else unloads your bags from the bus and puts them on the ferry.  The ferry costs $1/person and takes all of about 5 minutes.  Oddly, most people put life jackets on for the short trip.  We did not.  We were wearing our Quito clothes (Quito was cold) and couldn’t manage the thought of one more layer.  Finally, you are on Santa Cruz.  But you still aren’t done.  Nope, once you collect your bags after the boat guys deposit them on shore, you have a choice — $5/person for a bus to town or $25 for a taxi (a pick-up truck) to town.  We chose the bus and it was fine – air conditioned and reasonably comfortable.  Whew!  We were tired before we had even arrived at our hotel… 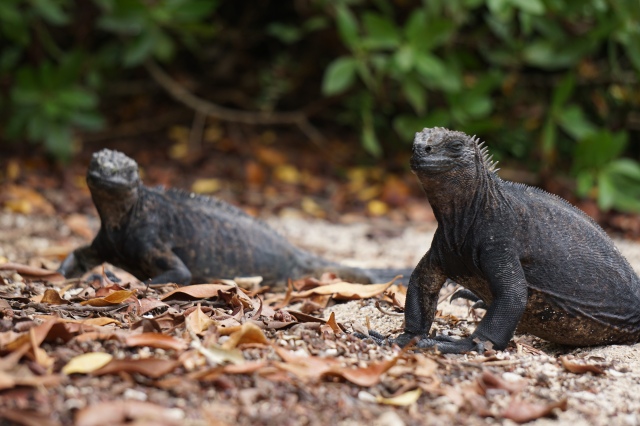 Marine iguanas at the beach near the Darwin Center on Santa Cruz Island.

I’m not sure what we were expecting of Santa Cruz, but we weren’t expecting what we found.  Puerto Aroya (the main town on Santa Cruz) is tourist central.  There are stores and bars and restaurants and even an ATM or two.  The main town reminded me a tiny little bit of a small version of Key West, with even more inflated prices and fewer drunks.  The highlands of the island are green, but the lowlands are a weird desert landscape filled with cacti and volcanic rock.  That said, within two hours of arriving in Puerto Aroya, we had managed to see sea lions, pelicans, land iguanas, water iguanas, frigate birds, Darwin finches, and even a lone blue footed boobie (most of them while sitting at a waterfront bar/restaurant).  Impressive!  Talk about starting things off right. 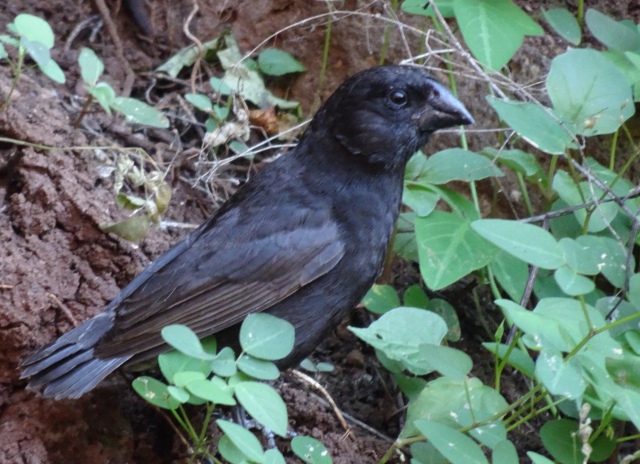 An almost tame bird looking for food (which we didn’t give it) near Las Grietas on Santa Cruz Island.

If you visit Santa Cruz, the one thing you must do is visit one of the tortoise preserves.  We chose to visit Rancho Primicias because we read it was less touristy than El Chato.  You can take a tour there, but we just hired one of the pick-up truck taxis to take us.  It was $40 for round trip fare (which seems a bit outrageous but we had read it could be up to $50 so I guess we did ok), and the driver will also take you to the lava tunnels if you like (we passed on those and the driver seemed quite surprised).  The ranch is basically just some rolling fields with small ponds.  The tortoises are free to come and go as they like, and tourists are free to walk anywhere they like, so long as they stay two meters away from the tortoises.  We did find that the tortoises were easy to startle and if you made noise they would withdraw into their shell, but they would come out again within seconds if you stood still.  We also learned that Galapagos tortoises make a sound that sounds an awful lot like a cow mooing.  And, that they will fight over prime spots in the mud.  We visited Rancho Primicias in early March and saw probably 40 tortoises.  Apparently, most of the tortoises are further up in the highlands at that time of year, because it is just too hot for them, and our taxi driver was very apologetic that there weren’t hundreds of tortoises.  But, we were pretty happy with 40.

A tortoise at Rancho Primicias on Santa Cruz Island.

Another fun thing to do is to visit Las Grietas.  To get there, you first take a water taxi across the bay.  It is less than $1 and takes just a few minutes.  Then, you walk on a very hot path to Las Grietas, which is a crack in volcanic rock filled with brackish water and a few very large fish.  We both did a bit of snorkeling there.  The water was cold, but refreshing.  Be aware that there are no facilities at Las Grietas, although at about the midway of the path there are a couple of restaurants where you can buy water.  We snorkeled one at a time so one of us could look after our things, which is not the most enjoyable way to spend the day, but it was alright for a short trip.  Especially given that, other than the water taxi, the experience was completely free. 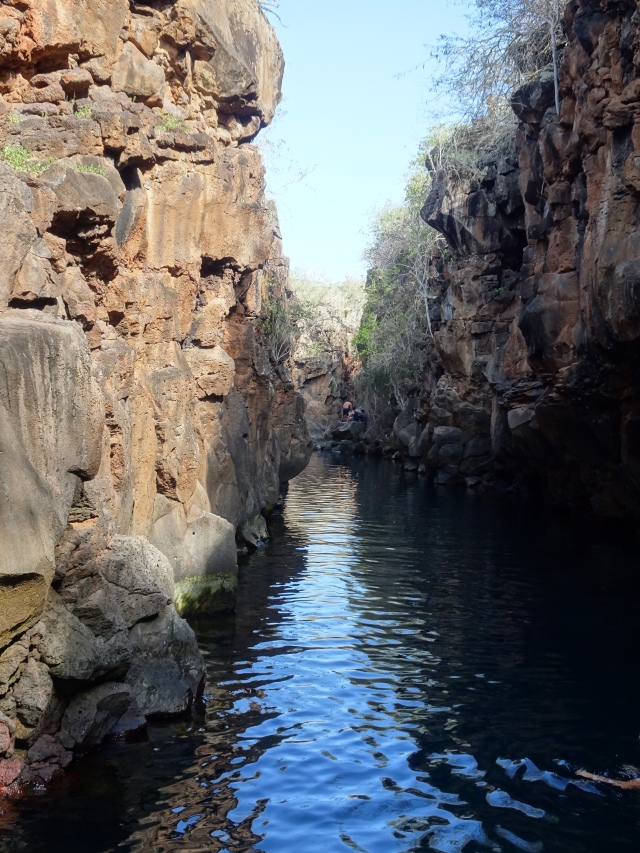 We also really enjoyed visiting the fish market.  It is small, with just a handful of people gutting fish.  But, the sea lions and the pelicans and the frigate birds have learned that they will get the guts.  Most of them wait more or less patiently for their treats, but we saw birds swoop in and steal guts, we saw a sea lion steal an entire fish (no, he didn’t get to keep it), and we saw pelicans literally fighting over fish entrails and reaching into each other’s beaks in an attempt to steal smelly fish guts.  It is certainly a fun spot to visit as you are walking by and is also a completely free way to spend some time.  In fact, we stopped to watch the scene every single day we were on Santa Cruz. 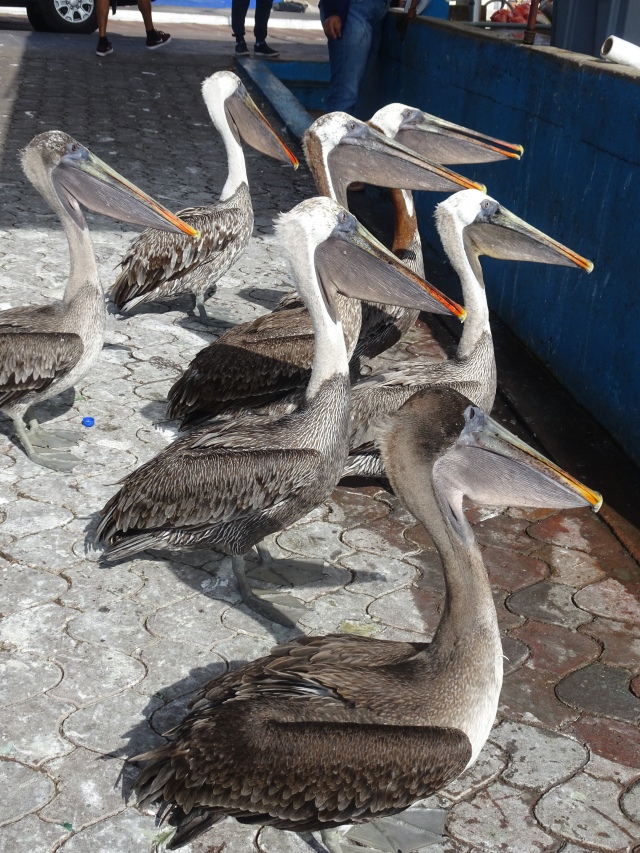 Pelicans waiting for a snack at the fish market on Santa Cruz Island.

Now, for some sacrilege.  Everyone will tell you that you have to visit the Charles Darwin Research Center and tortoise breeding center.  You know what?  You don’t have to visit.  If you have time, it is fine, but neither of us thought it was anything special.  The Research Center didn’t have much information.  The breeding center, while obviously doing good work, is basically just like a zoo and the tortoises are fairly far away.  If you do go, make sure to check out the beach full of marine iguanas.  They look just like rocks.

A frigate (and, if you look closely, a pelican) trying to steal a snack at the fish market on Santa Cruz Island.

Lisa has a degree in biology and another in law and has spent the last 20 years working as a patent litigator. She is a voracious reader of young adult dystopian fiction and watches far too much bad tv. She loves pretty much anything to do with zombies, and doesn’t think there is anything weird about setting an alarm at 6 am on a weekend to stumble to a pub to watch her beloved Chelsea boys. Robert has had many professions, including a chef, a salesman, an IT guy and most recently, a stay at home dog dad. He speaks Italian and hopes to learn Spanish on this trip. He loves nothing more than a day spent sailing, hopes to do more scuba diving, and rues the day he introduced Lisa to football (i.e., soccer).
View all posts by theschneiduks →
This entry was posted in Ecuador and tagged galapagos islands, nature photography, santa cruz island. Bookmark the permalink.

3 Responses to Things to do on Santa Cruz Island, Galapagos*