The food you have to try in Colombia*

Many people think of Colombian food as meat and starch, and there is quite a bit of that to be found.  But, we happen to really like the food in Colombia (especially the street food).  So, what foods do you have to try?  Well, let us tell you….(these are in alphabetical order).

Aguardiente:  Aguardiente is the local alcohol.  It is generally anise-flavored and doesn’t have a ton of alcohol in it (generally, under 30%).  I didn’t care for it, but Robert enjoyed a shot now and then.  No photo though.  We had intended to get one when we returned to Colombia after our visit to Ecuador but that obviously isn’t happening now.

Ajiaco:  Colombians love soup and, personally, I think this is the best.  In fact, I’m so in love with ajiaco that back in 2016 we flew to Bogota for a long weekend just so I could eat ajaico soup.  (OK, fine, I might also have been having a bit of a meltdown about returning to work after a year of travel.  Whatever.)  Ajiaco soup is made with chicken and three types of potatoes and corn (usually on the cob, and usually far too starchy to actually want to eat) and a local herb called guascas.  Some of the potatoes kind of dissolve in the soup to make it nice and thick.  It is generally served with rice, avocado, capers, and cream.  It certainly doesn’t have a kick, but nonetheless it is delicious. 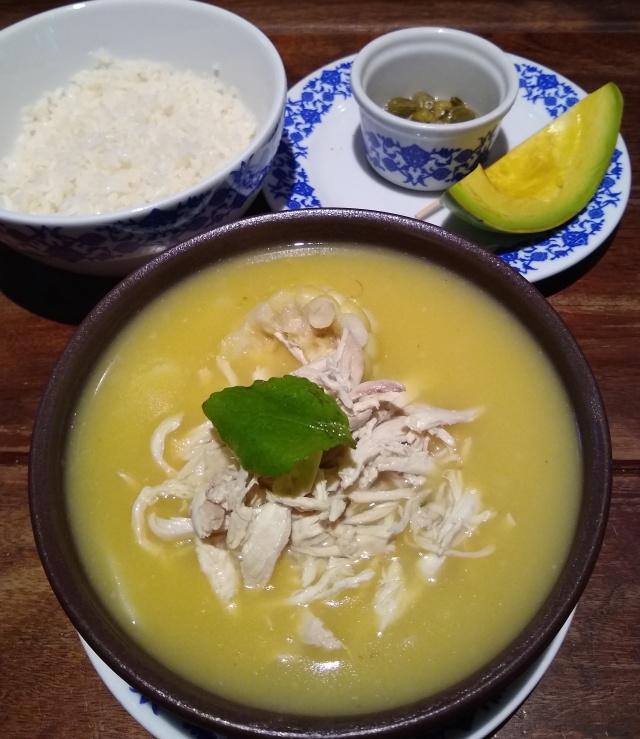 Arepas de choclo:  Arepas are everywhere in Colombia and come in all different forms.  One of the best types is called arepa de choclo.  These arepas are sweet corn cakes fried on a grill with tons of butter (too much butter, in my opinion) and then topped with a mild white cheese.  Luckily, (at least in Medellin) the cheese usually comes in two pieces so Robert gets twice the cheese and I get a plain corn cake.  Yum!  Note that arepas de choclo are pretty different in Cartagena.  There, the cheese is mozzarella and they are made more like a sandwich.  The ones in Medellin are are far superior in my opinion. 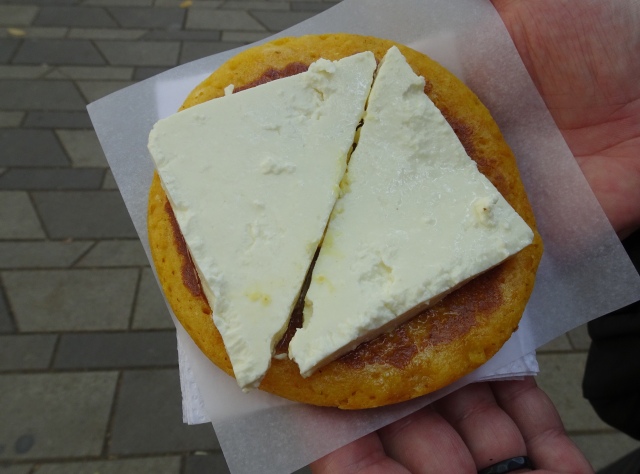 Arepas de huevo:  Quite possibly my favorite Colombian food after ajiaco.  These beauties are amazing.  First, the vendor lightly fries a corn patty in oil.  Then, the vendor opens it up kind of like a pita pocket.  Ingredients such as an egg and sometimes meat are put inside, the arepa is sealed up with a small piece of raw dough, and the whole thing is put back into the oil.  Amazing!  If you visit Cartagena you have to try these at one particular vendor.  She sets up her stand on Carrera 11 between Calle 38 and 37 (very close to 38 and right in front of a small pharmacy).  She is super friendly and quickly recognized us and knew exactly what we wanted.  There is another vendor right next to her (closer to 37) who also has some good food, although we didn’t try the arepa there. 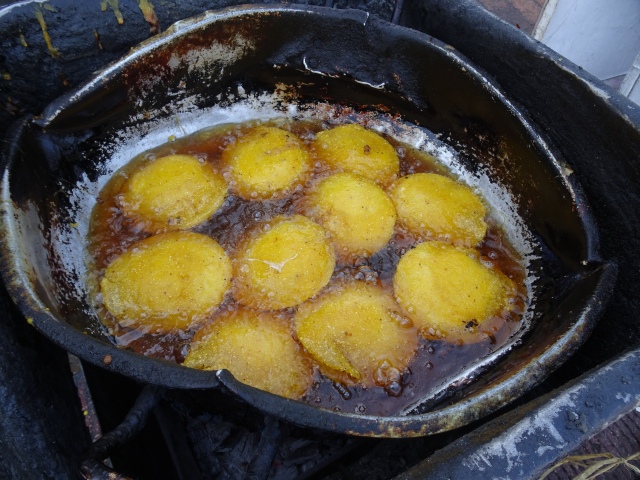 Bandeja paisa:  This is THE dish to have in Medellin.  The precise make-up of the dish varies from restaurant to restaurant, but pretty much always includes chicharron, either grilled or ground meat, some sort of sausage, an egg, rice, beans, plantain, avocado, and an arepa.  Do not order this unless you are very, very hungry!  (Oh, and the ground meat is often called powdered meat on English language menus.)

A bandeja paisa in Medellin.  It tastes better than it looks.

Bunuelos:  These are fried balls of cheesy dough made of corn starch.  Robert loves them.  Me, not so much.  Apparently, traditionally these were served at Christmas until one day people woke up and said “hey, we should make these all year long.”  Now, there are street stands everywhere serving up this snack.  Make sure to get them freshly fried. 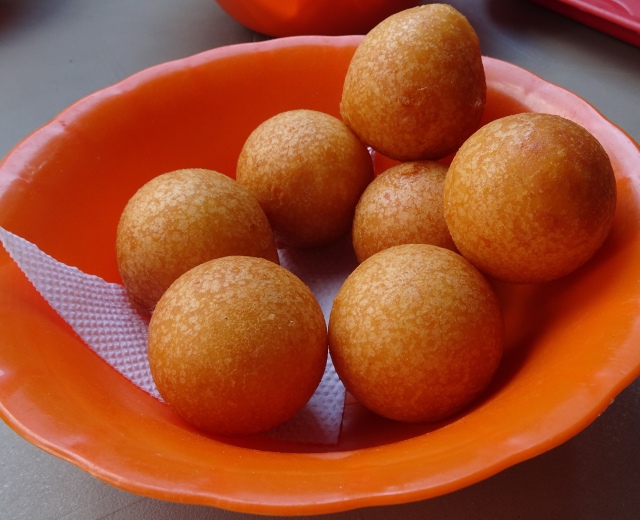 Ceviche:  Cartagena is famous for its ceviche.  And, the ceviche there is very different than the ceviche in the U.S. — there are many different types with a wide variety of seafood and they include things like coconut and tamarind.  Anthony Bourdain even recommended a place called La Cevicheria when he visited Cartagena.  Robert ate at La Cevicheria back in 2015 and was so excited to return in 2020 (and, I didn’t mind because La Cevicheria has some of the best wine in Cartagena at decent prices).  Thankfully, he tells me it was as good as he remembered (and the wine was as good as I remembered).  Unfortunately (or, maybe more accurately, fortunately), La Cevicheria closed for a few days while we were in Cartagena so Robert was forced to try ceviche elsewhere.  Well, he tells me El Boliche Cebecheria is every bit as good as La Cevicheria.  I will take his word for (I think ceviche is yucky), but I thought El Boliche Cebecheria looked far more interesting.

Tamarind ceviche at El Boliche Cebecheria.  This one had a huge mussel, claims, fish, octopus, shrimp, and calamari.

Coffee:  Everyone has heard of Colombian coffee, right?  And it is some of the best coffee in the world, right?  Well, dear readers, let me tell you something.  Most of the good stuff is exported right out of Colombia.  If you pop into Juan Valdez (the Colombian equivalent of Starbucks) thinking you are going to get a good coffee, you better think again.  But, there is good coffee out there if you look for it.  For example, in Bogota, you should definitely check out Arte y Pasion Cafe.  This barista school serves up something like 12 different coffees and brews them in something like eight different ways.  And, if you order one of those milky drinks, they have about 20 different designs they can put on top.  In Medellin, Robert tells me the iced coffee at Alma (a local chain) is fantastic, but that the best coffee is something called “The Dripper” at Carnito Mio.  In Cartagena, Robert really liked Folklore (and they had a fantastic limonade de coco for me). 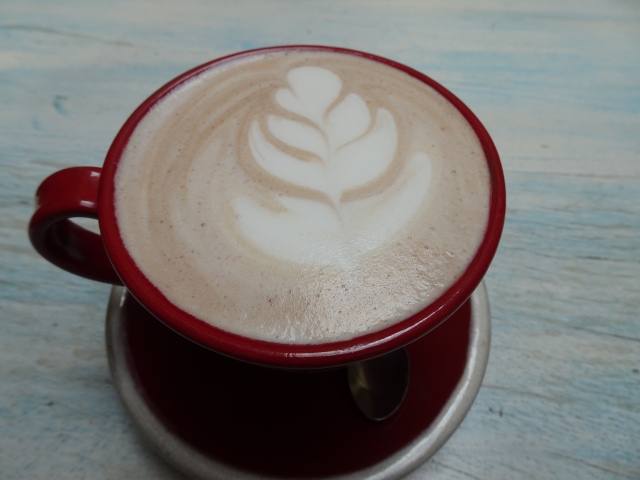 OK, so I cheated.  This is actually hot chocolate — not coffee — from Arte y Pasion Cafe.  Robert doesn’t drink those milky drinks.

Empanadas:  Empanadas are a pastry made (at least in Colombia) with corn flour and then (at least in Colombia) fried.  They come in a variety of flavors, like chicken or beef, and there is often potato and egg inside too.  A perfect snack as you are sightseeing (as long as the vendor you chose doesn’t use too many onions).

An empanada from a street food vendor in Medellin.

Fruit:  Seriously, fruit.  The fruit in Colombia is out of this world and there are so many different types of fruit.  If you visit a city with a fruit market tour (like Medellin), you should seriously take the tour just to discover some of the different fruits.  Some are downright disgusting.  I’m thinking of you, chontaduro (which tastes like a dried out sweet potato).  Some are downright weird.  Like the algarobba fruit, which smells like stinky feet and tastes like a mix of freeze-dried peanut butter and Lucky Charms marshmallows.  But most — like lulo (sort of like an orange) and mangosteen (Robert’s favorite) and pitahaya (a local dragon fruit) — are just plain delicious. 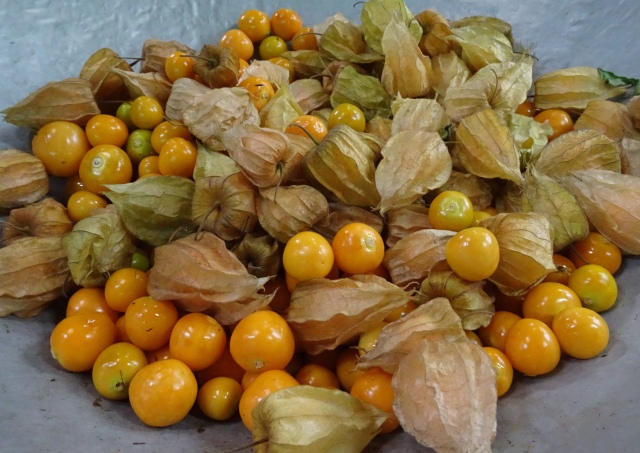 Uchuva fruit.  One of my favorites in Colombia.

Hot chocolate and cheese:  I know, I know.  It sounds disgusting.  And, I have to be honest — I didn’t try it.  But Robert’s face lit up like a little boy’s on Christmas morning when he dug into his melted, gooey cheese, so I’m guessing it has to be good.  Here is how it works.  The cafe will bring you out some hot chocolate and some white cheese.  Break the cheese up into not-too-small chunks and drop it in the hot chocolate.  Drink about half of your chocolate.  By that time, the cheese should be nice and melted.  Pick up the chocolate with a spoon and eat it.  Drink more chocolate.  Repeat. 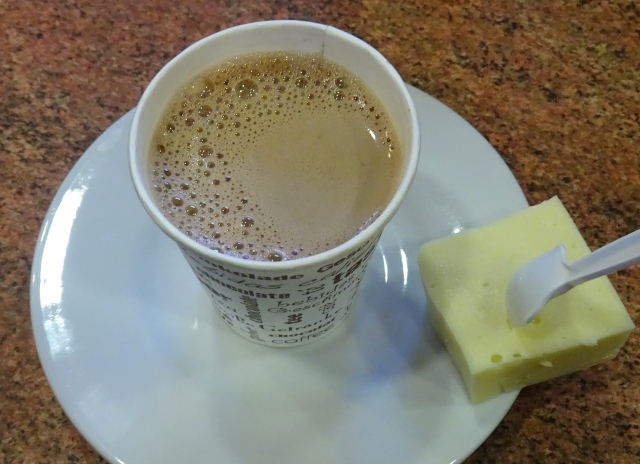 Hot chocolate and cheese in Bogota.

Juice, juice, and more juice:  We drank so much juice in Colombia.  We had a juice nearly every day (and sometimes more than one).  No wonder we didn’t lose much weight in Colombia…  The juices are out of this world.  Our favorites were pineapple and passion fruit and lulo and limonade de coco (lime juice and coconut milk).  But, my absolute favorite was strawberry.  Yes, good strawberry juice is sublime.

Obleas:  Obleas are one of my favorite things in Colombia.  An oblea basically consists of two thin wafers with some sort of sweet filling inside.  Apparently, the traditional flavor mixture is arequipe (like dulce de leche) and cheese.  I’m pretty sure that is disgusting, but I can’t say I tried it.  My go to oblea is arequipe and peanuts, but you can get chocolate or jam or cream as well as chocolate chips and sprinkles and other things depending on the vendor.

Vendor making an oblea in Bogota.

Pizza:  Stay with me on this one.  I ate more than my fair share of pizzas in Colombia (a girl can only eat so much grilled meat and ajiaco).  And, the vast majority of pizzas in Colombia are absolutely nothing special.  But, if you visit Medellin, you absolutely must visit Pizzaiolo in the Poblado neighborhood.  Real Italian pizza in Colombia.  I kid you not.  We ate here three times in three weeks. 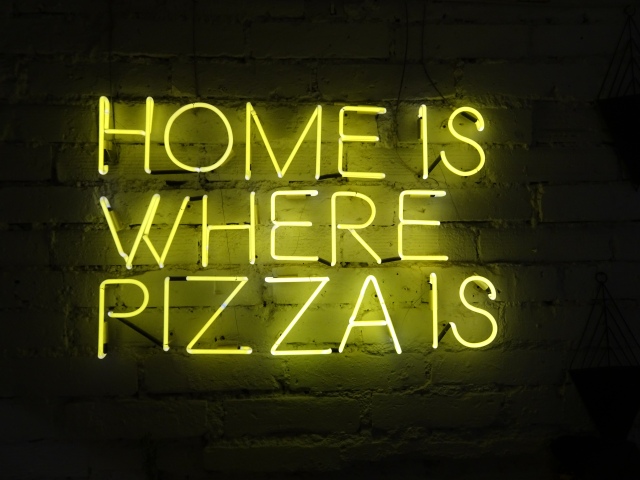 Y’all know what pizza looks like by now so here is some art from Pizzaiolo.

Sancocho:  This is another famous Colombian soup.  The soup is made with large pieces of meat (such as chicken, pork, and beef) and large tubers (such as potatoes, plantain, or cassava), as well as some vegetables (such as a small piece of corn on the cob).  It is usually served with rice and avocado. 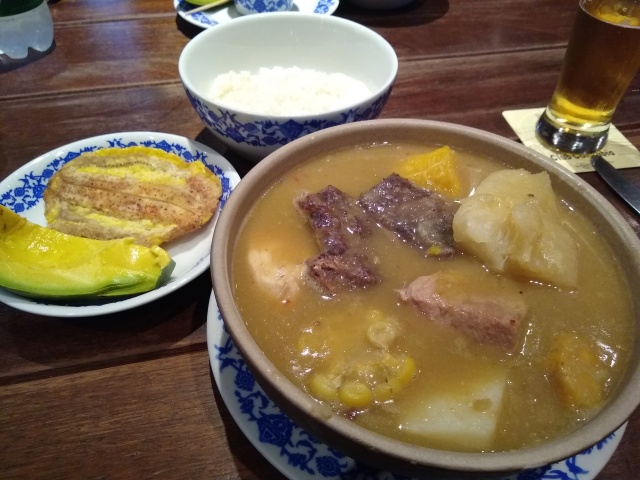 If the world ever gets backs to normal, we look forward to more Colombian food.  Otherwise, Robert is really going to have to learn how to make an arepa de huevo…

Lisa has a degree in biology and another in law and has spent the last 20 years working as a patent litigator. She is a voracious reader of young adult dystopian fiction and watches far too much bad tv. She loves pretty much anything to do with zombies, and doesn’t think there is anything weird about setting an alarm at 6 am on a weekend to stumble to a pub to watch her beloved Chelsea boys. Robert has had many professions, including a chef, a salesman, an IT guy and most recently, a stay at home dog dad. He speaks Italian and hopes to learn Spanish on this trip. He loves nothing more than a day spent sailing, hopes to do more scuba diving, and rues the day he introduced Lisa to football (i.e., soccer).
View all posts by theschneiduks →
This entry was posted in Colombia and tagged bogota, cartagena, medellin, street food. Bookmark the permalink.