Would you look at those knockers!

Hey!  Get your head out of the gutter (I’m talking to you dad)….this post is about the famous door knockers of Cartagena.

Cartagena is yet another UNESCO world heritage site.  I don’t think the doors or the door knockers were included in the UNESCO listing, but perhaps they should have been.

Octopus door knocker in Cartagena.  Note one of the tentacles move to act as a knocker.

The doors on most of the old buildings in Cartagena are really two doors in one.  There is a big door (used for guests or large deliveries) and a small door (used by the owners of the house to come and go).  And, there are beautiful old door knockers (called aldaba in Spanish).  Back in the day, the doors and the knockers identified the social status or profession of the residents of the building.  The bigger and more ornate the doors and the knockers, the more impressive was the family’s social standing.

A Cartagena door.  If you look closely, you can see the small door on the right.

Knockers shaped like fish or other creatures of the sea indicated that the home owner was a sea merchant.  Although why sea merchants would want to decorate their homes with mermaids is beyond me….

Knockers shaped like lions meant the home owner was military or the like.  The lions seem to be the most extravagant of the knockers. 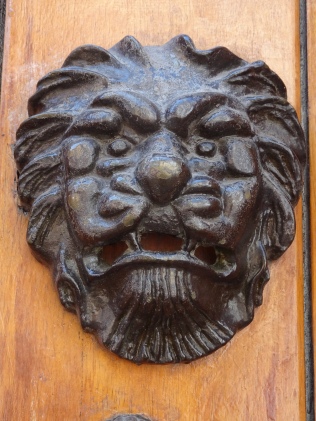 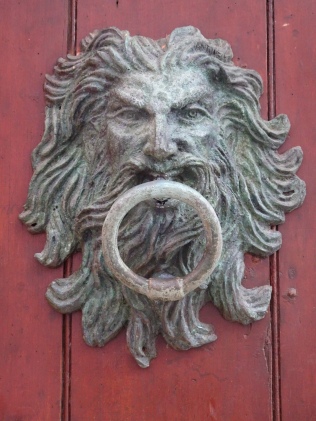 And, hands indicated clergy.  The hands are pretty hard to find these days (in fact, I read there are only three left in the city), but we did find one. 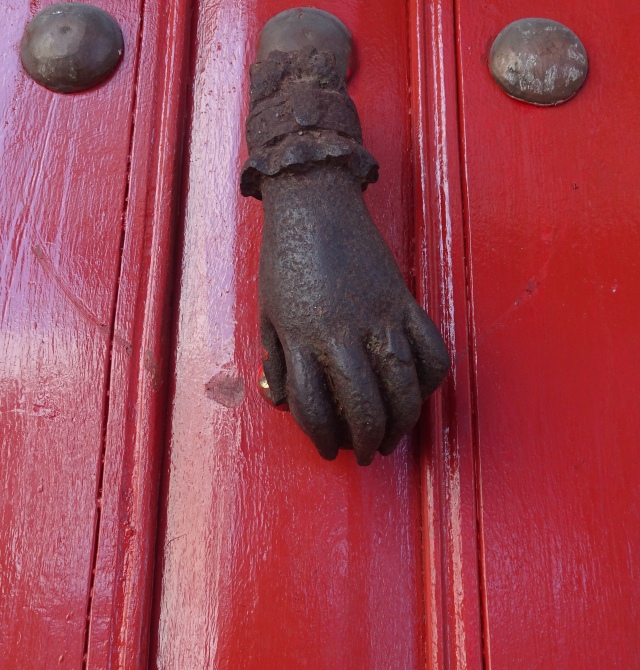 I have no idea what a devil doorknocker means…and I’m not sure I want to know.

Lisa has a degree in biology and another in law and has spent the last 20 years working as a patent litigator. She is a voracious reader of young adult dystopian fiction and watches far too much bad tv. She loves pretty much anything to do with zombies, and doesn’t think there is anything weird about setting an alarm at 6 am on a weekend to stumble to a pub to watch her beloved Chelsea boys. Robert has had many professions, including a chef, a salesman, an IT guy and most recently, a stay at home dog dad. He speaks Italian and hopes to learn Spanish on this trip. He loves nothing more than a day spent sailing, hopes to do more scuba diving, and rues the day he introduced Lisa to football (i.e., soccer).
View all posts by theschneiduks →
This entry was posted in Colombia and tagged cartagena, unesco world heritage site. Bookmark the permalink.