Sheltering in place due to Covid-19

So, wow, this is one strange year, right?  Things were going along just fine and then “boom” the entire world changed almost overnight.  At least for us it did.  We were having a grand old time in the Galapagos Islands (I’ve included some photos now because it may be awhile until I get to those posts) when we got an email late on a Saturday night from the U.S. State Department saying that Ecuador was closing its borders in 24 hours for tourists and 48 hours for citizens.  We frantically jumped on our devices to try to get flights off of the islands and to Guayaquil on the mainland and then out of Ecuador (even though we weren’t sure that was the safest course of action).  And, then, we watched as website after website refused to load or crashed just as we thought it was going to load.  Gotta love the internet in the Galapagos.  Not.  We were finally able to determine that we could get a flight off the islands on Monday (only a day earlier than planned) but it would cost about $600 per person.  That was expensive enough that we couldn’t bring ourselves to pull the trigger immediately.  Big mistake.  When we looked again, the tickets were long gone.

So, once we knew we weren’t going to reach Guayaquil before Tuesday evening, we frantically bought tickets to Chicago departing Guayaquil on Wednesday morning while keeping our fingers crossed that the airlines would still be operating flights out on Wednesday.  But, then, we saw the scenes of the 8-9 hour waits getting through customs at O’Hare and thought “if we haven’t been exposed yet, we certainly will be after that experience.”  So, back to the drawing board.  We started looking at flights to Minneapolis via Houston (which was not one of the airports accepting people from Europe) in the hopes that getting through customs would be a bit easier and safer on that route.  Those flights left Ecuador at 4;15 am and didn’t get to Minneapolis until after 10 pm with two transfers.  Gulp.  Nonetheless, we pulled out the credit card and bought those tickets too, hoping that United was too overwhelmed to realize we had two tickets to two destinations on the same day.  It was all to no avail.  Both flights out of Ecuador were cancelled.  Oh, and it turns out United isn’t giving refunds for flights that they cancel.  Nope, you just get a credit to use over the course of the next year.  Lots of good that is going to do when they go bankrupt…. 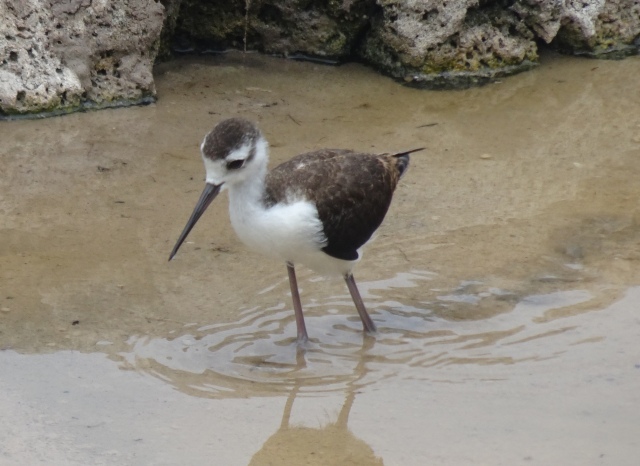 I’m guessing this is some sort of sandpiper.  It was on Isabella Island.

Anyway, we woke up bright and early Tuesday morning and dragged our bags to the airport on San Cristobal island 3+ hours before our flight.  We were met with total chaos.  Lines of people snaking out the doors.  Lines of people trying to get into the airport to buy tickets.  Backpackers sitting forlornly on the curb with no idea what they were going to do or how they were going to afford to do it.  Rumors that the flights were cancelled because the planes had to fly to the Galapagos empty.  Rumors that the government was saying all tourists had to leave the islands even if there were no flights.  (Seriously?  How would that even work?)  Rumors that all the hotels on the islands were closing.  And, people wearing masks.  Badly.  We saw some that I’m pretty sure had been padded bras the day before.  Seriously.  And, what is the point of wearing a mask if (1) you touch the inside of the mask with unwashed hands; (2) you put the inside of the mask down on an unwashed table; or (3) you put the mask on top of your head like a pair of sunglasses????  And, why do people think the masks can come off as soon as they get into the Priority Pass lounge?  And, do you really think your sheer fashion scarf is going to protect you?  Don’t get me started….

Anyway, after hours standing in line in the Galapagos heat and liberal application of a hand sanitizer that likely didn’t have enough alcohol in it to kill anything, we finally got into the airport and onto our flight.  I’ve never been happier to catch a flight.  (OK, that isn’t true.  I’m always ecstatic when flying to SE Asia….)

But, we weren’t out of the woods yet.  When we woke up Tuesday, our plan was to spend the night at a hotel in Guayaquil and then have a private driver drive us to Cuenca where we had an Airbnb waiting for us.  We had talked to the owner and he assured us we could stay as long as we needed.  Perfect.  Until Ecuador announced a travel ban within the country and our Airbnb host confirmed there was no way to get from Guayaquil to Cuenca.  Oh oh, now we were really in trouble.  At least we had a hotel room booked so we had a bit of breathing room to figure something out. 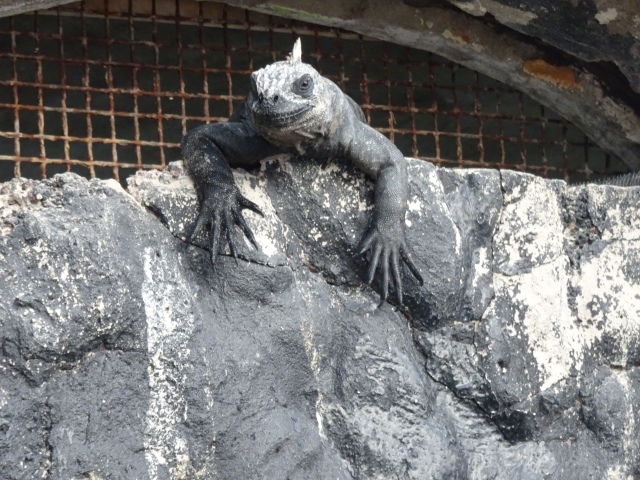 A marine iguana on Isabela Island.

We checked into our hotel and immediately started looking for a place to stay in Guayaquil.  The real question was “how long are we going to have to stay.”  Nobody really knows and the information was conflicting — we read the travel ban would last 15 days in one place and 60 days in another place.  Hmmm…someone clearly has their facts wrong.  We read an article saying social distancing will need to continue until a vaccine is developed.  Hmmm….that is going to be at least 18 months or so.  Ultimately, we decided that, since our original ticket out of Ecuador departs on April 24, we would book a place until then.  If we can leave, great.  If we can’t, it isn’t like anyone else is going to be coming into the country looking for an apartment, right?  Fingers crossed…. 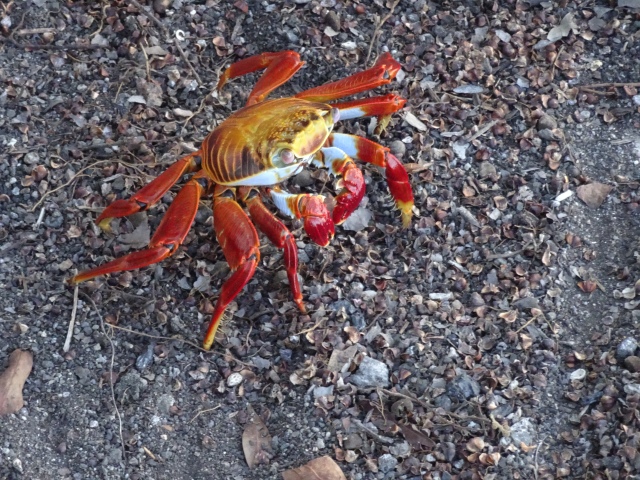 Anyway, we are in Guayaquil trying to shelter in place for the foreseeable future.  The city is virtually shut down.  Groceries and pharmacies are open, but everything else is closed.  There is currently a curfew from 4 pm to 5 am.  Nobody can leave their homes except for essential things like getting groceries and going to the doctor.  While we are far more confined than we would be in the U.S., we are also likely safer.  Our apartment is lovely and HUGE.  Two bedrooms.  Three full bathrooms.  Two half bathrooms.  A laundry room.  A suburban American sized kitchen with an American sized fridge and an island with six stools.  Robert is going to get to do some cooking again.  Netflix.  And, not one but two balconies.  I think those balconies are going to save our sanity….

A pink flamingo on Isabela Island.

Please stay safe during these turbulent and uncertain times.  We will have some future posts from our past travels, but we have no idea when we will get back on the road.

Lisa has a degree in biology and another in law and has spent the last 20 years working as a patent litigator. She is a voracious reader of young adult dystopian fiction and watches far too much bad tv. She loves pretty much anything to do with zombies, and doesn’t think there is anything weird about setting an alarm at 6 am on a weekend to stumble to a pub to watch her beloved Chelsea boys. Robert has had many professions, including a chef, a salesman, an IT guy and most recently, a stay at home dog dad. He speaks Italian and hopes to learn Spanish on this trip. He loves nothing more than a day spent sailing, hopes to do more scuba diving, and rues the day he introduced Lisa to football (i.e., soccer).
View all posts by theschneiduks →
This entry was posted in Ecuador, Uncategorized and tagged galapagos islands, guayaquil. Bookmark the permalink.

2 Responses to Sheltering in place due to Covid-19