A day trip to Versailles

Posted on February 2, 2020 by theschneiduks

We didn’t do much in Paris due to the transit strike and the nasty weather, but before the strike got going we made our way to Versailles for a day.  Here is what we learned (a bit tongue in cheek).

A small bit of detail on the roof of Versailles.

Versailles might be a UNESCO world heritage site, but it absolutely reeks of cat pee.  Seriously, the palace stunk so badly we were afraid we were going to have to wash our winter coats just to get the stench out.  I have no idea if what we were smelling really was cat pee, but the smell was so bad it truly marred our experience.

Joan of Arc in Versailles.

King Louis XIV apparently had absolutely horrible taste.  The decor inside the palace is beyond garish.  Colors and patterns clash everywhere and there is so, so much gold.

One of the rooms in Versailles.  So much gold…

King Louis XIV apparently had a serious thing for cherubs.  They are everywhere.

One of the many cherubs at Versailles.  This was a detail on a ceiling.

Going to Versailles in November has one serious advantage.  The crowds are smaller — we didn’t have to wait in line at all.  Don’t worry though, the crowds are just as rude in November as any other time of year.  People will literally plant themselves right in front of you so they can get the photo you were trying to get.  They will shove you.  And, they will get so close to you in their attempt to get the perfect photo that their camera will literally brush your hair. 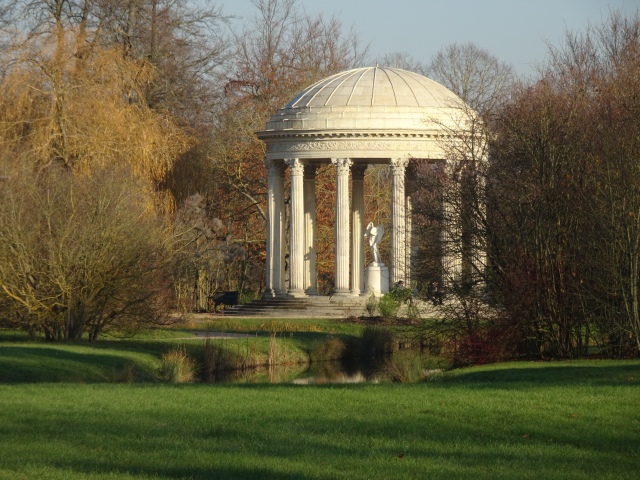 In the gardens at Versailles.

Going to Versailles in November has one serious disadvantage.  Most of the outdoor sculptures are covered up to protect them from the winter elements.  Giving our love of sculpture, this was beyond disappointing. 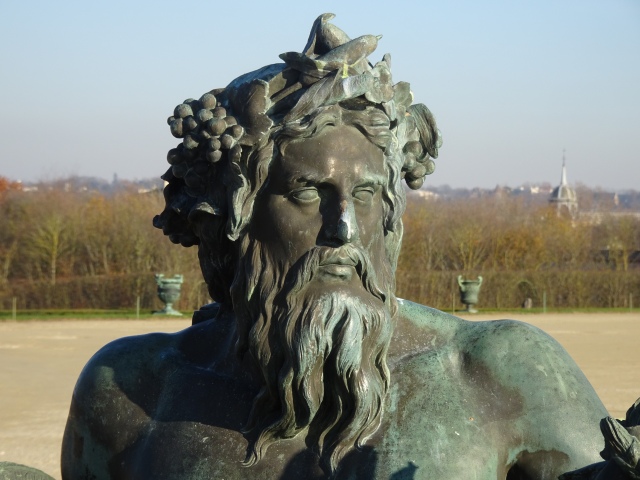 One of the few outdoor sculptures that wasn’t covered up.

There were some sculptures in the palace itself and few outside were left uncovered.  These were enough for Robert to decree that breasts in the 17th century must have been fantastic.  (His words, not mine).

Yeah, Robert took this one.

Whoever designed the gardens was a genius.  Although everything was dead in November, we could tell they would be stunning in the summer.

One of the fountains in the garden.

There is a branch of Laduree inside the palace.  We thought great, let’s get a couple of macarons to take out into the gardens (where eating is allowed).  Silly us.  Don’t worry, the Laduree sales person gave us a nice little lecture about how we are in a museum and they only sell boxes of macarons to take back to Paris with you.  Um, there are branches of Laduree all around Paris with a significantly larger selection of flavors so why would I buy a box at Versailles? 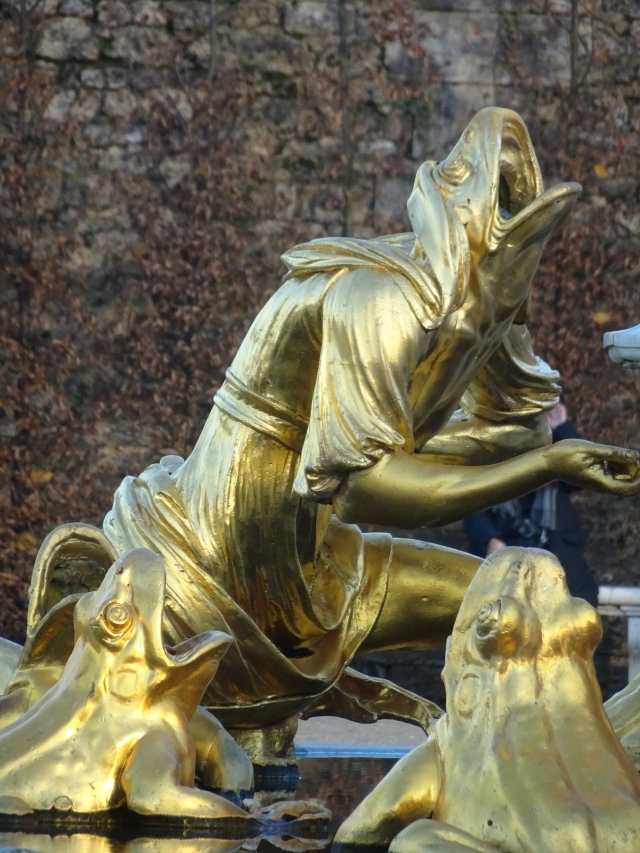 Another fountain at Versailles.

Versailles so does not need to be on your list of “must sees” in Paris.  Are we glad we went?  Sure, it was a nice day out.  But we never have to go back.  And, if you want to go, go, but don’t feel like you have to because you don’t.  Especially if the cat pee smell persists.

Lisa has a degree in biology and another in law and has spent the last 20 years working as a patent litigator. She is a voracious reader of young adult dystopian fiction and watches far too much bad tv. She loves pretty much anything to do with zombies, and doesn’t think there is anything weird about setting an alarm at 6 am on a weekend to stumble to a pub to watch her beloved Chelsea boys. Robert has had many professions, including a chef, a salesman, an IT guy and most recently, a stay at home dog dad. He speaks Italian and hopes to learn Spanish on this trip. He loves nothing more than a day spent sailing, hopes to do more scuba diving, and rues the day he introduced Lisa to football (i.e., soccer).
View all posts by theschneiduks →
This entry was posted in France and tagged paris, unesco world heritage site. Bookmark the permalink.