Self walking tour of the Rome highlights

Rome is a great city for walking.  Not too many hills (only 7!) and something to see around nearly every corner.  Plus, gelato and slices of Roman-style pizza all along the way if you need a sugar or fat buzz.  So, on our first day of sightseeing in Rome, we decided to hit the highlights.  Now, don’t get me wrong.  It is impossible to see all of the highlights of Rome in one day.  And, our highlights may not be your highlights.  For example, neither of us had even the slightest interest in seeing the Vatican again.  (Don’t get me started because I can go on for hours about the absurdity of the church being that wealthy and the absurdity of the fig leaves added to many of the statues in the Vatican museum and the horrible crowds and so on and so forth).  And, we probably didn’t walk the most ideal route, as we hit the sights that were most important to us first because the sun sets early in Rome in November and we weren’t sure we could hit everything.  But, if you like to walk, here is a suggested route that will hit many of the highlights of Rome. 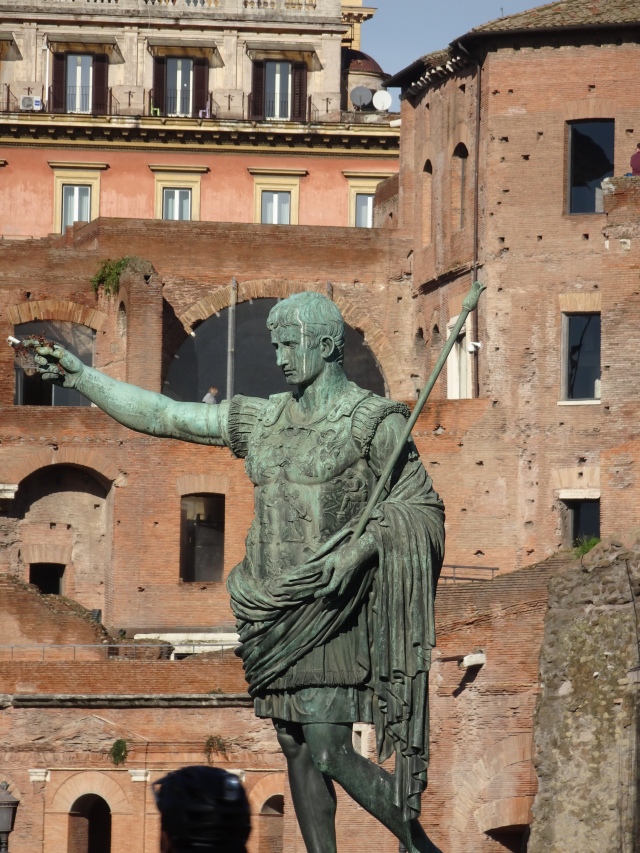 A random statue in front of ancient ruins somewhere near the Coliseum.  There are so many ruins in Rome.  It seems like they are everywhere.

First, we visited the coliseum.  We had purchased tickets in advance (although, honestly, I’m not sure we needed to do so in November) that included a 45 minute tour.  Personally, I thought the tour was a bit of a waste and the best part was the view of the coliseum from the outside, but Robert really enjoyed going into the coliseum even if it was full of scaffolding and massive tour groups being lead around by umbrellas and flags.  We did at least learn something interesting — the coliseum got its name from a colossal statue of Nero that once stood nearby.  Who knew?

Outside of the coliseum, early in the morning before the crowds got too bad.

Us in front of the Arch of Constantine, which stands outside the coliseum.  Pretty sad the powers that be had to put that huge fence around it, right?

After Palatine Hill, we wandered through the Forum.  The Forum was once the center of day-to-day life in ancient Rome.  Now, there are some pretty cool old ruins in surprisingly good condition.

Part of the Forum. 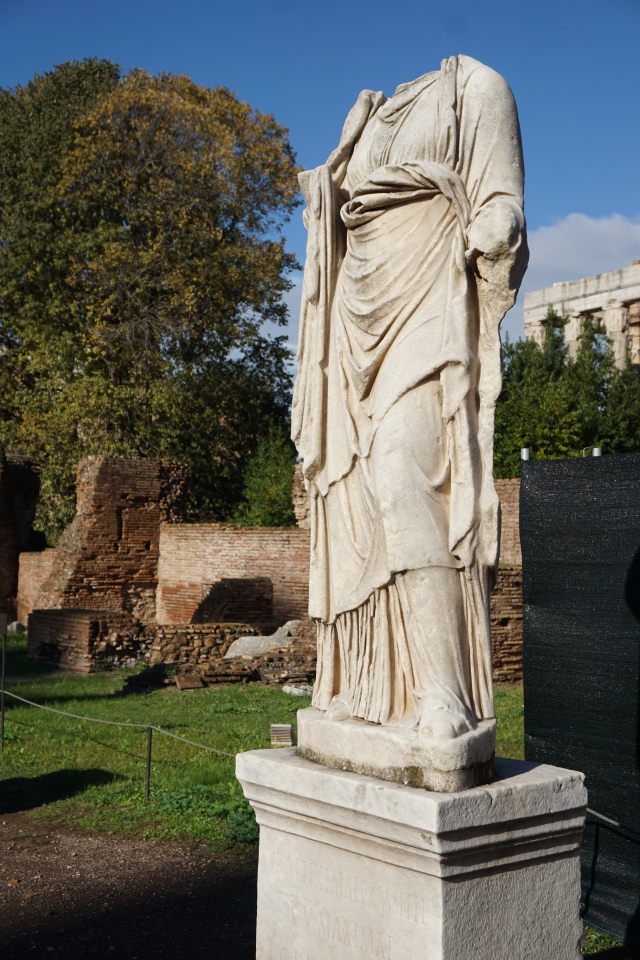 Headless statue of a Vestal Virgin in the forum.

Next, we walked past the Victor Emmanuel II National Monument, dedicated to the first king of unified Italy.  The building was huge, and some of the statues on top could be seen throughout large swaths of the city.

Victor Emmanuel II National Monument, sometimes known as the Alter of the Fatherland.  Note that in November the low winter sun seemingly never gets above this building so it is next to impossible to get a decent photo of it.

Next up was the Trevi Fountain.  We had both seen it before and both remembered it as being more impressive than it is (I know, I know, jaded much?).  In our defense, the crowds milling about and trying to take selfies probably adversely impacted our impression of the fountain.

After that, we walked by the Spanish steps.  Again, not as impressive as we remembered.  Even if they no longer allow people to sit on the steps while enjoying a gelato.  And, the low winter sun prevented us from getting any photos at all.

Next up was the Piazza del Popolo, a big square in the heart of the city.  The name literally translates as the People’s Square, but it turns out the intention was to name it after the poplar trees that grow nearby.  Apparently, the square used to be the site of public executions.  It is also the site of an Egyptian obelisk originally brought to Rome in 10 B.C.  Strangely, the obelisk has a cross on it.  Pretty sure neither the Egyptians nor the ancient Romans put the cross there…

Obelisk in Piazza del Popolo,  Whose bright idea was it to put a cell phone add up in the square?

After that, we walked to the Pantheon (not the Parthenon, which is in Greece).  This former Roman temple, now church, has a huge dome with a big opening at the top.  In fact, to this day, the Pantheon has the world’s largest unreinforced concrete dome.  The story goes nobody knew how to close the dome without the whole thing collapsing, so they left it open.  I’m not sure if that is true, but in any event, if the dome were made with modern day concrete it would collapse under its own weight.  Somehow, the ancient Romans knew to make it with concrete that got lighter and thinner as the dome increased in size.

The front of the Pantheon.  Somehow, neither one of us bothered to take a photo of the dome.  Rookie mistake…  You would think we would know better by now.

Creepy fountain in front of the Pantheon.

Our last sightseeing stop of the day was Piazza Navona.  This is a square with a massive fountain and two smaller fountains. 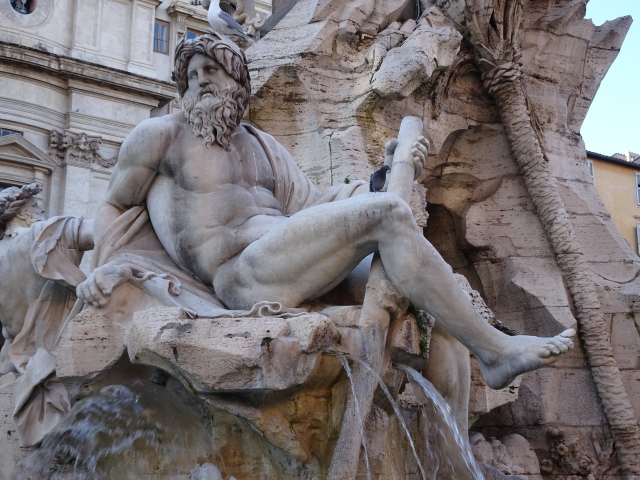 Portion of the fountain at Piazza Navona.  Check out the musculature on this guy!

Finally, to end our day, we walked over to the Trastavere neighborhood and found a wine bar (of course we did).  If you walk this route directly (and, of course, we did not because we were on the look out for gelato) it is about 5.2 miles which is not bad at all.

Lisa has a degree in biology and another in law and has spent the last 20 years working as a patent litigator. She is a voracious reader of young adult dystopian fiction and watches far too much bad tv. She loves pretty much anything to do with zombies, and doesn’t think there is anything weird about setting an alarm at 6 am on a weekend to stumble to a pub to watch her beloved Chelsea boys. Robert has had many professions, including a chef, a salesman, an IT guy and most recently, a stay at home dog dad. He speaks Italian and hopes to learn Spanish on this trip. He loves nothing more than a day spent sailing, hopes to do more scuba diving, and rues the day he introduced Lisa to football (i.e., soccer).
View all posts by theschneiduks →
This entry was posted in Italy and tagged rome. Bookmark the permalink.