Posted on December 8, 2019 by theschneiduks

Our second full day in Naples was devoted to exploring Pompeii, yet another UNESCO world heritage site.  After our miserable train ride to Herculaneum, we tried a different tactic to get to Pompeii.  We still took the Circumvesuviana train, because (a) we are too cheap to do anything else and (b) we absolutely hate group tours.  But, we got up WAY earlier and were at the train station before 8 am.

The entrance to Pompeii.

The House of the Faun.  The statue looks bigger than it is — I’m guessing it was only about 1 foot tall or so.  Check out the amazing mosaic too.

Getting up early meant we arrived at Pompeii before the gates even opened.  We HIGHLY recommend this approach — our first couple of hours at Pompeii were almost peaceful and we could easily avoid the massive tour groups. 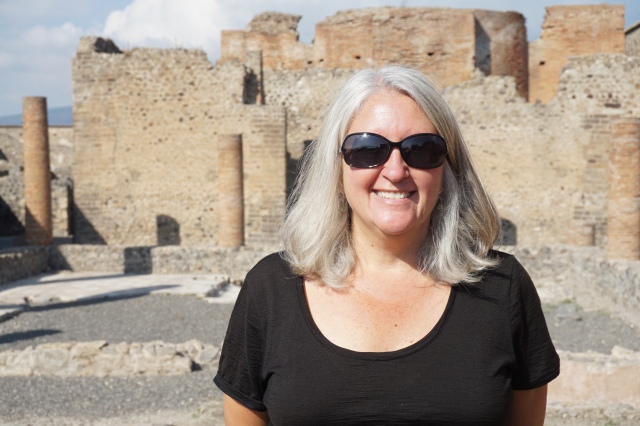 As the day went on (we managed to spend five hours at Pompeii and didn’t even see everything we wanted to see), the tour groups got more and more intrusive.  Many of the groups were 30 people strong and, trust us, you don’t want to be anywhere near them.  And, you certainly don’t want to be in one of those groups traipsing around following someone with a flag like a lost puppy dog (even if you probably do learn and understand far more about Pompeii than we did).

Casa del Menandro, one of the richest and most amazing homes in Pompeii.

We also highly recommend making a plan so you see what is most important to you first before the crowds arrive.  Our plan was simple — make a beeline for the brothel (yep, this was Robert’s idea…).  Why?  It is small and supposedly there is frequently a long line to get in.  Because we went there first, we were the only ones there.  There are still cement beds in the rooms and various murals on the walls.  Sadly, historians believe most of the women (and men) working the brothels were slaves.

Image on the wall of the brothel (lupanar).  Historians aren’t sure if these were intended to arouse or intended to depict the services available.

After the brothel, we headed straight to the very back of the park and then worked our way mainly forward in an attempt to avoid the crowds.

View of Mount Vesuvius from Pompeii.  We visited on a cloudy day so couldn’t see Vesuvius very clearly.  On the other hand, the clouds kept the temperatures low.

Occasionally, we had to deviate from our plan to see something of particular interest.  But, overall, our technique worked out pretty well, except at some of the tourist hot spots like the grand theater.

Casa degli Epidii — another of the large homes in Pompeii.

So, what else do you need to know about Pompeii (or, in other words, what else can I say to have room to show off more photos)?  Well, Pompeii was — like Herculaneum — most likely founded in the 6th or 7th century B.C.  It most likely originated as a Greek city and became a Roman colony in 80 B.C., after joining an unsuccessful rebellion against the Romans.

A beautiful fresco on the ceiling of the Terme Stabiane (baths).

Prior to the eruption of Mount Vesuvius, Pompeii had a population of somewhere between 10,000-20,000 people.  Nero himself probably had a vacation home in Pompeii.

Robert in the coliseum at Pompeii.

The residents of Pompeii might (this one is up for debate) not have even realized Vesuvius was a volcano, as it hadn’t erupted in something like 1800 years.  I’ve read that there wasn’t even a word for “volcano” until after Vesuvius erupted.  That said, Pompeii (and Herculaneum) were hit with a significant earthquake in 62 A.D. and numerous smaller earthquakes thereafter which today would probably be recognized as a sign of an impending eruption.

Sculpture of Daedalus at Pompeii.  Made by a Polish artist and gifted to the people of Italy, i.e., not an original component of Pompeii but still pretty cool.

And, the residents of Pompeii were unlucky.   One most days, the prevailing winds would have blown the ash cloud away from Pompeii.  But not on the day of the eruption.  When Vesuvius erupted, Pompeii was hit with ash, pumice, and other volcanic debris.  Ash fell for something like three days. 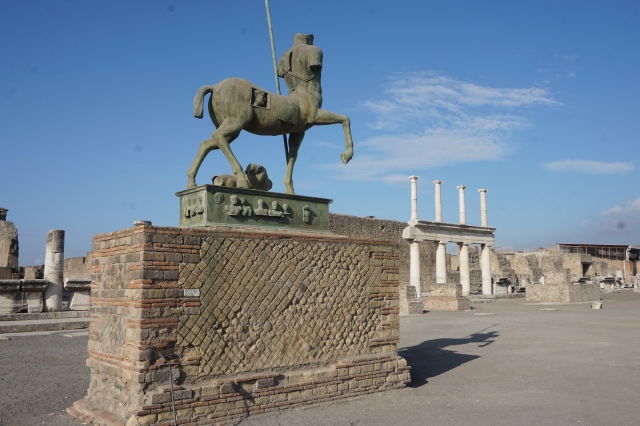 Historians estimate that around 2000 residents of Pompeii died.  Some residents were killed by the falling debris.  Those that were not killed by falling debris most likely asphyxiated as currents of hot, poisonous gas and volcanic matter hit the town.  The lava traveled at speeds of up to 68 m.p.h. and reached temperatures of up to 1300 degrees Fahrenheit.

One of the streets of Pompeii.

When the eruption was over, Pompeii was covered in approximately 20 feet of stones and ash, which protected it from vandalism, looting, and environmental impacts over the years.

A plaster cast of one of the victims of Vesuvius.

The ruins of Pompeii were first discovered late in the 16th century, but excavation didn’t start in earnest until the middle of the 18th century.  Now, something like 2.6 million people visit Pompeii each year. 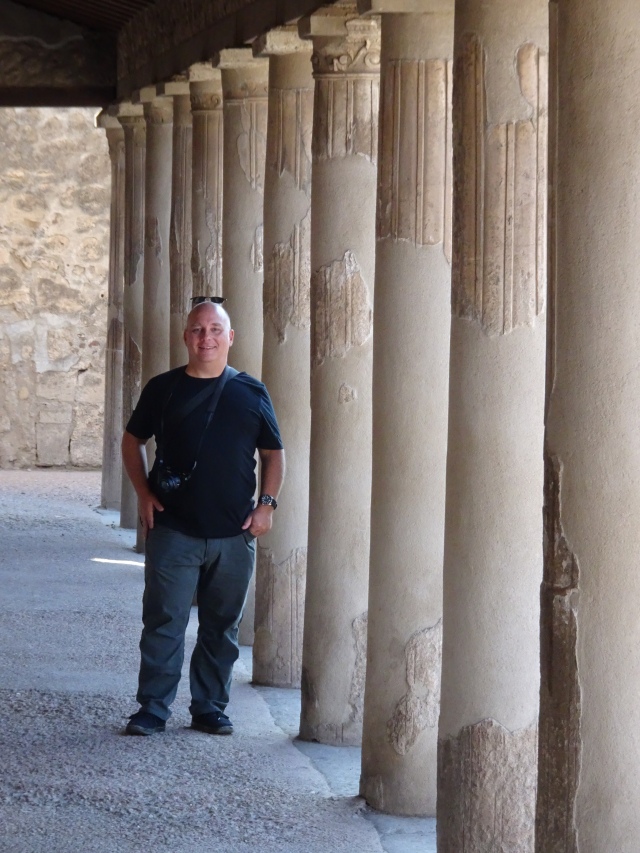 One last hint for visiting Pompeii.  Watch your belongings carefully when riding the Circumvesuviana train as it is a magnet for teams of pickpockets.  On our return journey, we watched a team of two guys case our train car, and as we exited the train we realized they were working with two women.  Fortunately for us, they were really bad at their job and we noticed them a mile a way.  But, I’m not sure everyone was so lucky….

Lisa has a degree in biology and another in law and has spent the last 20 years working as a patent litigator. She is a voracious reader of young adult dystopian fiction and watches far too much bad tv. She loves pretty much anything to do with zombies, and doesn’t think there is anything weird about setting an alarm at 6 am on a weekend to stumble to a pub to watch her beloved Chelsea boys. Robert has had many professions, including a chef, a salesman, an IT guy and most recently, a stay at home dog dad. He speaks Italian and hopes to learn Spanish on this trip. He loves nothing more than a day spent sailing, hopes to do more scuba diving, and rues the day he introduced Lisa to football (i.e., soccer).
View all posts by theschneiduks →
This entry was posted in Italy and tagged naples, unesco world heritage site. Bookmark the permalink.