Posted on December 4, 2019 by theschneiduks

Everyone has heard of Pompeii, right?  I mean, I’m pretty sure it was even discussed in Highlights magazine (remember that blast from the past?) when I was a kid.  But did you know that Mount Vesuvius destroyed another city called Herculaneum on that fateful day in 79 A.D.?  If not, no worries.  We had never even heard of Herculaneum before we started researching things to do in Naples, but once we heard about it and realized it too was a UNESCO world heritage site, a visit to Herculaneum was a must do for us.  In fact, it was how we spent our very first day in Naples.*

Herculaneum was an ancient city of roughly 4000-5000 inhabitants.  Legend has it that Herculaneum was founded by Hercules back in 1243 B.C.  I guess you have to believe in Hercules to believe that legend though.  As for when it was really founded, I’ve read several different hypotheses, but it was most likely in the 6th or 7th century B.C.

House of Relief of Telephus.  One of the largest homes in Herculaneum.

Anyway, regardless of when and who founded it, historians believe that Herculaneum was a wealthy city, even though most (I’ve read up to 80%) of Herculaneum’s residents were former slaves.

Carving at the House of Neptune and Amphitrite.

Herculaneum was seriously damaged by an earthquake in 62 A.D., and then destroyed by Mount Vesuvius in 79 A.D.  It was buried under 50-60 feet of ash when Vesuvius erupted.

Tile mosaic at the men’s section of the Central Baths.

Herculaneum was rediscovered in 1709, during the digging of a well.  Major excavations occurred in that century, but they were put on hold when Pompeii was discovered (Pompeii was buried under less ash so excavations were easier).  Even today, much of Herculaneum remains to be excavated.  In fact, just over a fifth of the site has been excavated and the remainder is still buried.

A carving found at the House of Relief of Telephus.

Wine containers at a cafe in Herculaneum.

Sometime in the 1980’s, historians discovered that, in fact, not everyone escaped the destruction of Herculaneum when some 300 skeletons were found in boat sheds on the edge of town. 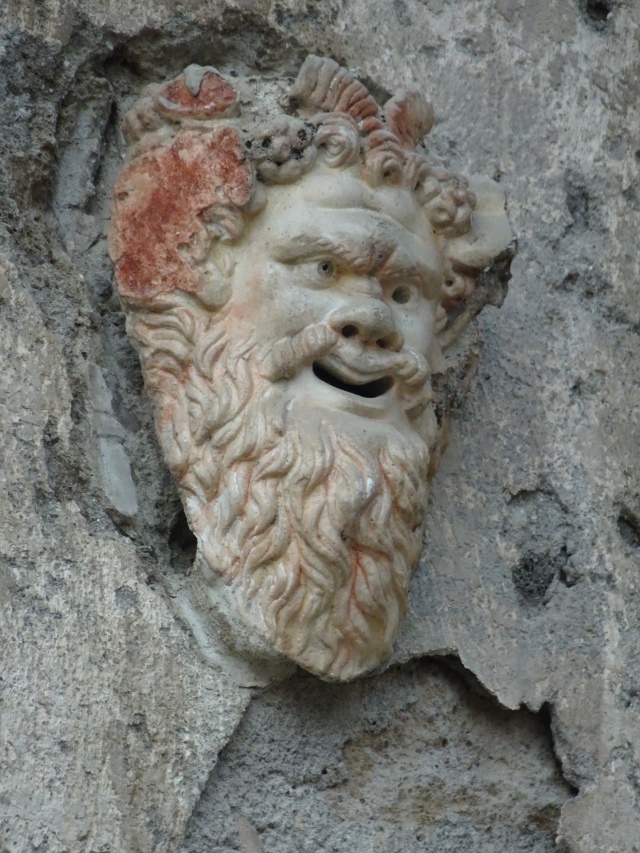 Carving at the House of Neptune and Amphitrite.

Historians believe that, when the lava and gas hit Herculaneum, temperatures were so high (numbers vary depending on source, but I’ve read anywhere from 482-760 degrees Fahrenheit), that they caused instant death to anyone left in town. 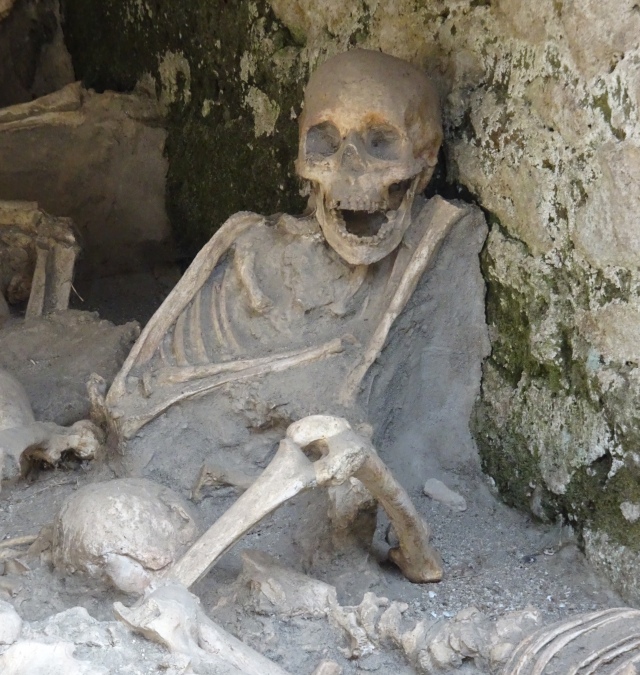 A skeleton in a boat shed at Herculaneum.

If you want to visit Herculaneum, everyone and their mother will tell you that the easiest way to get there is to take the Circumvesuviana train from Garibaldi.  Well, that certainly is the cheapest option.  As for easiest?  Nope, absolutely not.

A replica of a statue of a drunken Hercules found in the House of the Deers.

You know what they won’t tell you?  That the train around 9 am is absolutely a mob scene.  Have you ever seen the images of the guys in Japan that push people onto a crowded train?  Well, that is what the train to Herculaneum is like around 9 am.  In low season.  On a weekday.  By the time we arrived at Herculaneum, we were hot, sweaty, and very irritated.  So, whatever you do, don’t show up at the Circumvesuviana train station around 9 am.   Go earlier, go later, or go to the very first stop on the train route — trust us on this one.  More on that in our upcoming post about Pompeii.

*  Note:  The information available on the internet about Herculaneum and Pompeii is inconsistent, to say the least.  Heck, scientists can’t even agree on what day Vesuvius erupted (originally thought to be in August, now looking more like October).  So, while we tried to be careful and only write about things that seem to be generally agreed upon or note when there are different views, we don’t vouch for the accuracy of any of the facts in our posts about Herculaneum and Pompeii.

Lisa has a degree in biology and another in law and has spent the last 20 years working as a patent litigator. She is a voracious reader of young adult dystopian fiction and watches far too much bad tv. She loves pretty much anything to do with zombies, and doesn’t think there is anything weird about setting an alarm at 6 am on a weekend to stumble to a pub to watch her beloved Chelsea boys. Robert has had many professions, including a chef, a salesman, an IT guy and most recently, a stay at home dog dad. He speaks Italian and hopes to learn Spanish on this trip. He loves nothing more than a day spent sailing, hopes to do more scuba diving, and rues the day he introduced Lisa to football (i.e., soccer).
View all posts by theschneiduks →
This entry was posted in Italy and tagged naples, unesco world heritage site. Bookmark the permalink.