Falling in love with Bordeaux

Posted on December 1, 2019 by theschneiduks

We should have known we would fall in love with Bordeaux.  Something like half of the city is a UNESCO world heritage site, and you know how we love those.  And, as it turned out, we absolutely adored Bordeaux.  Even if it was cloudy and rainy for a big part of our stay.  And, even if we both decided that Bordeaux wines aren’t even close to our favorite wines (sacrilege, I know).

Bordeaux has some amazing old architecture.  You can walk in pretty much any direction and stumble upon something pretty cool.  We both loved La Grosse Cloche (the Big Bell), one of the oldest belfries in all of France.  The building was once used as both a gateway to the city and as a prison.  The gate was constructed in the 13th century, the belfry was constructed in the 15th century, and the current bell was cast in the 18th century. 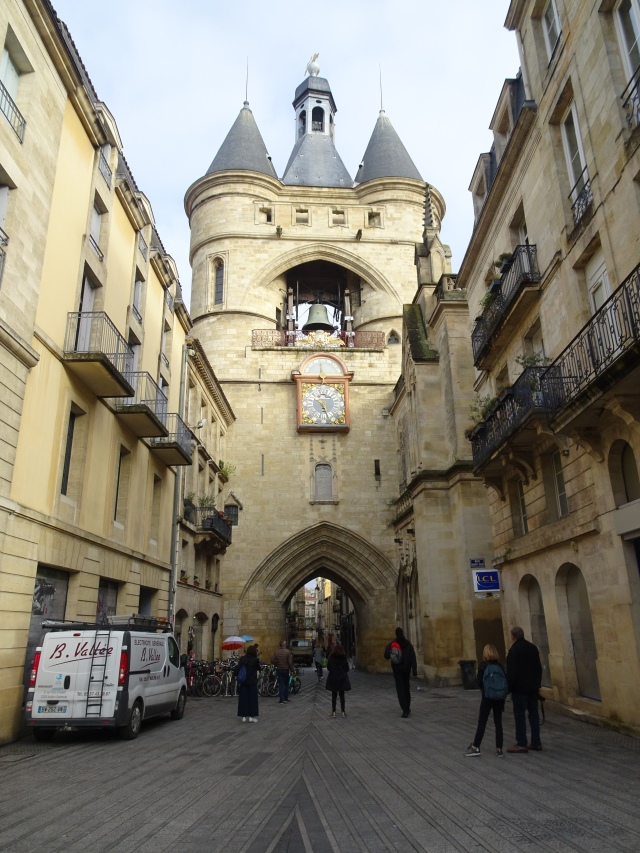 The Basilica of St. Michael was also amazing.  It was built between the 14th and 16th centuries.  The freestanding bell tower stands 114 meters high and can be seen from all over the city. 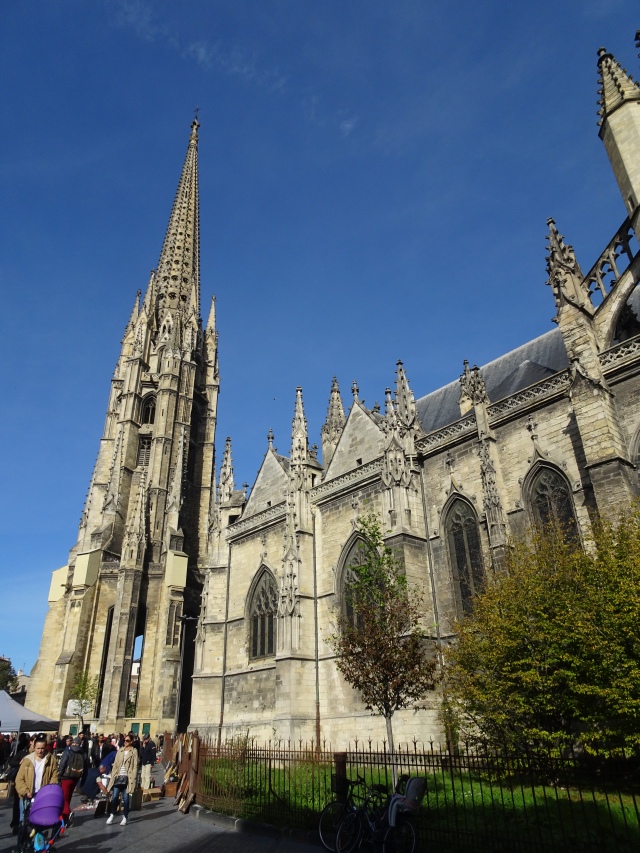 Basilica of St. Michel in Bordeaux.

Pretty much everywhere you look there is something interesting.  We stumbled upon a church one day as we were out walking around — no idea of what it was called — and spotted this fantastic moss-covered carving. 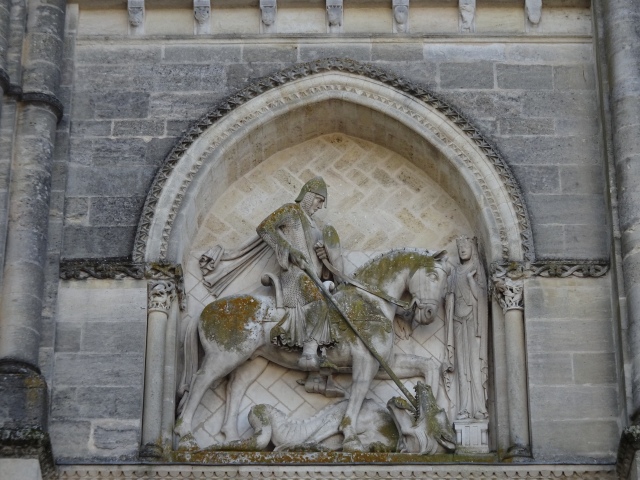 Carving on the outside of a random church in Bordeaux.

Another highlight is the Fountaine des Girondins, a huge fountain built in the late 19th century.  The Girondists, as I understand it, were one of the groups who initially supported the French Revolution.  However, at some point, they become opposed to the Revolution and were thereafter executed, marking the beginning of the Reign of Terror.  Anyway, the Nazi’s apparently took down the fountain during WWII, presumably with the intention of melting it down and making cannons.  That said, the various pieces were found intact after the war and put back in place in 1968. 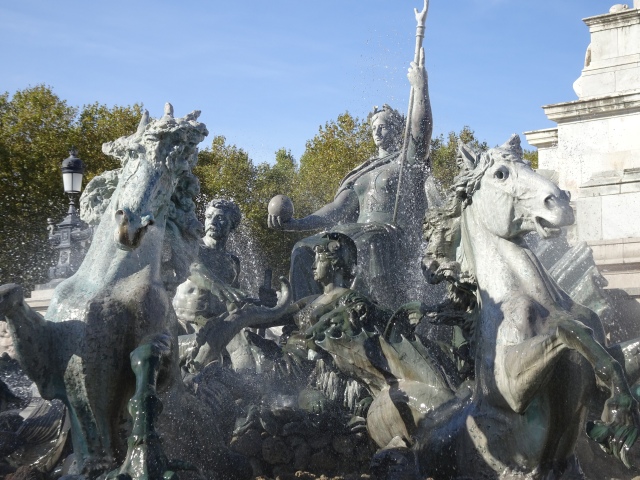 A small part of the Fountaine des Girondins.

But, it isn’t all old architecture and history in Bordeaux.  There is also an amazing market called Marche des Capucins (also known as “the belly of Bordeaux”).  It is the largest market in Bordeaux and the offerings looked fantastic — there were meats, and cheeses, and seafood, and breads, and pates, and fruits, and vegetables.  But the best part is Chez Jean-Mi, which is a friendly little cafe (yes, they will let you butcher French and even smile at you for trying but they also speak perfect English) where you can get six oysters, a glass of some of the best white wine we had in Bordeaux, and a basket of bread for just E8.50. 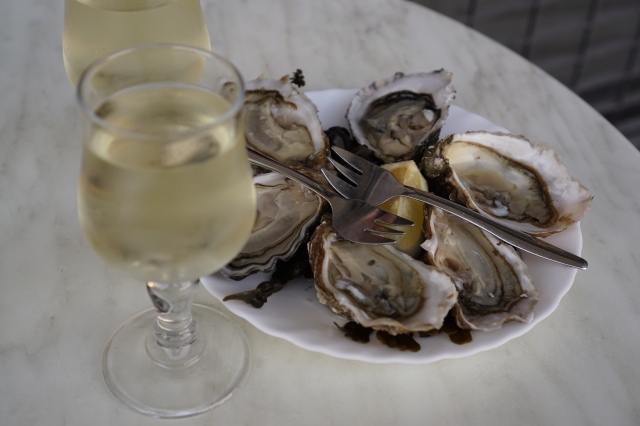 There is also some very contemporary architecture in Bordeaux.  In fact, one of the main tourist attractions is the Cite du Vin, an interactive wine experience that just opened in 2016.  When we visited, one floor was devoted to a temporary exhibit about the wine of Argentina.  We thought it was very well done, we learned quite a bit, and it made both of us want to visit Argentina ASAP.  But neither of were very enamored with the permanent exhibits.  When you enter the permanent exhibit, you are given a headset and a hand-held device and then you basically just walk around listening to and watching various videos.  Some of the videos (like an introduction to all the wine regions of the world) were interesting, but others were just plain stupid (like video of actors playing various dead famous people talking about wine). 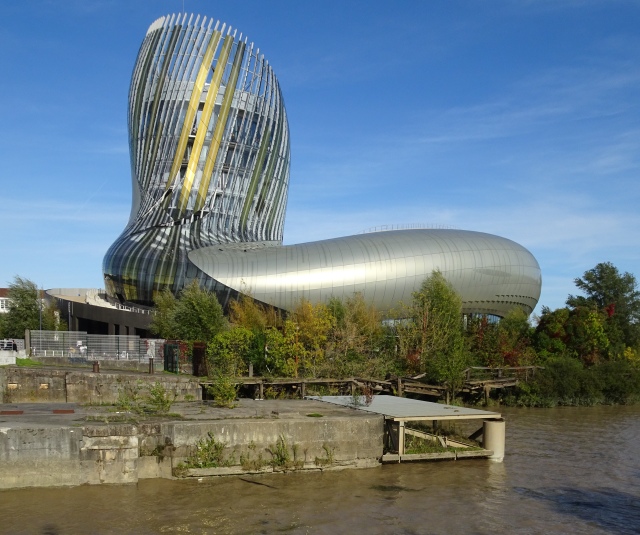 There wasn’t a ton of street art in Bordeaux (at least in the parts of the city we managed to visit), but we did spot a few fun things.  Like this lift house on the river. 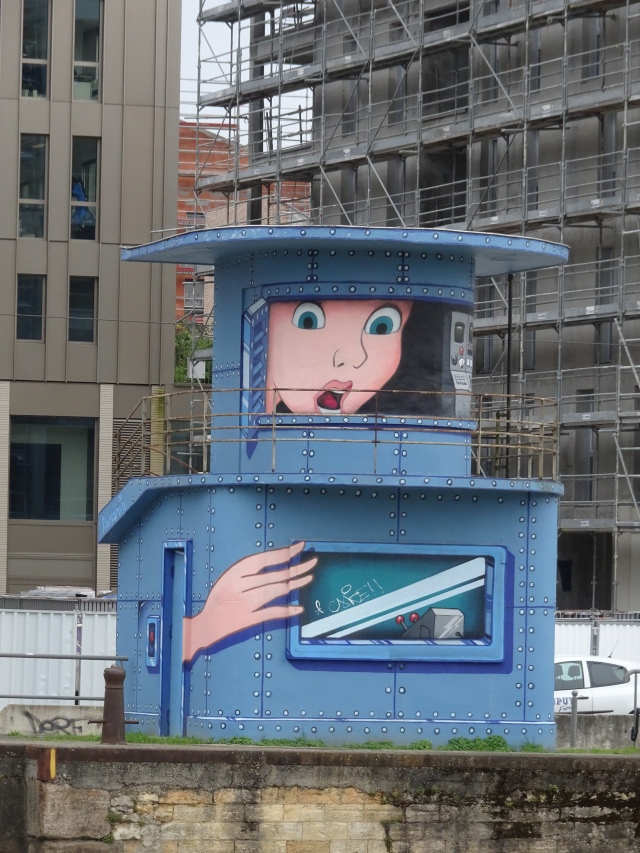 And, no trip to Bordeaux would be complete without a quick walk by a replica of the Statue of Liberty. 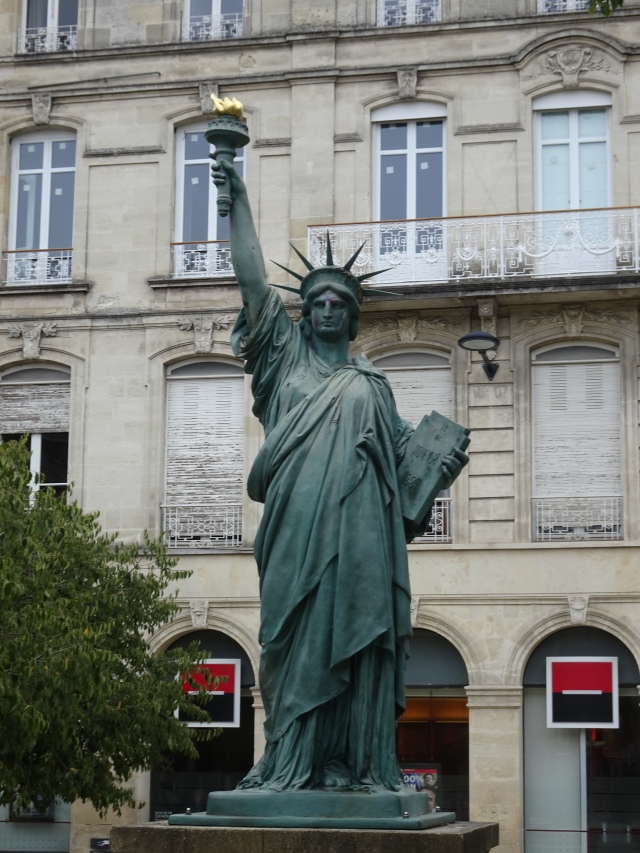 Replica of the Statue of Liberty in Bordeaux.  It is hard to see, but her face is painted with the French flag.

Bordeaux, we will be back.

Lisa has a degree in biology and another in law and has spent the last 20 years working as a patent litigator. She is a voracious reader of young adult dystopian fiction and watches far too much bad tv. She loves pretty much anything to do with zombies, and doesn’t think there is anything weird about setting an alarm at 6 am on a weekend to stumble to a pub to watch her beloved Chelsea boys. Robert has had many professions, including a chef, a salesman, an IT guy and most recently, a stay at home dog dad. He speaks Italian and hopes to learn Spanish on this trip. He loves nothing more than a day spent sailing, hopes to do more scuba diving, and rues the day he introduced Lisa to football (i.e., soccer).
View all posts by theschneiduks →
This entry was posted in France and tagged Bordeaux, unesco world heritage site. Bookmark the permalink.