A glimpse of Marseilles

Posted on November 24, 2019 by theschneiduks

OK, I’m going to be brutally honest here.  We so did not fall in love with Marseilles (spelled with an s at the end in English and without the s in French).  Don’t get me wrong.  Parts of Marseilles are beautiful.  The views from the Basilica, for example.

Cathedral Sainte-Marie-Majeure de Marseille, as seen from the Basilica.  First built in the 12th century and then rebuilt in the 19th century, it, like almost every old building we’ve seen in France, was under renovation.

And, the waterfront with its cafes, sailboats, and two forts. 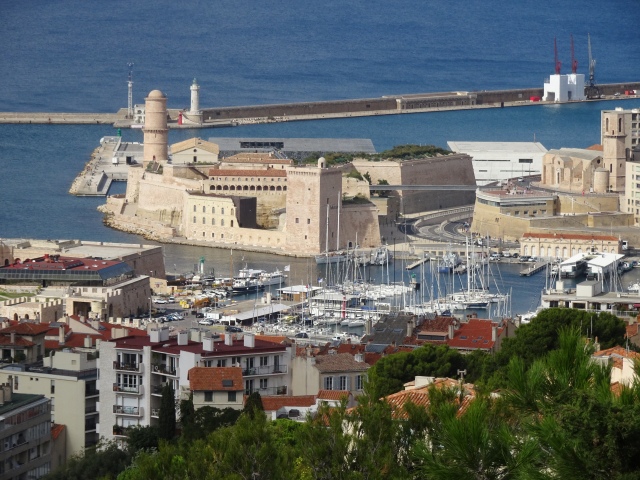 And, the Palais Longchamps.

Palais Longchamps.  Built in the 19th Century, it celebrates an engineering feat of bringing water from a local river to Marseilles.  Again, the front entrance was under construction so there was no way to get a photo from straight on.

But parts of Marseilles are just plain weird, and not necessarily in a good way.  Like the “funny zoo,” which is an old zoo — that must have been completely depressing back in the day — where the animals have been replaced with colorful fiberglass replicas. And, they think anchovies and Emmenthal cheese belong on pizza in Marseilles.  Ugh.

Colorful bears at the funny zoo.

But, more seriously, Marseilles is gritty and it is dirty and parts of it smell distinctly like pee.   Although there is graffiti everywhere, most of the street art just isn’t that good.

One of the better pieces of street art in Marseilles.

And, oddly, once you get away from the tourist district, it seems to be predominantly men on the streets and in cafes and and those men are basically just loitering.  It was the first place we have been in a long time where we didn’t feel entirely safe.  We actually got spat at one night as we walked home.  No clue if it was because we were white or because we were tourists or if it was because I am a woman or if it was because they just didn’t recognize us.  And, our friends witnessed a riot from their apartment window with men beating up other men with sticks.

The Basilica in Marseilles.

So, while we would come back and give Marseilles another chance (particularly in better weather when we could get out onto the water), we aren’t putting Marseilles high on our list of places to return to.

Lisa has a degree in biology and another in law and has spent the last 20 years working as a patent litigator. She is a voracious reader of young adult dystopian fiction and watches far too much bad tv. She loves pretty much anything to do with zombies, and doesn’t think there is anything weird about setting an alarm at 6 am on a weekend to stumble to a pub to watch her beloved Chelsea boys. Robert has had many professions, including a chef, a salesman, an IT guy and most recently, a stay at home dog dad. He speaks Italian and hopes to learn Spanish on this trip. He loves nothing more than a day spent sailing, hopes to do more scuba diving, and rues the day he introduced Lisa to football (i.e., soccer).
View all posts by theschneiduks →
This entry was posted in France and tagged marseilles. Bookmark the permalink.