Posted on November 10, 2019 by theschneiduks

We’ve left Spain for France so that must mean it is time for final thoughts.  Once again, our final thoughts are somewhat limited, as we only visited Seville, Valencia, and Cadiz (for part of a day).  But, that has never stopped us before, so here goes!

We absolutely fell in love with Spain.  The people were friendly, the scenery was amazing, the conveniences were modern, the transportation options were plentiful and easy, and the food (at least in Seville) was outstanding.  I even spent a few minutes looking into retirement visas… 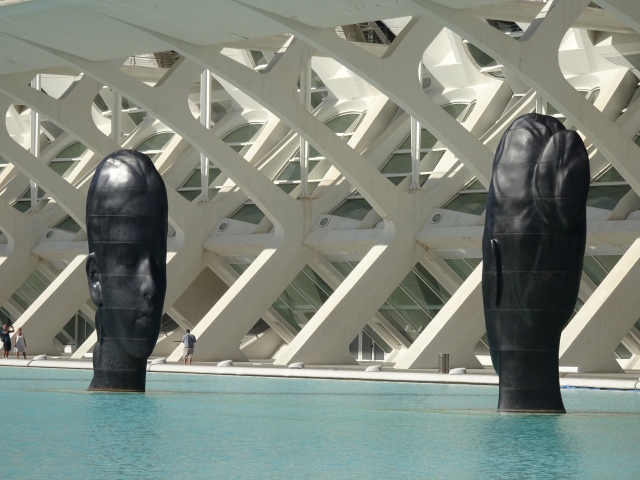 Art at the City of Arts and Sciences in Valencia.

But, we didn’t love the smoking.  Far too many people smoke and we had forgotten how annoying that can be.  And, Robert most definitely did not love the 33 cl beers.  (He says “they are just not right.”)

We had some real difficulty remembering we are in “retirement” mode, not “vacation” mode.  There is just so much to do and see in Spain.  I wanted to go, go, go.  Robert wanted to just sit back and relax.  Some days, it was a challenge….

Art in Turia Garden in Valencia.

We were shocked at how different Seville and Valencia were.  First, Seville felt like a quaint small town.  Valencia felt like a big city.  And, the two cities really aren’t that different in population.  The numbers we saw (thanks Wiki) indicate the population of Seville is abut 700,000 and that the population of Valencia is about 800,000.  So, you wouldn’t think they would feel so different.  But they did.  Seville seemed much friendlier than Valencia — there were always locals at the bars and restaurants (well, except the night we splurged on expensive and not very good pizza in the heart of the tourist district) and everyone was happy to let us butcher Spanish.  In Valencia, the locals seemed to avoid the tourist area like the plague and in one instance actually yelled at our street art tour guide for bringing tourists into the neighborhood.  They also answered us in English about 50% of the time.  And, Valencia seemed far more expensive that Seville.  As just one example, we could get churros and chocolate in Seville for about 3 Euro, whereas in Valencia it would cost about 5 Euro.  That is a huge difference for what is effectively the same thing.

A gargoyle on the Silk Exchange in Valencia.

Apparently, most of the tourists in Valencia are downright rude.  How do I know that?  Well, I ordered gelato one day (of course I did) and I managed to do it all in Spanish.  Which, let me tell you, isn’t very hard.  I can order gelato in several languages (of course I can) because the words for “cone” and “cup” and “small” and “medium” and “large” are always on the menu and there are always signs listing the flavors.  So, all you really need to know is “please” and “thank you” and “with” and, if you want more than one flavor, “and.”  Easy peasy, right?  Well, after my transaction was complete, the clerk smiled and said to me in perfect English “thank you for being such a good person.”  And, one day after Robert ordered us some nuts in Spanish, the clerk actually smiled and told him “good job” at the end of the transaction.  If we got such nice compliments just for trying to be polite and speak the local language, I can only imagine what most of the tourists are like. 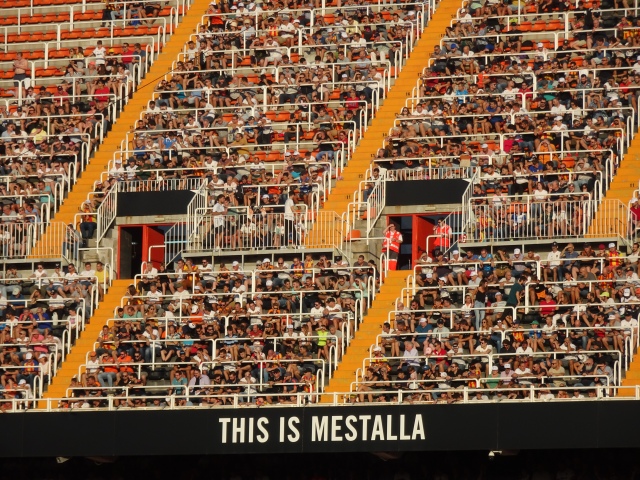 At the soccer match in Valencia.

Here is something weird.  In Spain, whenever Robert ordered an appetizer and I didn’t, my main came out with his appetizer.  When we once asked the waitstaff to serve my main with Robert’s main, they were a bit confused.

Waitstaff also generally ask for your drink order before they even give you a menu.  Given that every restaurant generally has the same drinks (Coke, coffee, wine, beer), I guess nobody really needs to look at a menu.

We were shocked to see locals drinking bottles and bottles of coke.  Coke drinking used to be how you singled out Americans.  Not anymore…. (Thankfully, nobody seemed to be serving Coke Light so my Diet Coke habit has not returned).

Anyone who claims you can identify an American by their clothes or tennis shoes has never been to Spain.

They have “Tex-Mex” Doritos in Spain.  Yes, we tried them.  No, they aren’t as good as Nacho Cheese.

But you know what they really don’t have in Spain?  Sugar snap peas.  We had apartments the entire time we were in Spain and couldn’t find sugar snap peas anywhere.  Ultimately, we found them at the Central Market in Valencia, but only two or three vendors sold them.

I’m not sure I could ever get used to the eating schedule in Spain.  And, I’m quite confident I couldn’t get used to eating tapas while standing.

Finding a tv in a bar is difficult.  The Irish pubs, of course, have them.  But most bars do not have tv’s.  So, if you want to watch football, your only real option is an Irish pub.  And, oddly, most places don’t play music either.

At the fish market in Cadiz.

Watch the bread charge in Spain.  Many restaurants will charge a Euro or so for “bread.”  Whether you want bread or not.  And, if you say you don’t want bread, they will probably charge you the Euro anyway and call it a service charge.  So, my advice is go ahead and get the bread.  Most of the time they come with tiny little breadstick-like things that are amazing.

A statue in Italica.

The flies in Spain are out of control.  They are everywhere and they are aggressive.  We didn’t like the flies at all.

Cars actually stop for pedestrians in sidewalks.  If you even look like you are considering crossing the street, the cars will stop.  It was wonderful. 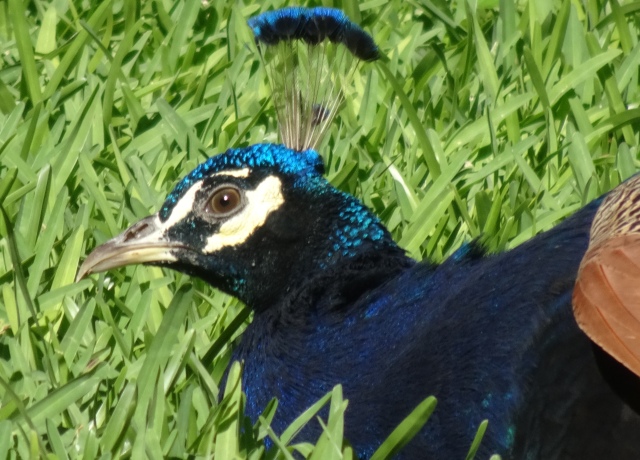 A peacock at the Alcazar.

Turns out Spanish people don’t really drink sangria.  Sangria is reserved for parties when big batches can be prepared properly.  So, if you see someone drinking sangria, it is probably a tourist.  Instead, Spanish people will be drinking tinto de verano, which is red wine with Fanta Limon or Sprite or, sometimes, Fanta Orange.  It is surprisingly good.

There are two interesting phrases you will learn if you spend any time in Spain.  One is “cafe solo,” which means black coffee (no milk, no sugar).  The other is “vale” which means ok — people say it nonstop.

We were pleasantly surprised with the state of the bathrooms in Spain.  No bathroom fees and clean bathrooms.  A nice change after spending so much time in Asia. 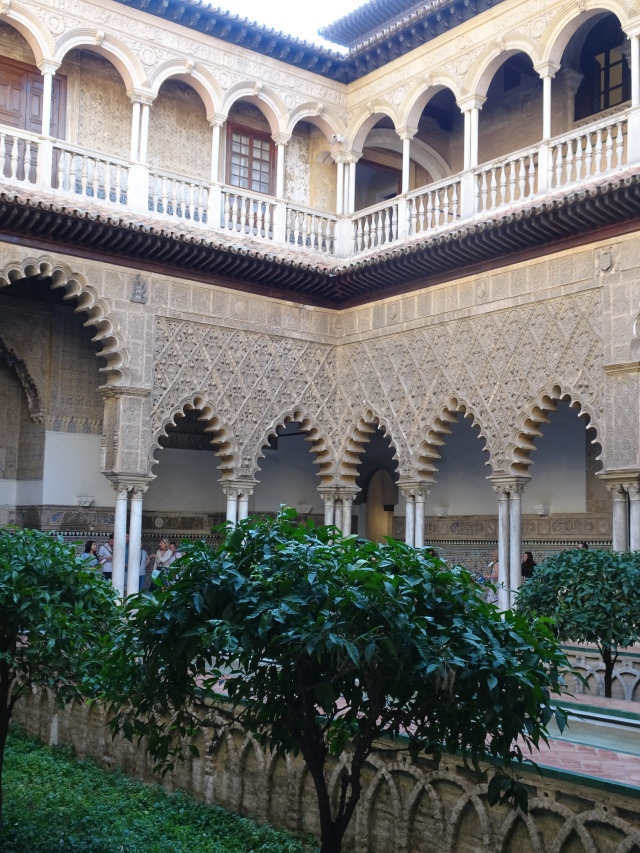 The Alcazar in Seville.

We were both surprised by how desert-like Southern Spain is.  Lots of brown.  Lots of palm trees.

Lisa has a degree in biology and another in law and has spent the last 20 years working as a patent litigator. She is a voracious reader of young adult dystopian fiction and watches far too much bad tv. She loves pretty much anything to do with zombies, and doesn’t think there is anything weird about setting an alarm at 6 am on a weekend to stumble to a pub to watch her beloved Chelsea boys. Robert has had many professions, including a chef, a salesman, an IT guy and most recently, a stay at home dog dad. He speaks Italian and hopes to learn Spanish on this trip. He loves nothing more than a day spent sailing, hopes to do more scuba diving, and rues the day he introduced Lisa to football (i.e., soccer).
View all posts by theschneiduks →
This entry was posted in Final Thoughts, Spain and tagged cadiz, Seville, valencia. Bookmark the permalink.