What to eat in Seville

Seville is a food lover’s paradise.  But, first, you have to get on the Spainish schedule.  What is the Spainish schedule you may ask?  Well, first breakfast (or desayuno)  is from around 7 until around 9 and typically something small.  We never made it out of bed for first breakfast.  Second breakfast (or almuerzo)  is around 10:30 to around 11:30.  This is often some sort of sandwich or churros.  And, you will often see locals having a small beer with second breakfast.  Lunch (or comida) is generally from about 2 to about 4 and is the biggest meal of the day.  Comida literally translates as “food” which tells you something about how important lunch is to the Spanish.  Then there is snack time (or merienda) around 5 and that is usually something sweet like churros or something cured like a small ham sandwich.  Dinner (or cena) doesn’t start until 8 and most people wouldn’t think about dinner until 9 or so.  Got it?  It was a real struggle for us (ok, for me) to get on the Spanish timetable.

Yema sobre bizcocho de boletus y vino caramelizado at Eslava.  It is a slow cooked egg on (I think) a mushroom cake with a caramelized wine reduction.  Robert said it was delicious — I didn’t get near it.  I do have to admit it was pretty….

So, what do you have to eat in Seville?

We generally had churros during almuerzo time.  Who knew churros get their name from the fact that they were allegedly first made by Spanish sheepherders herding Churra sheep?  Well, that is the story anyway…..  The churros are far more savory than you would expect in the U.S. (and typically not doused in cinnamon and sugar) but dipped into amazingly thick hot chocolate they are perfect (think of something resembling a warm chocolate pudding, not the hot chocolate you drink in the winter).  We found that there are two different types of churros here in Seville.  Most are quite thick but they also make little ones called churros de patate.  I thought the churros at Churreria La Esperanza (in the Macarena neighborhood) and La Centuria (near the Setas) were the best, and Robert really liked Cafeteria Bar El Pilar (honestly, I have no idea what neighborhood this was in, but it is on google maps) and La Centuria.

Churros at Churreria La Esperanza.  This place was a block from our apartment and the family that owned it was super friendly.

Robert was also a fan of the tostadas for almuerzo time.  They come in all different types, but some variety of ham seems to be the most popular.  If you are a millennial you are covered too, as they have avocado tostadas as well.

Avocado and jamon tostados at Kiosco Los Leones on the Alameda de Hercules.

Moving on to tapas….  Tapas bars are everywhere and it is perfectly acceptable to have a tapa and a drink at one bar and then move on to the next for their specialty.  In fact, there is even a name for a tapas crawl.  It is called a tapeo.  Tapas are traditionally more of a dinner item than a lunch item, but you can — and we did — have tapas for lunch too.

First, you must, must eat jamon iberico.  Jamon iberico comes only from a special breed of Iberian pig known as pata negra.  The best jamon iberico is jamon iberico de bellota.  These pigs eat 6-7 kilograms of acorns per day for the final three months or so of their lives during a period known as montanera (the time when acorns fall from the trees).   The acorns are rich in oleic acid (also found in olives) and the flavor finds its way into the meat.  Once the pigs have reached the required weight, they are slaughtered.  The legs are cured for up to three years and the result is one of the most delicious things you will ever taste.  A good jamon iberico de bellota will pretty much just melt in your mouth.  You will find jamon iberico de bellota all over town, but our favorite was at Casa Roman and Las Teresas, both in Barrio Santa Cruz. 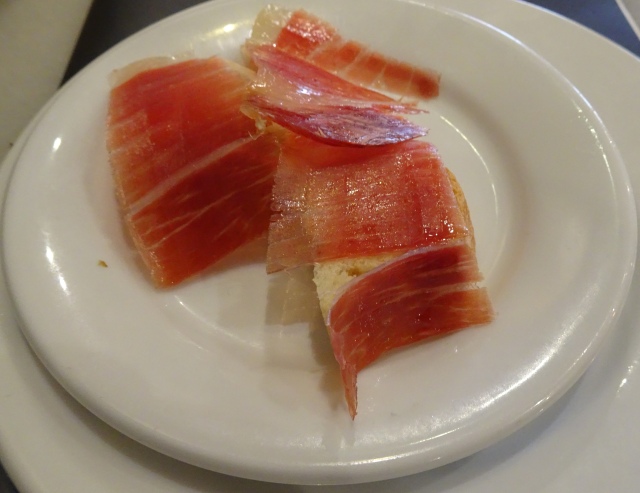 Another pork product you must try is Iberian presa.  As I understand it, presa is cut from an area from the top of the shoulder and the beginning of the loin.  It is generally served grilled with some sort of fried potato and, if you didn’t know it was pork, you might just think it was beef.  It is that rich.  We recommend the Iberian presa at Casa Roman and Bodeguita Romera in the Arenal neighborhood.  I think presa just might be what I will miss the most about Spain…. 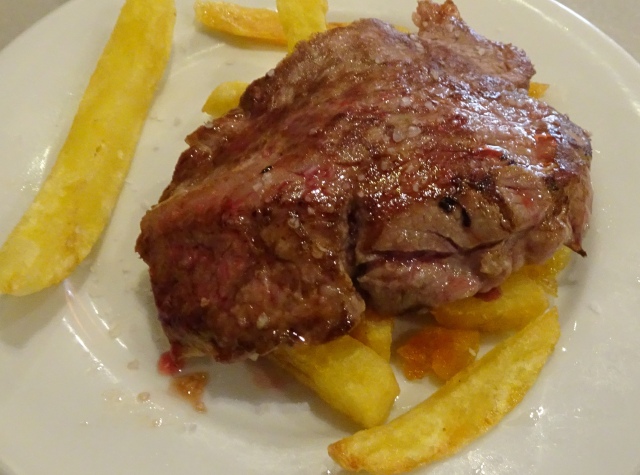 Sticking with pork for a bit, you also need to try estofado carrillada de cerdo.  In other words, stewed Iberian pig cheeks.  The cheeks are melt in your mouth tender and they are often served over a bed of fried potatoes.  Delicious!  We liked the estofado carrillada de cerdo at Casa Roman and also the carrillada at Bodeguita Romera and also the carrillada at Eslava.  In other words, we ate a ton of pork cheeks.  And, they were all outstanding. 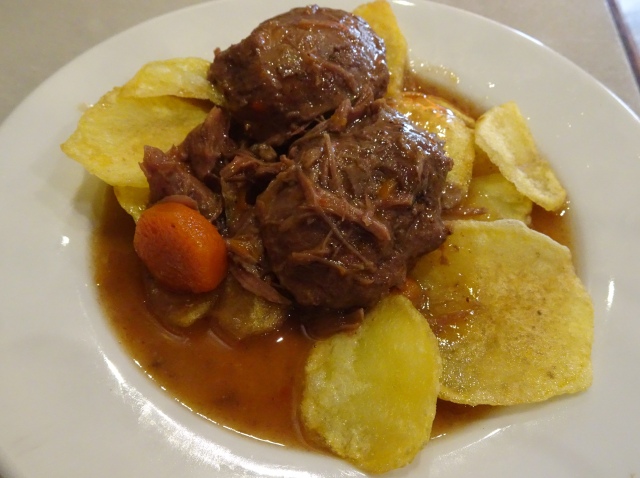 If you see potaje iberico on a menu, try it.  It is a stew — the one we had was filled with garbanzo beans and bits and pieces from the head of the pig.  We had it at Eslava (a Michelin recognized restaurant but very affordable) and we are pretty sure we earned some major brownie points by (1) ordering the potaje (especially given it wasn’t even on the English language menu) and (2) devouring it. 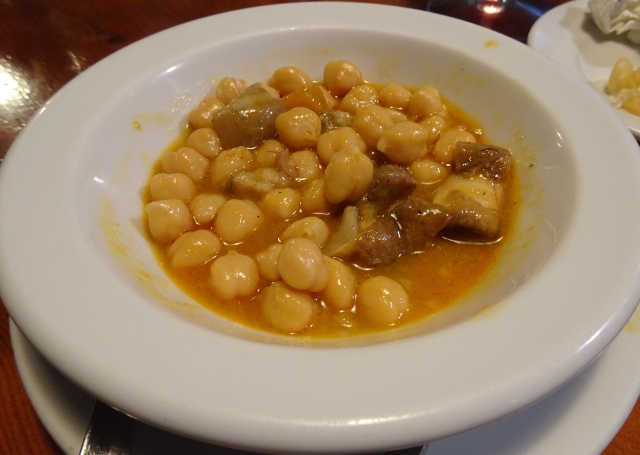 Half-eaten potaje at Eslava.  We had no idea it would be so good so we failed to take a photo before diving in…..

Oh, and Eslava has ribs!  The ribs at Eslava are cooked in honey and rosemary and are absolutely heavenly.  You must, must, must try these ribs. 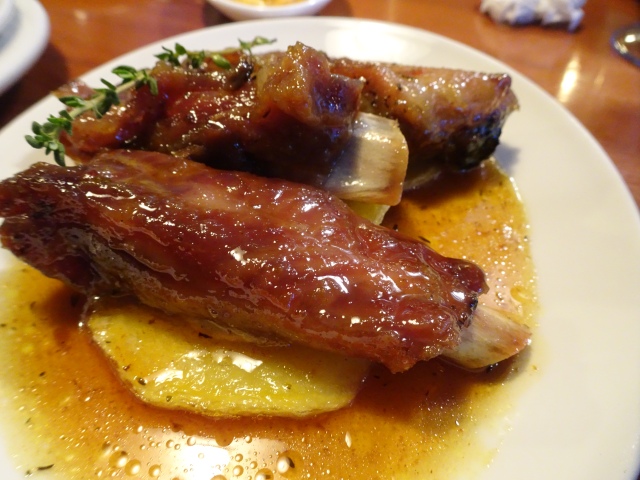 Bottom line, if there is an cut of Iberico on the menu, just try it.  Everything we had was delicious.

And, you must eat cheese.  If you like manchengo, we had amazing manchengo at a place called Casa Morales (very close to the Cathedral).  And, we had an excellent selection of cheeses at Puratasca in the Triana neighborhood.

Moving to beef, oxtail stew is another popular dish in Seville.  Robert loved it.  Me, not so much. 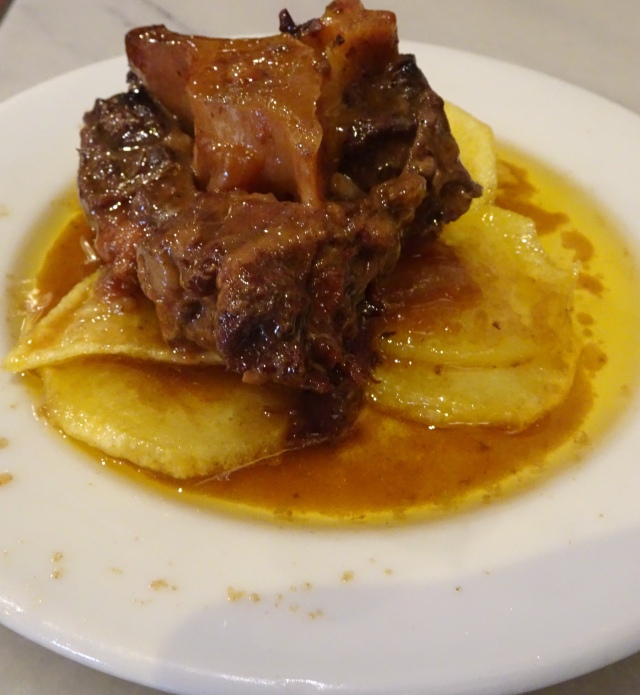 Oxtail stew at Casa Roman.  Look at all of that glistening beef fat….

There is also plenty of fish.  Robert tried fried anchovies and prawns and tuna and salmon and three different preparations of bacalao, and didn’t have a bad dish.  Although, we did have one very odd dish — we were a little taken aback when the potatoes we ordered one night came topped with canned tuna…. 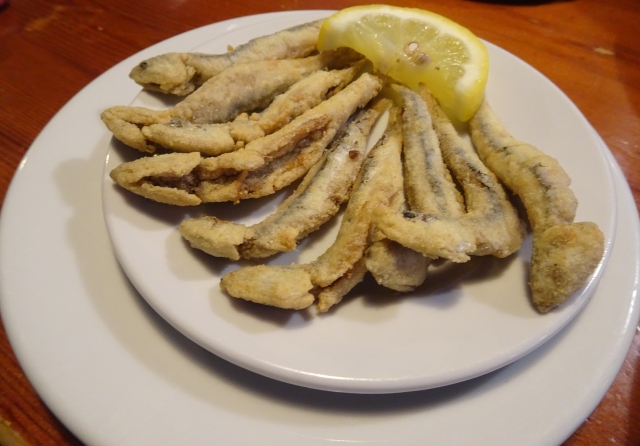 And, don’t forget about gelato for dessert.  I know Spain isn’t Italy, but the gelato is outstanding.  And, look how pretty it is!  I ate way to much gelato and sorbet at Amorino.  Yes, I know Amorino is a chain.  Yes, I know they have locations in the U.S.  I don’t care.  Their coconut gelato was some of the best I’ve ever had.  Plus, they have both dulche de leche and salted caramel.

Now, I know what you are thinking.  Right about now you are saying “But Lisa, what about the pizza.”  Well, sadly, the pizza in Seville was not very good.  We tried three different pizza places and I wouldn’t recommend any of them.  And, do not — I repeat — do not go to Slice of New York pizza.  Nope, just don’t do it.  I don’t care how much you are craving pizza.

I’m already telling myself we have to eat less in Valencia….

Lisa has a degree in biology and another in law and has spent the last 20 years working as a patent litigator. She is a voracious reader of young adult dystopian fiction and watches far too much bad tv. She loves pretty much anything to do with zombies, and doesn’t think there is anything weird about setting an alarm at 6 am on a weekend to stumble to a pub to watch her beloved Chelsea boys. Robert has had many professions, including a chef, a salesman, an IT guy and most recently, a stay at home dog dad. He speaks Italian and hopes to learn Spanish on this trip. He loves nothing more than a day spent sailing, hopes to do more scuba diving, and rues the day he introduced Lisa to football (i.e., soccer).
View all posts by theschneiduks →
This entry was posted in Spain and tagged michelin, Seville. Bookmark the permalink.