Posted on October 6, 2019 by theschneiduks

We spent a month in Puerto Vallarta.  Here are some random thoughts from our time there.

We were in Puerto Vallarta during the slowest time of the year (September).  Many of the restaurants were closed.  Some nights, we were the only couple eating at a restaurant for most of the night.  We never had a problem finding a beach chair or getting a seat at a bar or restaurant without reservations.  It was a bit strange, and I don’t know how any place stays open during September.  We met an expat who called it the “perfect season” because the streets weren’t filled with tourists.  But, we were also told that the locals call it the “hungry season” and are forced to barter for what they need because nobody has cash.  I guess it is all about one’s perspective, huh?

Iguana at the pool.

Puerto Vallarta is crawling with expats.  In fact, we were told nearly all of the businesses that cater to tourists are run by Americans or Canadians.  Sort of sad, no? Although our tour guide said nobody minded because the locals needed jobs and didn’t have the capital to start their own businesses.  He also told us everyone works for tips or commissions as the salaries are too low to live on.  It doesn’t seem like a sustainable situation. 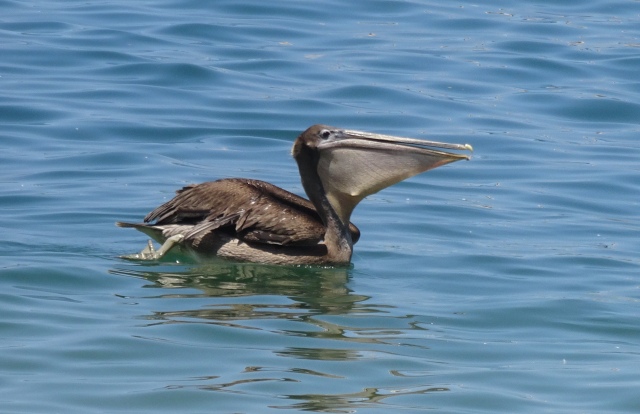 Many of the expats are downright weird.  Nearly everyone we met was a single guy.  One guy had been coming to Puerto Vallarta for extended stays for three years and was fluent in Spanish.  Yet, he was incredulous that we had taken the local bus to get around as he hadn’t yet been “brave” enough to do so.  Trust me, taking the bus doesn’t require any sort of bravery at all — the destinations are written right on the bus so you can’t even get lost.  One very drunk guy complained to us about how hard it was to find a single woman to date.  And, another guy actually got mad at us when we dared to talk to other people at the bar. 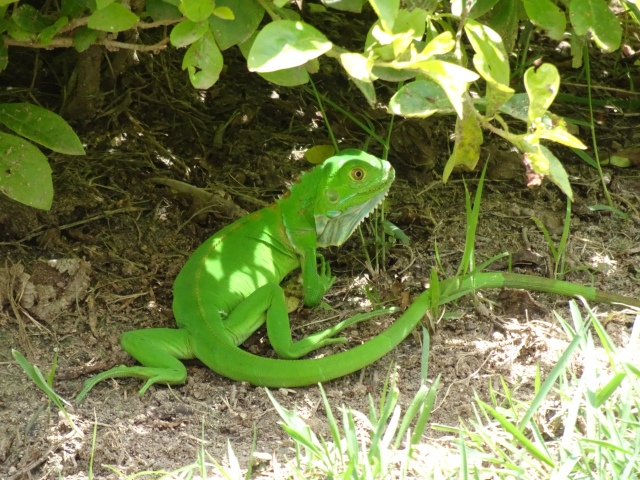 Iguana in the bushes.

We went to Puerto Vallarta largely so Robert could practice his Spanish.  Unfortunately, everyone speaks English and answered him in English.  In fact, we were told that staff are trained to speak English to tourists because it makes the tourists more comfortable.  Sad, right?  Thankfully, we did find a few people that would let Robert muddle through in Spanish (and even a few who seemed happy that he was trying). 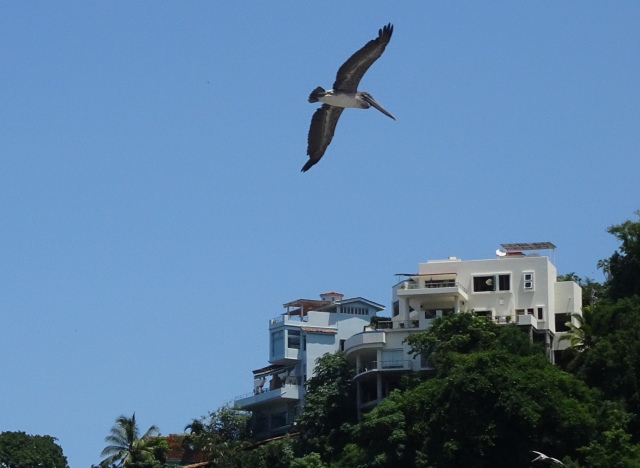 Pelican in the sky.

You know what else is sad?  Many of the bills were in both pesos and dollars.  And, there were plenty of people paying in dollars.  There are atm’s everywhere and it is easy peasy to get pesos so I don’t understand why people insist on using dollars (especially given the generally crappy exchange rate restaurants give you).

A family of ducks in the pool.

I can’t tell you how many times we confused a cerveceria with cevicheria.  A cerveceria is a beer bar so it wasn’t a catastrophe, but we were confused when they didn’t have any ceviche.  When we did find ceviche, Robert couldn’t believe he had gone without it for so long — he says the ceviche down in Puerto Vallarta is delicious.

Boy, do they love little dogs in Puerto Vallarta.  They are everywhere.  And they get carried around like babies.  We even met one who wore a bow tie, just like its dad, and another with barrettes.

An iguana in the grass.

The snack food situation is beyond weird.  It is impossible to find pretzels unless you go to an ex pat store where everything is imported.  They have something called nacho Doritos — they are not nacho cheese and they are nasty.  The Cheetos are all spicy.  But, the peanuts and pepita seeds are good.  And you can find crunchy Jif…..

The wine in Puerto Vallarta is generally reasonably priced, but often not very good.  I’ve never experienced so much “eau de outhouse” before.  I’m not sure if the wine is truly bad or just stored in incorrect conditions and badly impacted by the heat.

Art on the beach.

We made it an entire 12 days before anyone offered to sell us drugs.  That is a record.  Who are the idiots that buy illegal drugs on holiday????  Especially from random guys on the street?????

We saw the most decadent thing ever in Puerto Vallarta.  A woman had rented a beach chair and convinced the restaurant to run an electric fan out to her chair with a long extension cord.  I can’t make this up.

You have to ask for the check in a restaurant.  You will sit there for hours if you don’t ask for the bill.

Speaking of restaurants, I loved how most of them (and our beach resort) brought over little stands for my purse.  And, that it was safe enough to hang my purse from them.

As English speakers, we always thought “mañana” meant tomorrow.  And, technically, it does.  But what it really means is “yeah, not today, maybe tomorrow, maybe the next day, maybe never.”

We loved our time in Puerto Vallarta and will be back some other “hungry season.”

Lisa has a degree in biology and another in law and has spent the last 20 years working as a patent litigator. She is a voracious reader of young adult dystopian fiction and watches far too much bad tv. She loves pretty much anything to do with zombies, and doesn’t think there is anything weird about setting an alarm at 6 am on a weekend to stumble to a pub to watch her beloved Chelsea boys. Robert has had many professions, including a chef, a salesman, an IT guy and most recently, a stay at home dog dad. He speaks Italian and hopes to learn Spanish on this trip. He loves nothing more than a day spent sailing, hopes to do more scuba diving, and rues the day he introduced Lisa to football (i.e., soccer).
View all posts by theschneiduks →
This entry was posted in Final Thoughts, Mexico and tagged puerto vallarta. Bookmark the permalink.