Posted on September 15, 2019 by theschneiduks

One of our favorite things to do when we visit a new place with delicious street food is to go on a food tour.  It is a great way to get a feel for the local food and to find a venue or two with good food to use as a comparison going forward.  While in Puerto Vallarta, we booked the Tacos and Street Food Adventure with Chef’s Pass.

Our first stop was a hole-in-the-wall restaurant called Pajaritos.  It was just a couple of blocks from our apartment, but we would have no doubt never found it on our own. Pajaritos is a seafood joint and had some very interesting tacos.  Think things like fish roe tacos, octopus tacos, and shrimp wrapped in bacon tacos.  Robert loved all the tacos.  Me, not so much.  But, I did love the aqua fresca.  The restaurant makes it fresh each day and the flavor varies.  On the night we visited, it was made with some sort of local fruit we had never heard of and it was delicious. 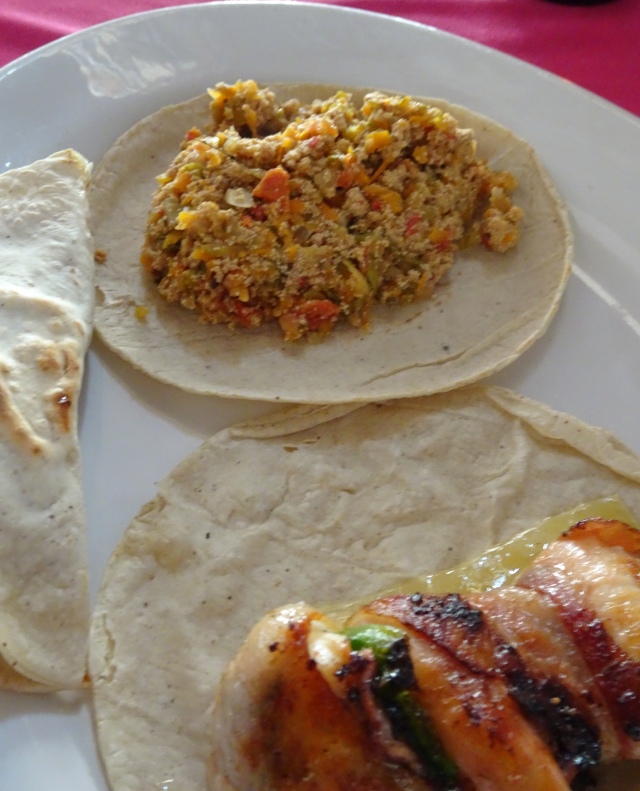 Fish roe taco, octopus wrapped in bacon taco, and a boring old bean taco on the side at Pajaritos,

Our next stop was a small little taco stand on the side of the street.  I have no idea what it is called, or if it even has a name, but you can find it right across the street from Iglesia de la Santa Cruz and the stand specializes in “tacos de cabeza” — otherwise known as tacos of the head. 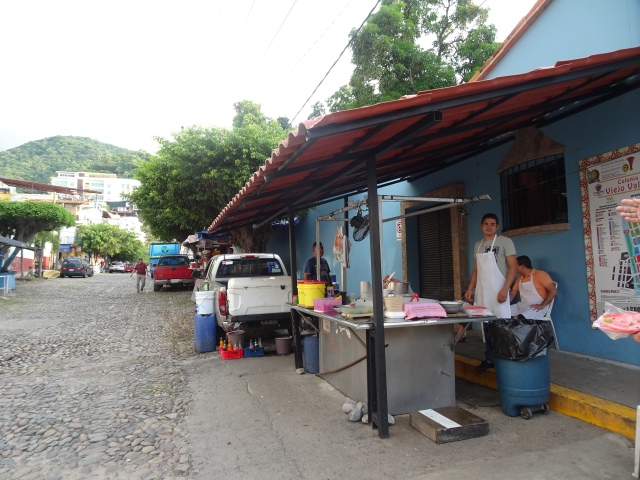 Robert had tacos made with beef tongue.  I’m not entirely sure what I had — our guide said it came from the neck of the cow and pointed right at his neck as he said it, but the name he gave us sounded like something that translates as beef cheeks (which certainly isn’t the same as the neck), and I’m just really hoping it wasn’t something gross like thyroid glands or something like that…..Oh well, it did taste good.  And, the passion fruit agua fresca was out of this world. 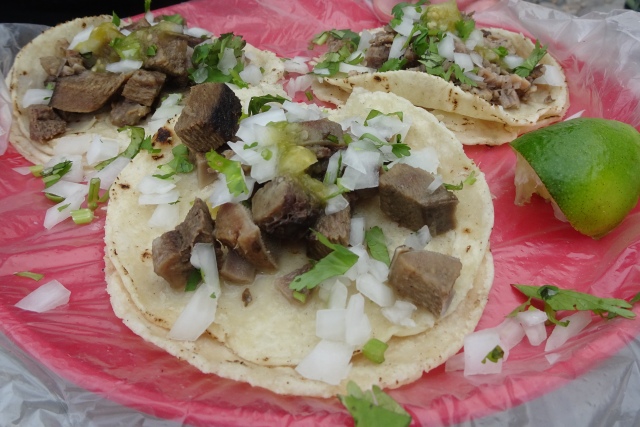 Tongue tacos at the taco stand.  See how the plate is covered in plastic?  The street stands around here don’t wash their dishes between customers.  Instead, they cover each plate with a fresh plastic sleeve.  It has to be absolutely horrible for the environment.

Stop three was a little shop called Las Gueras for more traditional tacos — al pastor (pork) and carne asada (beef).  The aqua fresca this time was made with rice (similar to, but not the same as, horchata) — it actually tasted a bit like a milk shake and was most definitely not my favorite, but Robert loved it. 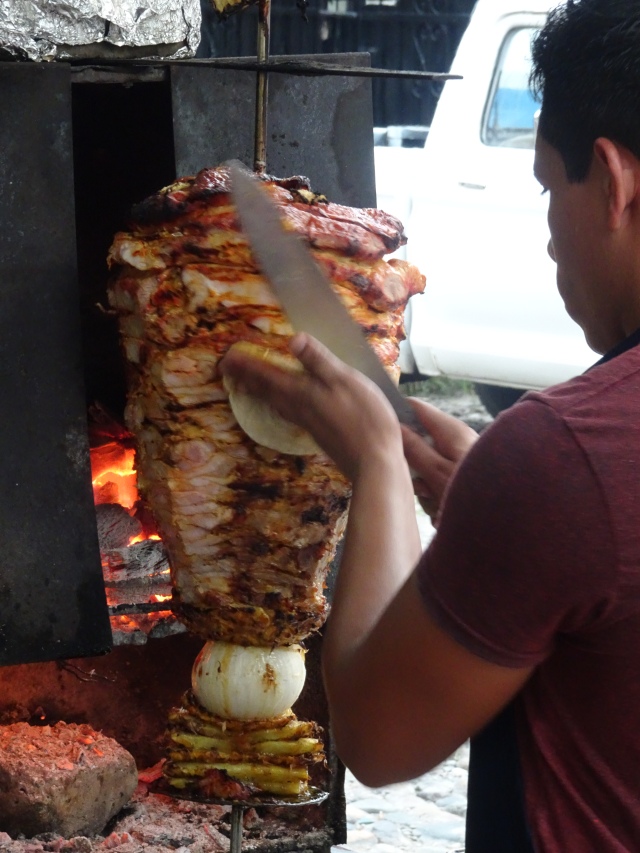 Finally, it was back to  a street vendor outside of Iglesia de la Santa Cruz  for some freshly fried churros.  Robert liked them.  I thought they were overcooked.  But, at only 10 pesos (~ 50 cents) for a bag, who can complain?  Plus we got to watch them being made — they are made kind of like a press cookie and totally reminded me of making spritz cookies.

While we enjoyed the food (Robert far more than I) and enjoyed being introduced to some places we wouldn’t have found on our own, we aren’t sure we would recommend the tour.  First, we didn’t go to nearly as many places as advertised.  Second, we were supposed to visit the tamale lady but she was completely sold out of chicken and pork tamales when we got there so we didn’t even get to try the promised tamales (don’t worry — we went to the tamale lady on our own — more on that later).  Third, with the exception of the fish roe taco, we found better tacos on our own.  And, fourth, it was outrageously overpriced.  While we left full, and our guide encouraged us to order even more than we did order, there is no way the cost of our meal plus the salary for the guide plus a reasonable profit was anywhere close to what we paid.  So, while we highly recommend taking a tour, our advice would be to try a different company.

Lisa has a degree in biology and another in law and has spent the last 20 years working as a patent litigator. She is a voracious reader of young adult dystopian fiction and watches far too much bad tv. She loves pretty much anything to do with zombies, and doesn’t think there is anything weird about setting an alarm at 6 am on a weekend to stumble to a pub to watch her beloved Chelsea boys. Robert has had many professions, including a chef, a salesman, an IT guy and most recently, a stay at home dog dad. He speaks Italian and hopes to learn Spanish on this trip. He loves nothing more than a day spent sailing, hopes to do more scuba diving, and rues the day he introduced Lisa to football (i.e., soccer).
View all posts by theschneiduks →
This entry was posted in Mexico and tagged food tour, puerto vallarta, street food. Bookmark the permalink.