First, a public service announcement.  We are currently in the United States dealing with some family issues.  The blog won’t be very active until we are back on the road again.  Not quite sure when that will be, but it could be awhile.  If you want an email notification when we post new content, enter your email address in the box on the right hand side below the drawing of the half pig/half fish and above the flag that says “enter your email address” and then click on the white “follow” button.  (We promise not to spam you).

Now, on to yet another edition of final thoughts on Thailand….

Our love of Thailand continues.  I can’t believe we once thought we didn’t like Thailand.  Now, I’m pretty sure we would move there if we were ready to settle down.  A nice apartment in Bangkok or Chiang Mai?  I’m in!

A school of what we think are some sort of yellow snapper at Richelieu Rock.  Feel free to tell us in the comments if you think we are wrong.

We love the sound of howler monkeys.  There is nothing quite like waking up to them hooting and hollering in the trees.  We could hear them in Khao Lak and on Koh Lanta and it was just lovely.

The Thais sure do love babies.  I can’t tell you how many times we saw waitstaff hold a baby so that mom and dad could enjoy their meal.  Can you even imagine that happening in the U.S.?????

Monkey see monkey do?  Seriously, there was nothing wrong with this little guy we saw on Koh Lanta and he scampered away a few moments after I took this photo.

Speaking of babies, the funniest thing happened while were visiting Khao Lak.  We were walking to dinner one night when this small boy — maybe 4 or 5 years old — came running up to Robert and embraced him in a big bear hug for a good five seconds or so.  Mom just stood there smiling.  We have no idea what that was all about….

Robert didn’t realize how much he missed cheese for dinner until we found a wine and cheese bar in Khao Lak.  He had the cheese plate twice in 10 days.  We stopped in for wine three times in 10 days — guess Robert likes wine more than he likes cheese (actually, that isn’t fair as the first time we stopped in Robert had promised me pizza for dinner and you don’t promise me pizza and then take it away from me….).

We think this might be an adult sweetlips at Richelieu Rock.  If you think otherwise, again, feel free to tell us.

We continue to be astounded by the dichotomies in Thailand.  It truly is a fairly conservative country in many respects, but in other respects it is not.  For example, you can buy birth control over the counter and some brands are as cheap as just over a dollar a month.  If only the conservatives in the U.S. would realize that ready access to birth control is a good way to lower the abortion rate instead of advocating for abstinence only education ….

One of the islands that make up Koh Haa.

You haven’t been confused until you have seen hundreds of the Kingz MG and the Vridermc Rider Motorcycle Club driving the streets of Krabi on their decked out Harley’s.  In leather chaps.  And leather vests.  In the heat and humidity of Thailand.

Last time we were in Ao Nang, we lived on Indian food.  Interestingly, the Thai food has gotten much, much better in Ao Nang, and the Indian food has gone downhill.  However, the fruit was all pretty bad — didn’t look great, overpriced, and not very flavorful.  Strange, very strange.

I’m not sure we will return to Ao Nang and, if we do, it will only be to visit our good friends Ken and Sue who like to winter there.  It is too busy and too touristy and too crowded and we just can’t deal with the multiple McDonald’s and Burger King’s and Starbuck’s within a span of a few blocks.  I think we are over Ao Nang.  Although, someone needs to explain to me why Ao Nang makes me want to drink too much cheap wine and listen to horrible cover bands until the wee hours of the night….

A batfish at Richelieu Rock..

I’m pretty sure only I could get injured getting a massage.  Nothing quite like going in for a relaxing massage and leaving covered in bruises.

Thailand does seem to be making efforts to help the environment — certain beaches are closed for recovery and the like.  However, much more needs to be done.  There are far too many snorkeling boats going to the same location — you jump in the water and are surrounded by other people.  And, it is still incredibly difficult to find places to refill water bottles.  And, there are still piles of trash scattered around.  Something is going to have to give, and quickly. 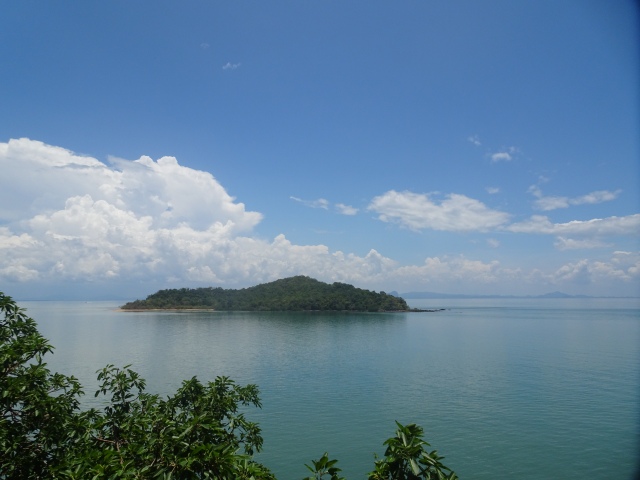 The view from Sunshine Hill on Koh Lanta.

If you are what you eat, there were a couple of weeks of our two months in Thailand where I was nothing but penang curry and green papaya salad.  We’ve only been back in the U.S. a couple of weeks and we are already missing and craving Thai food. 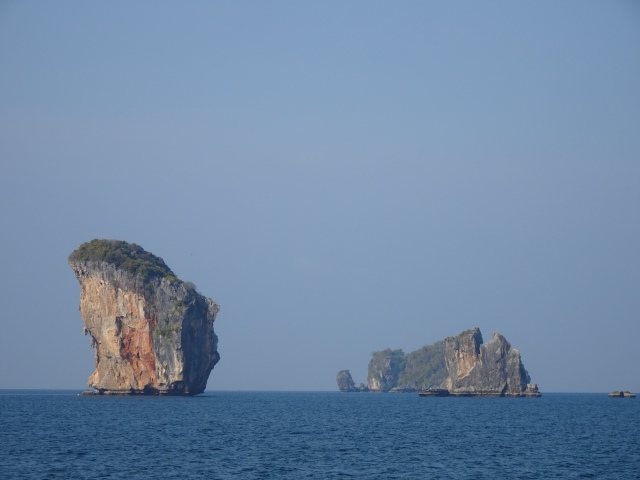 Another monkey on Koh Lanta.

Did you know Thai craft beer isn’t made in Thailand?  Nope, most of it is made in Cambodia.  Apparently, the big brewers have gotten laws enacted in Thailand that prevent small start ups from operating in Thailand.  Robert tells me that, in spite of this, Thai craft beer can be quite yummy, albeit expensive.

Robert says the urinals in Thai bathrooms are outrageously high.  I can neither confirm nor deny his statement.  Maybe I will have to check it out on our next trip to Thailand (because everyone knows we will be back).

Lisa has a degree in biology and another in law and has spent the last 20 years working as a patent litigator. She is a voracious reader of young adult dystopian fiction and watches far too much bad tv. She loves pretty much anything to do with zombies, and doesn’t think there is anything weird about setting an alarm at 6 am on a weekend to stumble to a pub to watch her beloved Chelsea boys. Robert has had many professions, including a chef, a salesman, an IT guy and most recently, a stay at home dog dad. He speaks Italian and hopes to learn Spanish on this trip. He loves nothing more than a day spent sailing, hopes to do more scuba diving, and rues the day he introduced Lisa to football (i.e., soccer).
View all posts by theschneiduks →
This entry was posted in Final Thoughts, Thailand and tagged ao nang, khao lak, koh lanta, nature photography, underwater photography. Bookmark the permalink.