Posted on February 26, 2019 by theschneiduks

While visiting Yogyakarta, we decided it would be nice to get out in the countryside for a day and visit a beach.  Enjoy nature and all that, right?  Well, we read about a beach called Timang Beach.  Right off of Timang Beach is a small island.  Apparently, locals fished for lobsters on the island and built a hand-powered gondola to carry them over the water.  The gondola is now open for tourists (as is a recently built suspension bridge).  Winner, winner, chicken dinner — we had our beach.  What we didn’t know is that Timang Beach is (1) super touristy, like on par with the Wisconsin Dells; (2) not even really a beach — you are on cliffs the entire time; and (3) a huge money pit.  Let me explain. 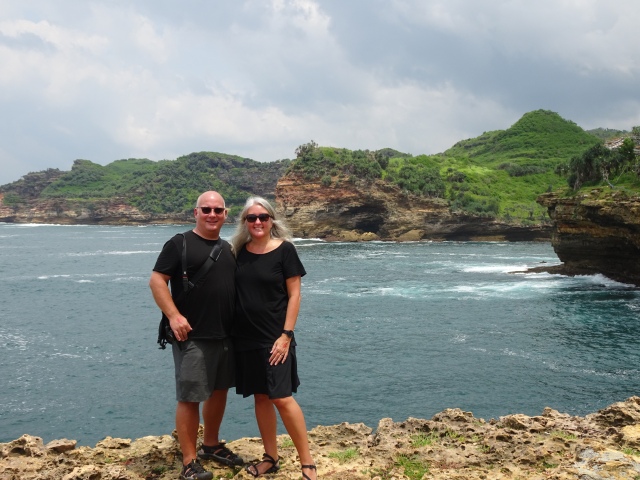 On the island — remarkable that the photographer got a photo that makes it seem like we are actually in nature and not in a spot of mass tourism.

The first thing you need to do is arrange transportation.  We booked a private car and driver.  At first, we thought it was insanely expensive — 600K IDR or about 43 USD — but then we realized it was less than a cab from our old home to O’Hare airport.  Given the cab ride only lasted about an hour, and we had the car for the entire day, the price didn’t sound so bad.  (Yes, I’m rationalizing a bit here, but as you will see it was the most reasonably priced part of our day …..).  You could probably rent a scooter too, although cell phone reception in the hills was pretty grim and the route was far from straightforward (and you run the risk of riding on back roads in a torrential downpour).  Plus, if you rent a scooter you have no chance of a driver like ours who played all the best hits from the 80’s hair bands — we heard Def Leppard, Bon Jovi, and even White Lion (remember them????). 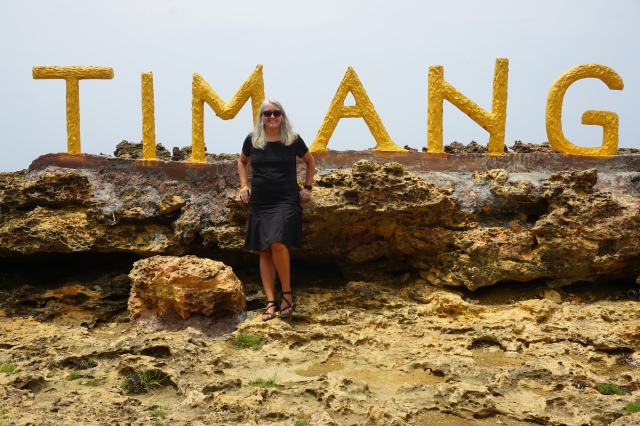 Lisa on the island.  A perfectly good place with a huge ass sign telling you where you are (as if you didn’t already know).

Anyway, after about 2 hours of winding through surprisingly busy country roads with rice fields and corn fields and cassava fields, we arrived at the furthest point our car could go.  In other words, we arrived at a point near where the locals have refused to allow the road to be paved in order to charge tourists an insane amount of money for a jeep ride.  (OK, fine, I’m speculating here, but I would take this bet….).  Yep, boys and girls, it was time to pony up 350K IDR (about 25 USD) so we could jump in a jeep for the 10 minute or so ride to the beach.  Interestingly, the drive started on a road that was suitable for cars, and ended on a road that was suitable for cars, and there was just a short stretch in the middle that was unsuitable for cars — yep, pretty sure that was intentional.  But, I digress. 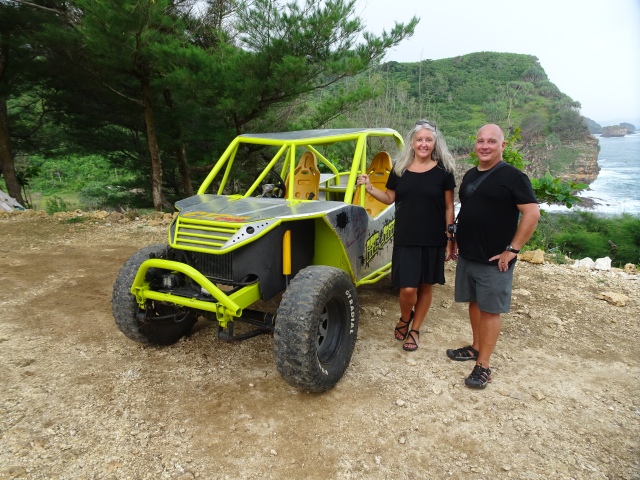 Sadly, this isn’t the type of jeep we took.  Nope, we weren’t even in a real jeep — we were in a Suzuki with a roof and everything.  This one was just parked there for photo opportunities.

After our smooth, bumpy, smooth jeep ride, it was time to part with still more of our money.  It was 100K IDR (about 7 USD) per person to cross to the nearby island on the suspension bridge or 200K IDR per person to cross on the “gondola.”  Can you guess which one we picked?  Yep, the no doubt horribly unsafe human powered gondola with no seat belt, no life jacket, and no chance of survival if anything failed.  Good thing the ride only lasted 30-40 seconds or so. 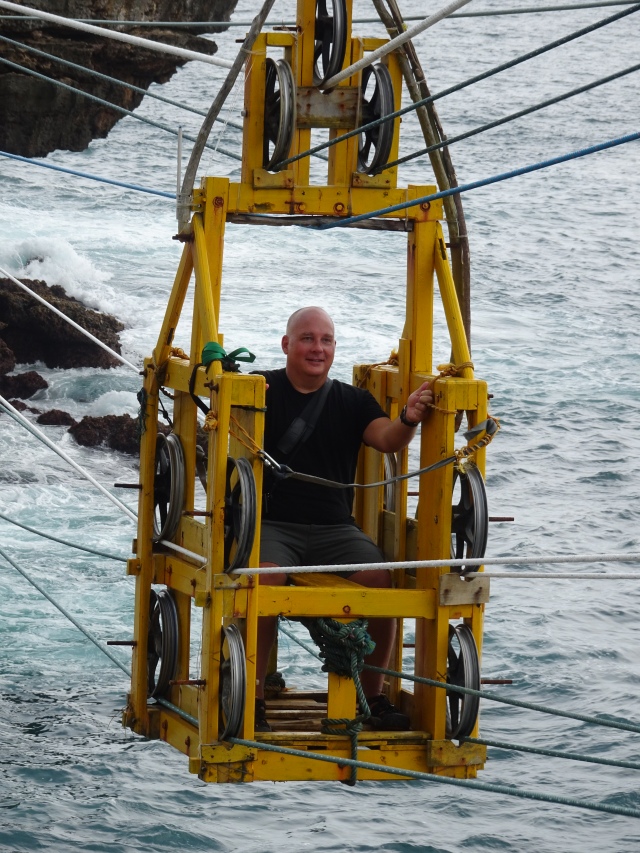 Robert on the gondola.  The guys running it were pretty adamant that we hang on to the rope straps.  Like that was going to help in an emergency…. 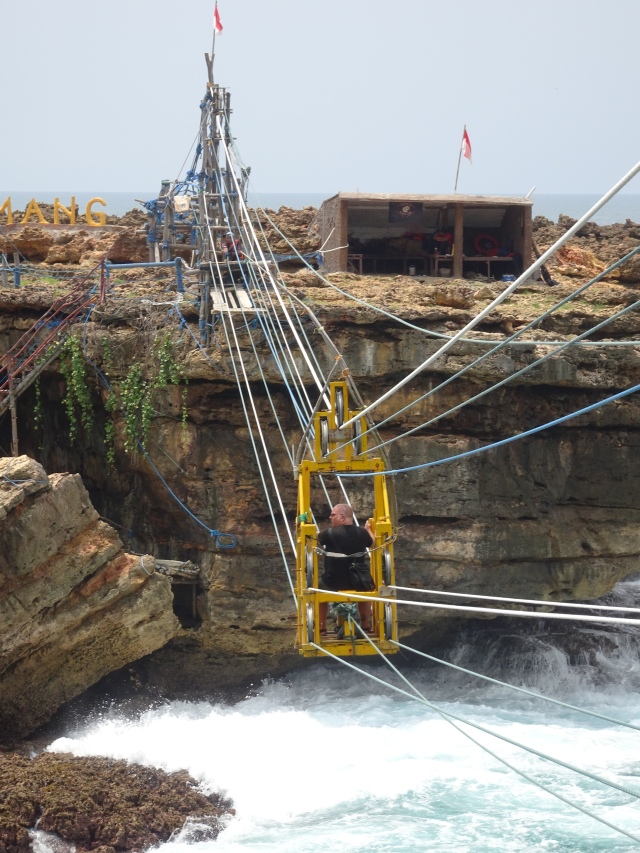 Apparently, on some days, the waves will hit the gondola riders.  Thankfully, we weren’t there on one of those days.

After exploring the island and having all kinds of photos taken for us by one of the workers, it was back across the gondola, back into the jeep, and off to the restaurant that serves only two meals — 1 kg of lobster with tempeh, rice, and veg for 650K IDR (about 46 USD) or all of the above plus fish and squid for 750K IDR (about 53 USD).  I don’t eat lobster or squid, so we got the smaller of the two meals, but Robert tells me the lobster was delicious — we got two lobsters, one of which was covered in garlic and the other was covered with a tomato/onion compote — and I can vouch for the tempeh (I’m still shocked that I like tempeh).  But, this was our most expensive meal in all of Yogyakarta and I didn’t even eat the main course, so we were more than a little annoyed (especially considering they served us enough food for at least 4-6 people — oh well, our driver was happy to take the leftover lobster). 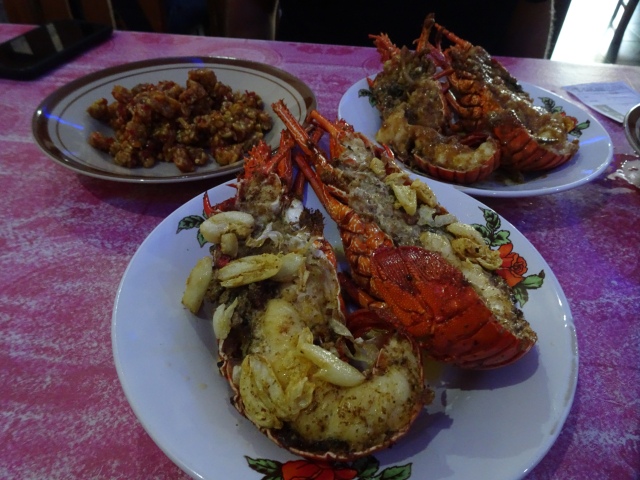 Lobster (look at all that garlic on the lobster in front) and tempeh.

All that said, and even after spending an insane amount of money in one day, we actually LOVED the day.  It was a ton of fun.  Cheesy and touristy and corny and annoying, but pretty cool all the same.  If you have plenty of time in Yogyakarta and plenty of cash, this just might be worth putting on your to do list if you like this sort of thing.  (Note we were there in low season and there was only one other group of tourists on the island with us — I’m guessing it is a madhouse in high season).

Lisa has a degree in biology and another in law and has spent the last 20 years working as a patent litigator. She is a voracious reader of young adult dystopian fiction and watches far too much bad tv. She loves pretty much anything to do with zombies, and doesn’t think there is anything weird about setting an alarm at 6 am on a weekend to stumble to a pub to watch her beloved Chelsea boys. Robert has had many professions, including a chef, a salesman, an IT guy and most recently, a stay at home dog dad. He speaks Italian and hopes to learn Spanish on this trip. He loves nothing more than a day spent sailing, hopes to do more scuba diving, and rues the day he introduced Lisa to football (i.e., soccer).
View all posts by theschneiduks →
This entry was posted in Indonesia and tagged off the beaten path, yogyakarta. Bookmark the permalink.