Posted on February 6, 2019 by theschneiduks

After our second three month visit, Robert and I left Vietnam last week feeling very, very conflicted.  Don’t get me wrong, we still adore Vietnam.  But it is changing so quickly.  It is getting harder and harder to feel like we have any opportunity at all to see the “real” Vietnam — instead tourists are shuttled off to tourist towns (Mui Ne, I’m talking about you) and tourist districts (Hue, I’m talking about you) and tourist restaurants.  So, if you have any desire to go, we say go now before it changes any further.

In spite of visiting Vietnam four previous times and eating a ton of Vietnamese food in Chicago, we were pleasantly surprised at how much new food we tried on this trip.  I absolutely loved the beef stew served everywhere in Hoi An.  (That might have something to do with the yummy baguette served with the stew).  Robert fell in love in Hanoi with Bun Thit Nuong’s cousin Bun Cha (grilled ground pork patties with noodles).  And, I have no idea how on earth we had previously missed the fried bread served with the pho in Hanoi.  All excellent dishes. 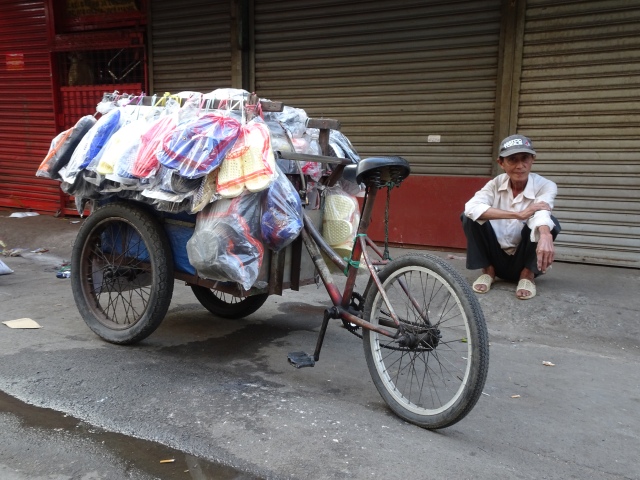 Vendor taking a break in Saigon.

I couldn’t believe how difficult it was to find body lotion that didn’t have a whitening agent in it.  We went to store after store in a nearly futile attempt to find it.  And, what we finally found was so heavily perfumed I left it behind when we flew to Bali.  I guess that explains how the Vietnamese women can have skin whiter than mine at the end of a Chicago winter….

On a break in Saigon.

We were both astounded at how frequently we were given incorrect change, and that it was almost always in our favor.  And, when we told shopkeepers and waitresses that they had given us too much change, they always looked at us like we were crazy.  It wasn’t until the end of our visit that we realized we might have been inadvertently shaming them rather than just doing the honest thing.  Oops! 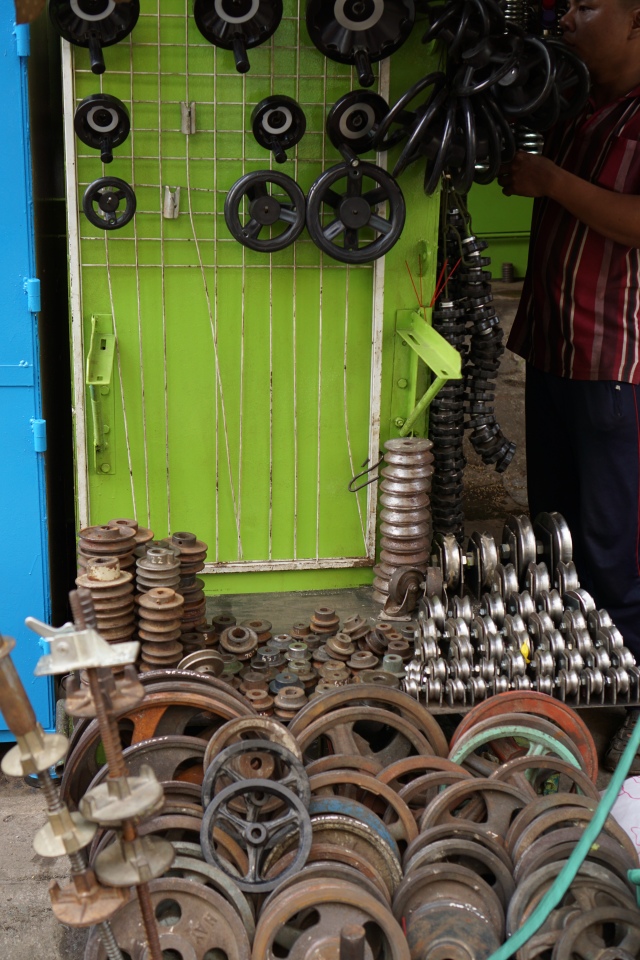 At the bolt market in Saigon.

The ATMs in Vietnam are awful.  Oftentimes, they only let you take out 1-2 million Vietnamese Dong.  Sounds like quite a bit of money, right?  Well, guess again.  That is roughly 42-85 USD.  And, most of the ATMs charge huge fees — on average they were probably 2% but some were even higher.  So, the first order of business in every new town was to find a high limit ATM with low fees.  (Hint:  Military Bank seems to fit the bill most places).

Flowers for Tet in Saigon.

It doesn’t matter how “nice” a hotel is, there is always something “off” in Vietnam.  For example, the Pullman hotel in Saigon has the bathtub in the middle of the room and only glass doors that don’t even go all the way to the ceiling to separate the toilet from the bedroom.  I certainly prefer a bit more privacy than that….  Leman Cap Resort in Vung Tau thoughtfully gave us reusable fabric bags as a parting gift — which they then put into a very heavy plastic bag.  It is always something….

A sleepy dog in Hoi An.

Wow, do the Vietnamese turn the volume up to 11.  Everything is so loud.  Karaoke bars blare music into the streets at all hours.  People scream when a normal speaking voice would suffice.  Radios blare out music on the sidewalk.  It does really get to be a bit much.

Lanterns in Hoi An.

The Vietnamese really love their football (soccer) team.  We were lucky enough to be there for two big tournaments, one of which Vietnam won.  After every winning game, the parties started.  In Hanoi, people set off glitter bombs in the streets and the party lasted all night.  In Hoi An, people called in sick for work the next day as they nursed their hangovers.  And, in Vung Tau, there was an impromptu scooter parade with guys carrying flares in their bare hands.  It was crazy.

Bitter melon at the market in Hoi An.

Children are treated so differently here.  They are encouraged to pose for photos for complete strangers.  They are encouraged to practice English with complete strangers.  So, certain things we as Americans would consider completely unsafe or inappropriate are no problem here.  Yet, they aren’t required to wear helmets on scooters until age six.  Go figure.

Market vendor in Hoi An.

There is sugar everywhere.  Order a black coffee, expect it to be full of sugar.  Order a lemonade, expect an inch of granulated sugar at the bottom of the glass.  Order popcorn at the movie theater, expect it to be candied.  Vietnam apparently has the highest and fastest growing rate of diabetes in SE Asia.  Coincidence?

Mural on the streets of Hanoi.

Robert at the beach in Vung Tau.

So few tourists even try to speak Vietnamese.  We learned a few words and it was amazing how happy it made the Vietnamese people.  Robert learned how to ask for his coffee in Vietnamese and, wow, did it make people smile.  We both learned how to ask for the check in Vietnamese — again, it made everyone smile.   You cannot believe the amount of attention you get when you yell “em oi, tinh tien,” which more or less means “hey, the bill” across a crowded restaurant — heads literally whip around (and, yes, we had two different Vietnamese people in two different cities teach us how to say this properly plus we heard plenty of locals say it so we know we were doing it correctly).  People’s eyes lit up when we wished them Happy New Year in Vietnamese.  Unfortunately, neither one of us think we could ever truly learn the language.  (As evidenced by how frequently I said beef (bo) when I meant to say three (ba)….) 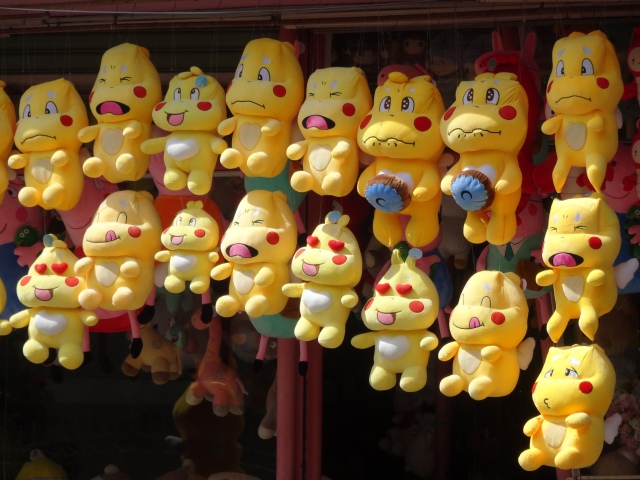 There is a serious lack of birds in Vietnam.  You would think in a country so green and so full of rice that there would be birds everywhere.  But, there really weren’t.  And, the birds we did see were mainly of the boring pigeon and chickadee varieties.  I wonder if it is a long term side effect of Agent Orange or something else? 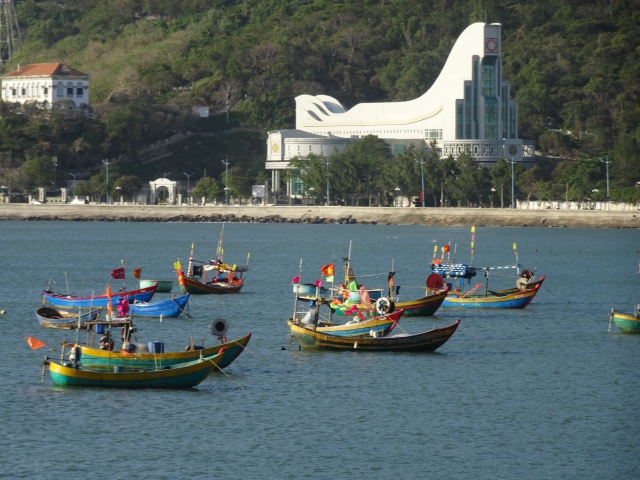 In Chicago, we always looked for the tamale guy to show up at night.  In Vietnam, we saw spring roll ladies.  I really kind of miss the tamale guy…

There are security guys everywhere.  But, as best we can tell, none of them are actually protecting stores or shops.  They are all protecting scooters.

The most famous bridge in Hoi An.

Give beer street in Hanoi a pass.  It used to be a great place to spend an evening.  No so anymore.  Now, the touts will actually grab you in an attempt to pull you into their establishment.  And, they will refuse to sell you anything other than their sponsor beer.  Even if you don’t drink beer.  And, even if the menu lists plenty of other beverages. 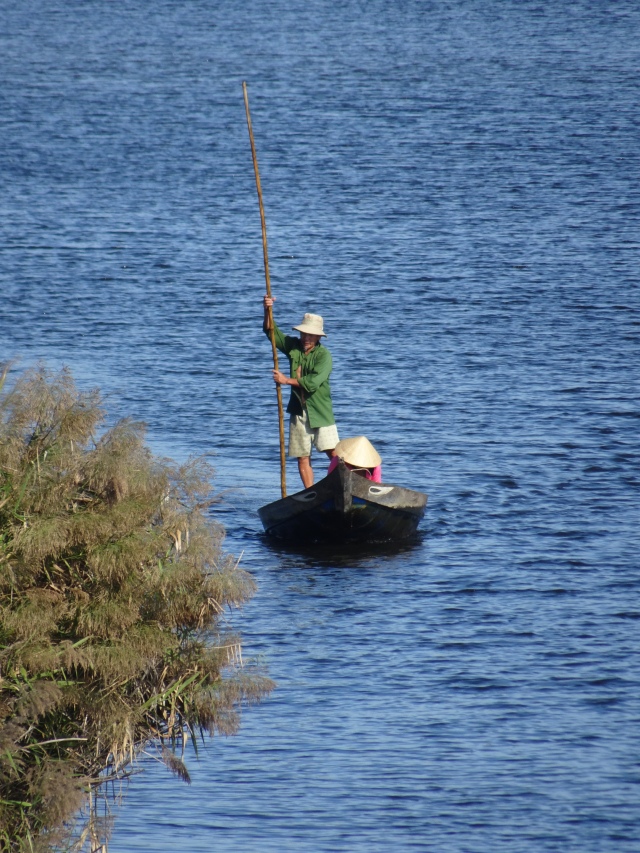 Fishing outside of Hoi An. 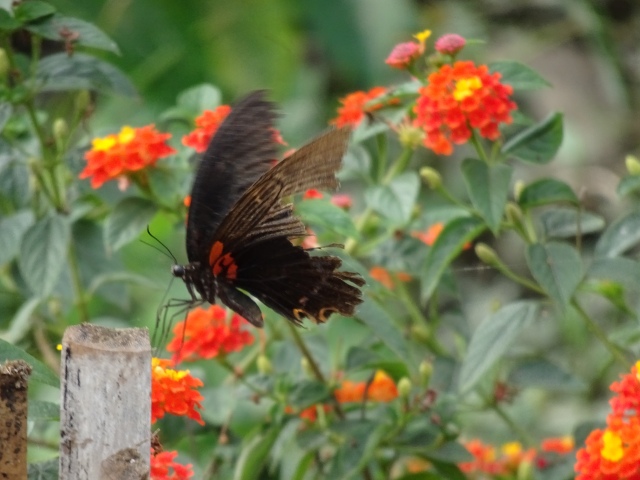 You know your standards have completely changed when you walk into a bathroom at a highway rest stop, see there is no seat on the toilet but that everything is dry and there is toilet paper, and think “hmm, this is a really nice bathroom…..”

Hats for sale in Hanoi.

Robert and I have always disagreed as to whether Northern Vietnam or Southern Vietnam is the best.  As in the past, I continue to think Hanoi is the best part of Vietnam.  It was the rare place where it was still really easy to eat at local restaurants that didn’t cater to tourists, especially if you walked just a few minutes out of the old town area, and the food was amazingly good.  Robert grudgingly admitted to me Hanoi was his favorite city this time, but he also still really likes Saigon and, I have to admit, once you get out of District 1 there is quite a bit to like about Saigon.

Robert on train street in Hanoi.

We will be back to Vietnam someday.  But next time, I think we will give places like Mui Ne a miss and focus more on the small towns in the North.

Lisa has a degree in biology and another in law and has spent the last 20 years working as a patent litigator. She is a voracious reader of young adult dystopian fiction and watches far too much bad tv. She loves pretty much anything to do with zombies, and doesn’t think there is anything weird about setting an alarm at 6 am on a weekend to stumble to a pub to watch her beloved Chelsea boys. Robert has had many professions, including a chef, a salesman, an IT guy and most recently, a stay at home dog dad. He speaks Italian and hopes to learn Spanish on this trip. He loves nothing more than a day spent sailing, hopes to do more scuba diving, and rues the day he introduced Lisa to football (i.e., soccer).
View all posts by theschneiduks →
This entry was posted in Final Thoughts, Vietnam and tagged street photography. Bookmark the permalink.