Banh Mi Sandwiches in Hoi An

Posted on December 26, 2018 by theschneiduks

(Other than this introductory paragraph, this post has been ghost written by Lisa on behalf of Robert.  First, because Robert by all accounts has never been much of a writer, even though he is a great talker.  But, more importantly, because Lisa doesn’t eat banh mi sandwiches and really doesn’t know anything about banh mi sandwiches except for the fact that they have too many “icky” things on them.  Well, except for the peanut butter banh mi (according to our guest expert, Robert, not really a banh mi sandwich) she found in Hanoi.  OK, now that that is out, read this in Robert’s voice for a change).

When one thinks of Hoi An, the first thing that comes to mind is tailoring.  And, then perhaps custom made shoes.  Maybe cao lau.  And, definitely the old buildings and lanterns.  This post isn’t about any of those things.  This post is about the absolute best part of Hoi An — the banh mi sandwiches.

What is a banh mi you might ask?  Well, the first thing to know is that, technically, “banh mi” (sometimes spelled “banh my”) is just bread.  But, when most people hear “banh mi,” they think of it as the number one sandwich in the entire world combining both French and Vietnamese influences.  The best ones start with a crunchy baguette (you know, the kind that will rip the roof of your mouth apart if you aren’t careful).  Then, you add pate, grilled pork, ground pork, shredded pickled papaya and carrot, lettuce, cucumber, some meat juices (the more the better!), hot sauce, and maybe an egg or some cheese.  You can sometimes get vegetarian versions, but why would you?

Where can you find a banh mi in Hoi An?  Well, pretty much everywhere.  But, here are the best ones.  Every single one of these sandwiches was better that any sandwich I ate in Hanoi and any banh mi sandwich I have ever eaten in Chicago.

Tam Hoa Banh Mi.  I went here on our food tour of Hoi An.  I’m pretty sure this is the best banh mi I’ve ever had in my entire life.  Every single component — from the bread, to the grilled pork, to the au jus, was top notch.  Tam Hoa is just a little cart located at the corner of Tran Cao Van and Tai Phien.  It is only there until 10:30 am, so get there early.  (No idea what time it opens, but the earliest I was there was around 6:45 or so — I’m still mad at Lisa for making me get up that early for the photo tour).

At Tam Hoa.  Doesn’t look like much, does it?  But looks are deceiving.

Phi Banh Mi.  This stand is just down the street from Tam Hoa.  Yes, I did go to both places within the span of 15 minutes one day.  No, I don’t feel one bit guilty about it.  The sandwich here had all the usual ingredients, but this place also adds mint to the sandwich.  It was a great addition.  Phi Banh Mi can be found at 88 Thái Phiên.  They have seating if you want to eat in. 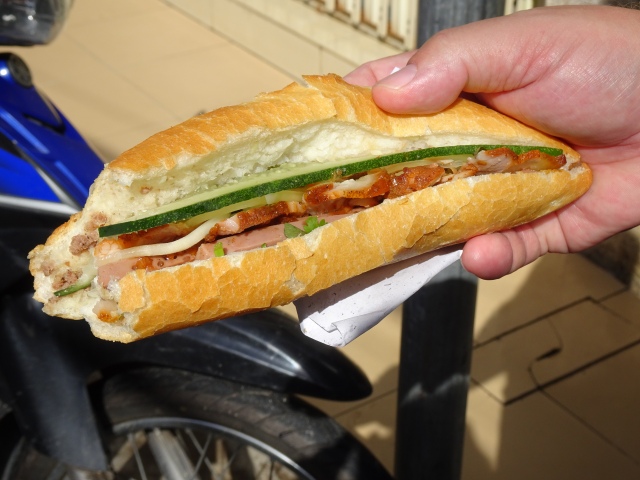 Phi Banh Mi.  Look at how neatly this sandwich was put together.

Mrs. Hoa.  This stand sets up most late afternoons/evenings and seems to do a brisk business with locals who pull up on their motorbikes and get a sandwich to go.   This banh mi was juicy and saucy and porky and eggie goodness.  A fantastic late-night snack.  Mrs. Hoa can be found right by the bridge over to Cam Nam Island and, if you are staying on Cam Nam Island like we were, I guarantee you will have devoured the sandwich before you finish crossing the bridge.

Banh Mi from Mrs. Hoa.  Can you see all that greasy, juicy deliciousness?

Madame Khanh — The Banh Mi Queen.  Affectionately known as “Queen,” this place is always on the “best of” lists.  Unfortunately, on my first visit, the bread was stale and the pate and ground pork were not evenly distributed across the sandwich.  That said, it was still really good.  And, the on the second visit, the entire sandwich was much better, although still not good enough to make it rise up any further on my list.  Queen can be found at 115 Trần Cao Vân.  They have seating too if you want to eat in.

Queen Banh Mi.  Check out how messy this one is.

Banh My Xuan Cam Nam.  This is a little stand right across the Cam Nam bridge (on the island side).  She sets up most days around mid-afternoon.  She was grilling her bread to get the moisture out and her sandwich was layered with different juices.  Yum! 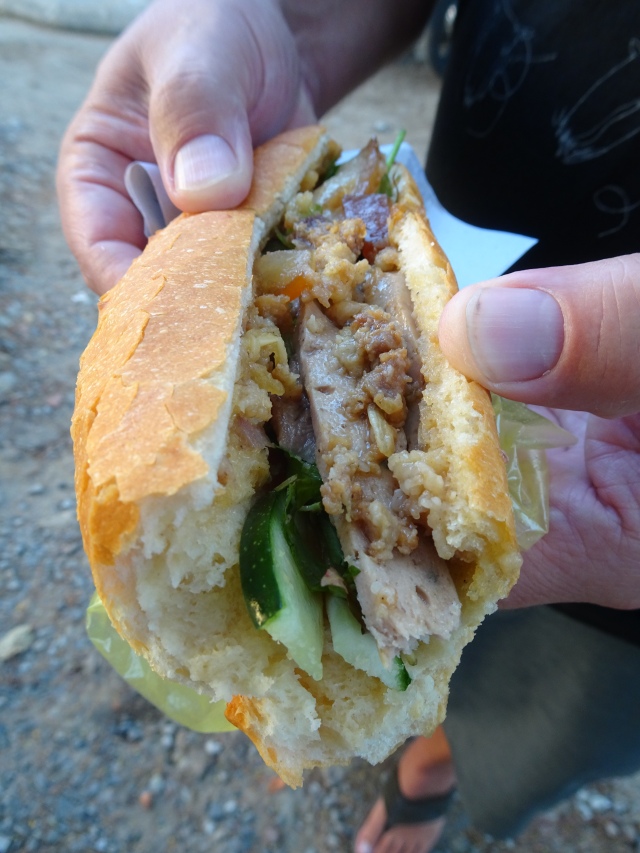 Banh Mi Phoung.  This is the place Anthony Bourdain recommended, and his photo is even on the paper the sandwich is wrapped in.  The shop is completely disorganized with no clear method to the madness, and it is pretty much always crowded, and the hassle of trying to figure out how to order here diminishes the tastiness of the sandwich.  And, there was a small bone in my sandwich.  But, again, it is still one of the best I’ve ever had.  Banh Mi Phoung can be found at 2b Phan Chu Trinh.  Even better, just down the street is a place called Tap House that will let you eat your banh mi there while you drink a Vietnamese craft beer.  And, for those of you with a picky wife like me who doesn’t understand the beauty of a craft beer, Tap House has wine too.  (Note from Lisa:  Looks like the Anthony Bourdain curse struck again — a place that was once probably the best but has been a victim of its own success). 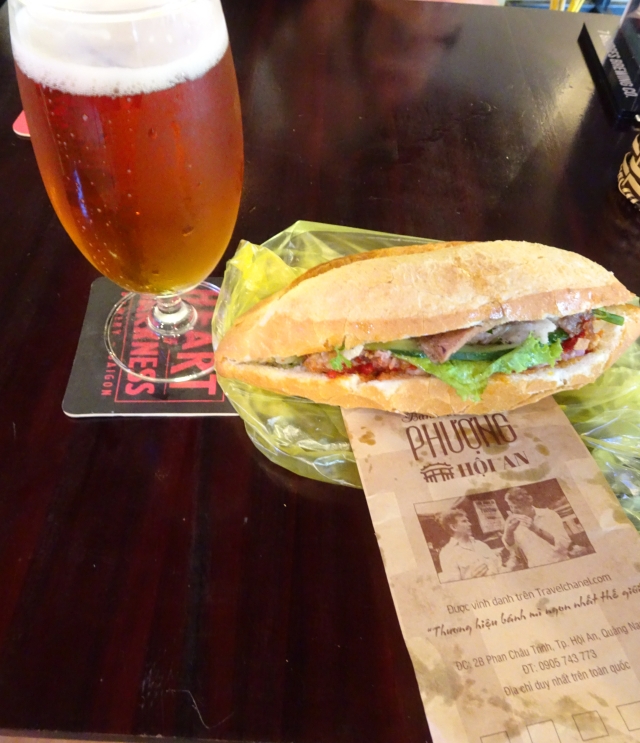 A sandwich endorsed by Bourdain and a beer.  What is not to love?

Bahn Mi Pho Co.  I had high hopes for this little stand, as day after day we saw taxi drivers stopping in and grabbing a sandwich.  Maybe they get a better sandwich than I got, or maybe I was just annoyed because the lady tried to shortchange me (there is no way this was worth double all the other sandwiches I had….), but it certainly wasn’t my favorite.  Still, it was quite good (even in spite of the strange yellow color) so it seemed worth putting on the list.  This stand is on a corner around 2 Le Loi street.

Ahh….Hoi An, I’m going to remember your sandwiches for a very long time.

Lisa has a degree in biology and another in law and has spent the last 20 years working as a patent litigator. She is a voracious reader of young adult dystopian fiction and watches far too much bad tv. She loves pretty much anything to do with zombies, and doesn’t think there is anything weird about setting an alarm at 6 am on a weekend to stumble to a pub to watch her beloved Chelsea boys. Robert has had many professions, including a chef, a salesman, an IT guy and most recently, a stay at home dog dad. He speaks Italian and hopes to learn Spanish on this trip. He loves nothing more than a day spent sailing, hopes to do more scuba diving, and rues the day he introduced Lisa to football (i.e., soccer).
View all posts by theschneiduks →
This entry was posted in Vietnam and tagged anthony bourdain, hoi an, street food. Bookmark the permalink.

2 Responses to Banh Mi Sandwiches in Hoi An