Posted on November 22, 2018 by theschneiduks

We have spent the last few days in an area of Vietnam known as Mai Chau, a rural area about a three hour or so drive from Hanoi.  It was a perfect place to visit after the hustle and bustle of Hanoi.

The region is in a valley, surrounded by hills.  It is beautiful even now when the rice is all harvested and the fields are brown, and I can only imagine how stunning it must be in green season. 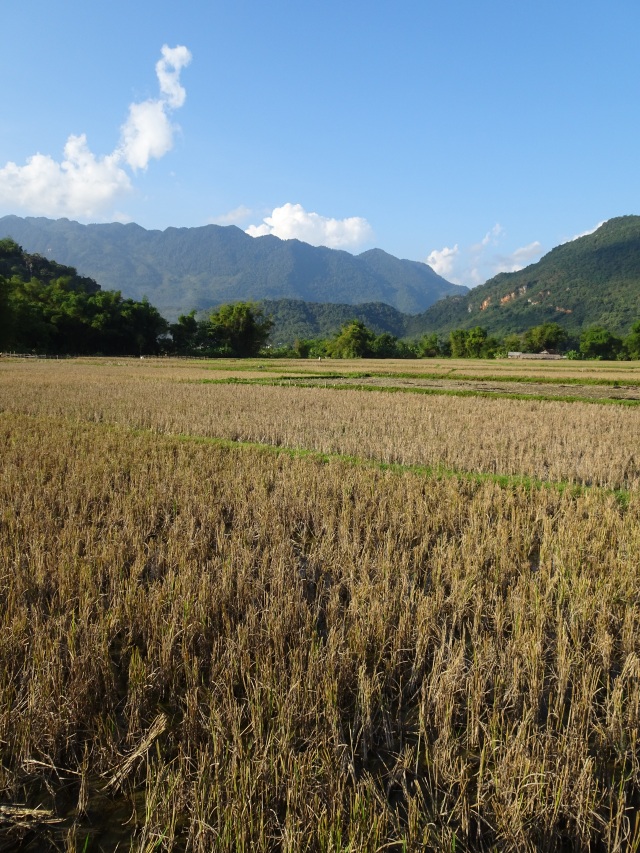 The view on one of our daily walks.

The residents of Mai Chau are largely from the white and black Thai ethnic groups.  They build their houses on stilts.  There are shops and restaurants underneath many of the houses.  The women are apparently expert weavers.  We saw lots of women harvesting silk worms and sitting at looms and there were all kinds of colorful scarfs and the like for sale.  And not a single person harassed us or pressured us to buy anything, which was lovely.

House on stilts in Mai Chau.

Mai Chau is sleepy without much to do except walk and bike.  We spent hours each day walking through the various villages and exploring (and a little bit of time on some rickety old bikes that made my butt hurt).  There were plenty of farmers working in the fields.

Farmer working in the fields.

There were dogs everywhere.  Seriously, if you have a dog phobia, don’t visit Mai Chau as there are hundreds of dogs.  Many of them are out in the rice fields hunting (sure wish we knew what they were hunting).  Many of them are hanging out on the roads.  All of the dogs that got anywhere near us were friendly.  And, if you are extra lucky, a huge dog will come up to you as you are sitting in a cafe and demand to be given some attention. 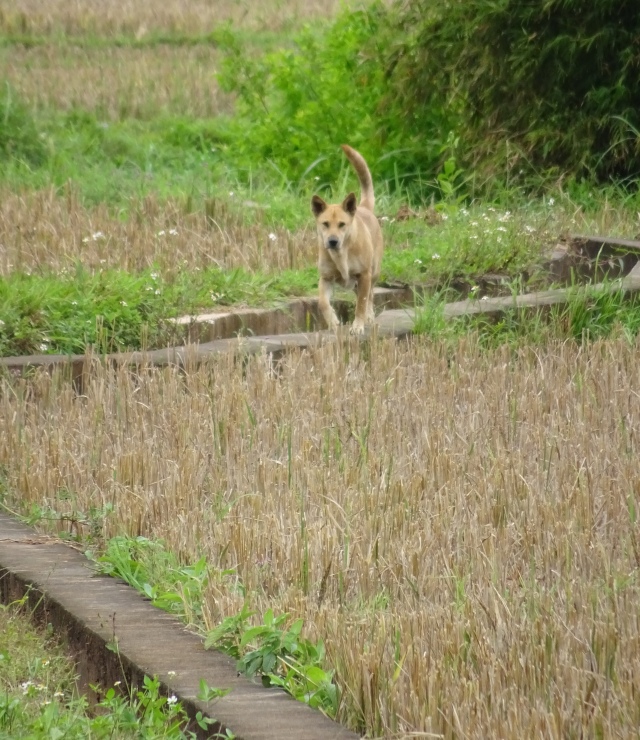 A dog in the rice fields.

There were various farm animals.  This baby pig was adorable.

Cows roamed freely in the villages.  (You always had to watch where you stepped….).  The water buffalo, however, appeared to be penned in fences or at least tied up.

A cow walking through town.

There were ducks and geese everywhere.  Every morning we woke up to the sounds of ducks and geese in the rice field outside our room.  One day we happened to walk by as an entire flock of ducks left the puddle they were in, waddled up to the road, and waddled down the street.  Maybe they were going home for the night?

The hens and roosters were extraordinarily colorful. 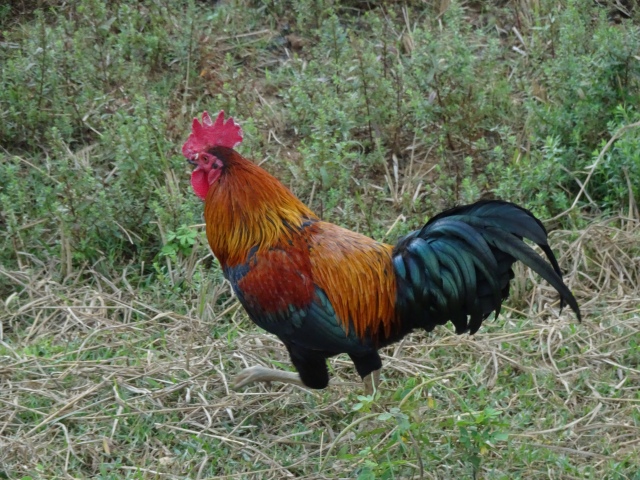 Check out the amazing colors on this guy.

There were even mountain goats.  They were very skittish.  We could hear more rustling in the bushes than we could actually see.

The insect life in Mai Chau is pretty darn amazing too.  Check out this guy.  He showed up on our patio one day.  He was very curious and started walking towards me as I was taking photos.  The next thing I knew, he jumped right on my camera.  Pretty cool!  Except then he jumped right on me, at which point I might have just shrieked a teeny, tiny bit.

The butterflies were amazing.  These guys were huge.

And check out this very strange caterpillar.

We very much enjoyed our time in Mai Chau.  I’m guessing it has a completely different feel during green season and on weekends (apparently, tons of school kids come on the weekends from Hanoi).  But it was a wonderful little off-season, mid-week, get-away.  (I know, I know, we are retired and shouldn’t need get-aways…..).

Lisa has a degree in biology and another in law and has spent the last 20 years working as a patent litigator. She is a voracious reader of young adult dystopian fiction and watches far too much bad tv. She loves pretty much anything to do with zombies, and doesn’t think there is anything weird about setting an alarm at 6 am on a weekend to stumble to a pub to watch her beloved Chelsea boys. Robert has had many professions, including a chef, a salesman, an IT guy and most recently, a stay at home dog dad. He speaks Italian and hopes to learn Spanish on this trip. He loves nothing more than a day spent sailing, hopes to do more scuba diving, and rues the day he introduced Lisa to football (i.e., soccer).
View all posts by theschneiduks →
This entry was posted in Vietnam and tagged nature photography, off the beaten path. Bookmark the permalink.