Luang Prabang — the good, the bad, and the ugly.

Posted on November 7, 2018 by theschneiduks

This is about the time I should be writing a blog called “final thoughts on Laos.”  But, since we only visited one town in Laos, that didn’t seem quite right.  So, instead, you get a summary of what we liked and didn’t like about Luang Prabang.  Newsflash, we were overall disappointed with Luang Prabang. 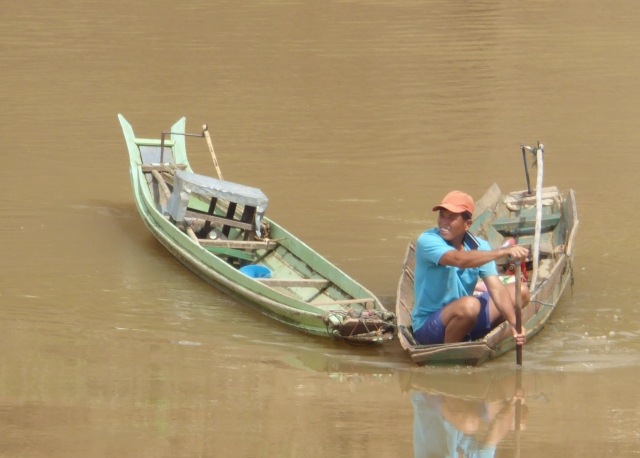 Boating on the river.

We really should have fallen in love with Luang Prabang…..

The town itself is beautiful.  A nice mix of Buddhist temples and French colonial architecture.  And, it really wasn’t overrun with tourists while we were there (we were there during shoulder season).  It was a completely chill and laid back place. 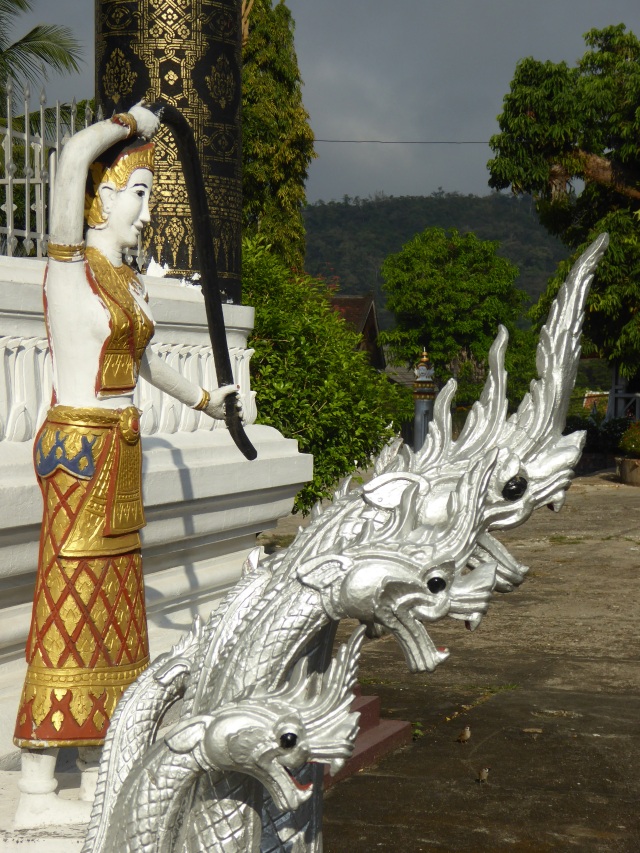 One of the many temples in Luang Prabang.

The town is bordered by the Mekong River on one side and the Nam Khan River on the other side.  The scenery along the rivers is stunning.  You can always find something interesting, whether that is men fishing, or boat races, or a random boat floating just off the shore. 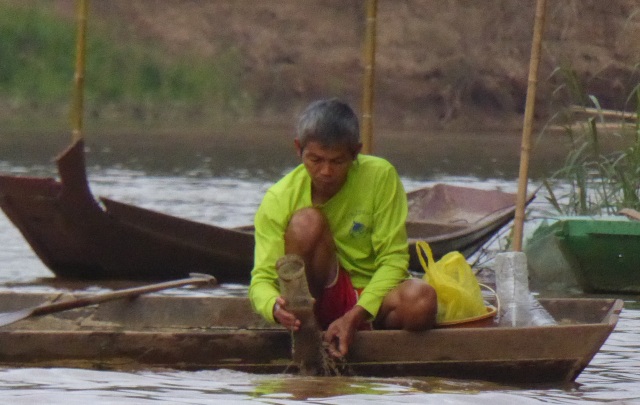 Fishing in the Mekong River.

The Festival of Light was really cool. 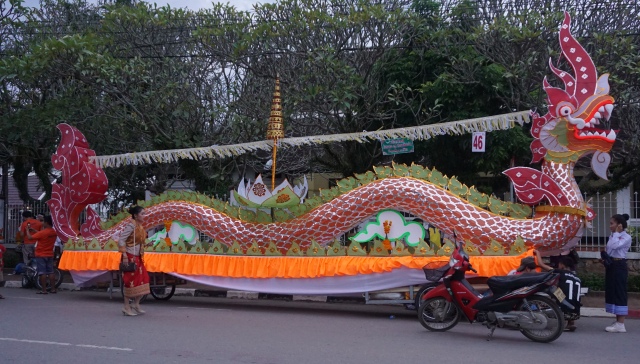 The cafe culture is outstanding.  There are American style cafes (oddly enough, owned by Canadians) and French style cafes and plenty of other cafes not so easily categorized.  There are plenty of croissants and pain au chocolat and baguettes to be found.  The coffee is good (or so Robert tells me), and there are Italian sodas all over town. 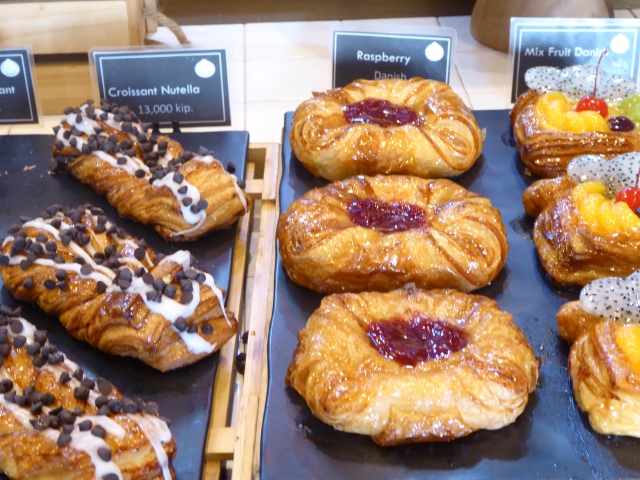 The French history means that reasonably priced and at least drinkable quality wine can be found just about everywhere.  And, Robert tells me the Beer Lao was actually pretty darn good.

There are monks everywhere.  I thought there were a lot of monks in Chiang Mai, but there are even more in Luang Prabang. 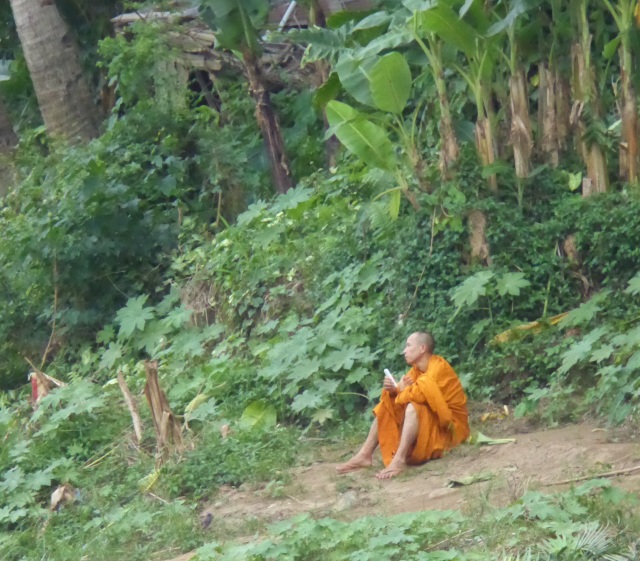 A monk sitting on the banks of the Mekong River.

The businesses seem far more ecologically friendly than in other countries.  Many of the cafes have signs up asking “Do you really need a straw?”  There is free drinking water all over town.  We have been very disappointed with how few bottle refill stations we have seen in places like Thailand.  Not so here.  Many of the cafes have free refill stations.  And, many serve free drinking water (even if some tourists frustratingly refuse to drink it because it isn’t bottled so they are afraid it isn’t safe — as if any tourist restaurant would intentionally serve unsafe drinking water). 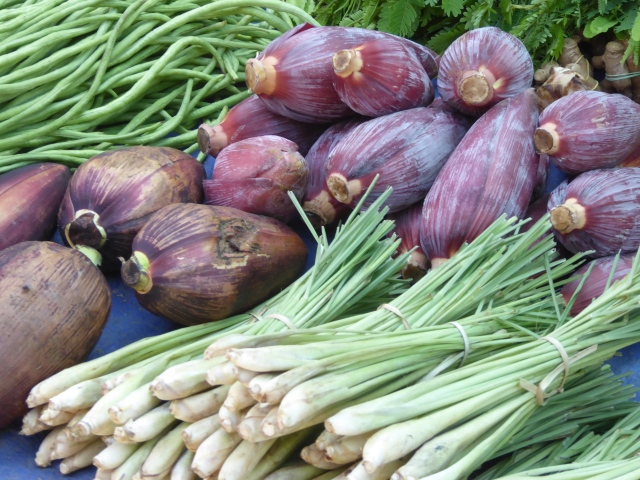 Produce for sale at the morning market.

The morning market was quite interesting.  This was one of the few places that seemed to cater to both locals and tourists.  We bought vegetables here when we cooked.  We passed on things like the red squirrel and the larvae that was for sale. 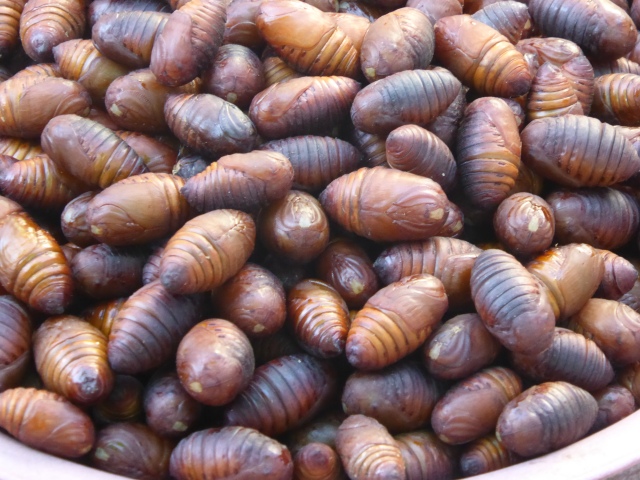 Some kind of larvae for sale at the morning market.

The coconut pancakes at the night market are some of the best things we have ever eaten (as long as you get them hot).  They are made from coconut cream, rice flour, and sugar.  They are grilled in a special iron plate and then served up in a folded banana leaf with toothpicks to eat them.  They are so good, even Robert liked them, and he doesn’t generally like dessert.  And the jerky made from sun-dried strips of buffalo meat is pretty darn good too.  As is the dried and fried river weed (basically, like a seaweed with sesame seeds and, if you are lucky, garlic) 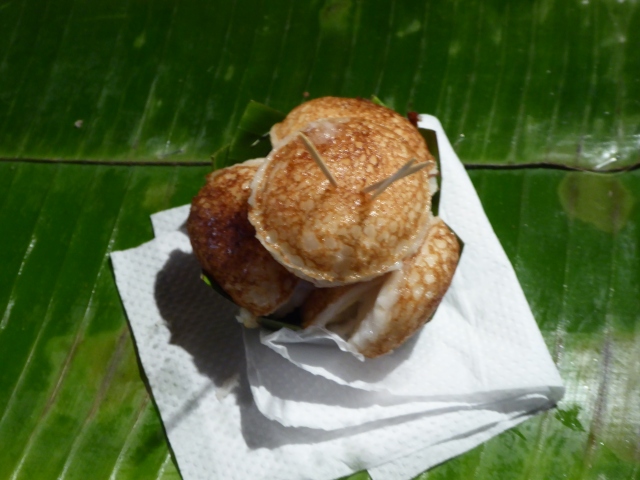 Coconut pancakes from the night market.

But, if truth be told, we didn’t fall in love with Luang Prabang….we didn’t hate it, but it was without a doubt our least favorite place this year (outside of Kuala Lumpur).

It feels a bit “fake” and sanitized and Disney-like.  There is very little mixing between the locals and the tourists.  It seemed to us that most of the places making money are foreign-owned (like Joma coffee that had a big sign up proudly declaring it was owned by Canadians).  It seemed to us that the locals who provide boat service and tuk-tuk service and sell food at the night market were feeling a little bit desperate.

The locals don’t seem all that friendly.  We were staying in a small village on the edge of town and even though we often made a point of saying hello (in Lao) to our neighbors, they rarely responded with a friendly hello back (and certainly never instigated a greeting).  I’ve never been to Door County, but Robert summed it up by saying it kind of felt like we were FIBS in Door County (if you are not from Wisconsin or Illinois, Urban Dictionary can define FIB for you — but ignore the bit about FIBS driving like grandmas, as that is all because the Wisconsin cops are out to get us FIBS). 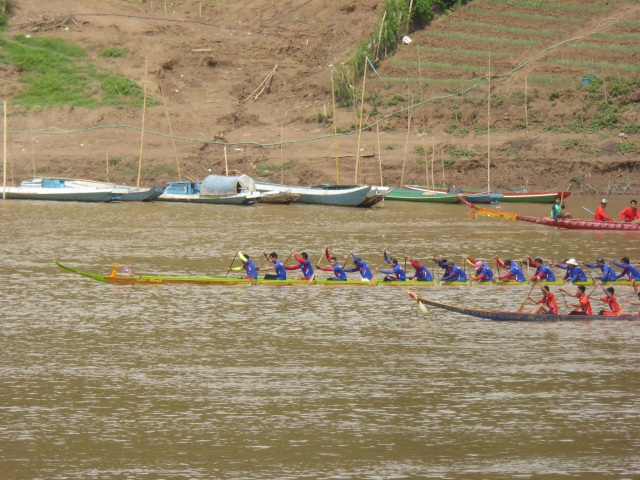 Boat races on the Mekong River.

The night market mostly sold mass produced junk that was the same stuff we have seen all over Asia.  I know that is true at most night markets around the world, but I remember being here when some of the women were selling their own handicrafts (and sewing between customers).  Seeing the change is sad. 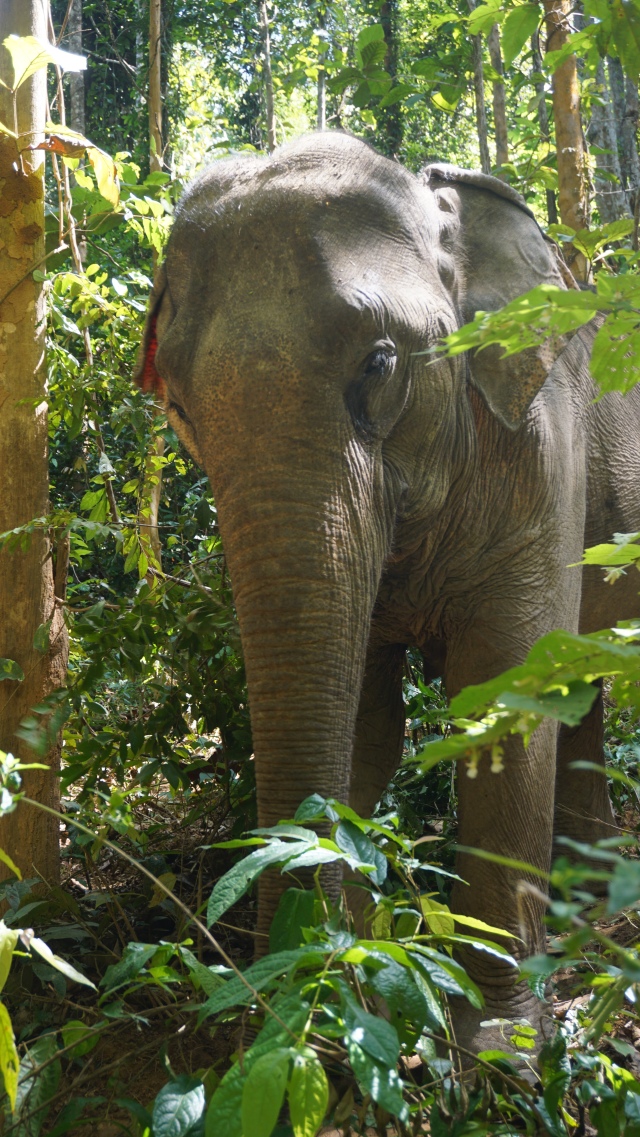 Our visit with an elephant.

Our excursions were both busts.  We’ve already written about our visit to the elephants.  I get more and more mad the more I think about how much we paid and how little we got in return.  We also booked a sunset cruise.  The cruise left 15 minutes late because the captain couldn’t get the boat started.  Then, when we were out on the water, the engine stalled twice.  We spent most of the “cruise” drifting down the river with the captain in back trying to fix the engine and nobody even trying to steer the boat. 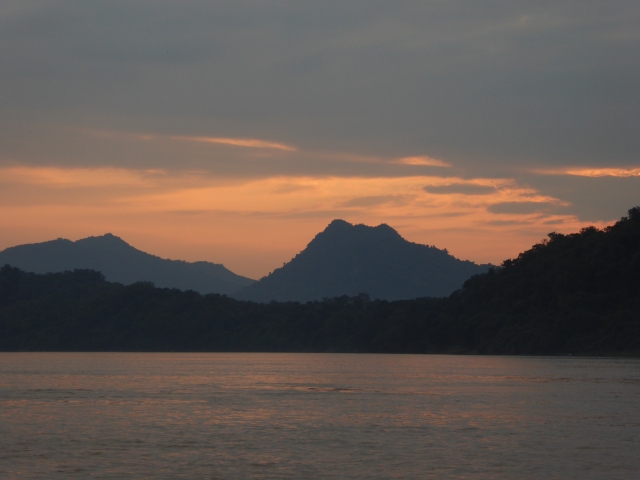 Sunset on the Mekong.

The market that caters to locals (Phosi Market) was grim, very grim.  Our apartment was just a five minute walk from Phosi Market and we anticipated that we would be doing a fair amount of shopping at the market so we could cook.  One trip to the market rid us of that idea.  We’ve been to markets all over Asia and this was the most depressing market we have seen.  Very dirty, floors covered with blood (I nearly fell more than once), and not much in the way of appetizing food on offer.  That said, the food was cheap.  We only paid 45,000 Kip (about $5) for a chicken, a dozen eggs, a huge carrot, and several cloves of garlic — and we are pretty sure the chicken lady completely ripped us off.  (Compare that though to the 100,000 Kip we paid for coffee, soda water, and two pastries, and you get a good idea of why the locals can’t afford to visit the cafes….). 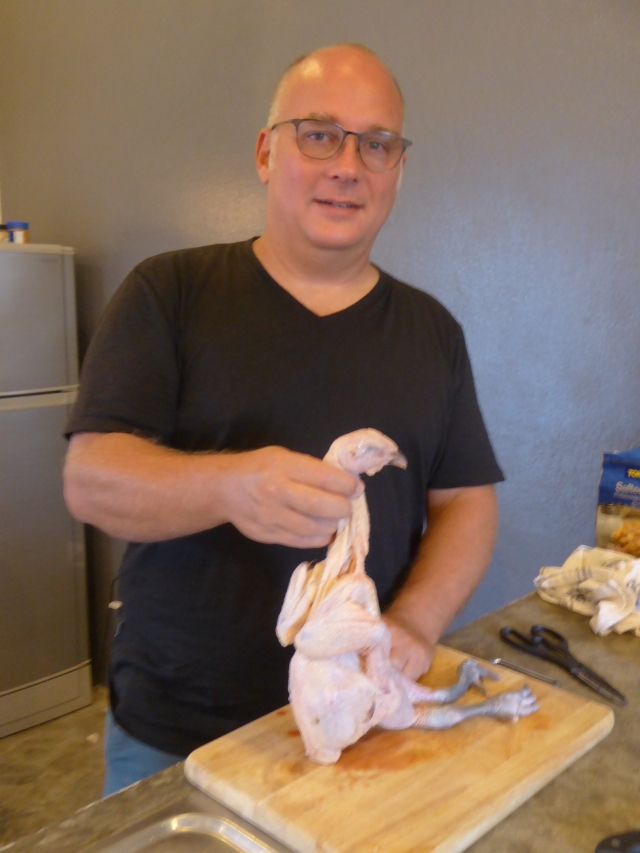 Is this about the saddest chicken you have ever seen?

The food overall just isn’t that good.  We had a few good meals, and some good snacks, but the vast majority of the food was just ok.  Everything seems a bit bland and flavorless.  And, the iodized salt they use here ruins the taste of things.  Seriously, there is so much iodine in the salt that sometimes the overwhelming flavor of a dish was iodine.  Gross!

Although there are Buddhist temples scattered all around town, they just aren’t that impressive compared to those in the rest of Asia. 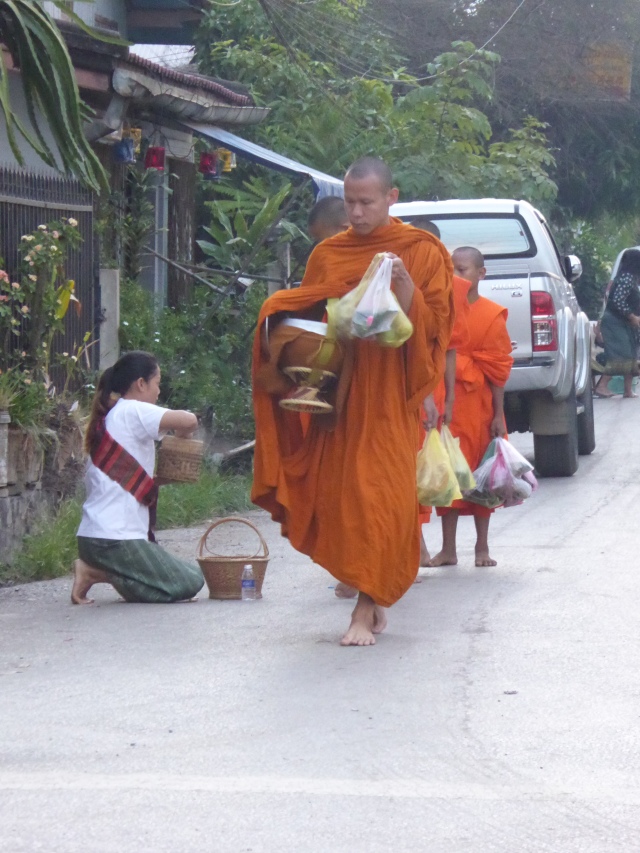 Alms giving on the street outside our apartment.  We didn’t go to the main area for alms giving, as the stories of how badly some tourists behave are appalling.

You can’t throw toilet paper in the toilets.  While that is true in many parts of Asia, our hotels usually have decent enough plumbing that they can handle tp.  No such luck in Luang Prabang.  The upside is that, after spending about a year or so of my life in SE Asia, I finally learned how to use the bum gun!  (No, there isn’t going to be a picture of this one.  And, no, there isn’t going to be a tutorial — look it up on Google, just like I did.)

Bottom line, we enjoyed our stay, but we won’t be rushing back anytime soon.

Lisa has a degree in biology and another in law and has spent the last 20 years working as a patent litigator. She is a voracious reader of young adult dystopian fiction and watches far too much bad tv. She loves pretty much anything to do with zombies, and doesn’t think there is anything weird about setting an alarm at 6 am on a weekend to stumble to a pub to watch her beloved Chelsea boys. Robert has had many professions, including a chef, a salesman, an IT guy and most recently, a stay at home dog dad. He speaks Italian and hopes to learn Spanish on this trip. He loves nothing more than a day spent sailing, hopes to do more scuba diving, and rues the day he introduced Lisa to football (i.e., soccer).
View all posts by theschneiduks →
This entry was posted in Final Thoughts, Laos and tagged luang prabang. Bookmark the permalink.