Finding animal experiences that are ethical is often difficult.  What was considered ethical in 2010 isn’t always considered ethical in 2018.  And, many places call themselves a “sanctuary” or the like, in a bid to entice tourists, but the reality is often different.  While in Luang Prabang, we heard about Mandalao Elephant Conservation.  The reviews were fantastic and the general consensus was that it is about as ethical as you get.  So, we booked the tour referred to as the Therapeutic Trek.

One of the elephants at Mandalao.

We left with very mixed feelings.  Mandalao does appear to be quite ethical.  We saw no mistreatment of the elephants or any sign of distress on the part of the elephants.  In fact, the elephants were quite friendly and seemed to enjoy interacting with people.  We were told that the elephants are never chained (not even at night) and training is done using positive reinforcement (sounds like bribes of yummy food).  And, the one baby elephant has been allowed to remain with his mother, which most places don’t allow.

Taking a break with one of the elephants at Mandalao.

The guides and mahouts and everyone else we interacted with were friendly and knowledgeable.  We were told Mandalao works closely with the local community to ensure the local community is benefiting from the elephants too.  And, they say they are working towards introducing elephants back into the wild and assisting in conservation efforts.  So, everything was good on that front. 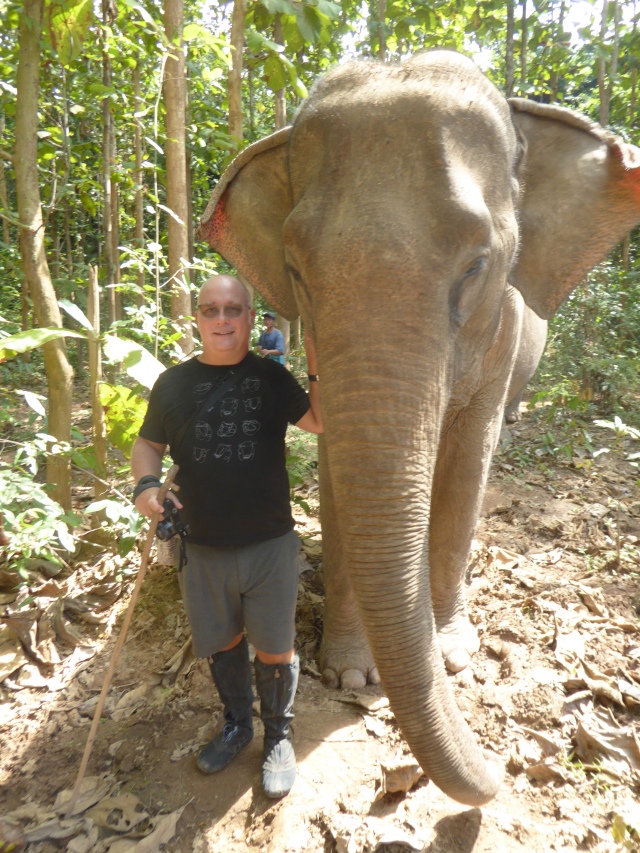 Taking a break with one of the elephants at Mandalao.

But, we felt the tour oversold and under performed.  Although we were picked up at 9:15 and returned to town around 2:15, and although the Mandalao website suggests two hours will be spent with the elephants, we only got to spend approximately one hour  with the elephants. 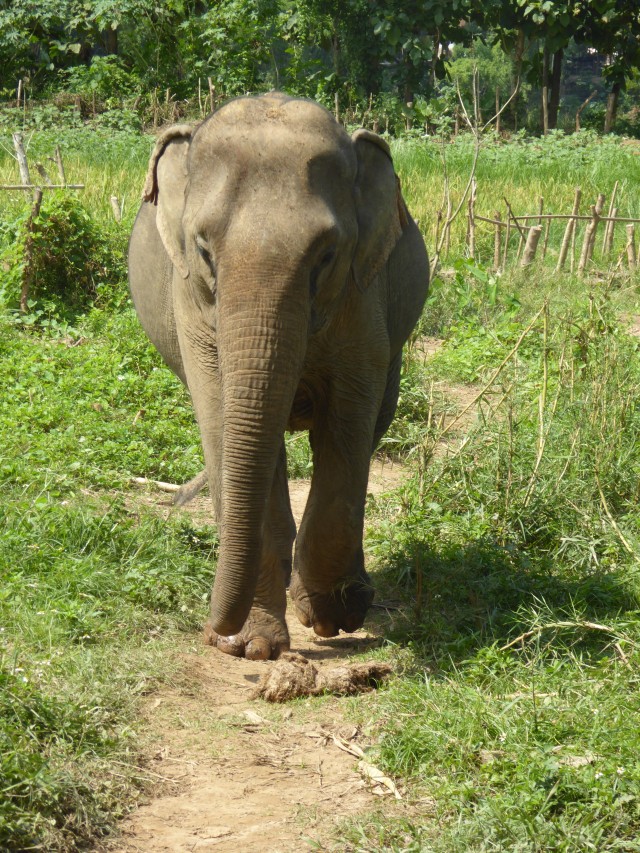 And, while we did get to feed the elephants a bunch of bananas before our trek with the elephants started, the Mandalao website indicates there will be two feeding times, not just one.

A brief glimpse of a momma and baby elephant at Mandalao.

And, the website says that there is bath time, dependent upon the weather.  Well, there was no bath time, and nobody even mentioned bath time.  Perhaps it was too cold that day for a bath, but if that was the case the guide should have told us so.  And, we were pretty much instructed that we had to tip the two mahouts $6 each at the end of the walk even though we had already paid $200 for the tour and everything we have read indicates that tipping is not expected in Laos.  (It isn’t the amount that bothers me; it is the fact that it was pretty much demanded of us in a country where tipping is not common and on a tour that was already way overpriced.)

Feeding our elephant bananas at Mandalao.

It wasn’t a complete waste of a day.  We did get to trek through the forest for an hour with two elephants wearing oh-so-sexy boots, which was pretty darn cool.

I just really wish we had actually gotten what we paid for and what was advertised. 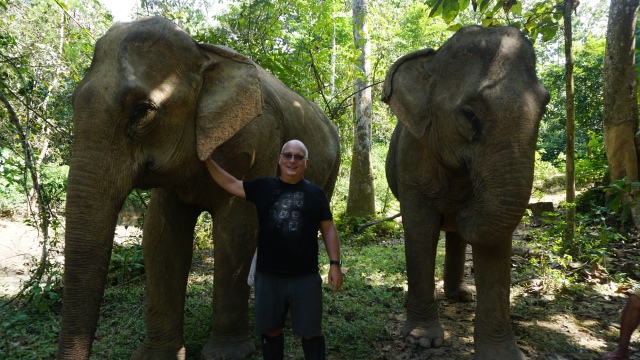 Robert hanging out with the elephants at Mandalao.

So, would we recommend the tour?  If you’ve never before interacted with elephants, absolutely yes.  If you have, we wouldn’t bother.

Lisa has a degree in biology and another in law and has spent the last 20 years working as a patent litigator. She is a voracious reader of young adult dystopian fiction and watches far too much bad tv. She loves pretty much anything to do with zombies, and doesn’t think there is anything weird about setting an alarm at 6 am on a weekend to stumble to a pub to watch her beloved Chelsea boys. Robert has had many professions, including a chef, a salesman, an IT guy and most recently, a stay at home dog dad. He speaks Italian and hopes to learn Spanish on this trip. He loves nothing more than a day spent sailing, hopes to do more scuba diving, and rues the day he introduced Lisa to football (i.e., soccer).
View all posts by theschneiduks →
This entry was posted in Laos and tagged luang prabang, nature photography. Bookmark the permalink.