If you are what you eat, I am currently nothing but a big bowl of khao soi. We spent 14 nights in Chiang Mai, and I ate 17 bowls of khao soi in that time. I know, I know, some of you (ahem…mom) are thinking “she is going to get fat eating all that khao soi.” So, let me remind you that in 14 days there are at least 28 meals (more if, unlike us, you eat three meals a day). And, you should know that: (1) I walked up to 6 miles (roundtrip) for a bowl (no, I’m not claiming it was uphill in the snow both ways, as Chiang Mai is pretty flat and I doubt it has ever snowed there); (2) with the exception of our food tour and a night at a street market, I ate very little other than khao soi while we were in Chiang Mai; and (3) that serving sizes of most bowls of khao soi are quite small, even for Thailand.

What is khao soi you might ask? The short answer: a little bit of heaven on earth. The long answer: Khao soi is basically a curry soup with both soft yellow egg noodles and crispy fried noodles. The protein is most typically a chicken leg, but you can find chicken breast, beef, pork, and even seafood depending on where you go. It is served with a plate of accoutrements on the side — generally lime, shallots, and some sort of picked green. Opinions vary as to what is the defining bit of a bowl of khao soi — some people swear by the broth and the level of spice. Some swear by the soft noodles and their texture. Some swear by the drizzle of coconut milk on the top. Those people would all be wrong — while all of the components work together to form the perfect symphony, the crispy noodles really make or break this dish in my humble opinion.

If you want to know where to grab a great bowl, a very good bowl, an ok bowl, or a horrible bowl of khao soi in Chiang Mai (with all due respect to Anthony Bourdain and Andy Ricker), keep reading.
The grand champion and purple ribbon winner is…..

Khao Soi Khun Yai. This nondescript restaurant tucked into an alley/parking lot on the side of a temple serves one fine bowl of noodles — so good I nearly picked up the bowl and slurped down the remaining sauce after the noodles and chicken were all gone. The sauce was on the thicker side, approaching a gravy consistency, with a drizzle of coconut milk on top. The spice level was fairly high, but in a good way. The crispy noodles were very thin and out of this world delicious. The protein choices were chicken (which was cut into small pieces), pork, and beef. The portion size was small, but at only 40 Baht I didn’t feel at all cheated — instead I seriously just should have ordered a second bowl but I was saving room for trying additional an restaurant later that day. Note that you order your meal at the counter, sit, eat, and then pay. My only regret is that I ate here near the end of our trip and didn’t have time to return. Next time! 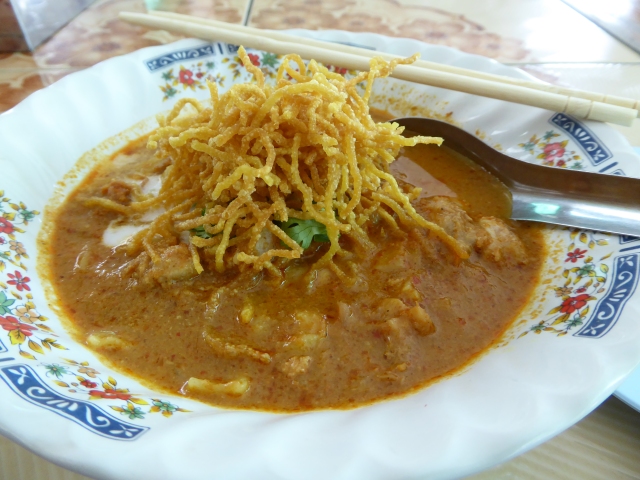 Blue ribbon award winners (in no particular order) are:

Khao Soi Nimman. OMG this was some amazing khao soi served in a very trendy neighborhood. Not too much coconut milk, just the right amount of spice for my mid-western palate, layers of flavors, and plenty of crispy noodles. A wide choice of proteins was available (including seafood, which I didn’t see anywhere else), but I stuck with the tried and true chicken on both our visits. Robert got two different types of pork. I know some people don’t like this place because it is touristy and upscale, but I thought it was quite good. A little over 100 Baht per bowl, depending on your protein, so on the expensive side, but worth it. 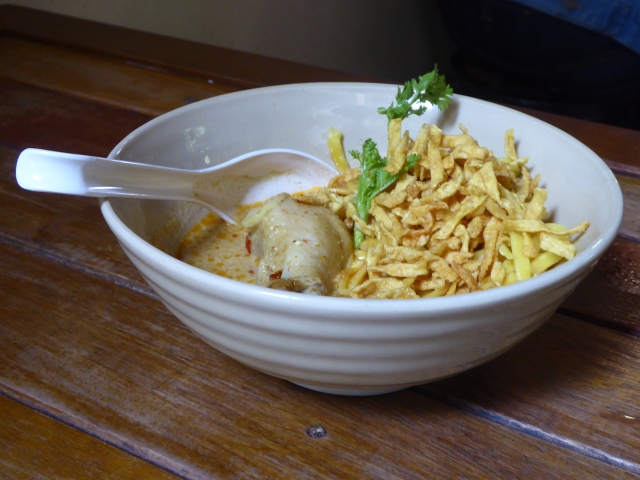 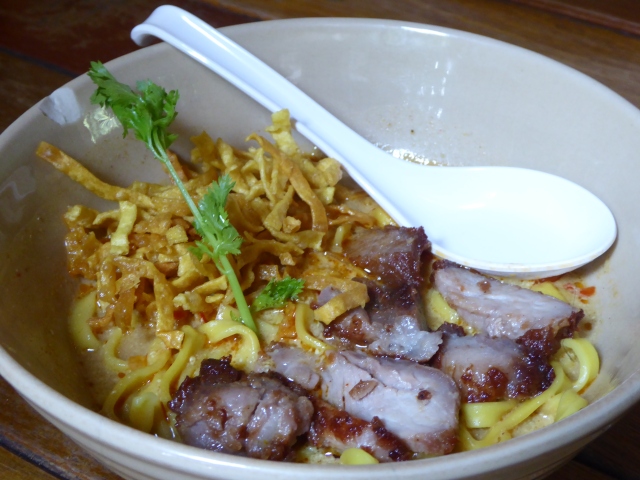 Kanjana. This was a delightful little (actually, this was a big one) bowl of khao soi. Very heavy on the coconut milk, which made it extremely rich. But with enough spice to cut the richness. Unlike most places, this khao soi was served with breast meat. It also wasn’t served with the usual accoutrements — no concern here since I only use the lime. It was so good, I had it twice! I’m pretty sure it was 105 Baht.

Khao Soi Mae Sai. A bit outside the city walls, this place came highly recommended by our street food tour guide who said it was her absolute favorite. I hadn’t planned on visiting this restaurant, but squeezed it in on our last day after that recommendation and, I have to admit, it was pretty darn good. One of the spicier bowls I ate, but nicely balanced. And the crispy noodles were plentiful. Definitely worth the trip, especially at only 45 Baht per bowl. 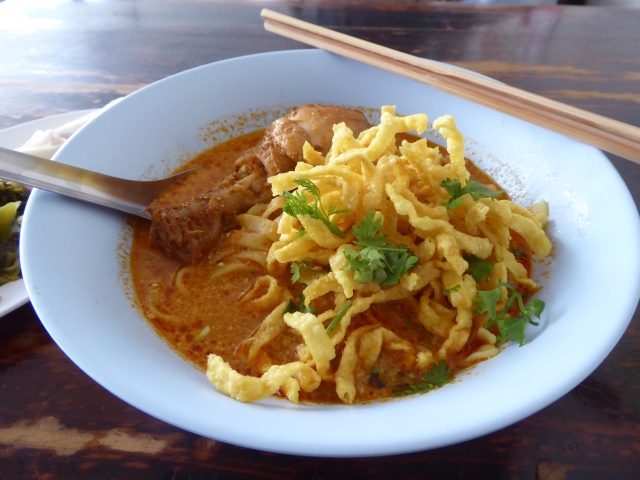 A red ribbon goes to….

Galangal Cooking Studio. I made my own khao soi here. Sadly, it was badly in need of an additional kick (my own fault – I should have added more curry paste). And, the crispy noodles weren’t very good. So, not blue ribbon quality. But, I now know how to make my own khao soi (or, more accurately, Robert can now make this for me in the future….) so that means this has to get a ribbon!!!! 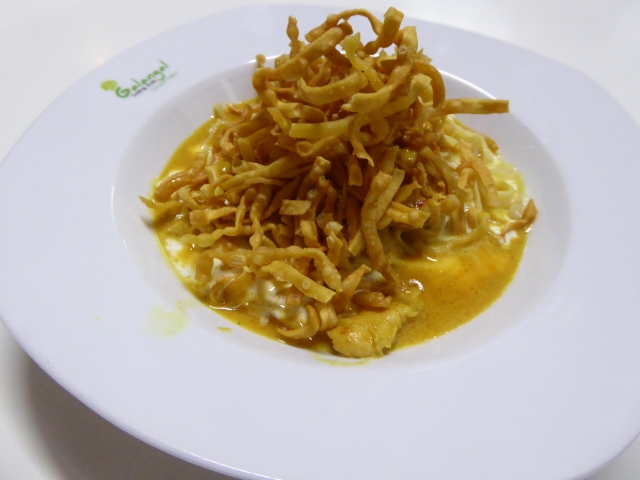 A green participation ribbon goes to (in no particular order)….

Dash. Absolutely fine, but nothing special, and a rip-off at 180 Baht per bowl.

Sunday night walking street vendor. I have no idea of the name of the vendor, but she was set up inside the grounds of one of the wats on the south side of Rachadamnoen Road. She had a big pile of boiled noodles and another big pile of crispy noodles and a big vat of curry sauce and combined them to order. Plus, she had a side table full of accoutrements. I didn’t even care that I was eating out of a plastic bowl. I think this one was 40 or 50 Baht.

Street vendor at Le Dta’ Wan Food Market. Plenty of crispy noodles and quite a bit of spice, but I would say it was way overpriced for what it was at 100 Baht.

Coconut Shell. The broth here had a nice flavor with a nice kick. There were a ton of egg noodles, but they were very poorly cooked — some were under cooked and others were over cooked. Plus, there were not nearly enough crispy noodles. I would have it in a pinch, but it wasn’t a favorite. Can’t recall price.

Writer’s Club and Wine Bar. Sadly, a very one dimensional bowl of khao soi and the crispy noodles tasted like wet cardboard once dipped in the soup. Plus, it was a bit oily for my taste. Can’t recall price.

The vendor at the Sunday night walking street. Again, no clue as to the name. She was on the far Eastern side of the market. Only 40 Baht.
Black dishonorable mention ribbons have to go to four places….

Khao Soi Lam Duan. So….this one pains me. Both Anthony Bourdain and Andy Ricker recommend this place (which is well outside of the walls of the old city and, in fact, across the river), and I entered with high hopes. This was certainly the spiciest bowl I ate, but it was one-dimensional. And, there were barely any crispy noodles at all. It doesn’t even look good in the photo. Right? And there were no fans going so I was dripping wet while I ate. Maybe I went on an off day? Maybe they haven’t been able to deal with the Bourdain effect? 50 Baht per bowl. 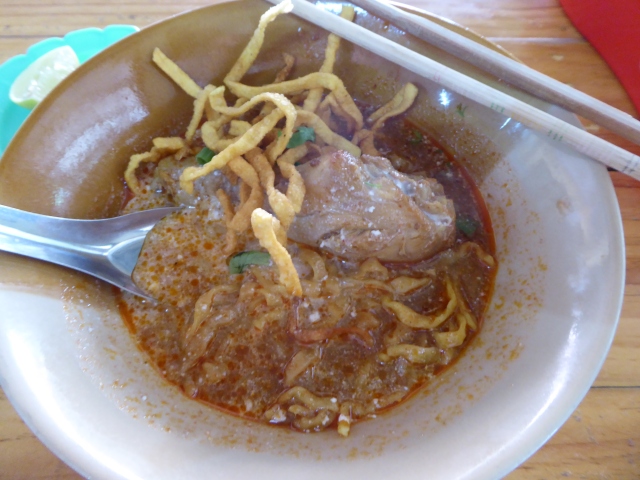 Huen Phen. Not good at all (even though it was supposed to be on of the best bowls in the city). Had an odd taste of chili powder and the bright red color was a bit off-putting. Not nearly enough noodles. Not recommended at all. In fact, I didn’t even bother to finish it, although Robert enjoyed the hard boiled quail eggs that came on the side. I’m pretty sure it was 105 Baht.

Bird’s Nest Cafe. This was the first bowl of khao soi I ate in Chiang Mai and it was very disappointing. For starters, it was covered in pea shoots. What? And, the soup included carrots and pea pods. Again, what? I think they were trying to go for upscale and it just resulted in weird.

The Gallery. I didn’t know khao soi could be absolutely tasteless until I tried this bowl. No flavor, no spice, no fun.

What is your favorite bowl of khao soi?

Lisa has a degree in biology and another in law and has spent the last 20 years working as a patent litigator. She is a voracious reader of young adult dystopian fiction and watches far too much bad tv. She loves pretty much anything to do with zombies, and doesn’t think there is anything weird about setting an alarm at 6 am on a weekend to stumble to a pub to watch her beloved Chelsea boys. Robert has had many professions, including a chef, a salesman, an IT guy and most recently, a stay at home dog dad. He speaks Italian and hopes to learn Spanish on this trip. He loves nothing more than a day spent sailing, hopes to do more scuba diving, and rues the day he introduced Lisa to football (i.e., soccer).
View all posts by theschneiduks →
This entry was posted in Thailand and tagged anthony bourdain, chiang mai, khao soi. Bookmark the permalink.

4 Responses to Drowning in Khao Soi in Chiang Mai