Kicking back in Chiang Mai

Posted on October 8, 2018 by theschneiduks

As you can tell from the radio silence issuing from the Schneiduks, our time in Chiang Mai has been pretty quiet.  We full-on embraced the digital nomad/cafe culture here, and hardly did much of anything.

Most days, we slept in way later than we should have (hello, 10 am wake up times!) and then made our way to breakfast/lunch.  There are so many restaurants here, and we feel like we have barely scratched the surface.  Just this morning we walked down a street we had never been on before and it was littered with cute looking places we wish we had time to try.

Most days we walked for miles.  Whenever we got too hot, we would stop into one of the hundreds of coffee shops for cold drinks.  Robert almost always got iced coffee and it was almost always good (except when we could only find a chain shop).  I lost count of the number of Italian sodas I consumed.  And, they have something called an orange frappe (orange juice blended with ice and who knows what else), and it is amazing.  Add in the lime and ginger soda they sell some places and I am completely hooked on Thai cafes.

Some of those long walks were to visit temples.  There are over 300 Buddhist temples in Chiang Mai.  We managed to visit about 15.  A pitifully small number, right? 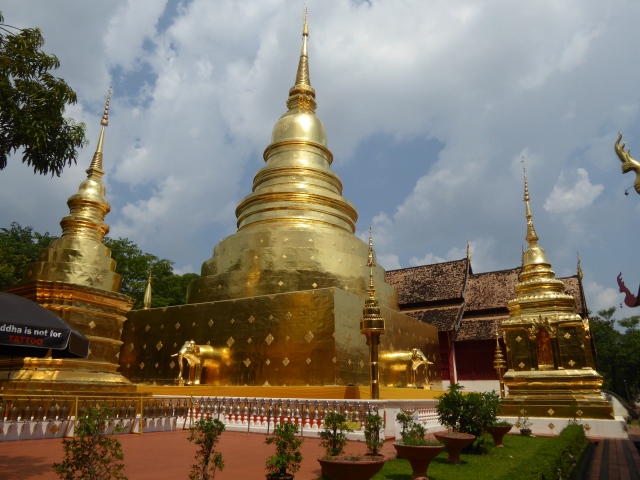 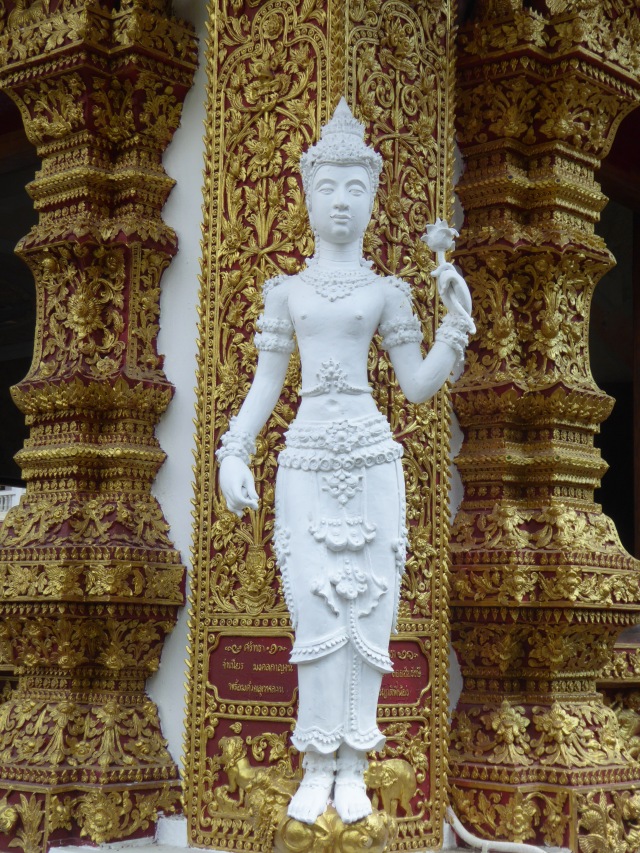 Some of those long walks took us to the local movie theater at the Maya Mall.  Movies are a bit different here:  (1) they are cheap — about $5 per person; (2) all the seats are assigned so most people show up about a minute before the scheduled start time of the movie; and (3) they play the King’s anthem before the movie and everyone stands for it.  We ended up seeing four movies here.  The House With A Clock in its Walls was surprisingly good for a children’s movie.  A Simple Favor reinforced that Anna Kendrick is a national treasure.  And who would have guessed that Blake Lively could actually act????  But Hell Fest was absolutely awful.  And Johnny English Strikes Back (which we saw only because it was the only remaining English language film showing) made us seriously question whether we have any sense of humor or not.  Everyone else in the theater was giggling, while we were considering walking out.

Some of our long walks were to khao soi restaurants.  I ate a metric ton of khao soi in the last two weeks.  Anyone who knows me well, knows that I hate dark meat chicken (poor Robert found that out the first time he cooked for me and made chicken thighs….), so Robert got to eat a ton of chicken drumsticks out of my khao soi.  More on that in a future post. 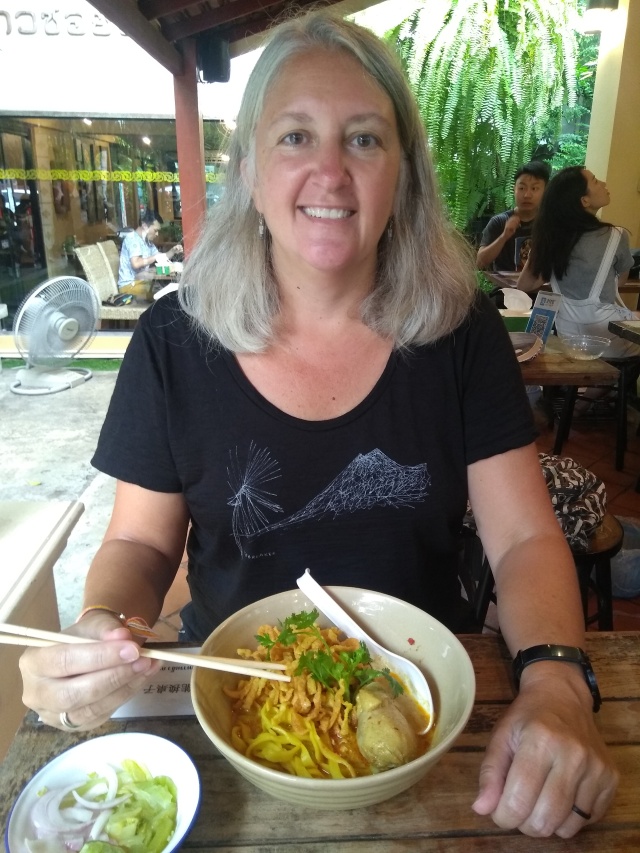 A good bowl of khao soi makes me so happy.

Some of our long walks were to and through the numerous night markets, where we ate way too much street food.  One night, we ate khao soi, two types of pad thai, chicken biryani, grilled sausage, a cashew waffle, and a Nutella roti.  And, all together, it was under $10.  We both felt a bit sick after that outing….(OK, fine, fine, Robert ate more sensibly and I was the only one who was sick after that outing….). 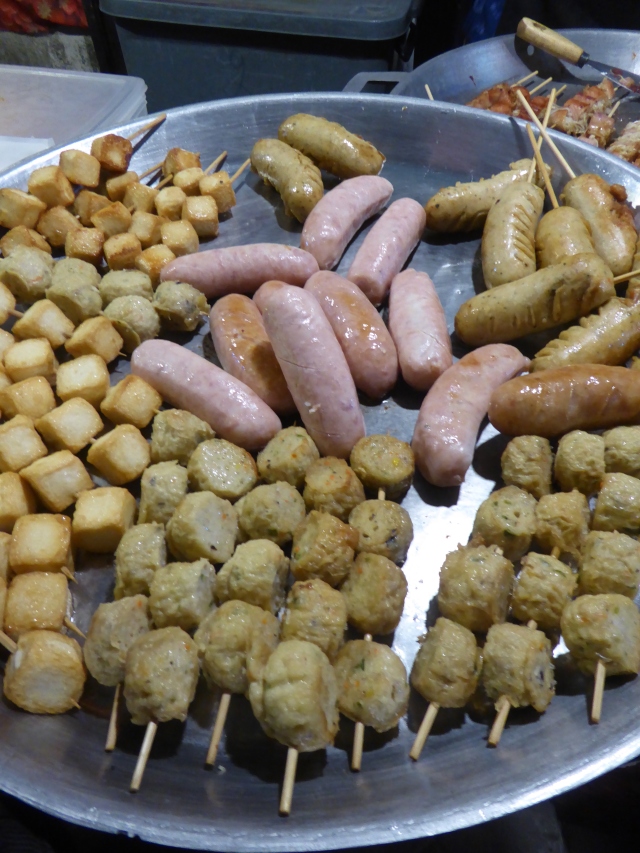 We also took a cooking class with Galangal Cooking Studio.  It wasn’t as good as the class we took in Ubud, but what was really nice about it is that we each got to pick our own dishes so between the two of us we cooked eight different things.

Robert also took a 60 km bike ride without me one day.  I’m glad I declined to participate in that trip.  He came back a sweaty mess with what the Dutch tourists on the trip affectionately called “wooden ass.”   But he did get to eat this amazing looking cookie and I’m very jealous about that.  Robert (who is always in charge of anything tech related) was very impressed that I managed to top off my sim card at the local 7-11 without his help that day so I could text him while he biked.

Tonight we took a street food tour.  More on that in a future post (suffice it to say we are both too full to move right now).  On Wednesday, we are off to Sukkhothai to soak up some culture.

Lisa has a degree in biology and another in law and has spent the last 20 years working as a patent litigator. She is a voracious reader of young adult dystopian fiction and watches far too much bad tv. She loves pretty much anything to do with zombies, and doesn’t think there is anything weird about setting an alarm at 6 am on a weekend to stumble to a pub to watch her beloved Chelsea boys. Robert has had many professions, including a chef, a salesman, an IT guy and most recently, a stay at home dog dad. He speaks Italian and hopes to learn Spanish on this trip. He loves nothing more than a day spent sailing, hopes to do more scuba diving, and rues the day he introduced Lisa to football (i.e., soccer).
View all posts by theschneiduks →
This entry was posted in Thailand and tagged chiang mai, khao soi, street food. Bookmark the permalink.