Off the beaten track in Siem Reap

Posted on September 18, 2018 by theschneiduks

One of the things Robert and I like best is getting off the beaten track a little bit and seeing how people really live in the places we visit.  We were thrilled then to come across the combo tour offered by Dani of Bees Unlimited.  This tour is billed as a combination of a market tour and a cultural tour, but let’s just say I think it should be called the “all-you-can-eat while seeing the countryside tour.”  We started the tour hungry and finished it feeling absolutely stuffed (in a good way, of course).

Dani picked us up bright and early yesterday morning with his tuk-tuk driver.  He quickly whisked us off to a local bakery.  Honestly, we would have never even known it was a bakery if we had walked by on our own.  But it was, and they had baguettes still warm from the oven. Yum!

After changing some money, it was off to a local market where the eating began in earnest.

We started with some steamed sweet potatoes.  A bit too sweet for me.  And, not my ideal breakfast food. 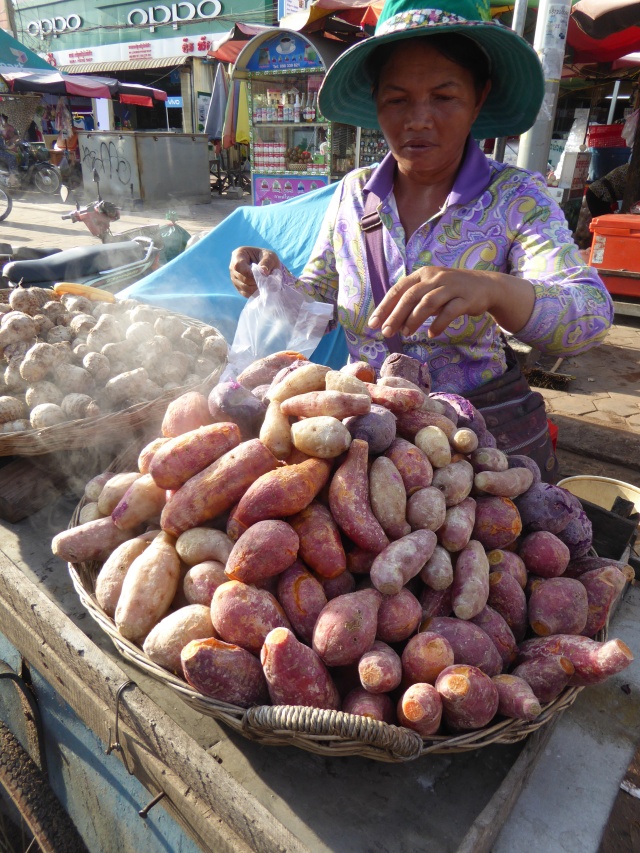 Steamed sweet potatoes at the market.  There is a small fire below the potatoes keeping them warm.

Next up, fresh grilled corn on the cob.  Here in Cambodia, you can sometimes choose between sweet corn and starchy corn.  I, of course, picked the sweet variety.  And, Dani taught me a trick — if you spread a lime segment on the corn, it completely changes the flavor profile.  Try it, it was really good! 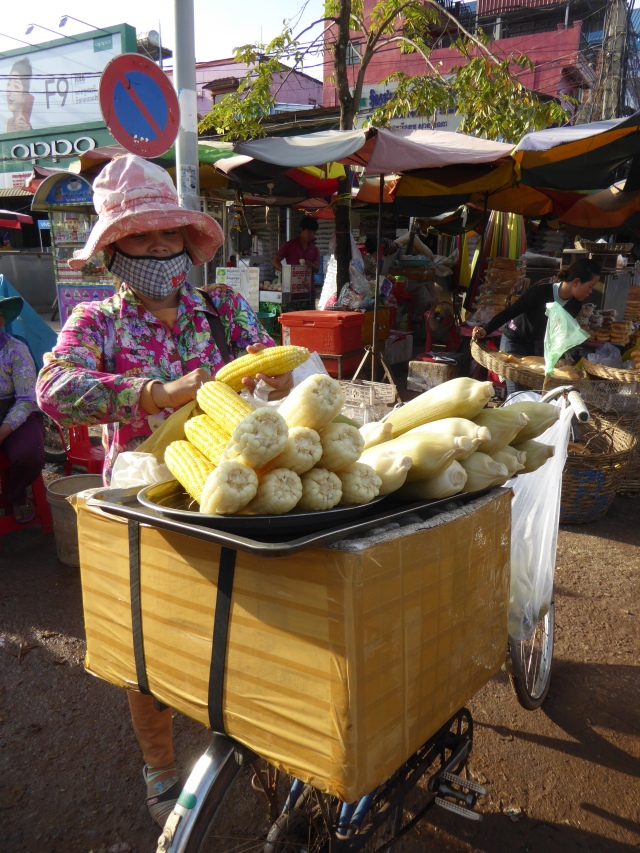 Steamed corn at the market — the bright yellow is sweet and the whiter corn is starchy.

Then, we dove into the market with both feet.  We’ve done market tours before, but I have to say this market was one of the more interesting markets we have seen.  The market was chaotic, with scooters driving up and down the aisles.  Parts of the market were kind of disgusting, like the stack of pig heads (which I saw, but didn’t get a picture of).  Or the beheaded and skinned frogs that WERE STILL MOVING!  Sadly, at least from what we saw, there were no snakes for sale yesterday. 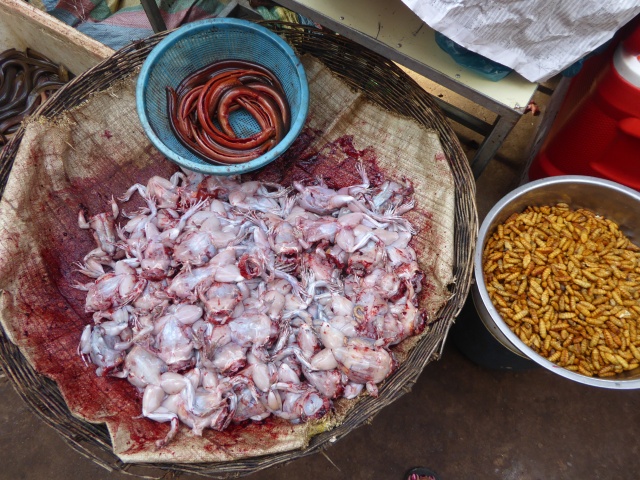 The frogs that were still moving.  Along with some eels and some worms. 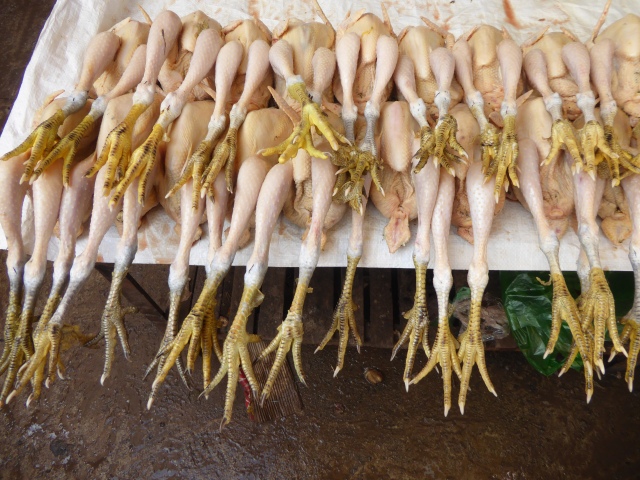 Chickens at the market.  I love that the feet are still on the chicken.

Then, even though I was already feeling full after all that starch, it was time for a real breakfast. 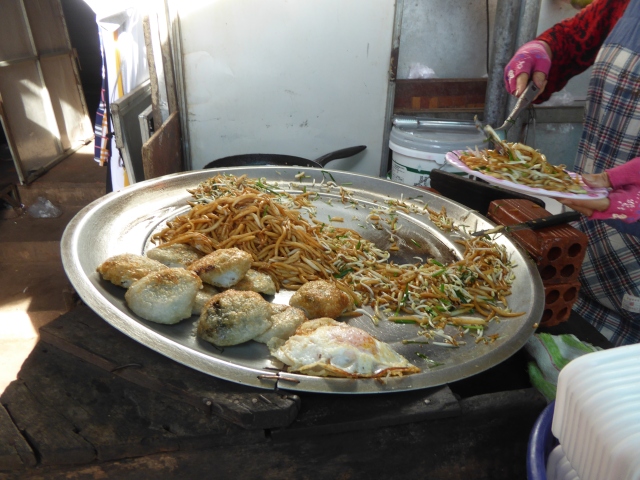 A Cambodian breakfast — fresh rice noodles with bean sprouts and chives, a rice cake stuffed with chives, and a duck egg.  If memory serves, breakfast for the two of us came to something like $1.25 (I skipped the rice cake and the egg, but still….).

And, we still weren’t done eating!  It was time for sweets. 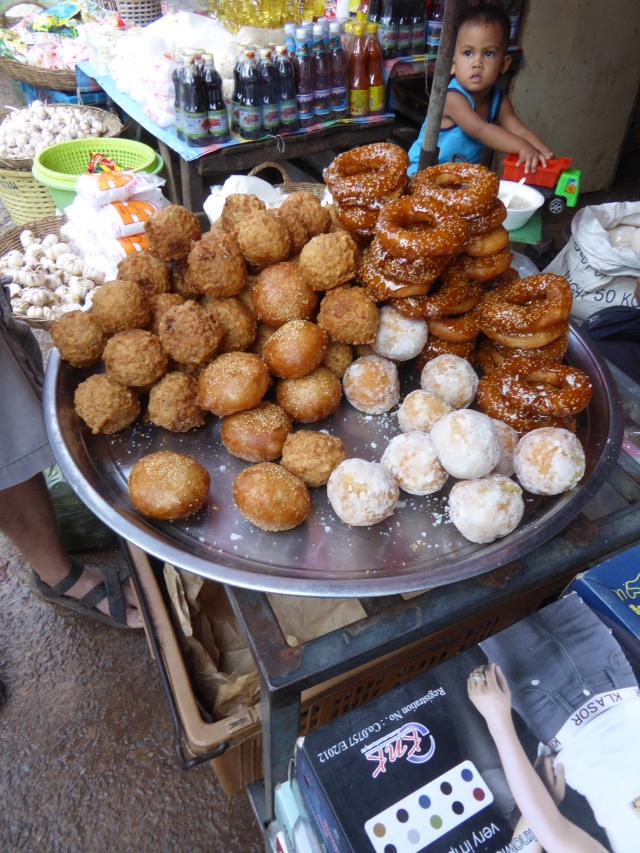 Num ambok and num croich — yummy fried pastries — one had banana and coconut and the other had bean curd (and, I think, coconut) and both were excellent.

Then, it was more walking around the market, nibbling on things like steamed peanuts and local fruits and spicy nuts and something like a hush puppy made of jicama. 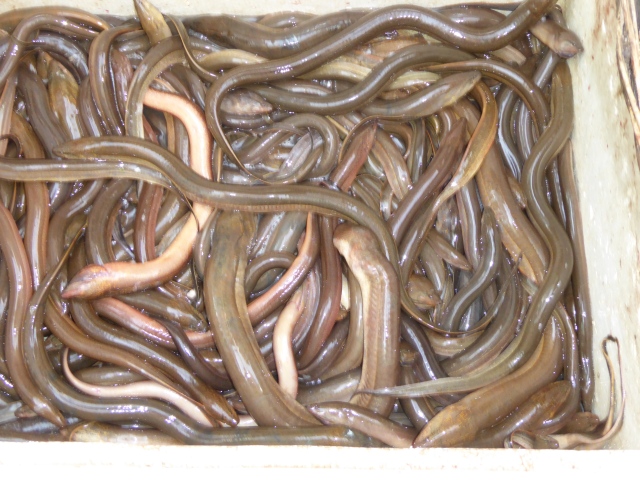 Eels at the market. 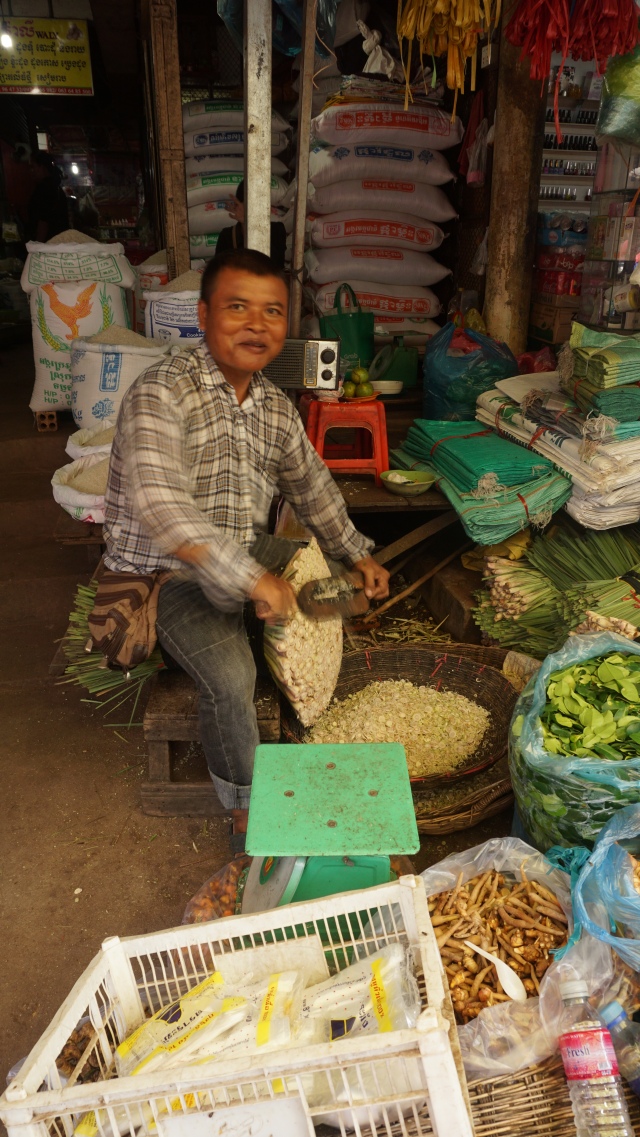 Shaving lemongrass at the market.  It smelled so good! 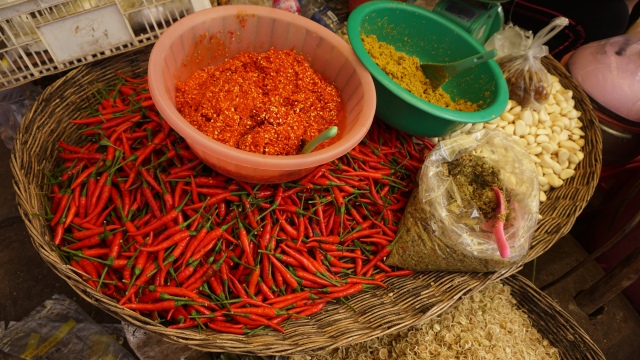 Curries and chilies — the colors were amazing!

Once we were ready to burst like Violet Beauregarde in Willy Wonka, it was time to hop back in the tuk-tuk to head out into the country.  But, before we got far, the tuk-tuk was pulling over to the side of the road for no apparent reason.  Turns out, it was time for crushed sugar cane juice with orange juice.  We had tasted sugar cane juice before and weren’t huge fans, but the addition of the orange juice changed the flavor entirely and we loved it. 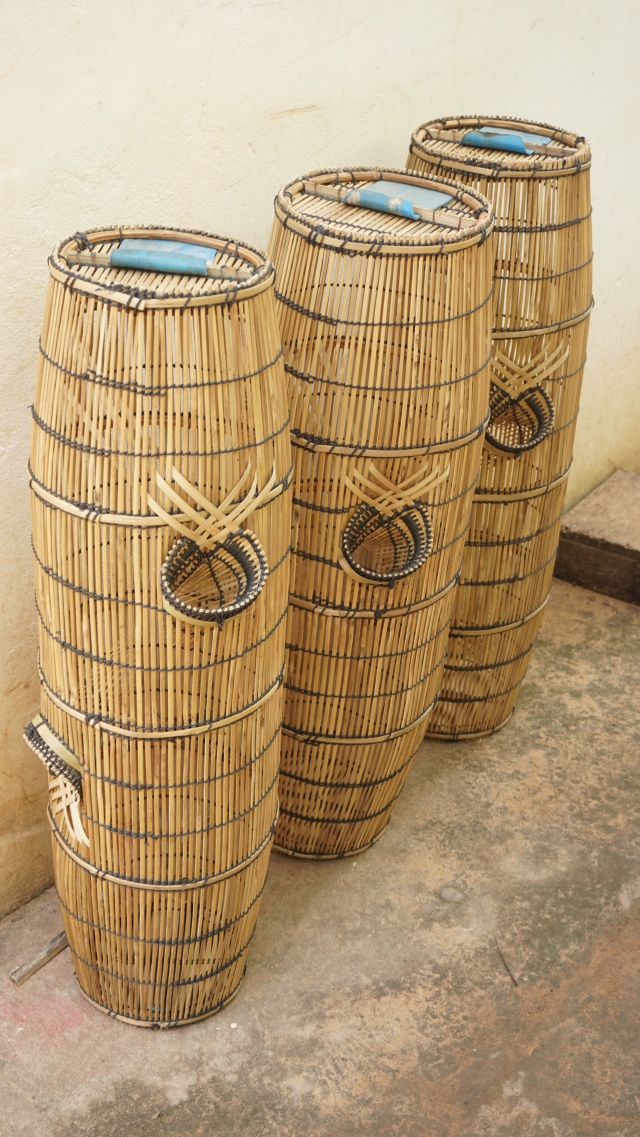 A Cambodian fish trap.  The trap is put in the water where there is a current flowing by.  The fish swim in the small hole and then cannot get out.

We saw dog being grilled on the side of the road.  We didn’t stop for that one.  So sad.

We also saw incense sticks being made by hand.  This woman collects the various herbs and barks used to scent the incense and dries them.  She then turns them into a paste.  She then rolls the paste onto sticks she has made herself.  It was amazing to watch.  Each stick was identical to the stick before it.  All that effort, and 30 sticks sell for only 50 cents. 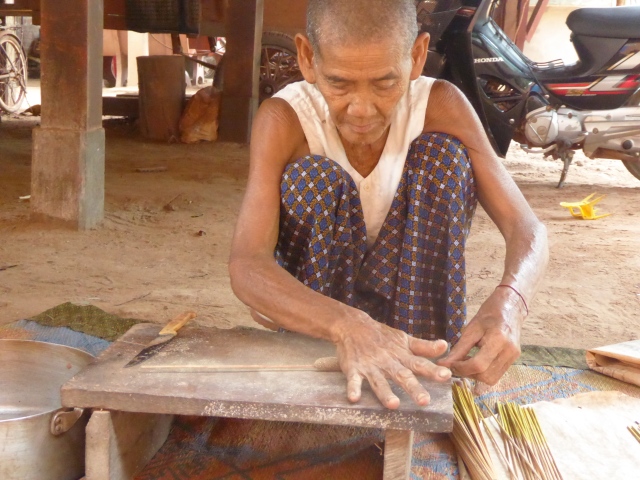 We also randomly came across a family making fresh rice paper and fresh spring rolls.  Of course we stopped — who can pass up a fresh spring roll with fish sauce — and of course they were amazing.

We also stopped into the home of a local family where the wife was a practitioner of cupping.  Guess who got cupped on the shoulder he injured in Phuket?  He said it felt really good. 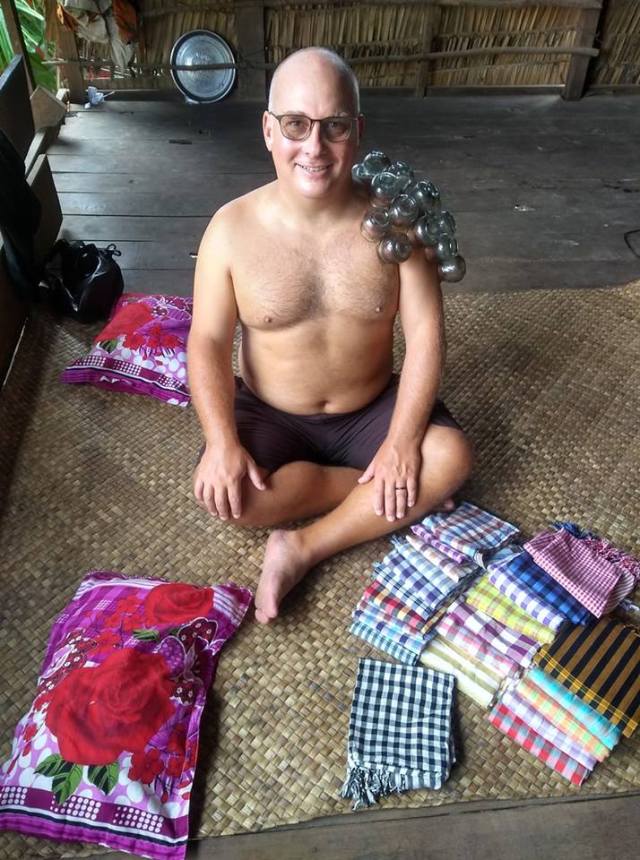 Robert getting cupped.  And, yes, we bought the black and white scarf.  Three of them as a matter of fact.  Of course we did.

But the tour still wasn’t over.  We hadn’t even finished digesting breakfast when Dani told us it was time for lunch. 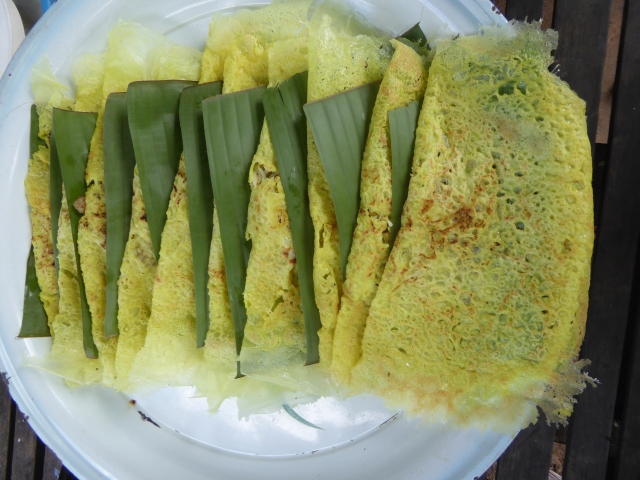 Robert also had his eye on some grilled, stuffed frog being sold on the side of the road, so while I finished up my banh xeo he went off in the tuk-tuk to grab two frogs on a stick. 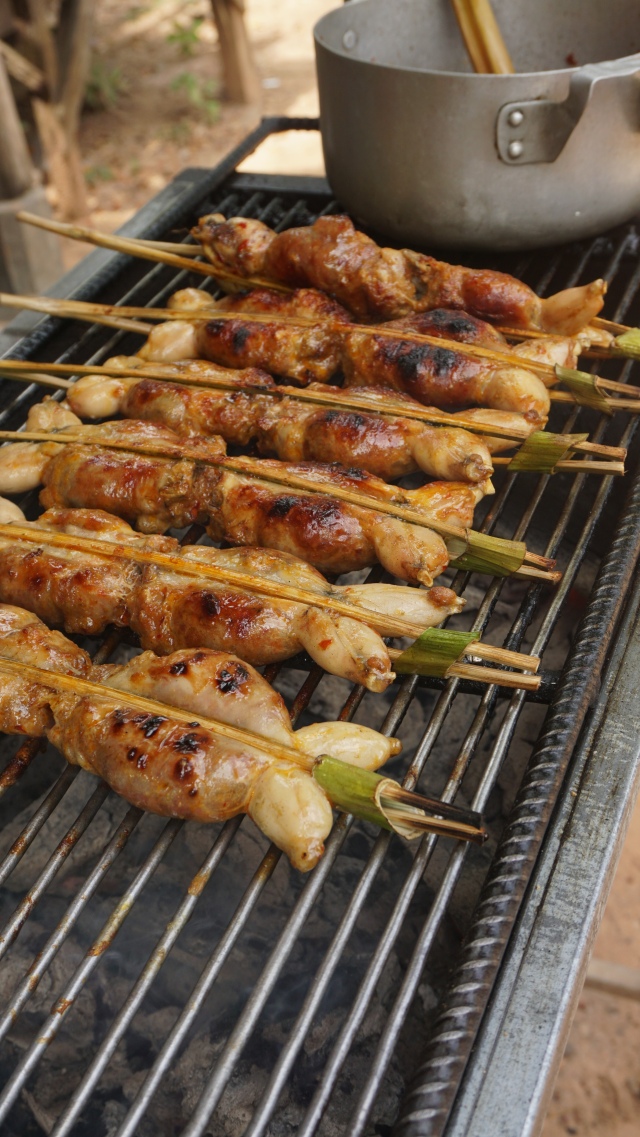 Stuffed, grilled frog.  Robert had one and our tuk-tuk driver had one.

And, then Dani said it was time for dessert. 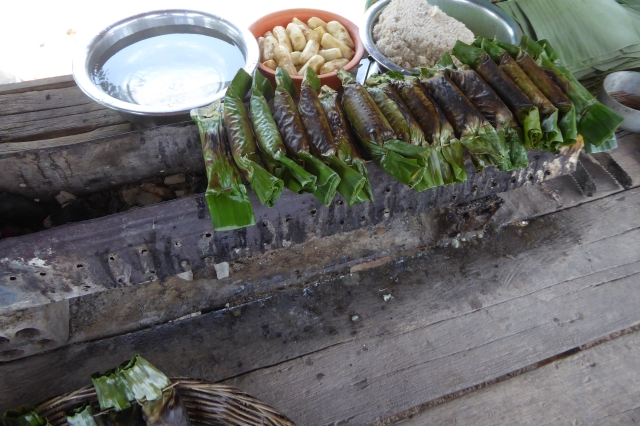 The tour was fantastic.  We got to try food we would never had tried otherwise, and we actually got to meet some locals and see how they live.  It was a great off the beaten track kind of day.

Lisa has a degree in biology and another in law and has spent the last 20 years working as a patent litigator. She is a voracious reader of young adult dystopian fiction and watches far too much bad tv. She loves pretty much anything to do with zombies, and doesn’t think there is anything weird about setting an alarm at 6 am on a weekend to stumble to a pub to watch her beloved Chelsea boys. Robert has had many professions, including a chef, a salesman, an IT guy and most recently, a stay at home dog dad. He speaks Italian and hopes to learn Spanish on this trip. He loves nothing more than a day spent sailing, hopes to do more scuba diving, and rues the day he introduced Lisa to football (i.e., soccer).
View all posts by theschneiduks →
This entry was posted in Cambodia and tagged off the beaten path, siem reap, street food, street photography. Bookmark the permalink.