A second visit to Angkor Thom

Posted on September 6, 2018 by theschneiduks

Siem Reap just might be the death of us.  Getting up at 5:30 in the morning for a tour?  Crazy!  (And, honestly, we started late as many people arrive at the temples in time for sunrise.  So.  Not.  On.  Our.  Agenda.)

Anyway, after an amazing breakfast at our hotel (the pain au chocolat is to die for), our tuk-tuk driver picked us up to take us to Angkor Thom, a walled city built in the 12th century that was once the capital city of the Khmer empire.  Robert and I visited Angkor Thom back in 2007, and it was one of our favorite temples.  And, I can happily report that we still love it.

Rather than write much about it (given that (1) we didn’t have a guide so (2) we don’t know anything that you can’t read all about on the internet), I’m just going to show you some of our favorite photos from the visit.  If you go, get there early — right when the temple opens at 7:30.  The massive tour groups started to arrive shortly after us, and by the time we left they were beyond annoying. 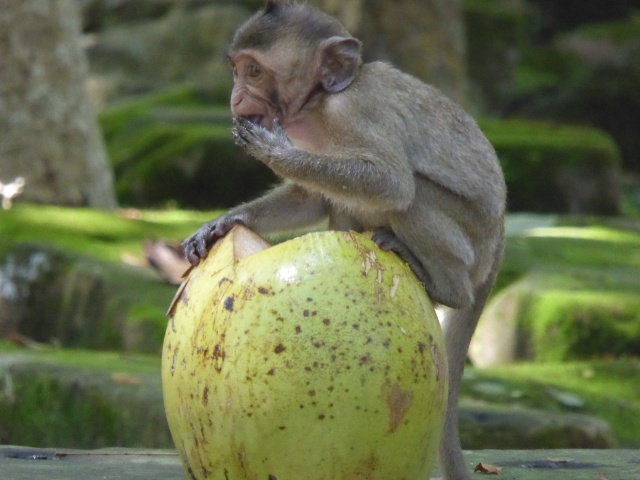 A really cute monkey devouring a coconut.  What?  You didn’t come to Angkor Thom for monkeys????  These guys were about the most chilled out monkeys I’ve ever seen.  They didn’t even attack the dumb tourist that intentionally hit a baby monkey on the head with a selfie stick, even though an attack would have been entirely justified.

Close up of faces at Bayon.  We love these faces.  If you don’t, scroll down a ways for photos of other things.

Another close-up of a face at Bayon.

More Bayon faces, this time with fluffy clouds.  Are you sensing a theme yet???

The last of the Bayon faces we will bore you with. 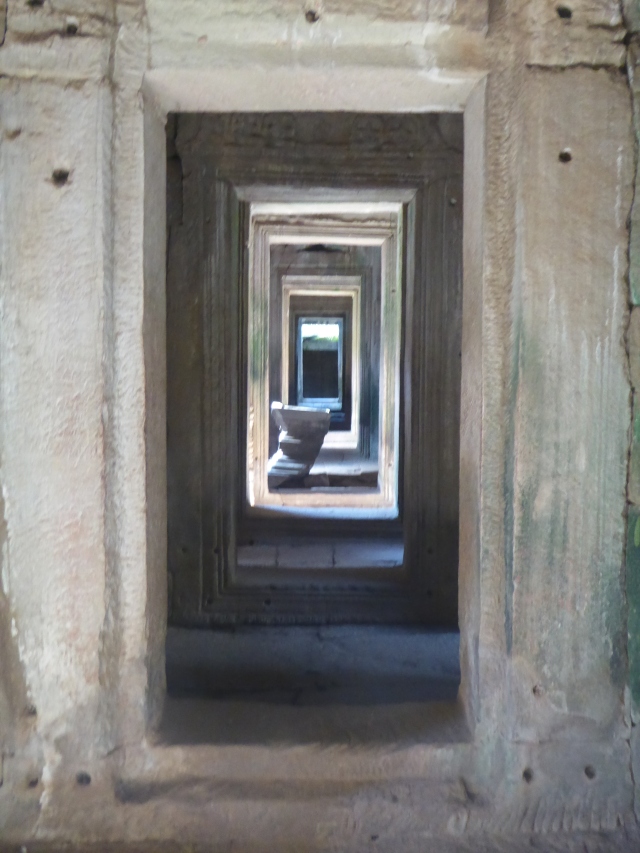 A hallway at Bayon.  I have no idea how we managed to get this shot with nobody else in it.

The most photogenic cat ever (at Bayon).

Pretty sure this is Baphoun Temple (but don’t quote me on that).  We didn’t walk up the stairs, as we were sweating buckets at this point. 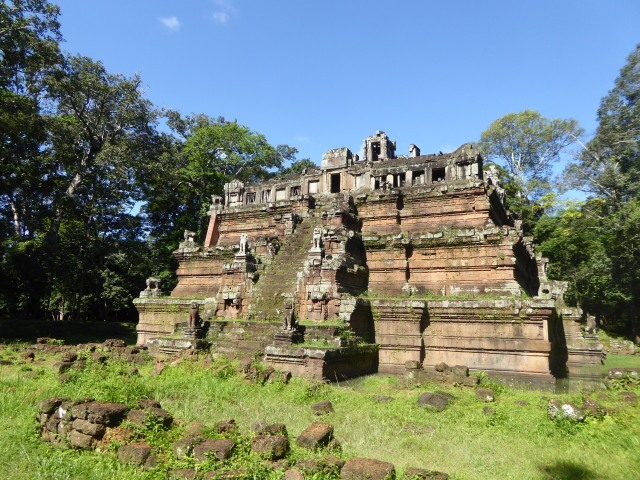 Pretty sure this is Phimaenakas (but, again, don’t quote me on that).  This one was closed to the public.

Carvings at the Terrace of the Leper King. 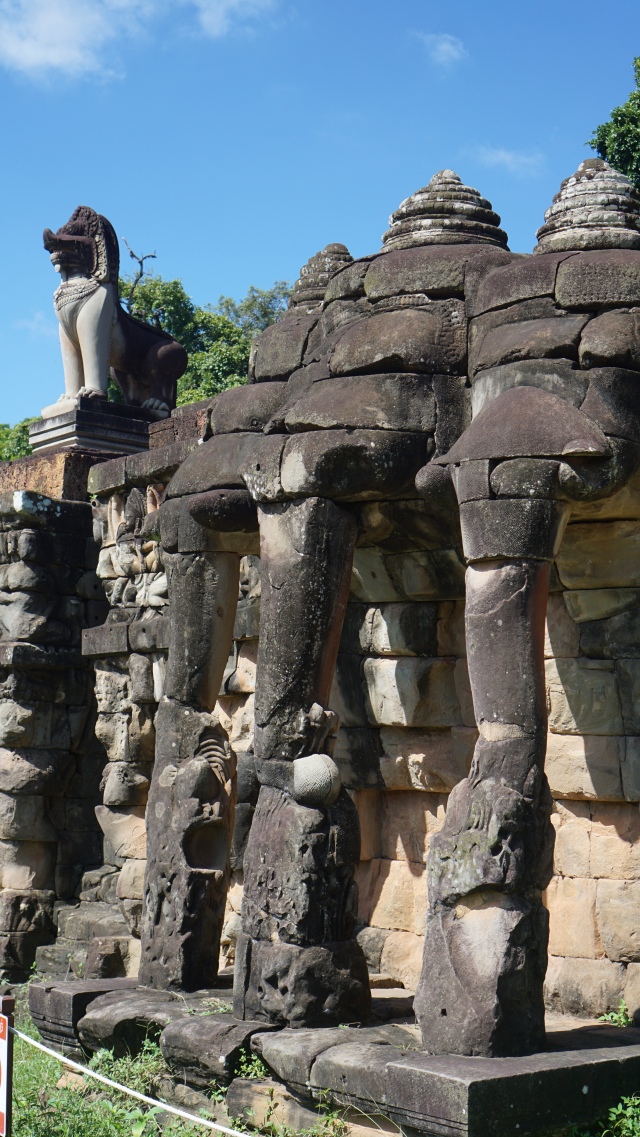 Terrace of the Elephants.

Terrace of the Elephants.  Check out that amazing blue sky.  In monsoon season. 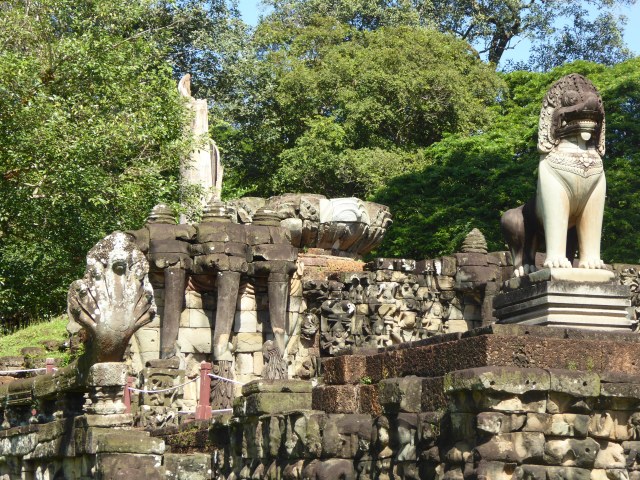 Terrace of the Elephants. 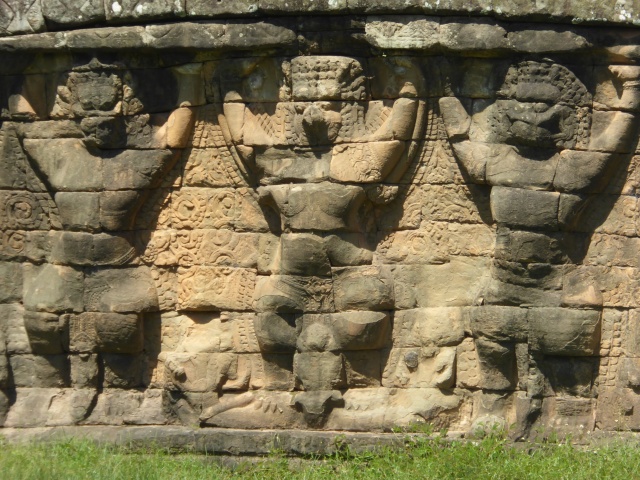 Carvings on the Terrace of the Elephants. 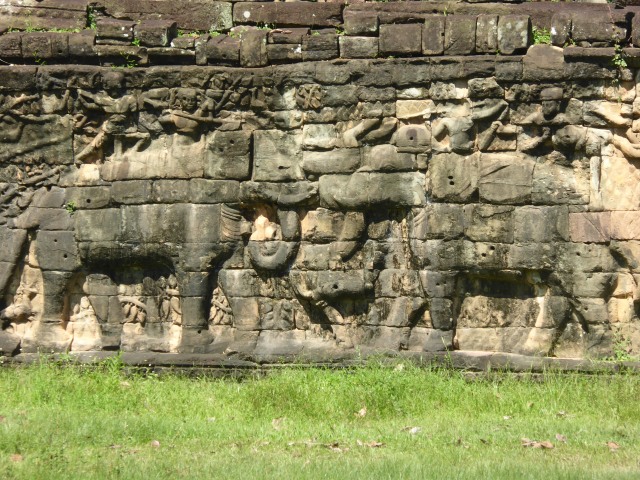 Elephant carvings on the Terrace of the Elephants.

Coming up, our photos of Ta Prohm.  But those will have to wait a day or two.

Lisa has a degree in biology and another in law and has spent the last 20 years working as a patent litigator. She is a voracious reader of young adult dystopian fiction and watches far too much bad tv. She loves pretty much anything to do with zombies, and doesn’t think there is anything weird about setting an alarm at 6 am on a weekend to stumble to a pub to watch her beloved Chelsea boys. Robert has had many professions, including a chef, a salesman, an IT guy and most recently, a stay at home dog dad. He speaks Italian and hopes to learn Spanish on this trip. He loves nothing more than a day spent sailing, hopes to do more scuba diving, and rues the day he introduced Lisa to football (i.e., soccer).
View all posts by theschneiduks →
This entry was posted in Cambodia and tagged nature photography, siem reap, unesco world heritage site. Bookmark the permalink.