Things have been a bit quiet around here lately because we have made our way to Phuket where nearly every day is the same:  sleep in, grab a nasty (but free!) breakfast at our hotel, go for a walk, grab coffee and a soft drink somewhere, lounge at the pool, practice our foreign languages, and then have dinner.  The dinner options here are not the best — lots of watered down Thai and some decent pizzas.  But you can get fresh seafood nearly everywhere.  And 200B for a red snapper?  That equates to $6.  Try to beat that!

If we are really having a crazy day, we will head out somewhere to watch the sunset, which can be pretty stunning when the clouds aren’t too thick (it is monsoon season here after all).  So, there isn’t much to write about.  And, after bragging about how we ate anything we wanted in Malaysia, I’m so not writing about the case of severe food poisoning I get here in Phuket from who knows what, particularly since here in Phuket we haven’t eaten anything we thought was on the edge of dangerous.  Nope, not going there.

We have, however, been intrigued on our walks watching the parasailing.  Pretty much the same as parasailing in the U.S., but with one significant difference.  A guy rides in the ropes of the parachute to help steer it.  But these guys are full on crazy!  They stand in the sand waiting for the parachute to lift up.  As the boat speeds away and the parachute lifts, they dangle from the cords until they pull themselves up into a sitting position.

Then, they just hang out in the ropes. 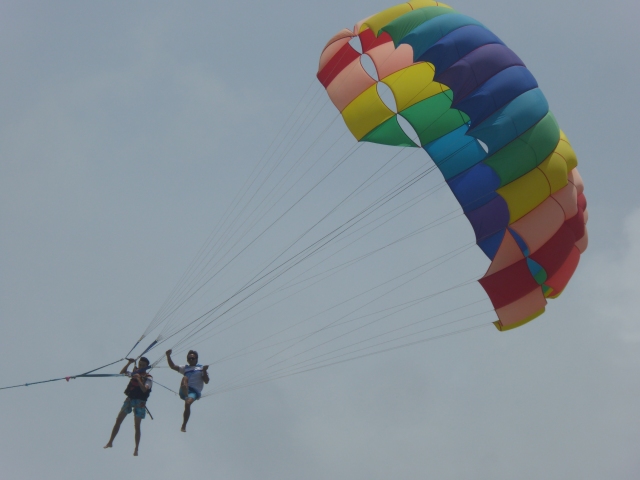 No safety line, no life jacket.  (Well, the tourist gets both, but not the local).  Nada.  Just sailing hundreds of feet above the ocean.

Then, as the ride comes to an end, they dangle from the ropes holding on with nothing but their hands.  As they get close to the ground, they jump off and the ground support guys grab the ropes and pull the rider down.

I’m telling you, certifiably insane!  But quite a bit of fun to watch.

Lisa has a degree in biology and another in law and has spent the last 20 years working as a patent litigator. She is a voracious reader of young adult dystopian fiction and watches far too much bad tv. She loves pretty much anything to do with zombies, and doesn’t think there is anything weird about setting an alarm at 6 am on a weekend to stumble to a pub to watch her beloved Chelsea boys. Robert has had many professions, including a chef, a salesman, an IT guy and most recently, a stay at home dog dad. He speaks Italian and hopes to learn Spanish on this trip. He loves nothing more than a day spent sailing, hopes to do more scuba diving, and rues the day he introduced Lisa to football (i.e., soccer).
View all posts by theschneiduks →
This entry was posted in Thailand and tagged phuket. Bookmark the permalink.