A week in Melaka

Posted on August 5, 2018 by theschneiduks

We’ve spent the last week in Melaka (sometimes spelled Malacca).  Melaka is about 2 hours south of Kuala Lumpur.  Because we are cheap, we chose not to fly and instead took a local bus to get here.  Of course, because we have really bad luck with buses, it took us nine hours (instead of the advertised six hours) to get here from Georgetown.  And, the highlight of the bus trip was when the driver actually complimented me on the fact that I didn’t use a bathroom once the entire nine hour trip!  “Fantastic!  Great job.”  I don’t think I’ve ever been complimented for not using the bathroom before….and I don’t even want to think about why the driver noticed that I hadn’t used the bathroom. 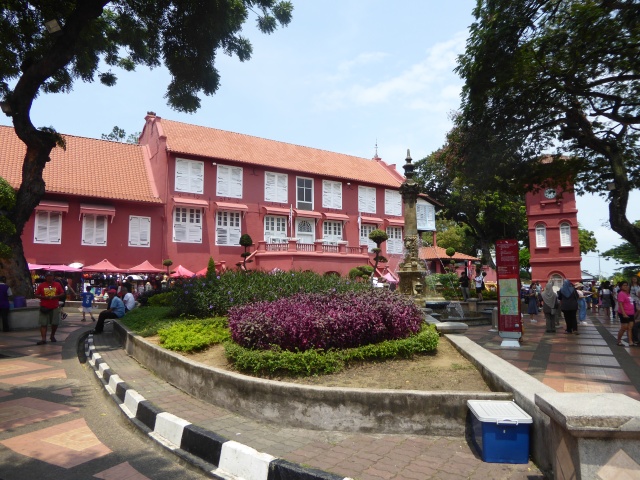 A bit of Dutch Square

Melaka was “founded” in 1377 by a guy named Parameswara (it isn’t clear to me if there were already people here then or not).  Parameswara was either a pirate or a Sumatran prince, depending on which summary you read.  He fled his country due to fear of some invaders.  He found himself in what is now Singapore, killed the local ruler, and established himself as a Raja.  But, then Thai invaders came and he fled once again.  He somehow found himself in what is now Melaka and he was resting under a tree one day during a hunt when his hunting dogs cornered a mouse deer.  The mouse deer, in turn, kicked a dog and pushed it right into the river.  Parameswara was impressed by the courage of the deer and took it as an omen that the weak could overcome the powerful and decided to found an empire right then and there.  I’m not sure why the weak overcoming the powerful was something good in his eyes, because I’m assuming anyone who was a pirate and/or a prince, a Raja, and founded a town considered himself powerful…. (although if he fled every time someone invaded, I guess that explains things).

Anyway, Melaka became a major trading port for traders from China, India, and Arabia.  By most accounts we read, things were going swimmingly.

Then, in 1511, Melaka was conquered by the Portuguese.  Apparently, things did not go so well with the Portuguese in charge — they were all about the money and Melaka’s reputation as a fair trading post plummeted.  The Dutch soon started attacking and conquered Melaka in 1641 after starving the local population (there are rumors of cannibalism….).  Then, Melaka was ceded to the Brits in the 1800’s.  Then, the Japanese controlled it during WWII.  After the war, it became part of Malaysia.  So, to say the cultural history is diverse is putting it mildly.

Our days in Melaka were nothing if not relaxing.  We slept in every single day we were here (Robert even slept until 11 one day which is just plain crazy).  Then, most days we made our way to one of the myriad places selling chicken rice balls for lunch.

Chicken rice balls are a local specialty and people wait in long lines to eat them.  Depending on the shop, you might get steamed chicken or you might be able to substitute roasted chicken.  We generally got half a chicken, so we had both white and dark meat, but today we got gizzards as well.  Yuck!  In the above picture, the steamed chicken is resting on a plate of sesame oil, which makes it even better.  The rice balls are cooked in chicken broth, typically served warm, and you dip them in chili sauce.  The chili sauce tastes different at every shop, but the best are not too full of vinegar.  This is a delicious meal and generally only cost $5 for the two of us (with soft drinks).

After our lunch, we generally wandered into a coffee shop so Robert could get his caffeine fix (the Nescafe served in the hotels just doesn’t cut it, go figure) and I could get a lime juice or something sweet.  We were always surprised that our coffee shop visits cost more than our lunch!

After coffee, it was time for sightseeing.  We saw some cool street art.

Not sure who these women are…. 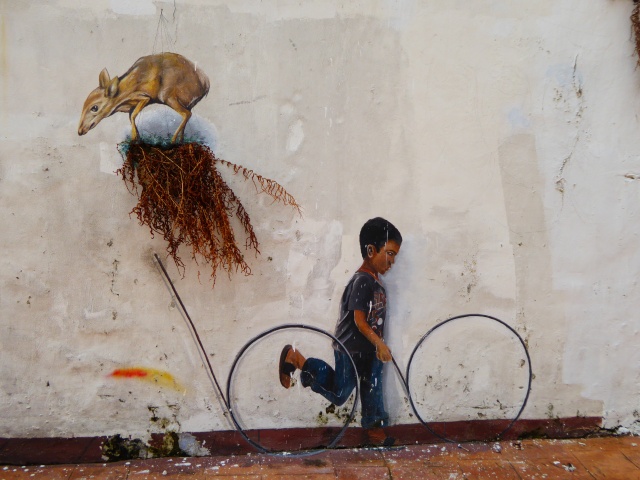 We loved the local transportation option (although we never took one).  These bikes are everywhere.  Most of them are covered in Hello Kitty or Pikachu gear, but a few have a super hero theme and a few are decked out in Frozen gear.  And, the bikes blast the loudest music.  If a bunch of them drive by, you probably want to plug your ears.  Plus, they light up at night. 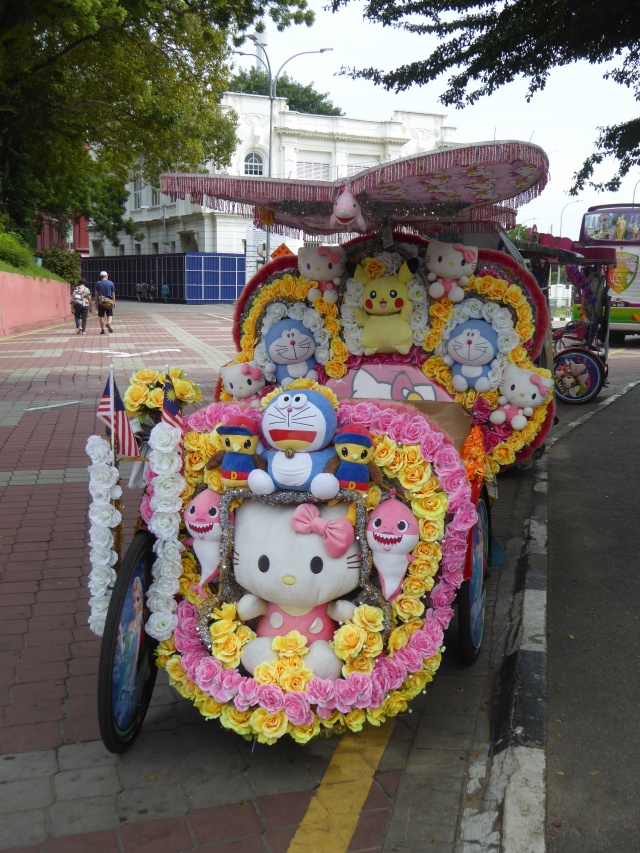 We also saw some temples during our sightseeing.

And some old mansions.  Unfortunately, this one was not open to visitors.

We also ran across this tribute to a former Mr. Universe.

We even went to some museums, which is pretty rare for us.  We were unimpressed with the history and ethnography museum, especially because we affirmatively wanted to understand more about the history of the area and the displays just weren’t very good, although we did learn about traditional Malay weddings in excruciating detail.  (There was quite a bit of obvious bias in the displays, which was unfortunate.)

But the Baba-Nyona Heritage Museum was fantastic.  The Baba are the male descendants of Malay-Chinese couples and the Nyonas are the female descendants.  The museum is in a set of three houses owned by one family and shows how that family lived — we would highly recommended visiting this museum and doing the guided tour.

Plus, we saw these flip-flops during our sightseeing.  I’m guessing they are intended to be highly offensive, as feet are generally considered to be lowly in many Asian cultures. 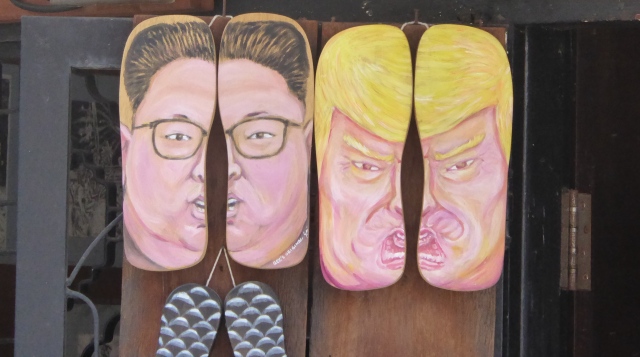 Once the sightseeing was done for the day, it was time to head to a pub on the river for drinks.  Robert was thrilled to learn he could get a gin and tonic for less than the price of a beer.  I was crushed to learn that sometimes a chardonnay is better than a sauvignon blanc.  While sitting in the pub, we watched the river boats ride by and, most days, we got to see a water monitor or two.  One day, we even got to watch a water monitor eat a dead fish.  It was gone in three gulps. 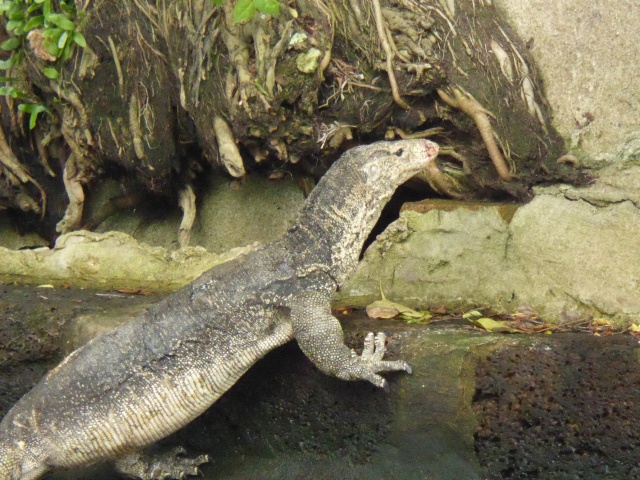 We also had a nice view of an old defensive structure from one of our favorite pubs (Sid’s). 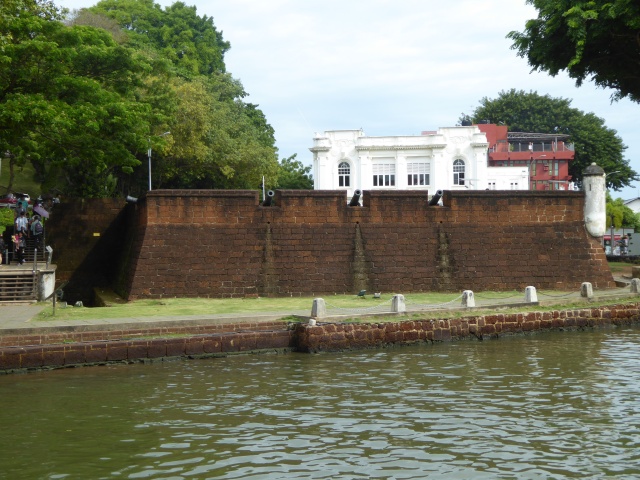 And, we even got to see Jack Sparrow one day.  I swear, really, that is him.

But, the best part of every day was dinner.  The food here is amazing.  One of the Melaka specialties is satay celup and, luckily Capital Satay was right around the corner from our hotel.  This is basically a meal where you pick your own skewer and boil it in peanut satay sauce.  Most skewers cost about 27 cents, but things like tiger shrimp are more.  Messy, but delicious.  The waitstaff brings out peanuts and spices and makes satay sauce at your table.  Then, as it gets used up in the cooking process, they come around with pre-made sauce and fill up your container.  We aren’t even going to think about whether the pre-made satay sauce is reused leftovers or not…. 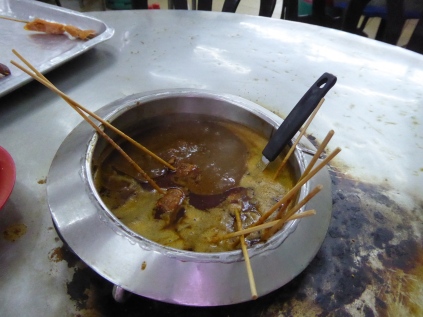 Another of our favorite dinner spots was Pak Putra Tandoori and Nan.  This place only opens for dinner.  They set up tables in a parking lot and serve the best tandoori chicken and the fluffiest nan we have ever had.  Yum!

And, on Friday and Saturday nights, Jonker Street turns into a night market.  You know Robert was in heaven.  There were quail eggs with different toppings, like sausages and crab stick. 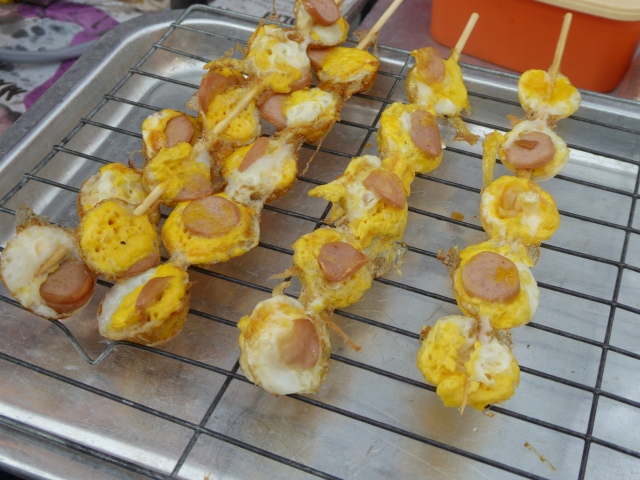 And, little omelet sandwiches with various fillings like octopus. 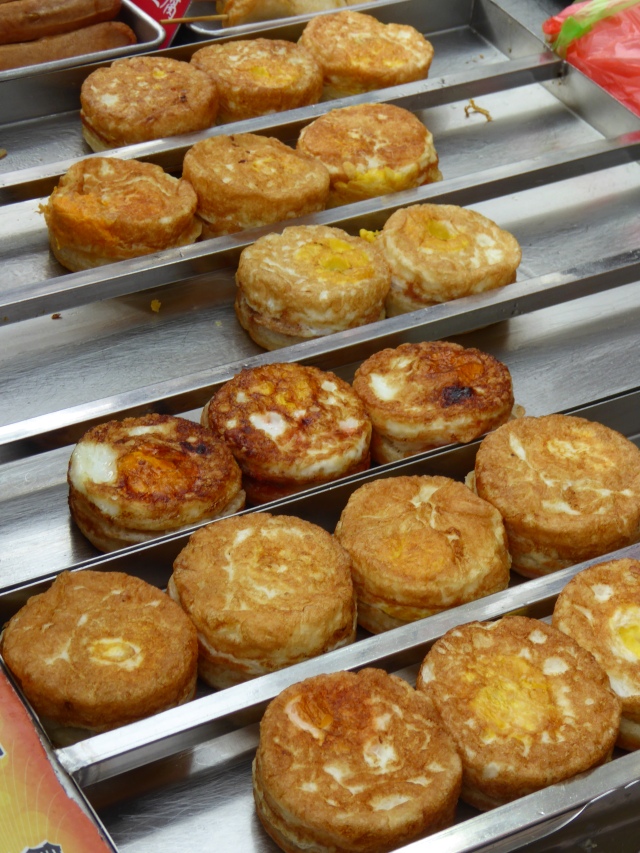 And grilled oysters and scallops.

I even tried the local dessert, called cendol (pronounced chen doll).  This is a mound of shaved ice (they shave the ice to order) topped with jelly-like noodles flavored with pandan leaf, coconut milk, a palm sugar syrup, and kidney beans.  I have absolutely no idea why anyone thinks kidney beans belong in dessert.  Trust me, they don’t.  I have to say though, the cendol tastes far better than it looks — although I didn’t order it a second time… (I also didn’t order the kind that includes durian because I honestly don’t understand how anyone can enjoy durian.) 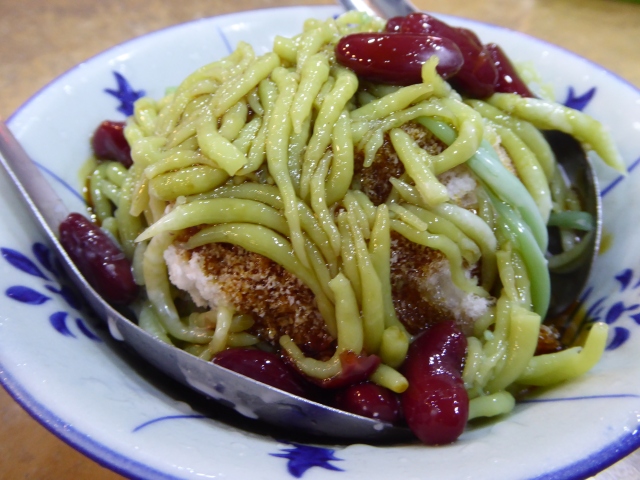 Bottom line, we adored Melaka.  Next stop Kuala Lumpur for just a couple of days.  Fingers crossed we like it better than we did in 2015…

Lisa has a degree in biology and another in law and has spent the last 20 years working as a patent litigator. She is a voracious reader of young adult dystopian fiction and watches far too much bad tv. She loves pretty much anything to do with zombies, and doesn’t think there is anything weird about setting an alarm at 6 am on a weekend to stumble to a pub to watch her beloved Chelsea boys. Robert has had many professions, including a chef, a salesman, an IT guy and most recently, a stay at home dog dad. He speaks Italian and hopes to learn Spanish on this trip. He loves nothing more than a day spent sailing, hopes to do more scuba diving, and rues the day he introduced Lisa to football (i.e., soccer).
View all posts by theschneiduks →
This entry was posted in Malaysia and tagged melaka, street art, street food. Bookmark the permalink.