We have spent the last week in Kuching, which is the capital of Sarawak in the Borneo region of Malaysia.  Kuching is situated right on the Sarawak river, which divides the town into North and South.  There are even city halls on both sides of the river.  Back in the early 1800’s, Kuching was part of Brunei.  However, Brunei ceded control to an Englishman named James Brooks back in 1941 after he helped crush a rebellion.  According to a museum we visited, James Brooks was the owner of a “private gunship.”  I’m pretty sure that means he was a pirate, right?  Anyway… the Brooks family ruled Kuching until 1942 when it was invaded by the Japanese.  After the war, it became ruled by England and then became part of Malaysia in 1963.  Suffice it to say, Kuching has quite an interesting history and, as a result, some interesting old buildings, like this old prison. 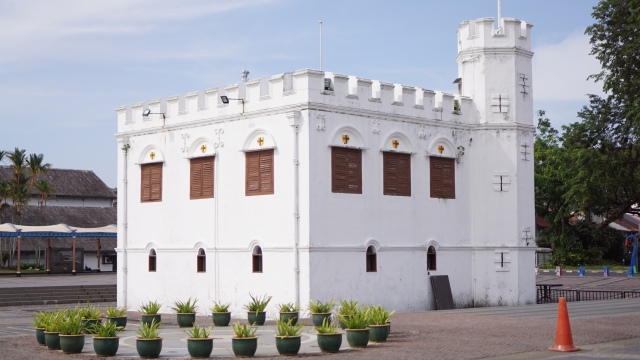 Kuching means “cat” in Malay, and the city is crazy for cats.  There are cat statues scattered around town, some of which border on creepy. 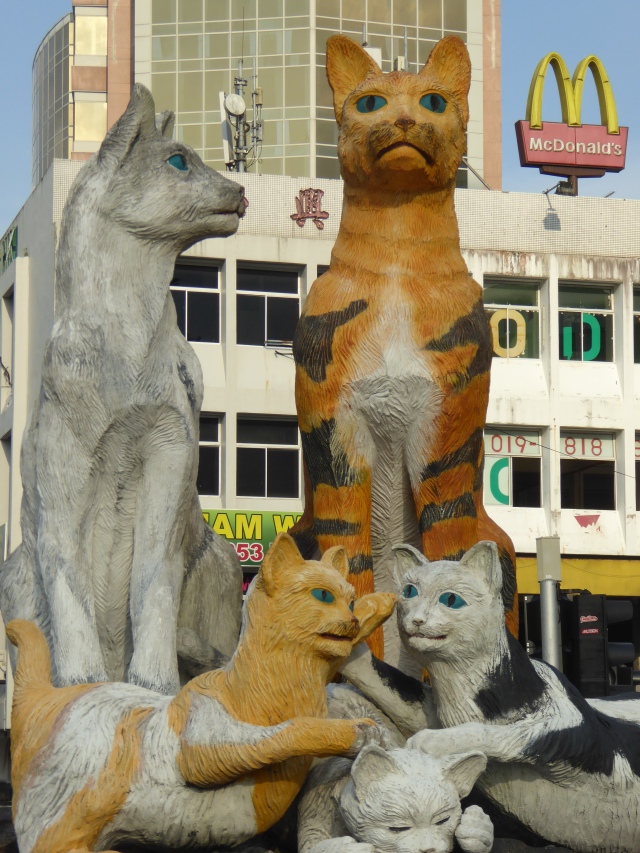 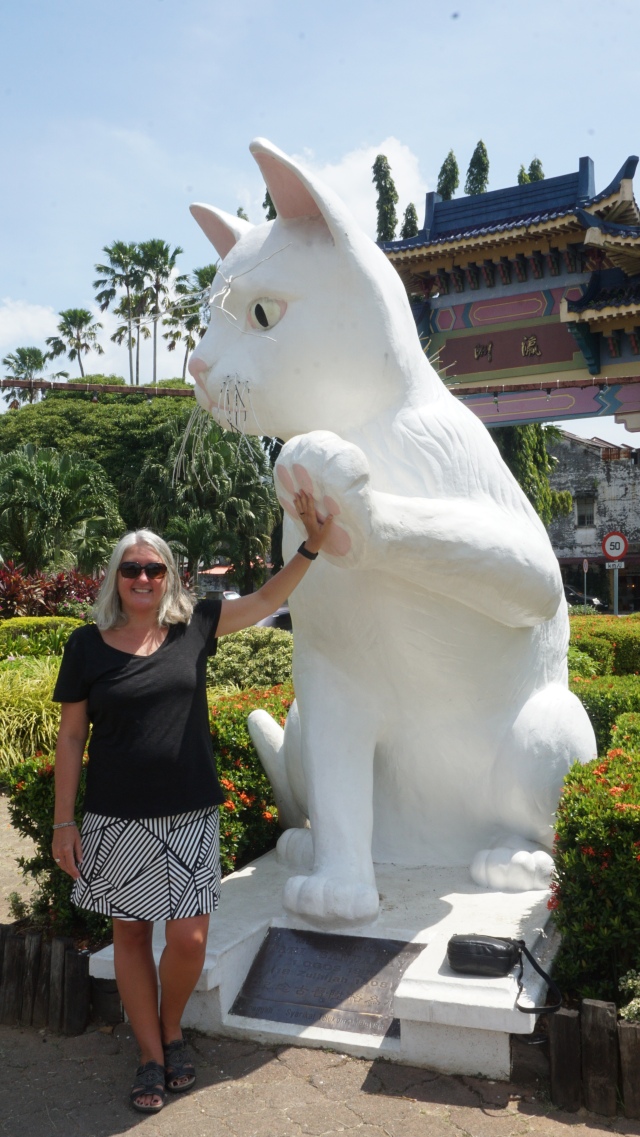 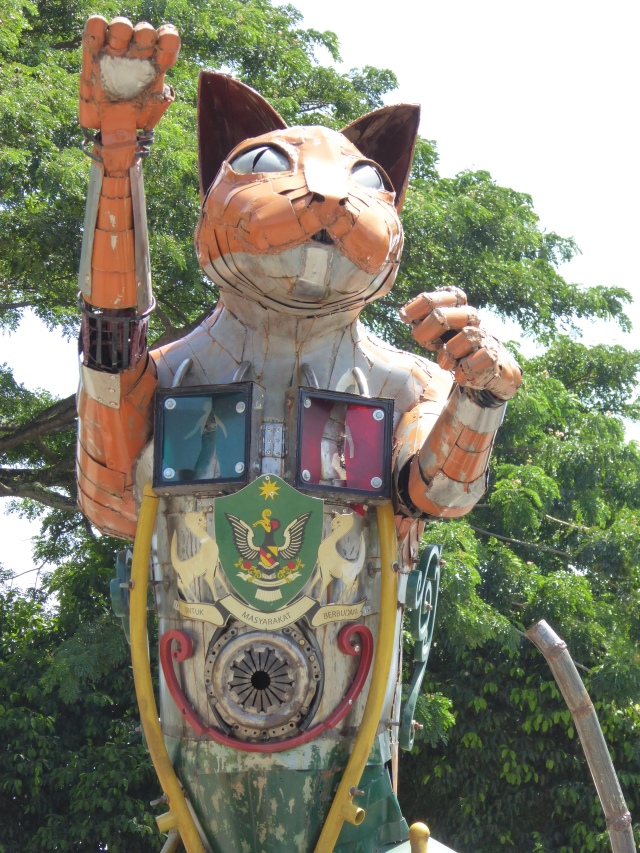 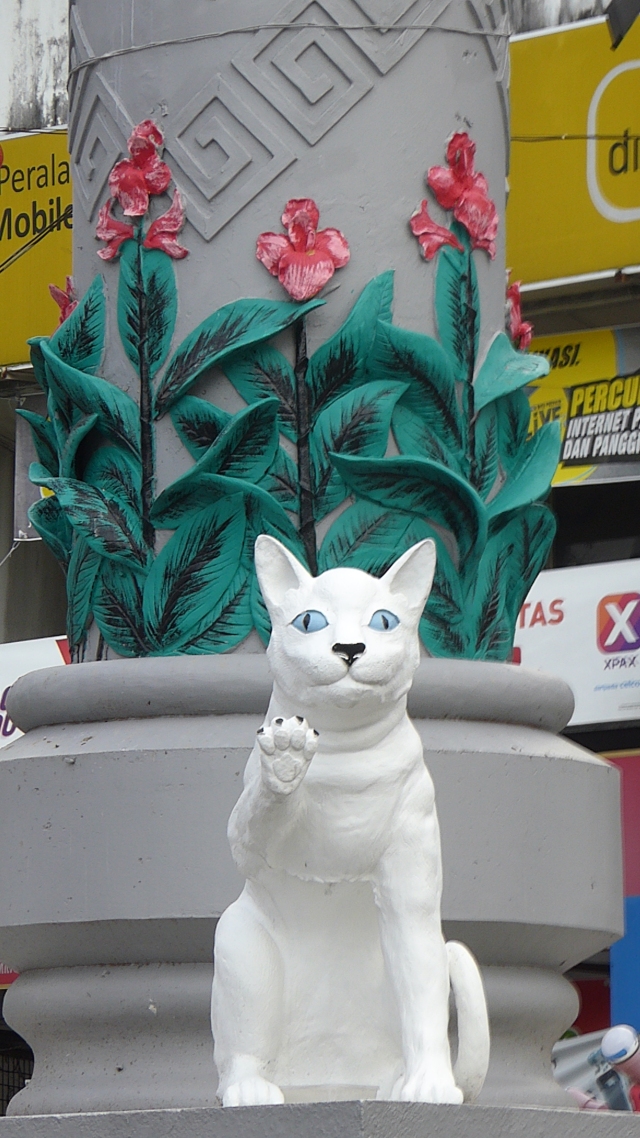 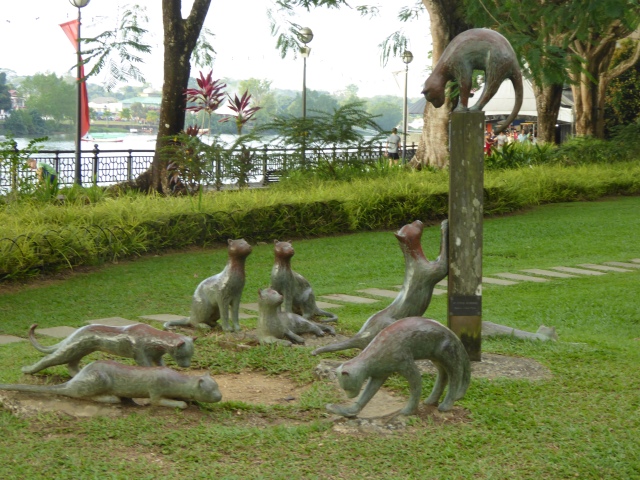 There are real cats lounging around (although not as many as you might think). 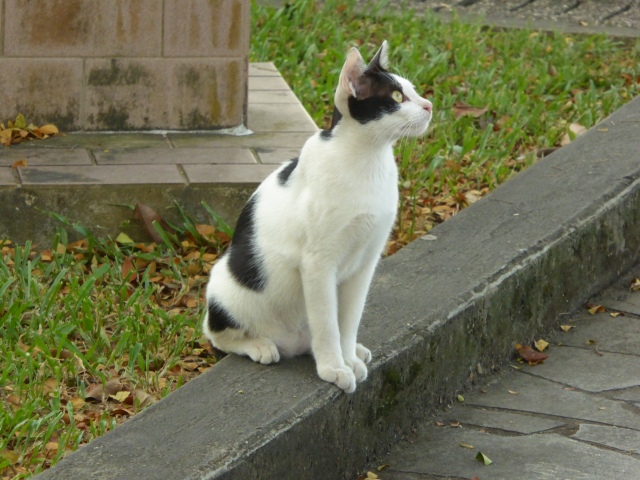 And, if you look closely, there are even cats on the sewer covers. 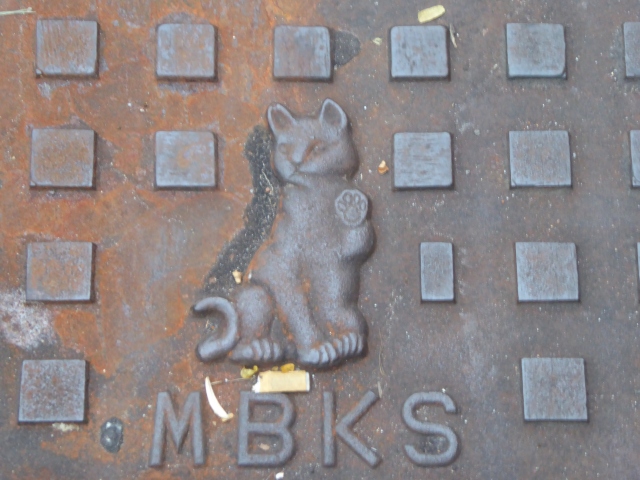 In addition to the cat statues, there are also quite a few interesting pieces of street art scattered around town (some of which also involves cats). 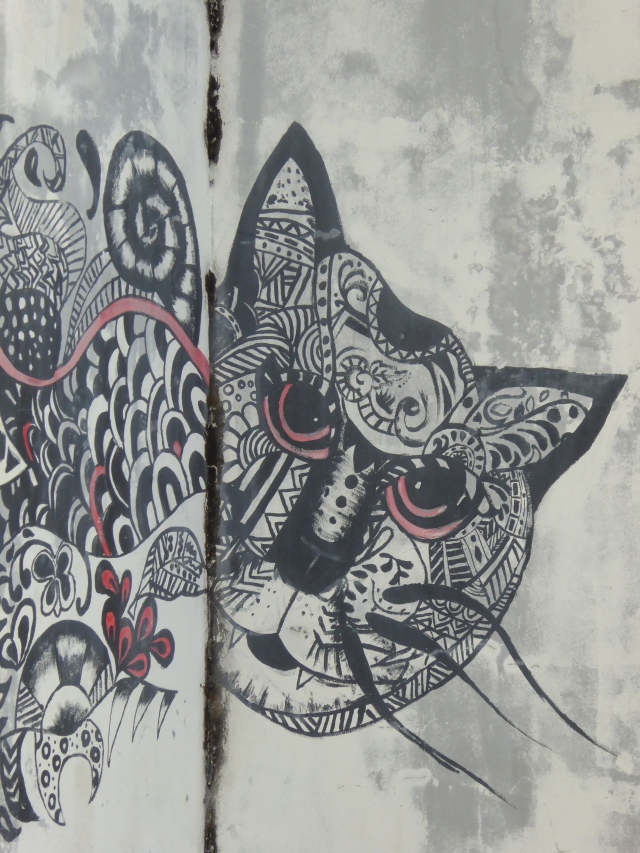 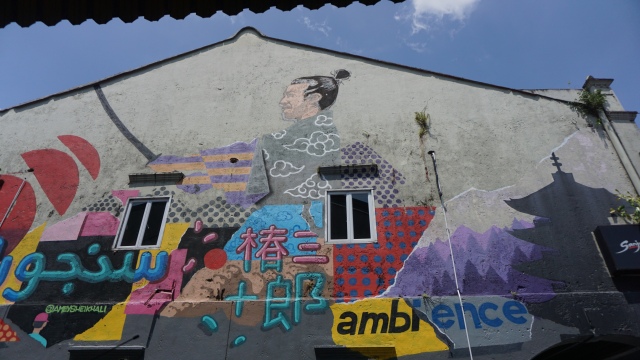 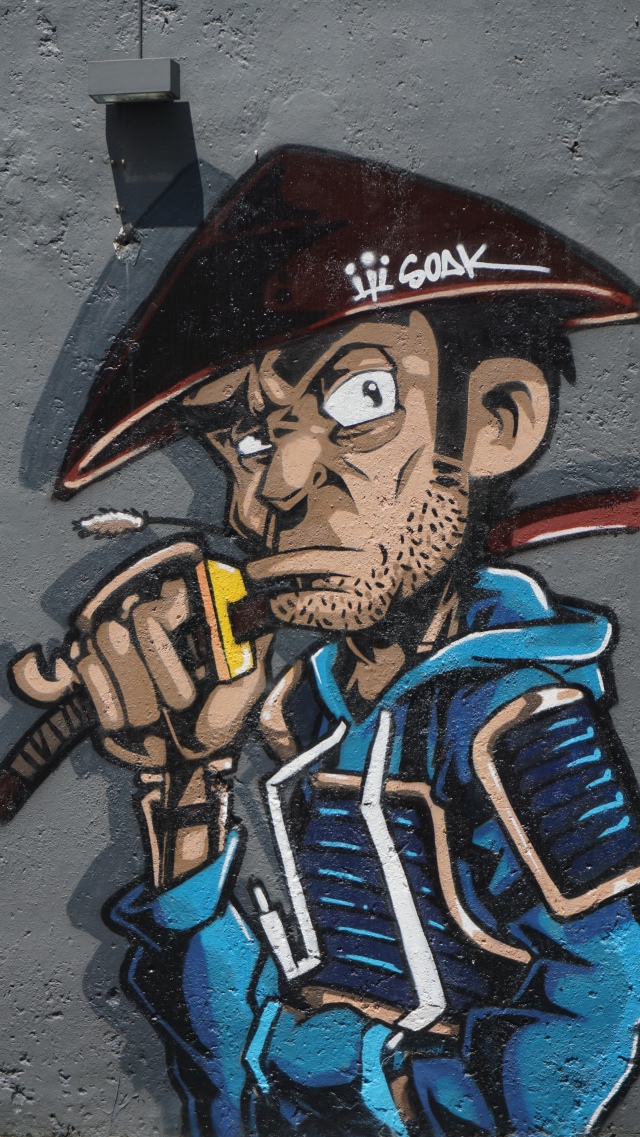 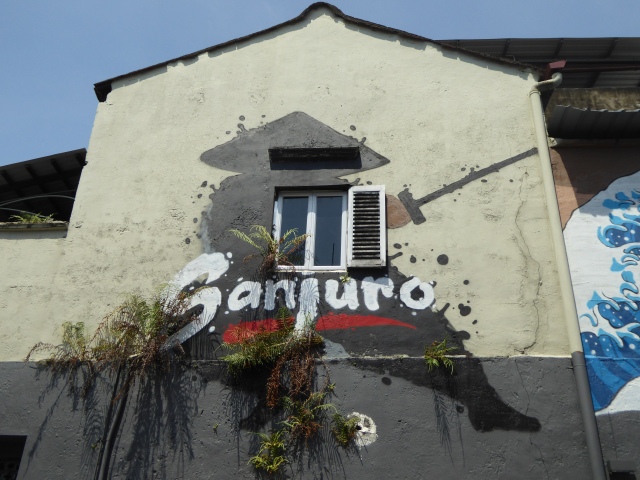 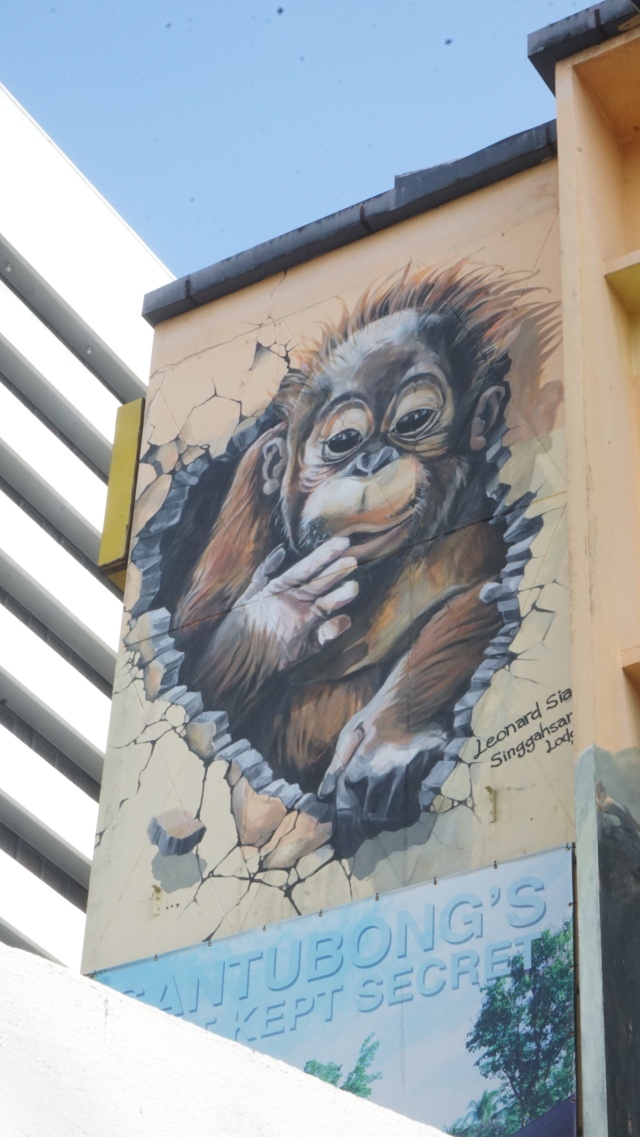 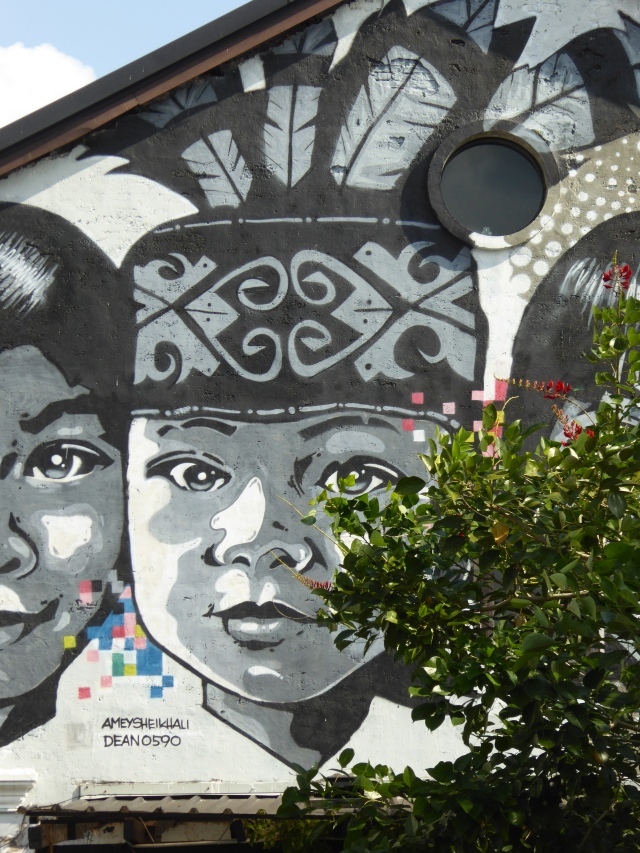 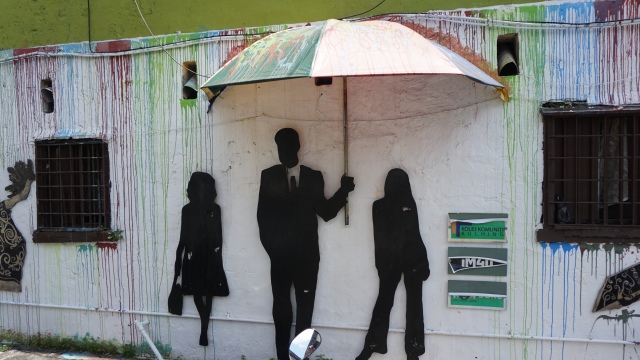 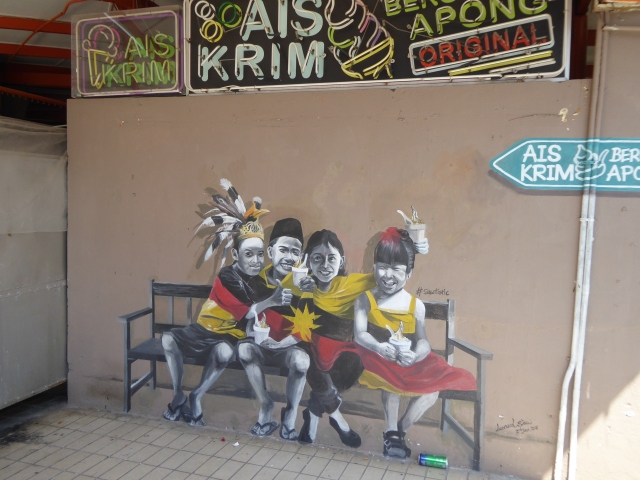 It is a great city for just walking around.  But, fair warning, you are going to want to do your walking early in the day because it gets very, very hot.  We looked at a weather app one day and it said it was 94 but “felt like 107”!  Suffice it to say we quickly learned to spend our afternoons in air conditioning.

We particularly enjoyed walking along the river.  In the evenings, vendors set up shop and sell soft drinks and food.  Small little boats will ferry you across the river for about 25 cents.  And, there is a brand new pedestrian bridge that crosses the river.  It is so new it doesn’t even show up on google maps yet. 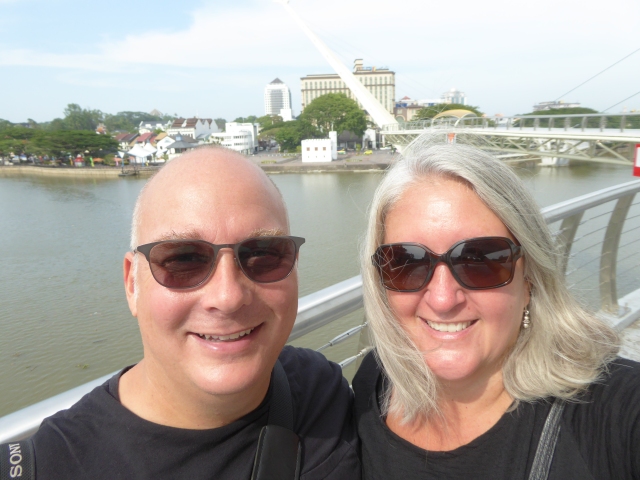 Across the river is the old fort, with a great museum explaining the history of Kuching.  Kind of weird to see that gaudy gold building (the Senate, as we understand it), right next to the fort, right? 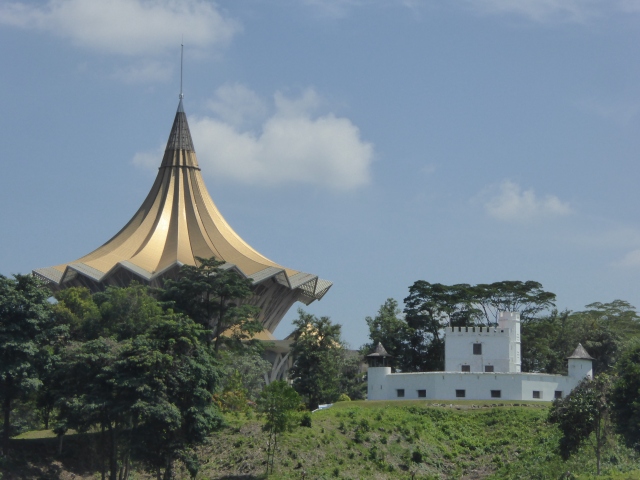 Across the river is also a pretty interesting (and free) orchid garden with some amazing orchids (and lots of mosquitoes). 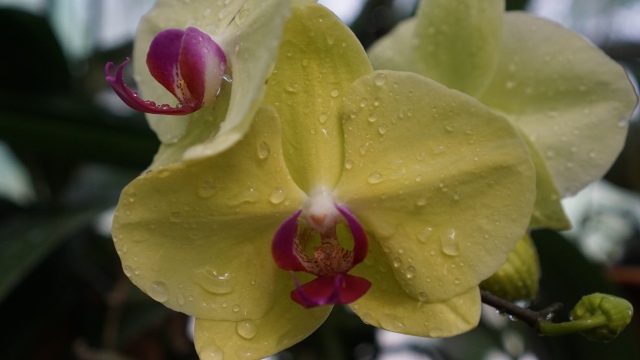 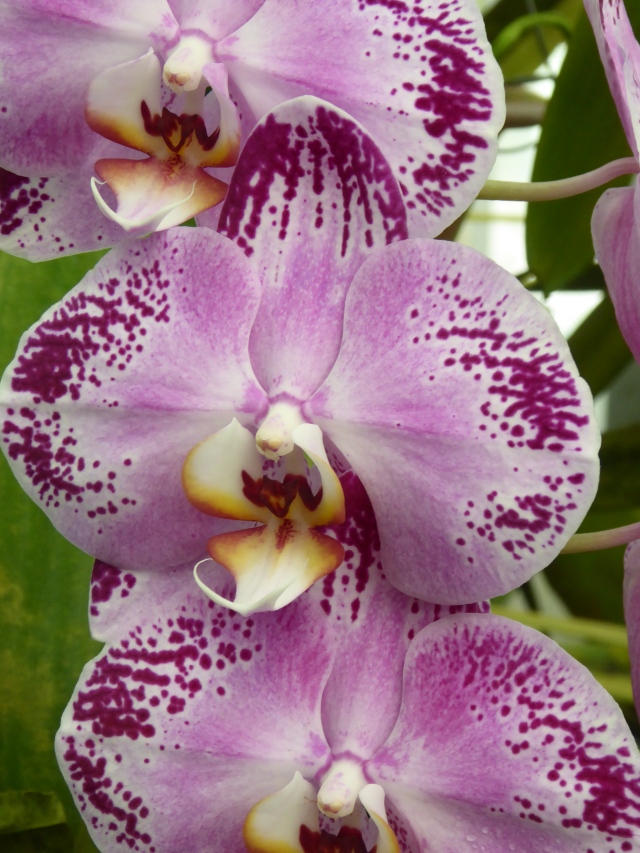 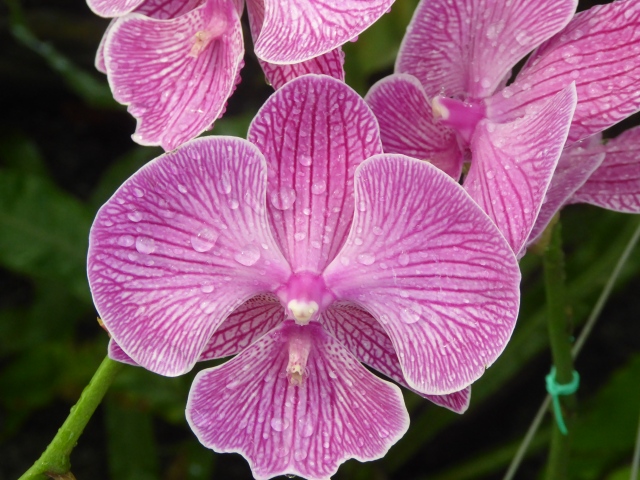 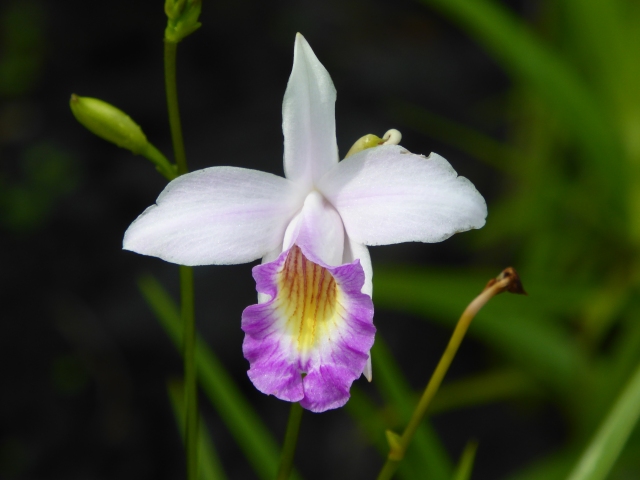 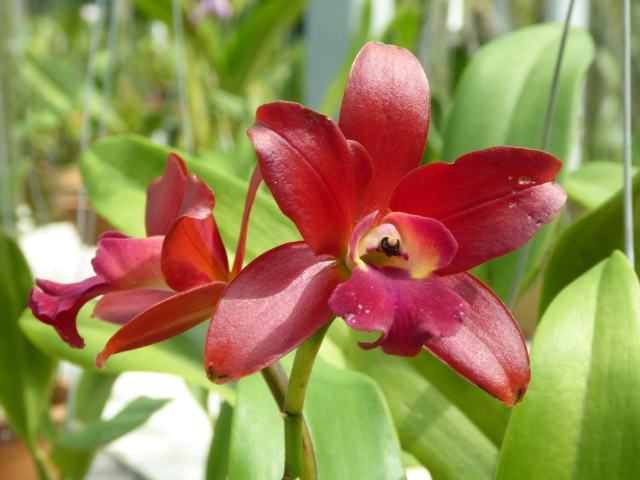 Kuching is culturally very diverse, with the majority of the people being either Malay or Chinese, but there are also various other ethnic groups, including the Iban, who are descendants of actual head hunters.  There are Chinese, Buddhist and Hindu temples scattered around town, along with multiple mosques. 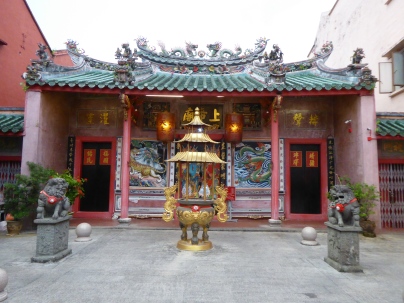 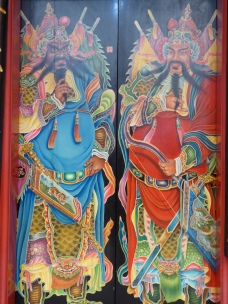 But, the absolute best thing about Kuching is the food.  We have had dinner multiple nights at a place called Top Spot.  It is the top floor of a parking garage and it comes alive every night with various vendors selling seafood.  You pick your vendor, pick your seafood (multiple types of fish, crabs, shrimps, clams, snails, oysters, etc.) and how you want it cooked, pick your vegetables and how you want them cooked, and ask for anything else you might want  that happens to be on their menu (e.g., lemon chicken).  Then, sit down, order some rice and drinks, and wait for an amazing meal. 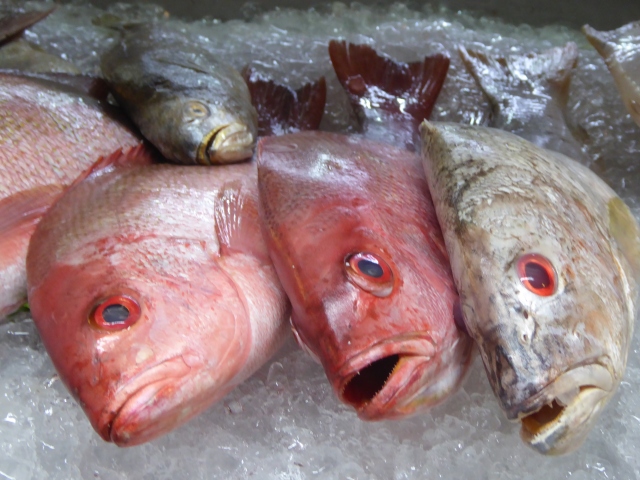 We ate here 4 nights!  And, it was dirt cheap.  One night, we got half of a red snapper (grilled), 300 grams of prawns (grilled), pea pods fried with garlic, rice, a big beer, and water and it came to under $20.  Another night we had the famous Sarawak vegetable called midin.  It is a fern (kind of looks like a fiddlehead) and it is cooked with garlic and shrimp paste.  Delicious!  We also tried something called an oyster omelet.  It was huge!  I ate around the oysters, but the crispy bits were fantastic. 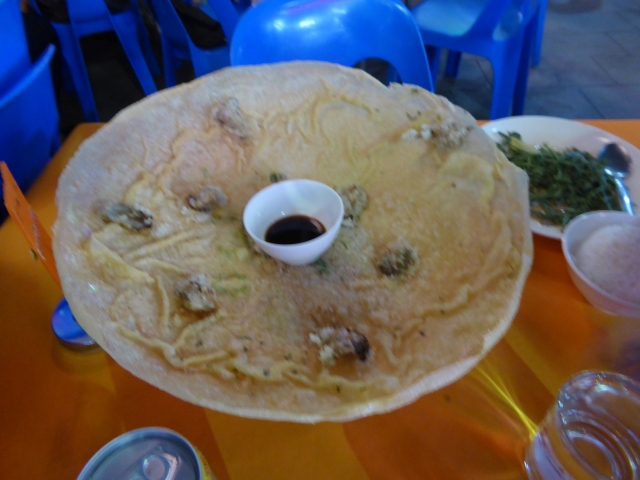 Other restaurants were equally good (and even cheaper).  We loved a cute little place called Chinese BBQ Specialist.  A bowl of kolo mee (a pork noodle dish) for under $1?  Yes please.  And a plate of pork rice was only $1.50.  And don’t get Robert started about the Sarawak Laksa (noodle soup with shrimp) available around town.

Kuching is also known for its kek lapis, which is basically a layer cake on steroids.  The cakes have very thin layers and come in all sorts of colors and flavors.  We tried two (Oreo and chocolate/vanilla).  Sadly, I have to say we weren’t overly impressed — it was good, but not outrageously good.  But, cake is cake, right?

I’m guessing we will be back sooner rather than later….

Lisa has a degree in biology and another in law and has spent the last 20 years working as a patent litigator. She is a voracious reader of young adult dystopian fiction and watches far too much bad tv. She loves pretty much anything to do with zombies, and doesn’t think there is anything weird about setting an alarm at 6 am on a weekend to stumble to a pub to watch her beloved Chelsea boys. Robert has had many professions, including a chef, a salesman, an IT guy and most recently, a stay at home dog dad. He speaks Italian and hopes to learn Spanish on this trip. He loves nothing more than a day spent sailing, hopes to do more scuba diving, and rues the day he introduced Lisa to football (i.e., soccer).
View all posts by theschneiduks →
This entry was posted in Malaysia and tagged kuching, nature photography, street art, street food. Bookmark the permalink.