When we were planning out our time in Kuching, everything we read said we absolutely had to go to Bako National Park.  Seriously, people raved about it so much we were kicking ourselves for not getting our act together and booking an overnight stay.  We were actually talking about returning to Kuching in the future so we could overnight in Bako.  (As a side note, we are loving Kuching so much we are seriously considering coming back and renting an apartment here for a month some day).

Now that we have been to Bako, though, we have just one thing to say.  `We. Don’t. Get. It.  Seriously.  We don’t understand the love.

Now, don’t get us wrong.  The area is beautiful. 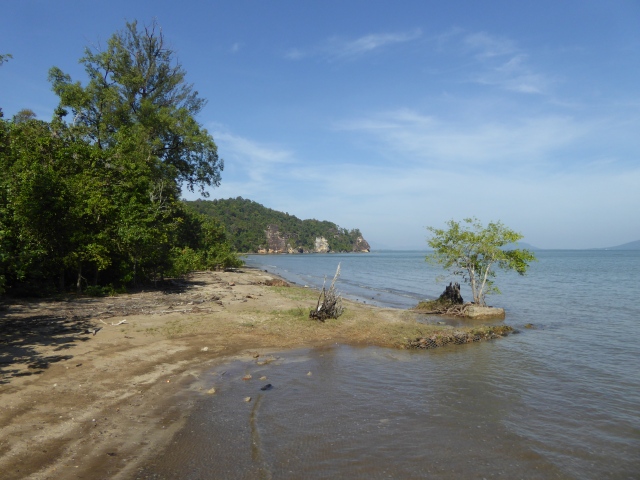 You can see jungle and mangroves and beaches (and maybe even more than that).  There was no swimming while we visited though, as saltwater crocodiles had been spotted in the area.

You can see some cool animals, like this bearded pig.  Apparently, people often see several of these pigs, which are supposedly quite curious, but we only spotted this one and, even then, just for a few seconds. 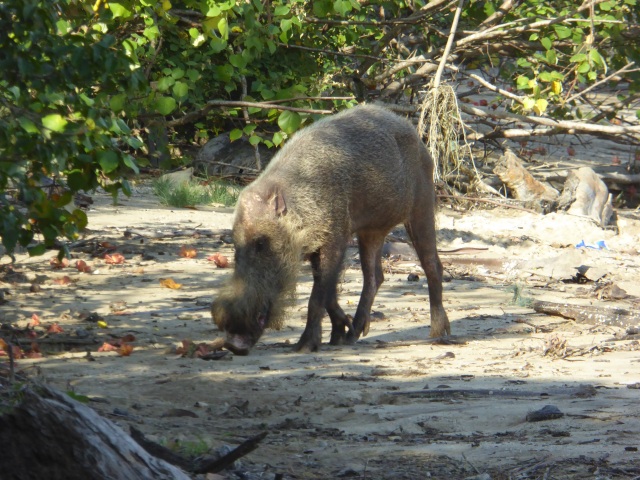 You can see other cool animals like this mud skipper.  These are fish that can live out of the water.  And they can literally skip across the water.  I saw one do it and it was very cool.  (And, do you see the little snail next to the mud skipper?) 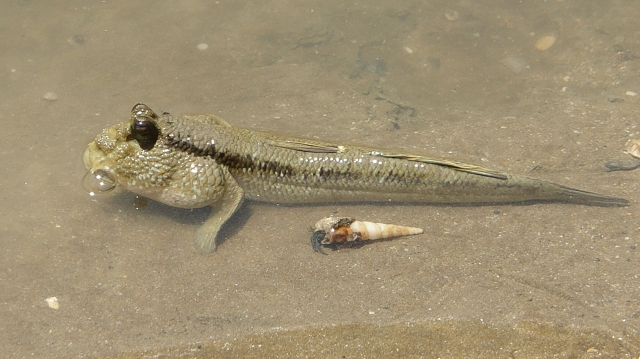 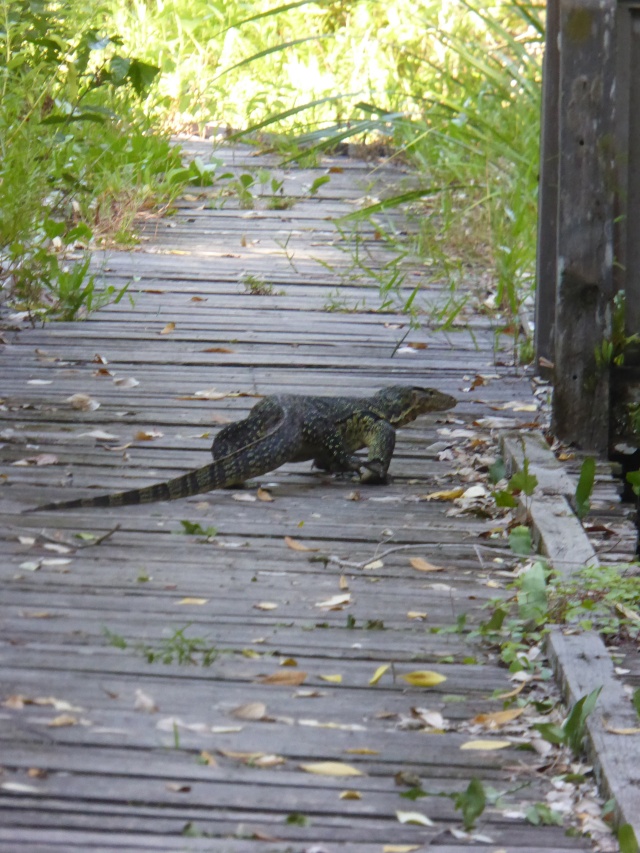 You can also see bright blue crabs (we missed those) and snakes and flying lemurs (we saw one but it was nearly indistinguishable from the tree bark so couldn’t get a photo) and numerous other critters.

There are, of course, macaque monkeys.  One (not any of these guys) even tried to block our path in the hopes of getting food.  Thankfully, some guides came along and scared it out of the way. 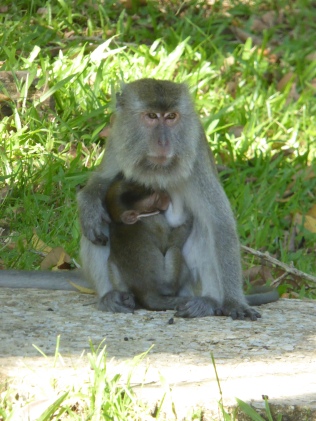 And, you might even be able to see a lizard eating a snack. 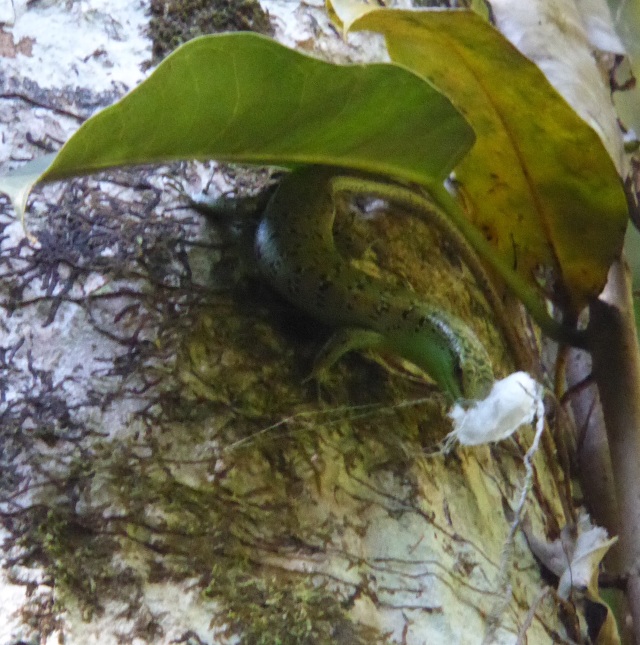 What Bako is really known for is its proboscis monkeys.  You know, those monkeys with the long, phallic looking nose.  And that is what we were there to see.  And, I guess you can say we saw a couple.  If you count seeing something from so far away that we could barely tell they were monkeys.  But guides in the area swore what we saw were proboscis monkeys so I guess we have to put them on our “seen” list.

So, the wildlife is pretty cool.

But, can I tell you something?  The trails are really, really difficult.  Don’t look at the picture of the water monitor and see that nice wooden walkway and think that is what the trails are like.  That is only a very small portion of the trails.  And, even then, the boards are broken — Robert nearly died when he stepped on a loose board that turned into a teeter-tooter.  Good thing for his cat-like reflexes, which kept him from falling on his ass!  Instead, the majority of the trails (at least the ones we tried) are dirt with lots of very steep (albeit short) ups and downs and the trails are covered with tree roots.  Literally crisscrossed with roots.  Trying to figure out where to put our feet around all of those roots was a challenge and my foot got stuck more than once.  (It didn’t help that we weren’t wearing hiking shoes — although we weren’t wearing flip-flops either — because we had been warned we might have to wade to shore.)  And, after reading about the snakes that are in the park (thankfully, we didn’t see any until the very end of the day), I was afraid to grab onto anything other than Robert for support.  I’m honestly surprised I didn’t break an ankle.  And, it was brutally hot.  Like stepping into a sauna fully clothed hot.  And, the available food was really, really grim.  And, we should have hired a guide because the guides wouldn’t help anyone who hadn’t paid them spot anything.  And, the trails were really packed with lots of loud hikers who didn’t seem to understand that talking is not conducive to wildlife spotting.  And, getting there and back was far more difficult than we had been led to believe.  (How come none of the websites that said the bus runs every hour told us there was no bus at 1:30????  How come our boat driver didn’t tell us he would pick us up from the beach, instead of from the pier where he dropped us off).

Bottom line, we are glad we went.  If nothing else, it was a weight loss opportunity because I’m pretty sure we both lost about 10 pounds of water weight from the amount of sweat we produced.  And we don’t have to worry about high blood pressure because we are probably both salt deficient at this point.  But, we are no longer in a mad rush to go back.

Lisa has a degree in biology and another in law and has spent the last 20 years working as a patent litigator. She is a voracious reader of young adult dystopian fiction and watches far too much bad tv. She loves pretty much anything to do with zombies, and doesn’t think there is anything weird about setting an alarm at 6 am on a weekend to stumble to a pub to watch her beloved Chelsea boys. Robert has had many professions, including a chef, a salesman, an IT guy and most recently, a stay at home dog dad. He speaks Italian and hopes to learn Spanish on this trip. He loves nothing more than a day spent sailing, hopes to do more scuba diving, and rues the day he introduced Lisa to football (i.e., soccer).
View all posts by theschneiduks →
This entry was posted in Malaysia and tagged kuching, nature photography. Bookmark the permalink.