A little bit of Jurassic world

Robert and I have made our way to the island of Flores and the town of Labuan Bajo.  The town is pretty sleepy — one main road lined with dive shops and a few restaurants.  We came here with two goals:  Robert really wanted to dive, and I really, really wanted to see the Komodo dragons.  (These are most likely the goals of 99.99% of the tourists who come here.)  Well, check and check.

Prior to arriving in Flores, we had booked a trip with a local dive shop.  Robert would get to dive twice, I would snorkel while he dove, and then we would visit Rinca island together to see the dragons.  A perfect plan for a perfect first day in town.

Bright and early, we jumped on a boat and headed to sea.  The water was all different shades of blue, the clouds were beautiful, and we were surrounded by islands.  Plus, the boat served really good bread as part of the breakfast offerings.  (Sure, laugh about my need for good bread.  Then spend some time in Asia.  You will understand….)  It was looking to be an amazing day.

And, in fact, Robert had one spectacular dive (and one pretty good dive).  Check out this amazing video of a manta ray.  Robert was hanging onto a rope when we he took this because the current was so strong it would have flung him away otherwise.  The manta ray, on the other hand, was basically standing in place without any effort whatsoever.

My snorkeling experience?  Well, let’s just say it has put me off snorkeling a little bit.  I’m not a confident swimmer in the first place.  Add in a guide that laughed when I asked for a life jacket, didn’t even notice when I had a full-on panic attack and started hyper-ventilating in the water, failed to point out half the sea life, and nearly kicked me multiple times when he dove to take pictures of things.  And, then add in currents so strong at the second stop that I nearly got swept under the boat.  Let’s just say I didn’t care how expensive wine was in Flores, I was downing some after that experience!  I did at least get to see a manta ray and two turtles, plus a variety of other fish, although the water was pretty murky so the view wasn’t great.  (For those of you who have heard the snorkeling is amazing here in Labuan Bajo, based on my limited experience, I would disagree.  I’ve snorkeled in far better locations, with better coral and more fish, including Thailand and Belize.  Perhaps I’m jaded, as others seemed to have had a great experience.)

After the water activities, it was back on the boat to the island of Rinca.  There are two main islands here to see the dragons:  Rinca and Komodo.  Rinca is the closer of the two.  As we pulled in, there were a couple of monkeys playing on the pier.  And, as we walked towards the welcome center on the island, we got our first glimpse of a Komodo dragon as it ambled right across our path.  Cool!

As we waited for our ranger (provided by the park, not by the dive shop), a mud-covered water buffalo strolled by.

We also saw several deer hanging out in the yard and under a deck.  Sadly, one of them (not this one) was dying from a dragon bite. 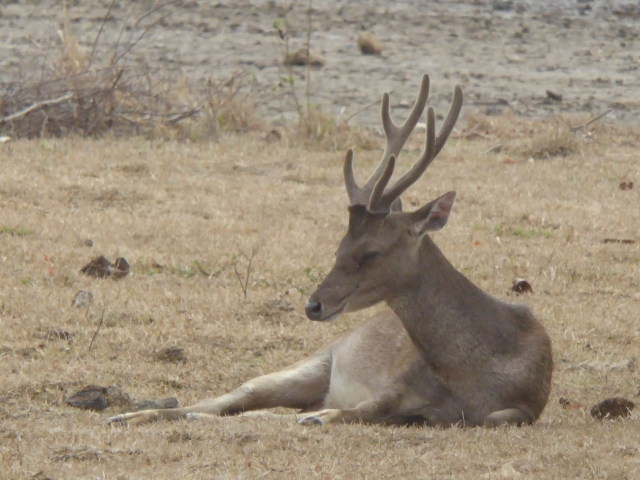 Then, it was off to look for more dragons.  Our ranger said there were two rules:  stay together and don’t talk.  The ranger talked nearly the entire walk.  And, the group got separated almost immediately.  (I wish I was exaggerating, but I’m not.)  So much for safety.  But, we did get to see dragons. This guy is downright adorable.

There were several hanging out by the ranger camp.  Our ranger said they hang there because they smell food.   Look at the claws!

After passing by the ranger camp, we went to an area they call the nest.  Guess what these two had just finished doing?  No, thankfully, we didn’t witness the act itself.

Yes, that wet noodle in front is the female dragon.  The mating process can last several days and involve multiple “sessions”  — she looked completely spent so I’m hoping these two were completely done.  She will lay about 30 eggs in a couple of months.  When the babies hatch, they will run up a tree so mom doesn’t eat them.

This looks like a very self-satisfied smirk to me.  But, perhaps he has reason to be satisfied — we were told the males outnumber the females two-to-one on Rinca so they have to fight for the opportunity to mate.  Apparently, the fighting looks a bit like sumo wrestling but gets pretty violent.

I will say, Rinca was a bit of a disappointment.  We got to see about 7 different dragons and that was really, really cool.  But the whole thing felt a bit zoo-like and it seemed odd to me how many animals were hanging out at the camp.  One has to wonder if the animals are fed to keep them close to keep the tourists happy.  The ranger said no, but ….  And, given how lax the ranger was with security, it makes me wonder even more. 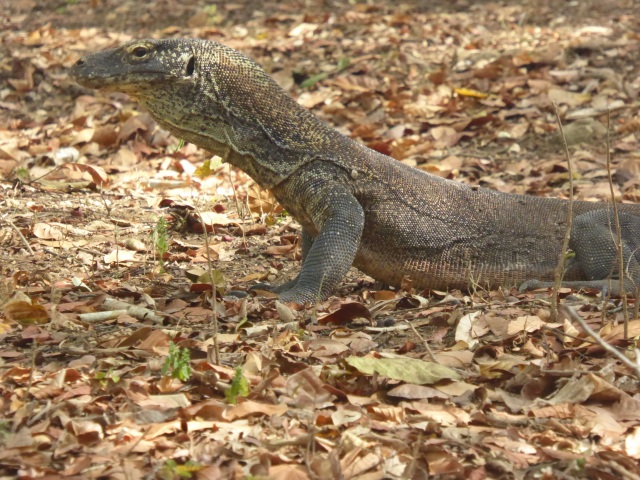 As our day trip wound down, Robert booked a second dive and we made plans to go see Komodo Island and some of the other islands around Labuan Bajo.  And, then, disaster struck.  The dreaded Bali Belly!  So we spent the rest of our trip hanging out at our hotel pool and cafe, which ultimately turned into a very relaxing couple of days (at least when we weren’t reading about and getting stressed out about the insanity going on back home).  Now that we are both feeling better, I think we would both like to return and do a short live-aboard trip to see more of the area.

(And, I just have to say before the match tonight, Go Iceland!)

Lisa has a degree in biology and another in law and has spent the last 20 years working as a patent litigator. She is a voracious reader of young adult dystopian fiction and watches far too much bad tv. She loves pretty much anything to do with zombies, and doesn’t think there is anything weird about setting an alarm at 6 am on a weekend to stumble to a pub to watch her beloved Chelsea boys. Robert has had many professions, including a chef, a salesman, an IT guy and most recently, a stay at home dog dad. He speaks Italian and hopes to learn Spanish on this trip. He loves nothing more than a day spent sailing, hopes to do more scuba diving, and rues the day he introduced Lisa to football (i.e., soccer).
View all posts by theschneiduks →
This entry was posted in Indonesia and tagged nature photography, underwater photography. Bookmark the permalink.

1 Response to A little bit of Jurassic world