A bad time to be a pig in Bali

After doing nothing but sitting on our butts sunbathing for the last week, we decided it was time to book a tour and actually do something.  So, we booked a driver to take us on a 10 hour tour of Bali.  Drivers here are pretty cheap — we paid about $45 dollars and that included the car, gas, and all parking fees.  And, quite honestly, we may very well have been able to get a car for even cheaper if we had felt like haggling with a stranger on the street.  The tour itself largely involved us sitting on our butts in a car so we didn’t really succeed in getting much in the way of exercise.  But, we did get to see a few sights.

First up was Taman Ayun temple, originally built in 1634 and used as a royal temple.  This is a large temple located in a park about an hour drive from where we are staying.  Everyone must wear a sarong to cover their knees.  We were given bright green ones to wear over our other clothes.  It was not an attractive look!  But, the temple was beautiful.  Tourists are not allowed inside the temple itself and can only walk around a stone fence outside the temple.  The upside to that is we never had to worry about people in our photos.  The cat-like thing below is a “Barong” and represents goodness as best I can tell.  For certain ceremonies, two people get inside the Barong and dance (like you would see at Chinese New Year celebrations). 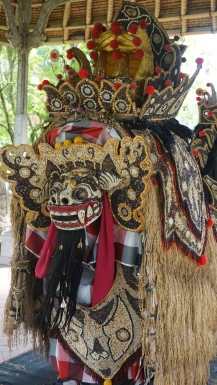 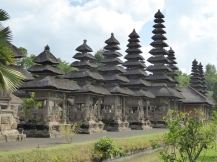 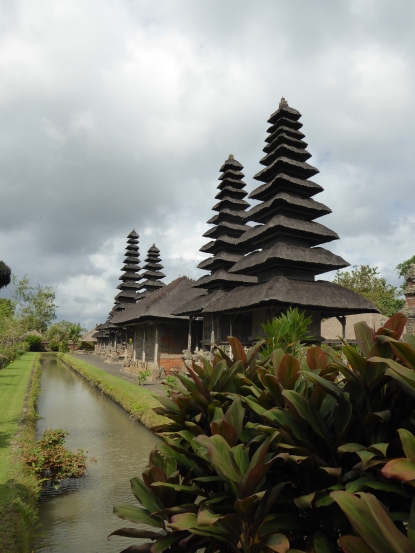 Interestingly, there is a cock fighting ring on the temple grounds.  Thankfully, it was unoccupied on our visit (and we didn’t even walk over to see it).  Our guide explained that the cock fighting was traditionally used to obtain blood to give to the Gods (but he admitted it is now all about gambling).

From there it was a long drive to the Munduk waterfall.  The waterfall is about a 15 minute walk down a steep trail from the parking area.  The waterfall was powerful and lovely, and pictures just don’t do it justice.  The real problem, however, is that what goes down, must later come up, and the slog back up to the road was brutal after doing absolutely nothing for an entire week! 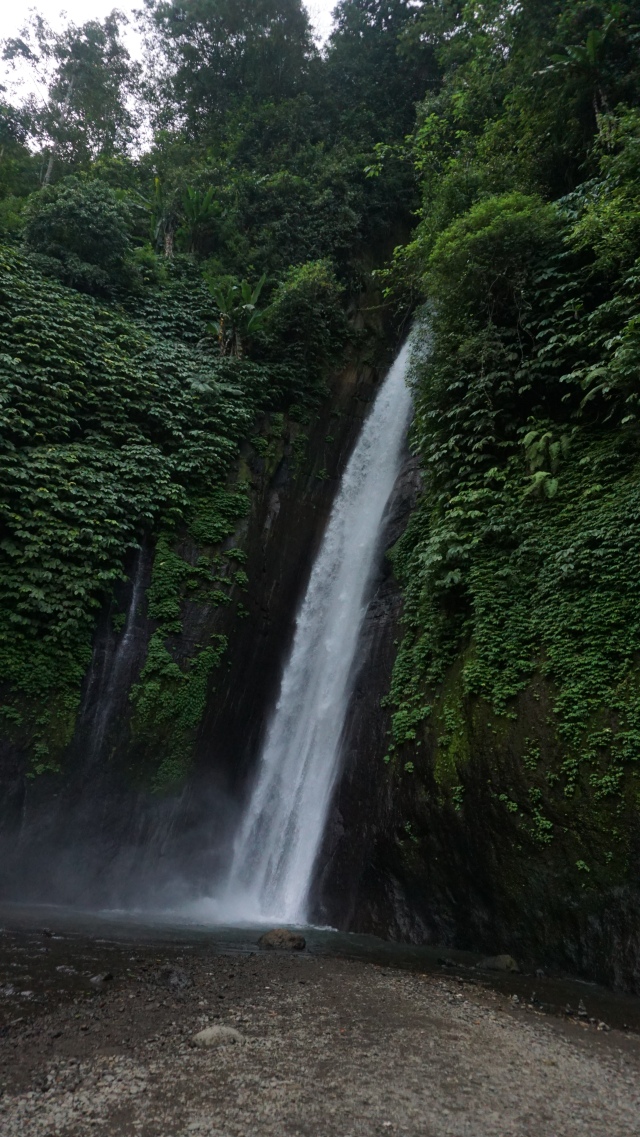 Next stop was a view of twin lakes.  A man was there offering to let us take photos with a very large fruit bat (they actually call them flying foxes here).  I’m seriously regretting our decision to decline that offer (even if fruit bats do carry the nipah virus….).  How cool would it be to have a picture holding a large bat? 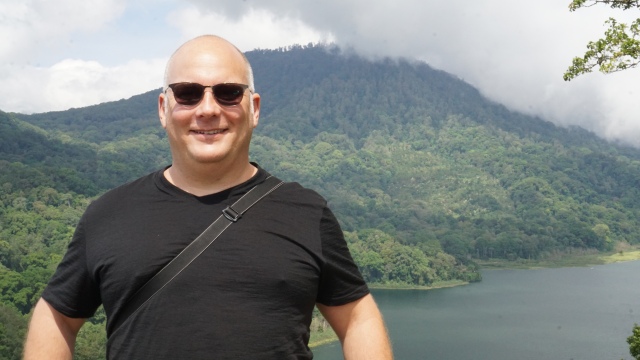 From there, we went to the Ulan Danu temple, a temple built back in the 17th century.  This was high on Robert’s wish list of things to see, and it did not disappoint.  This temple is postcard perfect and, in fact, is seen on lots of advertisements for Bali.  The temple itself is in the lake and not accessible.  Oddly, no sarongs were required here.  Unfortunately, it was cloudy and foggy when we visited, so the photos are not the best. 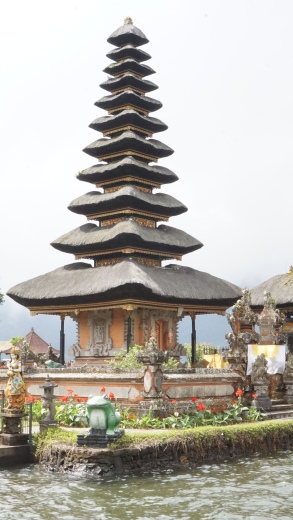 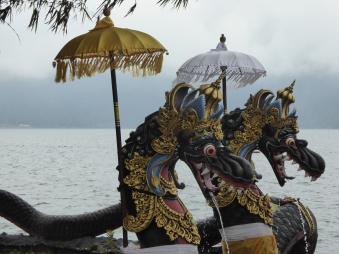 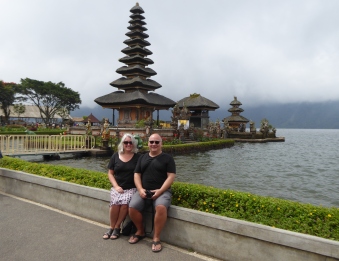 Then, it was back in the car for a trip to the Jatiluwih rice terraces.  This was my favorite stop of the day.  The rice terraces are a UNESCO world heritage site and absolutely beautiful.  If the rice looks a bit odd to you, that is because — according to our driver — it is sticky rice.  Mmmmmm….sticky rice! 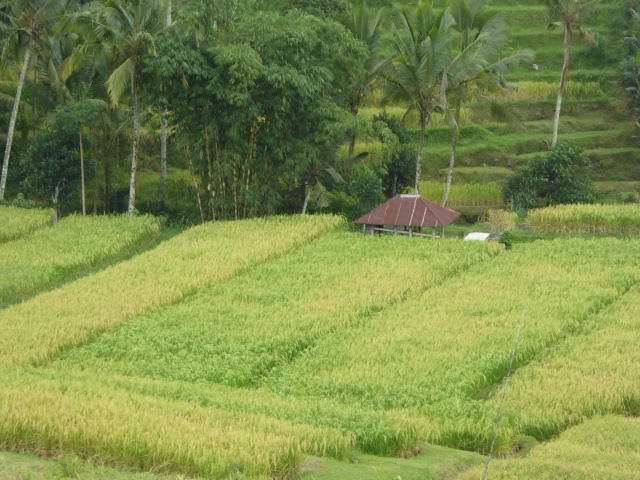 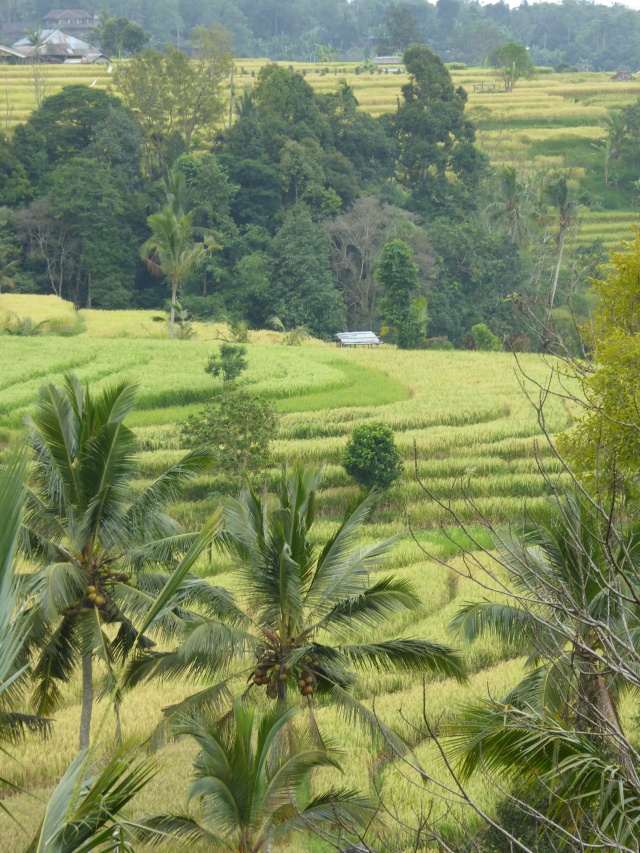 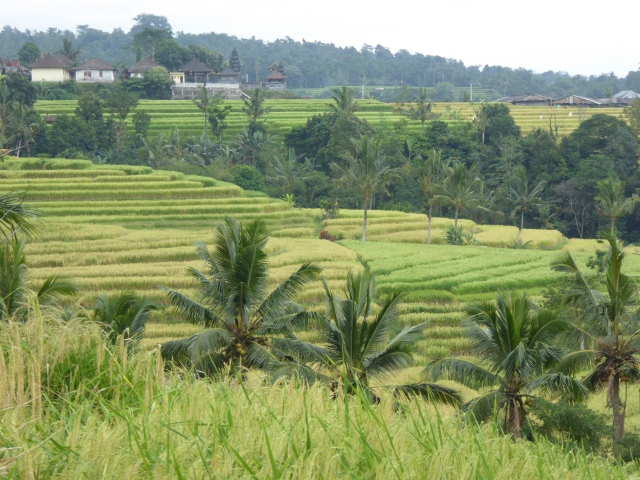 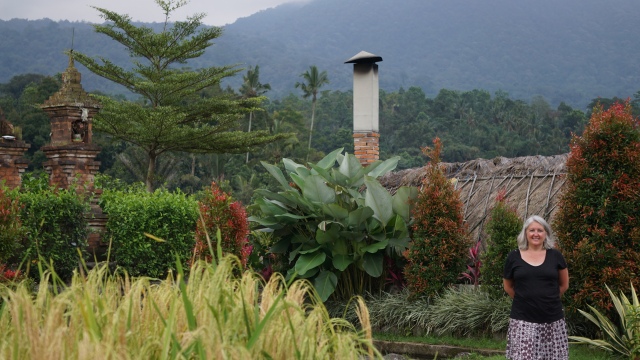 Our last stop was a coffee plantation, where they make coffee from beans pooped out by a local cat-like animal (a civet).  We didn’t particularly want to stop here due to concerns about animal cruelty, but it was part of the tour.  We should have just said no.  This particular plantation CLAIMS they harvest the beans the old fashioned way, which means the civets are wild and they look for their poop on the grounds of the coffee plantation.  They CLAIM that the reason the coffee is so good is that the civets pick only the best berries to eat which is why the civets have to be left wild.  That said, many of these plantations use factory farming methods where the civets are kept in small cages and force fed the coffee berries.  The bottom line is that, although Robert tried the coffee, we did not purchase any because (1) he likes regular coffee better and (2) we couldn’t be assured of the source of the beans.

Now, at this point, I’m sure you are wondering where the pigs come into the story.  Well, it turns out Tuesday and Wednesday are big holidays in Bali.  (We’ve had very mixed explanations of what the holidays are about so aren’t even going to hazard a guess).  Out in the countryside, pretty much every home and temple has these sorts of decorations up. 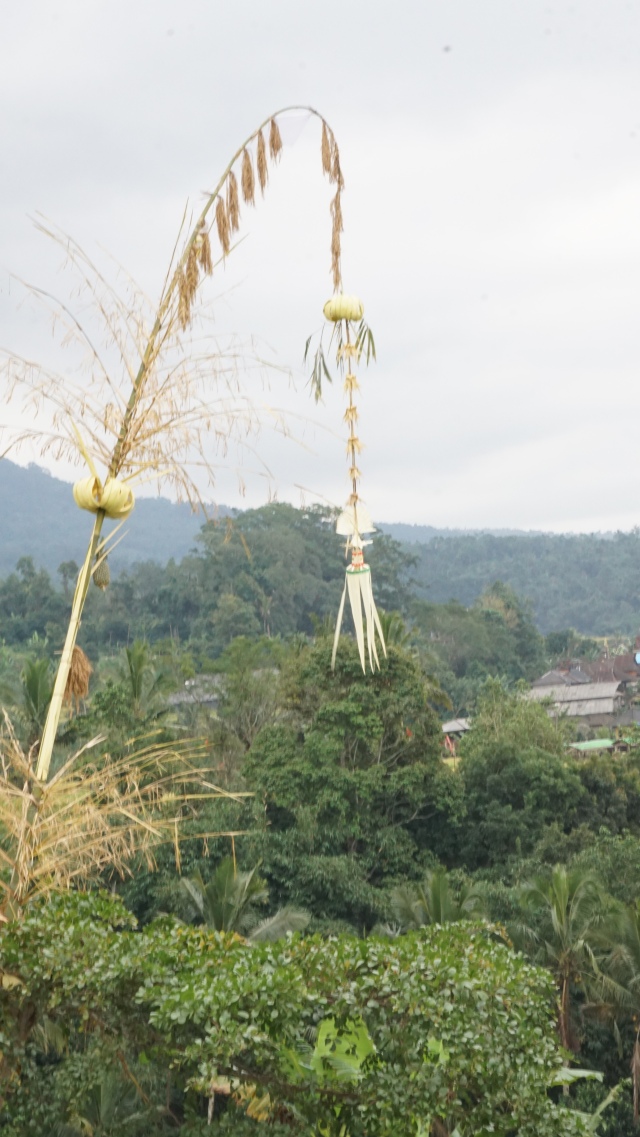 But, there are also pigs being slaughtered to eat during the holiday celebrations.  And the pigs get killed, gutted, and cut up right on the side of the road.  So, it is a very bad time to be a pig in Bali.  But apparently a very good time to be a Balinese person!

Lisa has a degree in biology and another in law and has spent the last 20 years working as a patent litigator. She is a voracious reader of young adult dystopian fiction and watches far too much bad tv. She loves pretty much anything to do with zombies, and doesn’t think there is anything weird about setting an alarm at 6 am on a weekend to stumble to a pub to watch her beloved Chelsea boys. Robert has had many professions, including a chef, a salesman, an IT guy and most recently, a stay at home dog dad. He speaks Italian and hopes to learn Spanish on this trip. He loves nothing more than a day spent sailing, hopes to do more scuba diving, and rues the day he introduced Lisa to football (i.e., soccer).
View all posts by theschneiduks →
This entry was posted in Indonesia and tagged bali, holidays, unesco world heritage site. Bookmark the permalink.