Even further off the beaten track.

So…when the concierge has never even heard of the temple you plan to visit, you know you must be doing something right.  (And, the fact that she later expressed surprise that we visited the temple independently just sealed the deal).

But I’m getting ahead of myself.  Yesterday, we were looking for something new to see and we stumbled upon an article about a temple called Wat Pariwat.  This temple became known because there is apparently a carving of David Beckham in one of the alters.  (For those of you who don’t follow real football, Becks is a famous footballer and he is married to Posh Spice.  Posh Spice is…oh, never mind…).

The temple is accessible via a form of public transportation we hadn’t previously taken — the rapid transit bus.  So, we were in.

On first glance, the temple appears fairly similar — albeit a bit more ornate — to the many other temples we had seen.

The outside of Wat Pariwat (from the back)

And, like other temples, there were images of Buddha inside.

But, when we looked a little bit closer, this temple was unlike any we had seen before.

Wait a second….Is that Popeye?

And is that an oddly busty Mickey?

And I’m really not sure what is going on with these bunnies or why one has its own selfie stick. 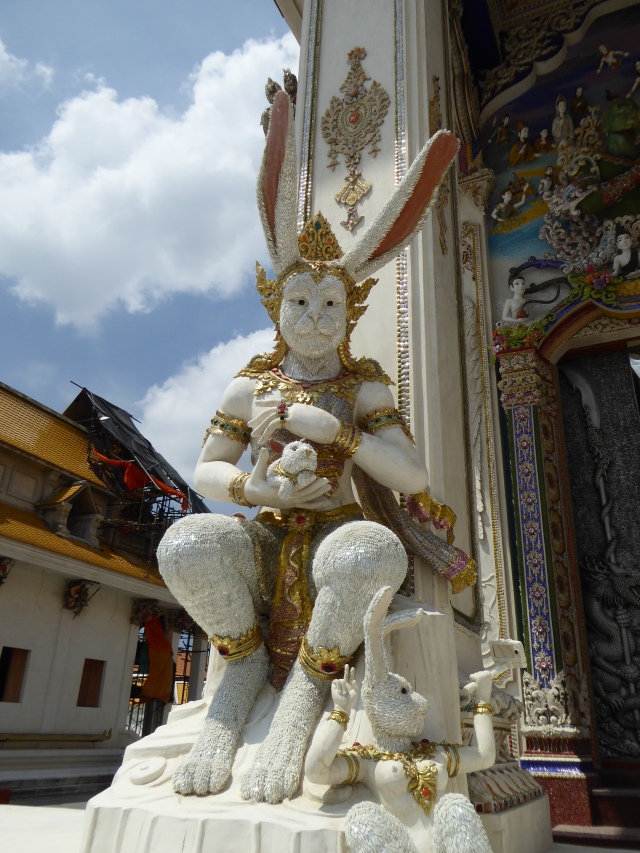 Or why this punk rock girl with a mohawk is sawing off someone’s hand.

Or who this guy is.

The bottom line is that Wat Pariwat was stunning.  There were intricate details everywhere and we’ve only included a small fraction of the interesting sculptures.  That said, we never saw Becks (other blogs have mentioned he is in a locked building).  Oh well.

We highly recommend a quick visit to Wat Pariwat.  Just get yourself to the Chong Nonsi Skytrain stop, follow the signs to the BRT terminal, buy a ticket, hop on the bus (it came ever 15 minutes or so and cost 15 Baht when we visited), and ride to the Wat Pariwat stop (which is stop number 7).  Other than a small group of Chinese tourists with a guide, we were the only ones visiting on a Tuesday morning.  Fair warning…it is excruciatingly hot at the temple.  We would have spent even longer there if we weren’t dripping with sweat after the first five minutes.  So bring plenty of water.

Lisa has a degree in biology and another in law and has spent the last 20 years working as a patent litigator. She is a voracious reader of young adult dystopian fiction and watches far too much bad tv. She loves pretty much anything to do with zombies, and doesn’t think there is anything weird about setting an alarm at 6 am on a weekend to stumble to a pub to watch her beloved Chelsea boys. Robert has had many professions, including a chef, a salesman, an IT guy and most recently, a stay at home dog dad. He speaks Italian and hopes to learn Spanish on this trip. He loves nothing more than a day spent sailing, hopes to do more scuba diving, and rues the day he introduced Lisa to football (i.e., soccer).
View all posts by theschneiduks →
This entry was posted in Thailand and tagged bangkok, off the beaten path. Bookmark the permalink.