Posted on November 22, 2015 by theschneiduks

Tomorrow morning, bright and early, we head on a multi-day trip to Hong Kong, involving layovers in both Chicago and San Francisco.  So…you know what that means…it is time for final thoughts on Colombia:

We LOVE this country.  We were worried before arriving that our approximately one month stay in Colombia would be too long.  It wasn’t.  We would love to have more time to explore this country.  We would love to visit some of the small towns and get out into the countryside.  Colombia is, by far, our favorite country outside of Asia and we can honestly see ourselves living here someday.  I would say everyone should visit Colombia, but I want to keep the beauty of Colombia a secret….

Everyone in Colombia was so nice to us.  People would just randomly walk up to us and say “welcome to Colombia” and give us a big smile.  Nearly everyone let us completely butcher Spanish in our attempts (ok, ok, Robert’s attempts) to learn the language.  Locals who spoke English would sometimes turn and help us when we couldn’t understand the wait staff or the wait staff couldn’t understand us.  We didn’t have a single bad experience with the people of Colombia. 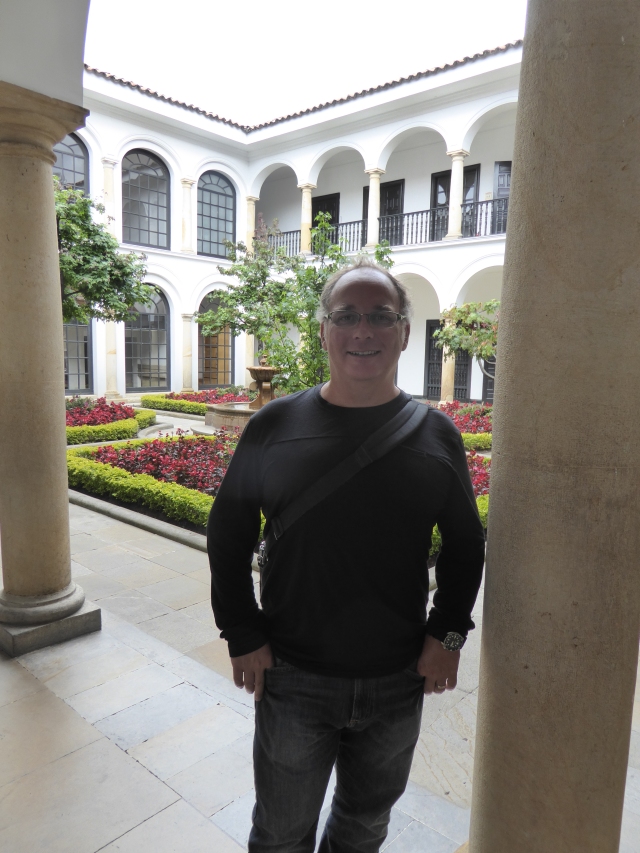 We loved the friendly and happy dogs.  There were dogs everywhere in Bogota.  And they almost universally seemed happy and well-fed.  Even the bomb-sniffing dogs looked friendly.  We have been to so many countries where the plight of the street dogs is just heartbreaking.  Here, that isn’t the case.  I have no idea why.  I don’t know if they cull the street dogs or if people feed the street dogs or what.  (I do know they feed the street cats because we saw a feeder in Cartagena).  But I do know that the dogs here seem happier and healthier than in most other countries.

We loved that nobody, except the taxi drivers in Bogota (who, as I understand it, try to screw everyone), tried to screw us.  (And even the Bogota taxi drivers did so in the most friendly way possible).  In Asia (particularly in Thailand), we were constantly on guard because there are so many ways to scam the tourists.  No so here. (We were warned about counterfeit currency and people who would claim a bill was counterfeit even when it wasn’t.  Thankfully, we didn’t experience that first hand).

Colorful windows outside of Medellin

Colombian food is really, really good.  Don’t get me wrong.  It is heavy on starches and it doesn’t have the flavor profile of Asian food.  But, compared to the food in Central America, Colombian food was heavenly.  The Colombians know how to cook a mean grilled meat that has been properly seasoned.  Their chicken soup is out of this world.  Some of the pastries are nearly, but not quite, as good as those in Paris.  The gelato is as good as the gelato in Italy.  And don’t even get me started on the joy that is limonada de coco (which consists of lime juice, sugar, crushed ice and coconut cream)….Nonetheless, we still ate far too much Italian in Colombia…. 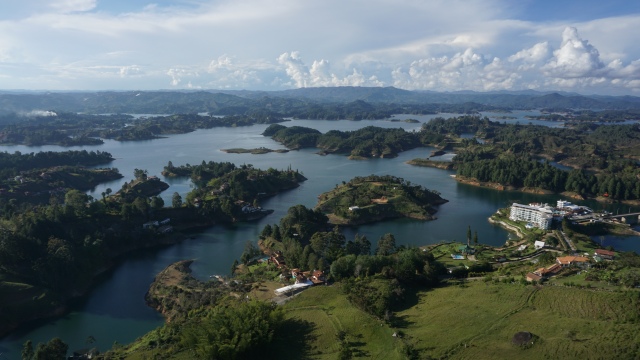 Beautiful scenery outside of Medellin

Oh, and did I mention the popsicles?  How can you not fall in love with a country that has popsicle stores???  Or a country where there are a ton of popsicle flavors, including some made with water, some made with cream, and (yuck) some made with yogurt??  There were even popsicles made of fruits we had never even heard of before.  (Although, oddly, there were no banana popsicles — go figure because there are bananas everywhere here).  And some shops would put chocolate or caramel or other stuff on top of your popsicle.  I also love that we saw far more adults eating popsicles than children eating popsicles.

And did I mention the arequipe?  How can you not love a country that seems to love caramel.  There are arequipe donuts and arequipe popsicles and arequipe olbeas.  And, when we splurged on a Sunday buffet brunch today, there was a big bowl of arequipe and people were taking spoonfuls of it to smear on bread.  (I managed to eat two big spoonfuls….).  Yum.

On the other hand, boy, do they love their Subway sandwiches here.  I have never seen so many Subway sandwich shops.  Seriously?  That is the U.S. export you are going to fall in love with?  I just don’t get it….

Also on the other hand, given it is the end of November, I’m pretty sure the grossest food award will be awarded to Colombia — our first day in Bogota we walked by a ton of vendors selling something that looked like marshmallow taffy.  I have no idea what it is called, but I tried it.  Big mistake.  Turns out it is made with the hoof of a cow.  I might be able to get past that, but the flavor was disgusting — sickly sweet.  Yuck.  Both of us would so rather eat grilled rat or mouse back in Asia before ever eating another spoonful of this stuff…(Don’t, just don’t, talk to me about Jello.  I refuse to think about what is in my Jello….).

One of the strange things about Colombia (and a few other countries) is that nobody busses their own table.  You know how in the U.S. at fast food places everyone is expected to carry their tray to the trash bins and dispose of their trash?  Not so here.  They employ people to bus the tables, even at shopping mall food courts.

Another strange thing about Colombia was opening times.  There was an Irish pub in Cartagena that didn’t even open until 8 pm.  I’m sorry, but you really can’t call yourself an Irish pub if you don’t open until 8 pm — Irish pubs should open at 8 am….Yes, I know, we should have just dealt with it and stayed out until 3 or 4 in the morning like the Colombians apparently do, but we just don’t have that in us anymore….

The one thing we didn’t like about Colombia was how frequently restaurants were out of things.  I can’t even count the number of times a restaurant was out of white wine — it even happened once at a place that advertised itself as a wine bar.  We also found that some places had things that weren’t on the menu.  For example, we once ordered a watermelon mojito at a bar that was out of white wine.  Doesn’t that sound good?  We will never know because the restaurant was out of watermelon.  (I have no idea how that is even possible, as there is watermelon everywhere around here….).  On the other hand, they did offer to make us a strawberry mojito instead.  (We passed on that one).

If you do visit Colombia, make sure the hotel refunds your tax.  Foreigners staying less than a certain amount of days (I think it is 60 but check first) do not have to pay hotel tax.  Given that the tax is 16%, it really adds up if you are here for a few weeks…

We can’t wait to come back to Colombia.  Really.  It is that good.

Lisa has a degree in biology and another in law and has spent the last 20 years working as a patent litigator. She is a voracious reader of young adult dystopian fiction and watches far too much bad tv. She loves pretty much anything to do with zombies, and doesn’t think there is anything weird about setting an alarm at 6 am on a weekend to stumble to a pub to watch her beloved Chelsea boys. Robert has had many professions, including a chef, a salesman, an IT guy and most recently, a stay at home dog dad. He speaks Italian and hopes to learn Spanish on this trip. He loves nothing more than a day spent sailing, hopes to do more scuba diving, and rues the day he introduced Lisa to football (i.e., soccer).
View all posts by theschneiduks →
This entry was posted in Colombia, Final Thoughts and tagged bogota, holidays, street art. Bookmark the permalink.