Posted on November 2, 2015 by theschneiduks

Cartagena has sung to us.  A sweet lullaby or a siren song, enticing us to drop everything and move here.  So much so that we even (briefly) did some research on apartment options around here.  (Short answer:  they are cheap!).  Alas, it is not meant to be.  Tomorrow we depart for new adventures in Medellin.  But here are just a few of the things that have captured our hearts.

The ceviche (this is all Robert but I like it because it makes him so happy — just look at that smile): 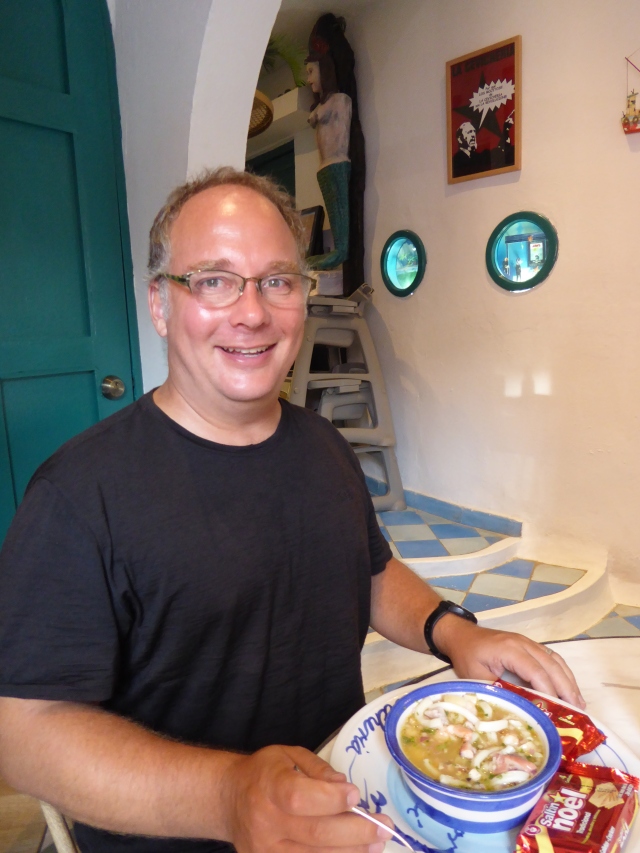 The arepas con huevo served fresh from the deep fryer and so hot they burn our hands (although I admittedly pick around the yolk):

Robert and his street beer

The history surrounding the old castle/fort:

Lisa at the old fort

Robert at the old fort

The fact that parts of the city are ultra modern: 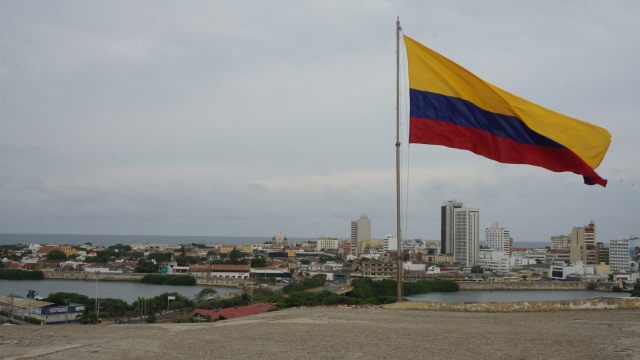 View of the modern city from the fort

The curious birds that hang out around the fishermen, just hoping for a tidbit or two: 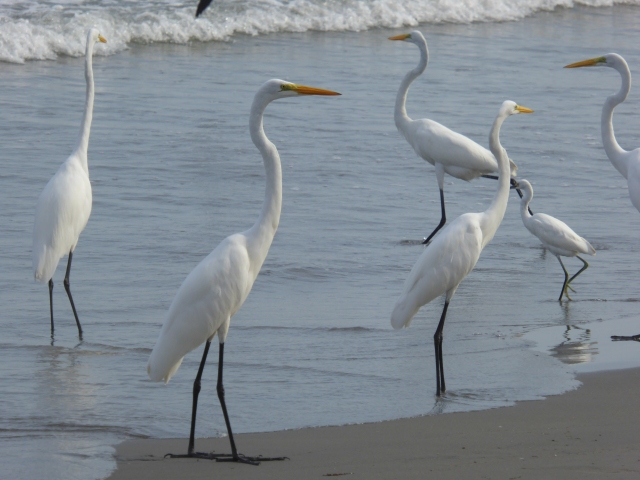 More birds on the beach 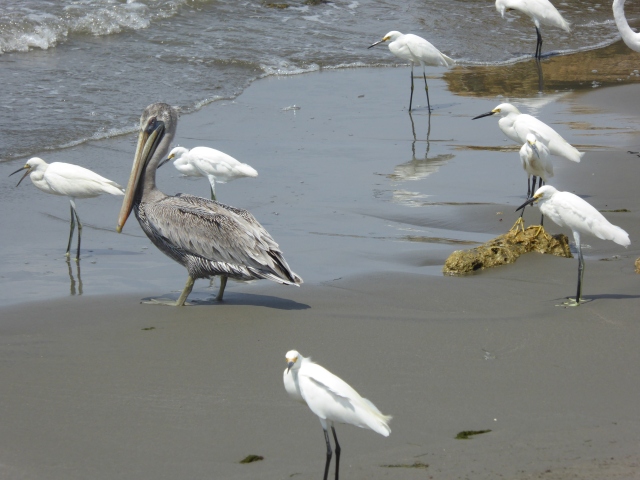 Birds at the beach

The cocktail bar we found last night.  It was the first time Robert has had a fancy cocktail since leaving Chicago (neither mojitos nor gin & tonics count as “fancy” cocktails).  The entire place only had about 15 seats.  And the cocktails were outrageously priced.  But, Robert enjoyed his cocktails and I enjoyed a nice glass of white wine, stored properly and served at the appropriate temperature (yes, that is exceedingly rare here).

At a fancy cocktail bar

And the street art: 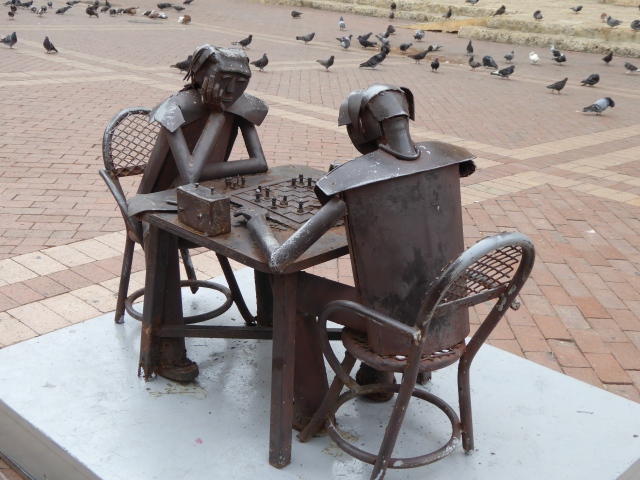 Playing chess with the pigeons 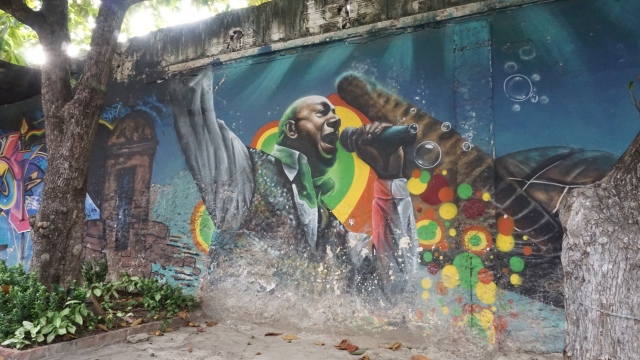 The weird-ass fans that look like they belong on an episode of Dr. Who:

Yep, this is a fan

The rum (again, this is another Robert thing, but boy does it make him happy…):

Robert sipping a rum — this one was called Dictador

The candy row with the super-sweet coconut candies:

Some kind of coconut candy

And, did I mention the popsicles???? 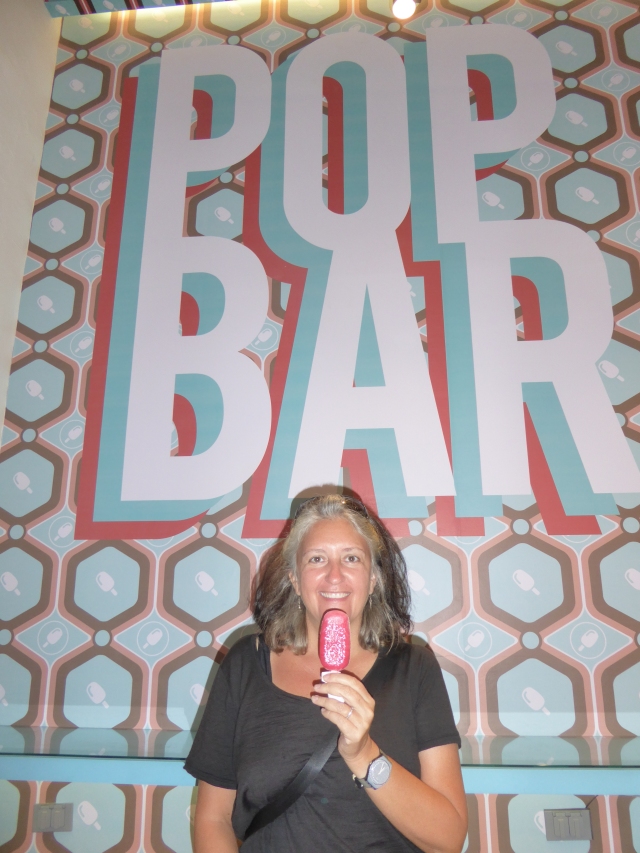 Lisa with a watermelon popsicle

Bottom line, we love it here and can’t wait to come back someday…

Lisa has a degree in biology and another in law and has spent the last 20 years working as a patent litigator. She is a voracious reader of young adult dystopian fiction and watches far too much bad tv. She loves pretty much anything to do with zombies, and doesn’t think there is anything weird about setting an alarm at 6 am on a weekend to stumble to a pub to watch her beloved Chelsea boys. Robert has had many professions, including a chef, a salesman, an IT guy and most recently, a stay at home dog dad. He speaks Italian and hopes to learn Spanish on this trip. He loves nothing more than a day spent sailing, hopes to do more scuba diving, and rues the day he introduced Lisa to football (i.e., soccer).
View all posts by theschneiduks →
This entry was posted in Colombia and tagged cartagena, nature photography, street art. Bookmark the permalink.