The adventure continues in La Fortuna

Posted on September 27, 2015 by theschneiduks

Robert and I tried yet again (unsuccessfully) to kill ourselves yesterday.  After all the hiking in Monteverde, we figured a day spent hanging out in some hot springs was just the ticket.  Nice and relaxing, right?  It was, until we saw the water slides.  The first one had a long curved tube that got you going about a zillion miles per hour and then spit you out into a big cauldron where you spun around a few times and then dropped out of the bottom into a plunge pool.  Robert came out sideways on his first attempt, but came up giggling like a school girl.  On his second attempt, he managed to come out right side up, which convinced me to give it a try.  Bad idea.  Keep in mind that I don’t even like to get my face wet in the shower.  Little did I know that there were streams of water coming down from the ceiling of the tube to keep everything wet — I was gagging before I even got to the cauldron.  And when I dropped out, I swear I got gallons of water up my nose — so much water that my ear got plugged up to the point of being physically painful.  I should have known better, but at least if I die of a brain amoeba anytime soon I will know exactly where I picked it up…

The next set of slides were just normal typical curvy water slides.  Robert decided to do the fast one — you know, the one with a big red danger sign at the top.  On his first attempt, he seriously damaged certain crucial bits. Let’s just say it is a good thing we don’t want children…  But, Robert being Robert, he decided to go down it again.  This time, he somehow got turned upside down in the tube and came out on his belly.  Somewhere in there, he banged his head pretty hard — hard enough that he woke up in the middle of the night with a splitting headache and a lump on his forehead.  Yeah, safety standards are not quite the same in Costa Rica…Oh well, nothing a little Advil can’t cure.

Today, we had a truly relaxing day, floating down a river in a raft.  Because it is low season, we ended up on a private tour, which was quite nice.

Floating down the river

We saw a big crocodile.  Our guide claimed that they don’t eat people because there are so many better food options for them.  Then again, he also mentioned that they are an important part of the ecosystem because they keep the population of tourists down…

And we saw some Jesus Christ lizards.  Apparently, they got this nickname because they can actually run on the water.  Interestingly, the females can run on the water further than the males can.

We also saw some monkeys.  Did you know howler monkeys have white to keep certain important bits cooler (you know, the same bits that Robert damaged on the water slide)???

We also saw butterflies, some iguanas (both in the trees and on land) and a ton of birds, including some toucans (who wouldn’t sit still long enough for photos), a blue heron and  several tiger herons.

One of the pretty butterflies

Part way down the river we stopped at a local family’s house and had homemade bread and cheese.  Plus, we planted trees to help prevent erosion. 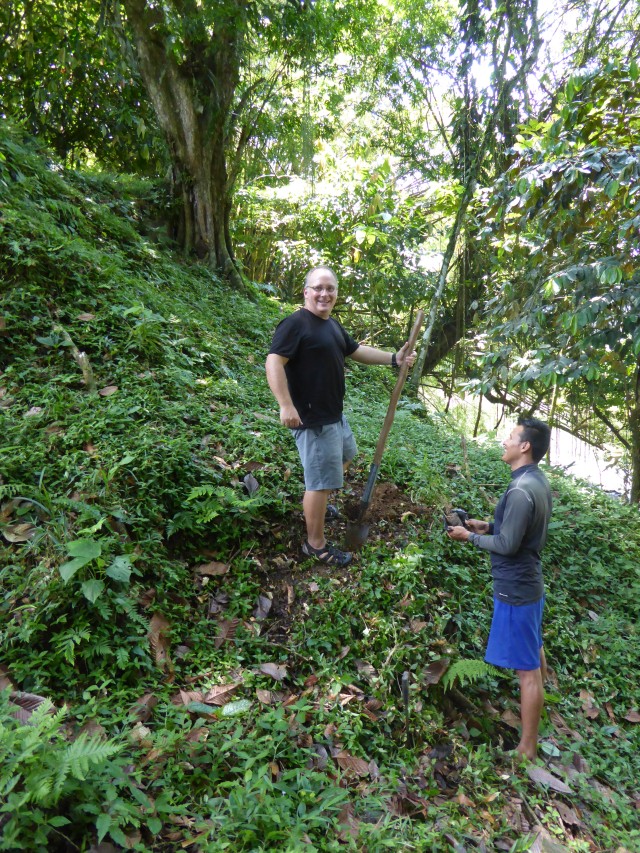 It was a really nice way to spend the morning.

Lisa has a degree in biology and another in law and has spent the last 20 years working as a patent litigator. She is a voracious reader of young adult dystopian fiction and watches far too much bad tv. She loves pretty much anything to do with zombies, and doesn’t think there is anything weird about setting an alarm at 6 am on a weekend to stumble to a pub to watch her beloved Chelsea boys. Robert has had many professions, including a chef, a salesman, an IT guy and most recently, a stay at home dog dad. He speaks Italian and hopes to learn Spanish on this trip. He loves nothing more than a day spent sailing, hopes to do more scuba diving, and rues the day he introduced Lisa to football (i.e., soccer).
View all posts by theschneiduks →
This entry was posted in Costa Rica and tagged la fortuna, nature photography. Bookmark the permalink.