Is it colonial architecture?

Is it beautiful churches?

No, no, no, no and no.  Granada has all of those things, of course.  But the thing you should be thinking about is chocolate.  Because we made chocolate today. 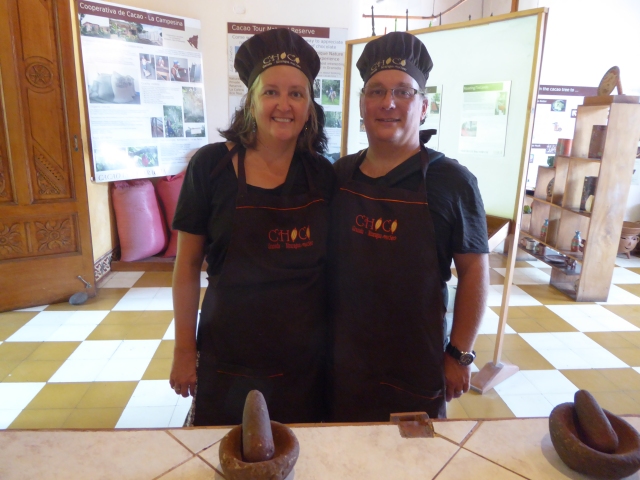 At the chocolate museum

We roasted the beans, ground them up, and mixed up both an ancient Aztec drink (with red pepper, honey and some other stuff) and a Spanish drink (with sugar and milk and vanilla).  Then, we got to create our own chocolate bar flavor and make a chocolate bar.  Cheesy, corny fun, and I loved every minute of it.

(By the way, Granada has watermelon gelato that rivals the best I ever had in Rome, and also has the best frozen lemonade I have ever had — and I don’t even really like lemonade…)

Lisa has a degree in biology and another in law and has spent the last 20 years working as a patent litigator. She is a voracious reader of young adult dystopian fiction and watches far too much bad tv. She loves pretty much anything to do with zombies, and doesn’t think there is anything weird about setting an alarm at 6 am on a weekend to stumble to a pub to watch her beloved Chelsea boys. Robert has had many professions, including a chef, a salesman, an IT guy and most recently, a stay at home dog dad. He speaks Italian and hopes to learn Spanish on this trip. He loves nothing more than a day spent sailing, hopes to do more scuba diving, and rues the day he introduced Lisa to football (i.e., soccer).
View all posts by theschneiduks →
This entry was posted in Nicaragua. Bookmark the permalink.