Off season on Koh Lipe

We “escaped” Malaysia and made our way to Koh Lipe, which is a small Thai island that is actually closer to Malaysia than to Thailand.

Koh Lipe is surrounded by uninhabited islands that make up the Tarutao National Marine Park but is not itself part of the Marine Park.  As best I can tell from my research, the island was settled by sea gypsies from Malaysia some time ago and, because there were residents on the island, the island has been allowed to develop, whereas those around it have not been allowed to develop.  Don’t ask me what a sea gypsy is, as I don’t know. 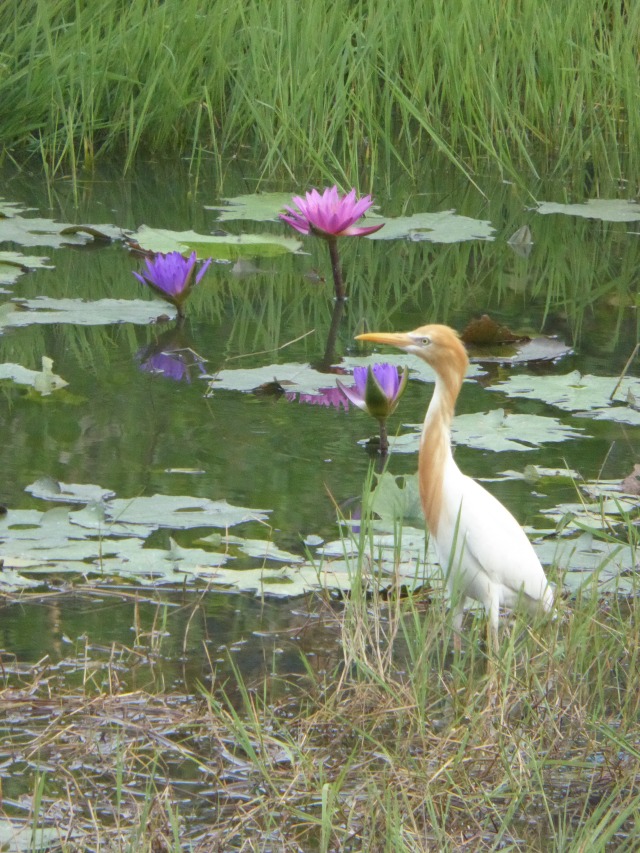 How small is Koh Lipe?    I don’t really know that either.  What I can tell you is that there are beaches on the west, east and south sides of the island and they are each about a 10-15 minute walk from one another.  So it is small.

What I can also tell you is that there is no place for the ferry from Malaysia to even dock.  So, it drops anchor out a bit and everyone clamors into a long tail boat.  Imagine me, trying to jump from the ferry bobbing in the water onto a long tail boat also bobbing in the water with my backpack.  Even I was surprised that I didn’t fall in.  The long tail gets close to shore, but everyone has to jump into the water and walk the last few feet to shore and to the covered pavilion that counts as “immigration.”  So, like I said, it is small.

We arrived at the start of low season.  So, many of the restaurants and bars (and even some of the hotels) are already closed for the season. That said, we found some amazing Thai food (oh, penang curry, how I missed you…) and some pizza that would be right at home in Italy.  And, we found the “yoo hoo” lady who yells out “yoo hoo” as you walk by in an attempt to sell you “pancakes.”  I’m not entirely sure what they are.  They aren’t a crepe, they aren’t an American pancake, they aren’t a roti.  What they are, however, is delicious.  Some sort of bread concoction cooked on some sort of griddle, swimming in ghee, and then slathered with the topping of your choice (in my case, Nutella).  Yum.

Koh Lipe is known for its amazing snorkeling and diving, most of which occurs around the uninhabited islands around it.  Unfortunately, most of the snorkeling trips were unavailable because the National Marine Park closes for the summer to allow the coral a chance to rest and recover after the winter tourism. There were a few companies still offering snorkeling trips, but they were just off-shore.  Thus, we decided not to snorkel.

Hanging on the beach in Koh Lipe

Robert did manage to find a diving trip, and raved about it — he saw box fish, trigger fish, pipe fish and a jellyfish for the first time ever.

Sometimes it seemed like there are more dogs than people here.  But the dogs were very friendly.  It was nice to have a dog at our feet again, happy to have a few scratches behind its ears and a belly rub.

While at first the lack of things to do was a bit annoying, we soon grew to love it here.

Hanging at the beach bar

We found a nice ocean-side bar that played good music and for the price of a drink they let us sit in their chairs and use their umbrellas all day.  And, when we got hot, we just popped into the ocean for a swim.  Not bad, not bad at all.

In fact, when all was said and done, we both decided that we would love to come back during shoulder season, but we both think we would hate it during high season — the peace and quiet was nice and seeing this placed mobbed with tourists probably would not be so fun.

Tomorrow we are off to Ao Nang (another beach in Thailand but on the mainland) where — fingers crossed — we will get some snorkeling in.

Lisa has a degree in biology and another in law and has spent the last 20 years working as a patent litigator. She is a voracious reader of young adult dystopian fiction and watches far too much bad tv. She loves pretty much anything to do with zombies, and doesn’t think there is anything weird about setting an alarm at 6 am on a weekend to stumble to a pub to watch her beloved Chelsea boys. Robert has had many professions, including a chef, a salesman, an IT guy and most recently, a stay at home dog dad. He speaks Italian and hopes to learn Spanish on this trip. He loves nothing more than a day spent sailing, hopes to do more scuba diving, and rues the day he introduced Lisa to football (i.e., soccer).
View all posts by theschneiduks →
This entry was posted in Thailand and tagged koh lipe. Bookmark the permalink.

1 Response to Off season on Koh Lipe