Sitting on the corner eating and drinking

Last night, while waiting for the Chelsea match to start, we planted ourselves on tiny little stools at a street stall, surrounded by locals and tourists alike, and enjoyed one of our favorite activities in Vietnam:  eating.  (Fine, fine, there was some drinking involved too).  I sometimes think eating is a competitive sport over here. There are too many sidewalk stalls to count and the choices of street food are nearly endless.

We started with a rice cracker covered in sesame seeds (with a very spicy dipping sauce) and roasted peanuts.  I am in love with this rice cracker.  It melted in my mouth.  I just might need another one tonight…As for the peanuts, the shells go right on the ground — it felt like I was a kid eating at Ground Round again. 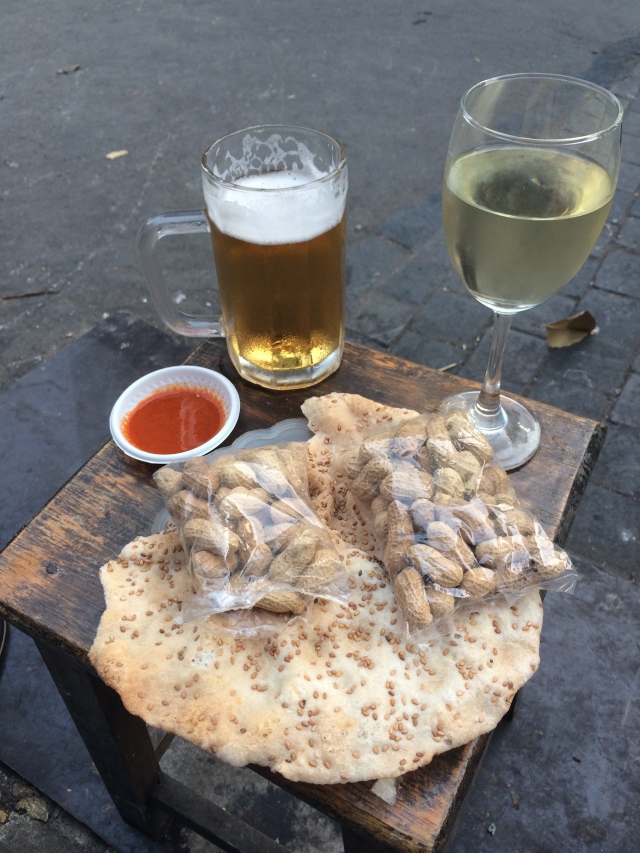 I then moved on to fried corn.  This came from a vendor who pushes around a little cart and fries the corn up to order.  I’m not sure what all is in this concoction, but if I had to guess I would say that the oil used to fry it is coconut oil because there was a coconut taste to it and I know there is sugar.  Normally the corn is fried with onions and shallots, but I managed to get the vendor to leave those out.  The concoction gets all caramelized, turning into the best corn dish ever. 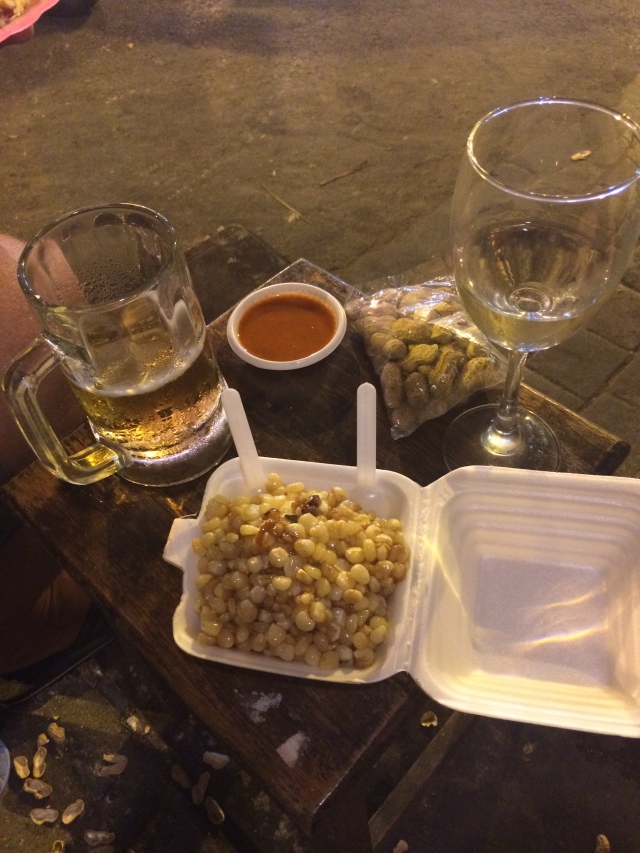 Robert had to try the dried squid. We bought this one from the street stall we were parked at and one of the employees had to go out and find a street vendor selling squid.  Basically, an entire dried squid is salted and lightly grilled and then shredded.  Robert says it is like squid jerky.  He wouldn’t even let me try it because he knew I wouldn’t like it — one smell confirmed his conclusion.

And we finished things off with a “potato storm.”  Basically, potato chips on a stick.  Once again, just like the fries we had the other night, these were coated with some weird orange cheese like substance and sugar.

Everything but the squid was dirt cheap (and even that wasn’t bad), even though I’m pretty sure we paid the tourist price for the corn and the potato chips.  Not a bad way to kill time before a match.  But, tonight, we need to eat a real meal… Right after I get another order of that corn…and an order of fried donuts…and some pho…and Robert has a bahn mi…

Lisa has a degree in biology and another in law and has spent the last 20 years working as a patent litigator. She is a voracious reader of young adult dystopian fiction and watches far too much bad tv. She loves pretty much anything to do with zombies, and doesn’t think there is anything weird about setting an alarm at 6 am on a weekend to stumble to a pub to watch her beloved Chelsea boys. Robert has had many professions, including a chef, a salesman, an IT guy and most recently, a stay at home dog dad. He speaks Italian and hopes to learn Spanish on this trip. He loves nothing more than a day spent sailing, hopes to do more scuba diving, and rues the day he introduced Lisa to football (i.e., soccer).
View all posts by theschneiduks →
This entry was posted in Vietnam and tagged hanoi, street food. Bookmark the permalink.