So…we ended up spending five, yes five, nights in Nha Trang.  I don’t think anyone could be more surprised about that than I was — the town is beyond touristy and it sometimes felt like a struggle to find places that did not cater only to Russian tourists.  Good food was hard to find, and we only made it to one restaurant frequented by locals — although we outdid ourselves that night — not a word of English was spoken in the restaurant and we were the only Western tourists in the place even though it was jam-packed.

Our view from our Nha Trang lounge chairs

But Nha Trang nonetheless has its attractions.  Namely, the beach — for three days in a row we rented a comfortable lounge chair with a huge towel, free wi-fi, a waiter to get us food and drinks, and a great view.  We couldn’t have asked for three better, or more relaxing, days.  Nothing quite like hanging out on the beach and reading a good book under the shade of a giant umbrella.  Although neither one of us can figure out when we became beach people…

Lisa on the Quy Nhon waterfront

After prying ourselves away from our lounge chairs, we made our way by train to Dieu Tri.  Although our train car was close to full, I’m pretty sure we were the only Western tourists on the train.  And the ride was an experience.  First, as the train pulled into the station, we were both quite happy we had paid a bit more for the air conditioned car — the non air-conditioned cars looked like cattle cars with slats along the wall for air and people peering through the slats.  Can’t even imagine a long ride in one of those.

Then, we had to explain in body language to a local guy that he was in our seats.  Got that problem solved (but, seriously, how come we could figure out the seat numbers but a local guy couldn’t?).  I’m pretty sure he was the same guy who proceeded to burp the entire journey.  Have you spent four hours smelling Vietnamese food burps, with the intermingling of fish sauce and garlic and green vegetables?  If not, you don’t want to, trust me on this….

The Vietnamese also love to snack, and vendors were up and down the aisles during the entire ride selling various snacks.  Packaged chips and cookies to start, then roast corn, then dumplings, then rice with various meats. It was actually quite interesting watching everything go by, wondering what would come along next.  If we take another train journey, I’m going to start hungry so I can try some of what they are selling.

And the scenery was stunning.  For most of the ride, we had the ocean on our right and rice fields and mountains on our left.  We went through several tunnels through the mountains, saw cows and water buffalo in the fields, saw numerous people working in the fields while wearing the ubiquitous conical hats, and saw hundreds, if not thousands, of white egret-like birds.  Unfortunately, the windows of the train car were too scratched up and dirty to get any decent shots.  Of course, Robert slept for half of the ride…

After arriving in Dieu Tri, it was time to hop a cab to our current location — Quy Nhon.  Catching a cab is easy — as soon as we walked out of the train station there were ten or so drivers all clamoring for our business.  But if the internet is to be believed, only two of the cab companies are actually reputable — the others regularly refuse to use the meter, go the long way, etc., etc..  So Robert loudly announced as the cabbies were hassling us that we were looking for one of the reputable companies.  You should have watched the drivers scatter.  It was really quite amusing.

Quy Nhon is a town of roughly 300,000 people.  It is not on the main tourist track and I’m not sure why.  There is a great beach here and the ocean seems much calmer than in Nha Trang.  The boardwalk is made of marble — yes marble — and there are marble statues along the way.  And the people are so friendly.  While walking around today, numerous people stopped to say hello, ask us our names, and ask us where they were from — and not a single one tried to sell us anything. 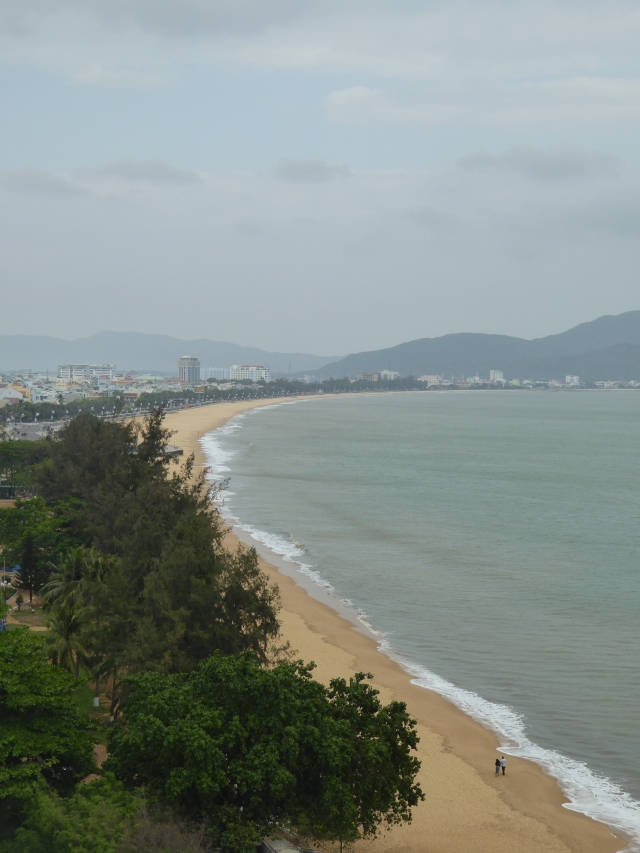 The view from our hotel balcony

The town is also sleepy.  Seriously, sleepy.  Look at these pictures:

Quy Nhon hipster on a fixie

What is missing?  Wait for it….people, cars, trucks and motorbikes!  I have never seen such a quiet place anywhere in Vietnam.

I think we are going to like it here….even if it is for only two days.

Lisa has a degree in biology and another in law and has spent the last 20 years working as a patent litigator. She is a voracious reader of young adult dystopian fiction and watches far too much bad tv. She loves pretty much anything to do with zombies, and doesn’t think there is anything weird about setting an alarm at 6 am on a weekend to stumble to a pub to watch her beloved Chelsea boys. Robert has had many professions, including a chef, a salesman, an IT guy and most recently, a stay at home dog dad. He speaks Italian and hopes to learn Spanish on this trip. He loves nothing more than a day spent sailing, hopes to do more scuba diving, and rues the day he introduced Lisa to football (i.e., soccer).
View all posts by theschneiduks →
This entry was posted in Vietnam and tagged nha trang, quy nhon. Bookmark the permalink.