Getting to Vietnam is NOT half the fun

So…we left Cambodia for Can Tho, Vietnam on Tuesday.  What a nightmare of a travel day….

When we booked our tickets, we were told it would be a 7 hour trip.  In actuality, the trip took over 9 hours and I’m guessing that is par for the course.

Ho Chi Minh in Can Tho

First, we got picked up at 10:15 at our hotel by the most broken down van I have ever seen.  The driver couldn’t even get the doors to open half of the time — he couldn’t even get his own door to open at one point.  And, one of the seats would not stay upright.

Once all the other passengers had been picked up (or so we thought), the van drove to the tourist office and the driver yelled “we wait at the travel office until 11.”  But wait a minute.  We were supposed to leave at 10:30.  Turns out our bus to Vietnam was picking up passengers arriving from Phnom Penh and they were running late.  Finally, we left Kep and made our way to the border where the driver yelled out “passports!”  All of us looked around wondering “do we really just give our crazy driver our passports?”  We did, and he took them up to the Cambodian border control to get us stamped out of the country while we waited in the hot van and looked at the crazy casinos on the border.  When the driver returned, he took a short drive across no man’s land to the Vietnamese border.  There, he yelled “out of van, walk.”  We all looked at each other and thought “you want us to walk across the border and you still have our passports?”  But we did it.  We walked into the Vietnamese border control office and were presented with a health form (a form none of the officials even looked at once we filled it in) and made to pay $1 each.  A complete and total scam (which we knew about).  But there is no way around it.  Meanwhile, the driver waited for Vietnamese passport control to stamp us into the country.  Then, after we got our passports back (sweet relief), we walked a bit further, got the passports checked once again, and hopped back into the broken down van (which had somehow miraculously crossed the border).

A few minutes later, we arrived at the bus station in Ha Tien, Vietnam.  The driver yelled “Ho Chi Minh, Can Tho, out!”  So we climbed out of the van along with several others, collected our luggage and looked around.  The driver yelled “wait here” and drove away…. At this point, we were all wondering what we had gotten ourselves into.  Soon enough, another man came by and yelled “Ho Chi Minh; 1:30.  Can Tho; 2:00.  Sit down.”  So here we were, along with 4 other tourists, sitting in front of the Ha Tien bus station for nearly 2 hours.  In the sun.  With our luggage.  Fun times.  At least the other tourists were nice and had interesting tales to tell.

Finally, 2:00 pm rolls around and we heard “Can Tho” and the man pointed for us to get on the “bus.”  This was a bus like no other.  The seats were tiny — even the Vietnamese people didn’t fit in a seat.  And there was no air conditioning.  None.  And there was a woman taking payment from the locals who yelled at all the locals (but ignored us).  And the bus stopped at random places along the side of the road to let people on and off.  And the driver smoked throughout the trip.  And, we are pretty sure the gas tank leaked — shortly after we stopped for gas the floor of the bus was wet with some sort of slippery substance and Robert kept smelling gas.  Did I mention the bus driver smoked?  And the best part?  The absolute best part was that the bus had no shocks.  None.  Do you remember those exercise machines from the 1970’s where you wrapped a conveyer belt around your belly, turned on the machine and stood there and shook?  Well, if those things worked, Robert and I would have each lost at least 100 pounds.  The only positive thing I can say about that bus trip is (1) there was no loud music and (2) we didn’t vomit.

Robert in Can Tho

We finally made it to Can Tho, Vietnam around 8 pm.  We hopped a taxi to our hotel, dropped everything and immediately left for dinner.  Neither of us had anything to eat yet that day, and the only thing we had to drink was water.  So we decided we were going to eat at the very first restaurant that looked edible.  Guess what it was.  Wait for it.  PIZZA!  I’m not sure how I got that lucky.

We are both enjoying Can Tho now that we are here.  It is a large city in the Mekon Delta (about 1.5 million people), but doesn’t feel like one.  Our hotel is right on the river and we have run into several people we met in Cambodia, which has been fun.

The first thing on our agenda in Can Tho was a street food tour.  The tour cost nothing except the cost of the food and a tip for the guide at the end of the night and was a good introduction to the food of the delta.  We went to four different places.  The first served iced green tea and nem muong, which is a make-your-own rice paper wrap.  The fillings included pork sausage, cucumber, banana, pineapple, rice noodles, pickled carrots, lotus root, lemongrass, and various herbs.  We both liked it, although I liked mine best without the pork sausage.  (I’m a firm believer that the only meat that should be chopped up and squeezed back together is hamburger…).  The next stop was for banh cong, which is a cake made of pork and green beans that you eat wrapped up in lettuce along with various herbs.  Robert loved it; me not so much. 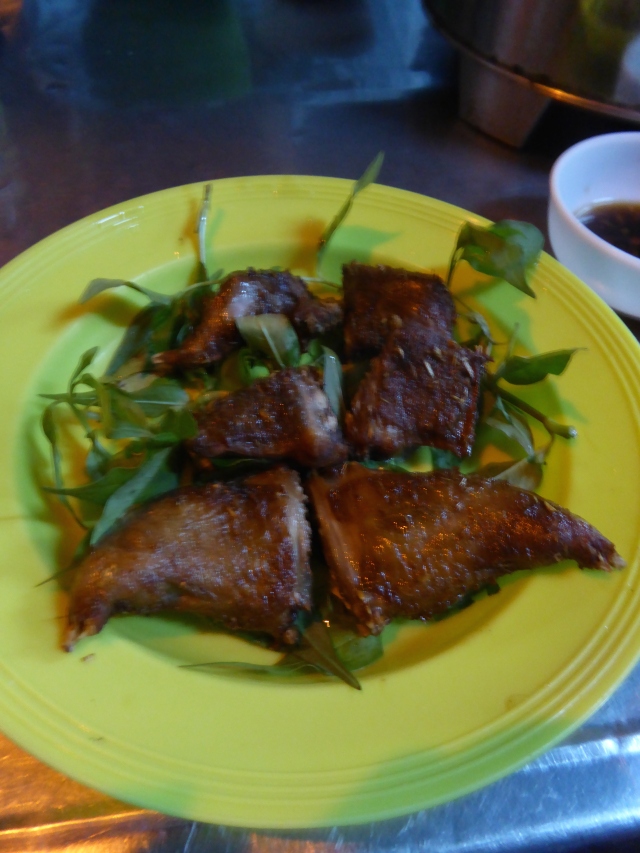 The third stop was for beer, grilled field mouse, grilled frog and a pork/eggplant dish.  The mouse was quite good in all honesty (and check out how big those hindquarters are!), although it was a bit difficult to eat because it was served with all the bones.  Who knew mouse ribs were so small!  And the frog was amazing.  Lastly, we stopped for a sticky rice dessert.  It was basically sticky rice, peanuts, sugar and coconut wrapped in a very skinny waffle.  Delicious!  And, our guide helped me buy a pomelo (like a sweet grapefruit) at something at least close to local prices.  Can you guess how much all of that food and beer cost us?  No, you can’t.  It was under $13.  Unreal!

Next on the agenda is a tour of the floating markets.  Details to follow…

Lisa has a degree in biology and another in law and has spent the last 20 years working as a patent litigator. She is a voracious reader of young adult dystopian fiction and watches far too much bad tv. She loves pretty much anything to do with zombies, and doesn’t think there is anything weird about setting an alarm at 6 am on a weekend to stumble to a pub to watch her beloved Chelsea boys. Robert has had many professions, including a chef, a salesman, an IT guy and most recently, a stay at home dog dad. He speaks Italian and hopes to learn Spanish on this trip. He loves nothing more than a day spent sailing, hopes to do more scuba diving, and rues the day he introduced Lisa to football (i.e., soccer).
View all posts by theschneiduks →
This entry was posted in Cambodia, Vietnam and tagged can tho, food tour, street food. Bookmark the permalink.

1 Response to Getting to Vietnam is NOT half the fun